Japan and World War I

A Forgotten Tale of World War I: Life for German POWs in Japanese Camps

Politics Aug 27, 2014
At the outset of World War I Japan waged a short, successful campaign against German forces in China, taking thousands of prisoners of war, who went on to spend more than five years in camps in Japan. Documents and photos from the period reveal the surprisingly livable conditions of these World War I camps.

This year marks the hundredth anniversary of the start of World War I. People in Japan generally think of it as a European war, and they rarely discuss it, perhaps because the events of World War II weigh so heavily on their memories. And the fact is that although both conflicts are called “world wars,” they were fundamentally different in scope.

Japan participated in World War I as one of the Allied Powers, but its effective involvement was largely limited to the campaign against forces defending Germany’s concession at Qingdao (Tsingtao) in China. This 1914 campaign ended with the Germans’ surrender after a month and a half, at which point Japan found itself with 4,700 prisoners of war. They were dispersed to camps in 16 locations around Japan where they would be held for more than five years. Today their story has been almost forgotten.

POWs “Must be Humanely Treated”

Strictly speaking the prisoners of war were not all German, as they included Austrians, Hungarians, Czechs, Poles, and others. However, as the vast majority were German, here I will refer to them collectively as “German POWs.”

At that time, the rules for treatment of prisoners of war were as stipulated in the Convention Respecting the Laws and Customs of War on Land, part of the Hague Convention, which was signed on October 18, 1907, and promulgated by Japan on January 13, 1912. Chapter II, Article 4 of the annex to the convention states that prisoners of war “must be humanely treated.” Ten years after its victory in the Russo-Japanese War of 1904–5, Japan wished to be seen as a civilized nation by the Western powers, and it made efforts to comply strictly with international law in handling the German prisoners. This meant ensuring that there was no abuse or forced labor in any of the camps.

An incident did take place on November 15, 1915, involving Masaki Jinzaburō, the commander of the camp in Kurume, Fukuoka Prefecture. To celebrate the enthronement of Emperor Taishō, each prisoner was specially presented with one bottle of beer and two apples. When two officers refused them on the grounds that Japan and Germany were at war, the enraged Masaki struck them on the cheek. The prisoners in the camp protested vigorously at this infringement of the Hague Convention’s banning of abuse against POWs, and they demanded a visit from the embassy of the still-neutral United States. The incident blew up into a major issue, and Masaki was dismissed from his position in short order. However, occurrences of this sort were rare. Although there were minor flare-ups between lower-ranking guards and prisoners, there was almost nothing that could be described as abuse.

Photograph 1 shows German officers posing together with their Japanese captors at the camp in Marugame, Kagawa Prefecture. The picture is believed to have been taken on the occasion of the retirement of Colonel Ishii Yashirō, the camp commander, at the beginning of April 1916. Ishii, seated in the middle of the front row, looks rather huddled up, perhaps because of his sickly constitution, while the Germans on either side of him appear imposing and sit at ease with their legs crossed, looking not at all like prisoners. This picture expresses one aspect of the POWs’ treatment.

Photograph 2 is of POWs at the camp in Nagoya. It is not known when the picture was taken, but the clothes suggest that it was winter. The prisoners have found a sunny spot in a room in the camp, where they sit in relaxed poses. They certainly do not appear to be cowering under harsh discipline. 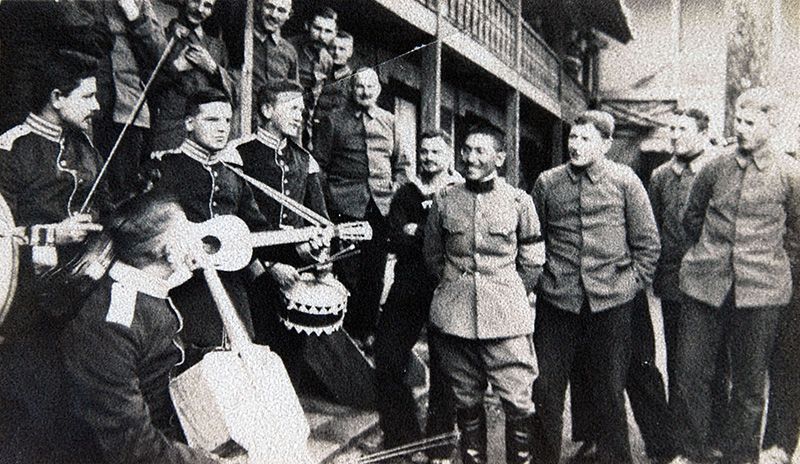 Photograph 3 (Courtesy of Kurume Board of Education)

Photograph 3 was taken at the camp in Kurume, Fukuoka Prefecture, on January 27, 1915, when the prisoners were celebrating the birthday of German Emperor Wilhelm II. The picture shows Lieutenant Yamamoto Shigeru, one of the camp officers, chatting with the prisoners. Yamamoto had studied at a military academy in Germany and was fluent in German. A former POW’s diary records that Yamamoto brushed up his language skills by exchanging Japanese lessons for German lessons with one of the prisoners. Although there are many pictures of Japanese and German officers together, very few show them smiling like this.

Among the rules given in the Hague Convention, I will present three that seem unusual today.

Article 10: Prisoners of war may be set at liberty on parole if the laws of their country authorize it.

The idea of releasing POWs on the promise that they will take no further part in fighting appears very strange now, but 100 years ago it was among the provisions of international law. Here is an example of a parole pledge from a POW on Belau (Palau) in the southern Pacific, which was a German colony until it was taken by the Japanese during World War I:

“I, the undersigned, solemnly declare that throughout the current war I will not join the German armed forces again under any circumstances. Palau, [month] [day], 1914.”

Within Japan too, several POWs in Fukuoka were released on parole at an early stage. And when the armistice ending World War I was signed on November 11, 1918, POWs of various nationalities, such as ethnic French from Alsace-Lorraine, Italians, Poles, and Czechs were successively paroled. Ultimately almost 100 prisoners were released in this way.

Article 16: Letters, money orders, and valuables, as well as postal parcels destined for the prisoners of war or dispatched by them, shall be free of all postal duties both in the countries of origin and destination, as well as in those they pass through.

The number of letters or postcards each prisoner could send depended on rank, with average monthly allowances of five for officers, three for noncommissioned officers, and two for rank-and-file soldiers. These could be sent not only back home but also between prison camps. Including correspondence sent to prisoners from Germany and other home countries, it is estimated that more than a million items were sent free of postage over the five years that the prison camps were in operation. In fact, research into German POWs and prison camps in Japan began with the work of postal hobbyists who collected prisoners’ letters.

Article 17: Officers taken prisoner may receive, if necessary, the full pay allowed them in this position by their country's regulations, the amount to be repaid by their Government.

Saigō Toratarō, the commander of the camp in Tokyo, had the following to say about treatment of prisoners. “Pay for prisoners follows a standard of ¥183 a month for army lieutenant colonels, ¥47 for lieutenants, ¥40 for second lieutenants, ¥40 for warrant officers, and 30 sen [¥0.30] a day for noncommissioned officers and below. These figures are all based on rates for Japanese soldiers. . . . This pay is in line with regulations for treatment of prisoners of war, and is intended purely to preserve the honor of soldiers.” He goes on to add that officers, who receive monthly payments, are responsible for covering all costs relating to food, clothing, and accommodation. However, they would be provided with snacks and other consumables—mandarin oranges, cookies, coffee, cigarettes, and such—as they wished.

The highest pay figure in Saigō’s list is ¥183 a month for army lieutenant colonels, since that was the highest rank among the POWs in Tokyo. But the official pay schedule included larger monthly amounts for the top ranks: ¥240 for army colonels and ¥262 for navy captains. Based on consumer price comparisons and other factors, ¥200 at the time of World War I was equivalent to approximately ¥1.6 million (US$16,000) in today’s money. As the starting monthly salary at the time for employees at major banks was around ¥40, we can see that senior officers were very well paid indeed.

Article 6 of the annex to the convention concerned labor by prisoners of war.  This may conjure up images of forced labor, but the work was not of that nature at all. The article stated, “Prisoners may be authorized to work for the Public Service, for private persons, or on their own account. . . . The wages of the prisoners shall go towards improving their position.” In an October 1916 document recording a speech by the head of the Bureau of Military Affairs at a meeting of camp commanders, a section on prisoner labor reads as follows.

“Because of the need for labor by prisoners of war, . . . ways of allowing prisoners with skills that can benefit the development of Japanese industry to work outside camps were submitted last year to a meeting of vice-ministers from all the ministries; the various ministries have decided on workplaces, methods of employment, wages, and supervision.”

Prisoners who worked were paid wages. For lower-ranking soldiers it was a good way to save a little money and also offered the excitement of getting out of the camp. Construction and similar labor was not common; most of the work was skilled. The various jobs ranged from food-related positions such as milking cows and manufacturing ketchup, bread, and sausages, to installing boilers at machine factories and providing guidance at rubber manufacturers.

After they were released, some of the former POWs were hired to stay on in their jobs at stupendous monthly salaries of ¥300 or more.

Prisoners undertook many activities in the camps. The authorities only required that they be present at morning and evening roll call; the rest of the time they were free to do what they wanted. One former POW wrote in his diary, “The greatest enemy at the camp was boredom.”

As the war in Europe continued with no end in sight, the Germans maintained their military order within the Japanese camps. They probably thought it was unhealthy psychologically and physically for young soldiers to idle their days away. So a plethora of classes, lectures, sports events, plays, concerts, and other activities were organized at the Germans’ own initiative.

The POW camp at Bandō in the suburbs of Naruto, Tokushima Prefecture is famous as the location for the first performance in Japan of Beethoven’s Ninth Symphony, “Ode to Joy.” Prisoners at this camp had a great deal of freedom compared with those at other camps and even went on hikes and bathed in the sea. Matsue Toyohisa, the camp commander, was a descendant of samurai from the former Aizu domain, which took the side of the Tokugawa shogunate in its unsuccessful resistance against the forces supporting the Meiji Restoration of 1868. As such, he was inclined to show understanding and consideration to the defeated Germans. While punishments for rule infractions and quarreling between soldiers were commonplace at other camps, they were extremely rare at Bandō. This demonstrates Matsue’s humanitarian spirit. 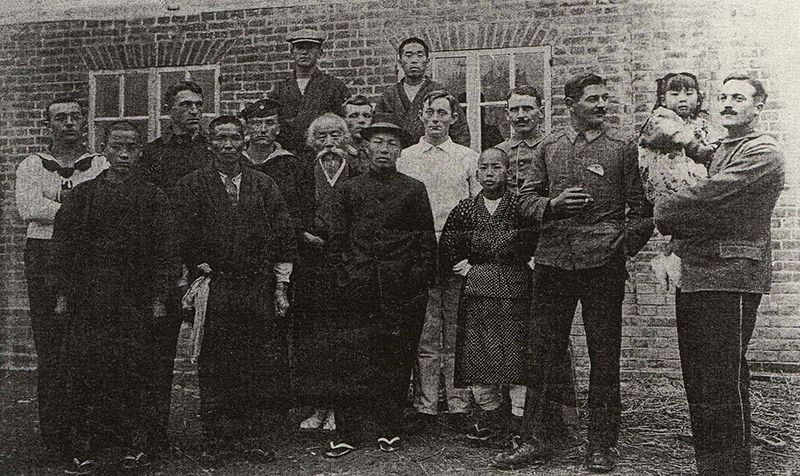 Photograph 4 is a commemorative picture taken in front of Tomita Dairy (now known as the “German Barn”) near the Bandō camp around December 1919, when the prisoners were soon to be released. The building was constructed by 30 men, a mixture of prisoners and local carpenters, working together. On the far right of the photograph, one prisoner is holding a little girl in his arms, while another, holding a cigarette, looks on smiling. Nothing in this scene gives the slightest impression of the Germans as being POWs. We may see this as another piece of evidence that Japan treated the prisoners humanely and in scrupulous keeping with international law.