Can’t Help But Sing of Joy

Society Lifestyle Jan 29, 2013
Year-end performances of the Ninth Symphony are held annually all over Japan, far from Beethoven’s homeland. Odder still, in Japan the chorus is almost always sung in German. What is it about the Ninth that casts such a powerful spell? The writer dropped in on a choral rehearsal to find out.

A New Year’s Tradition All Over Japan 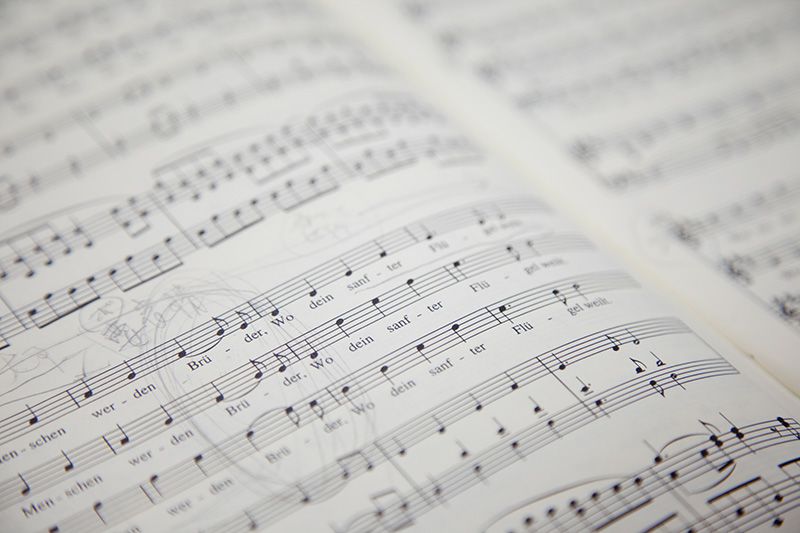 Score for the choral section of Beethoven’s Ninth.

Beethoven’s Ninth Symphony is famous throughout the world. It’s so well known in Europe that “Ode to Joy,” the main theme of the fourth movement, serves as the official anthem of the European Union. In Japan this work is so thoroughly renowned that it’s referred to simply as Daiku, “the Ninth,” and it elicits a degree of veneration here that must surely seem odd to people from other countries.

The prevalence of Ninth mania among the Japanese can be seen in the frequency with which the work is performed and in its huge number of fans. The symphony is performed in virtually every corner of Japan at the end of each year. There are as many as 150 of these year-end performances, staged by organizations ranging from national orchestras like the New Japan Philharmonic, led by Honorary Conductor Laureate Ozawa Seiji, to amateur choral groups. In recent years highly elaborate productions involving up to 10,000 singers have also become popular. There are community-based choral groups that have been performing the Ninth annually for more than four decades, demonstrating that its appeal endures through successive generations.

The lyrics to “Ode to Joy,” taken from a poem by Friedrich Schiller, have been translated into Japanese and other languages, but Japanese fans of the Ninth are very particular about having it performed in the original language. In Japan, therefore, the chorus is virtually always sung in German. Since German is a foreign language, this poses something of an obstacle when it comes to memorizing the lyrics, but Japanese singers have come up with lyrics in their own language that, although nonsensical, closely approximate the sound of the original German. Under this scheme, for example, the first two words of the famous chorus, “Freude, schöner,” are sung as a Japanese phrase meaning “getting out of the bathtub, sleeping to a poem.” Consequently, Japan is regarded by some as the nation where more people sing the Ninth and fewer know what they’re singing than anywhere else in the world. 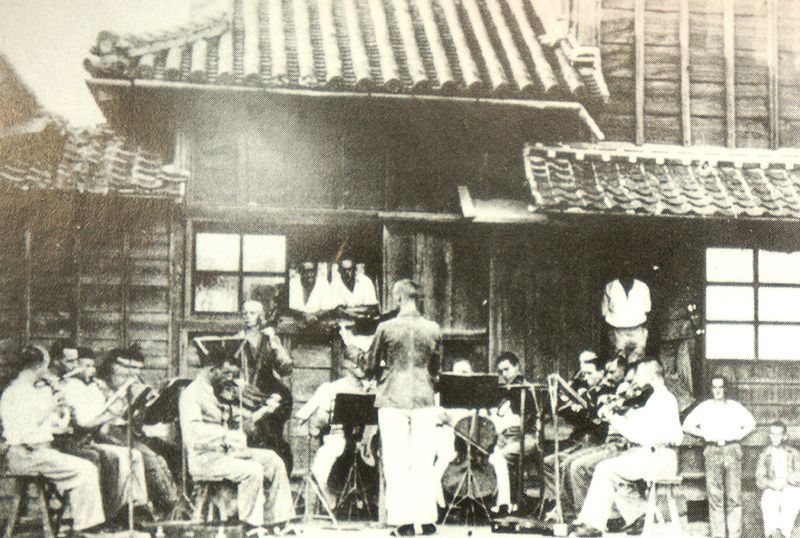 The very first performance of the Ninth in Japan was by German prisoners. In 1918, during World War I, an orchestra and chorus at the Bandō Prisoner of War Camp in the city of Naruto, Tokushima Prefecture, performed the entire symphony. The first performance by Japanese musicians and singers took place at the Tokyo Music School (a forerunner of the modern-day Tokyo University of the Arts) in Tokyo’s Ueno district, as the forty-eighth installment of the school’s regular concert series.

Various theories have emerged to explain how the Ninth came to be performed at the end of the year. According to one, during World War II the fourth movement was performed in December as part of the ceremonial sendoff for students drafted into the army, and after the war the year-end performance became a traditional requiem for students who had perished on the battlefield. Whatever the explanation, the Ninth, and the overwhelming sense of euphoria imparted by its final movement in particular, clearly strikes a resounding chord with the Japanese, who tend to place great importance on wrapping up the year properly and giving it a heartfelt sendoff.

A Passionate Following Among Young and Old

Around the middle of November, I dropped in on a group of people rehearsing for a performance of the Ninth in the Ueno district of Tokyo, the site of the very first performance of the work by Japanese players and singers. This was the Taitō Chorus, established more than 30 years ago in Tokyo’s Taitō Ward. The “Taitō Ninth” is an annual event, performed in collaboration with an orchestra from Tokyo University of the Arts. 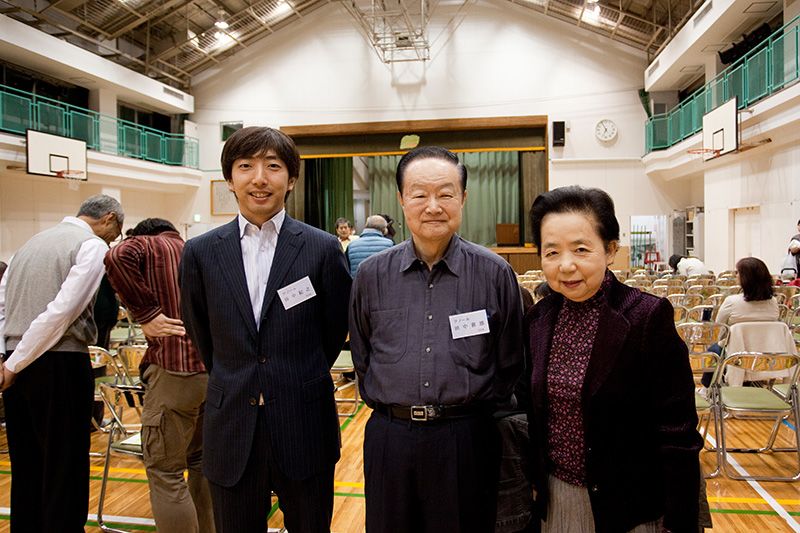 The Tanakas (from left): Noriyuki, Yoshio, and Tamiko. 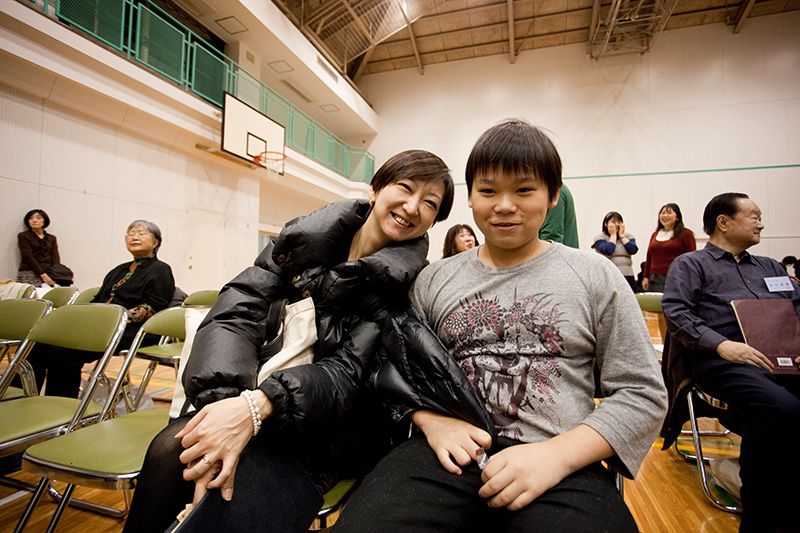 From left, Fukashiro Miho and her son Taiki.

It’s a little after 6:30 in the evening. The group has gathered in its rehearsal space, a junior high school gymnasium. Tanaka Yoshio, a chorus member who lives nearby and who has been singing with the group for the past decade, is in attendance along with his wife and son. “It’s fun for the family to have more in common to talk about,” says his wife, Tamiko. The Tanakas’ eldest son, Noriyuki, will be taking part in the Taitō Ninth for the first time. Standing with his parents, still in his business suit after a day at the office, Noriyuki says he had to make sure all his work was finished up properly to ensure that he could attend the rehearsal.

There are children here as well, easily spotted among the largely middle-aged gathering. Fukashiro Taiki is only a sixth-grader but he’s nevertheless a veteran of the Ninth, having performed it a total of four times, including with other groups. He knows the German lyrics by heart. Other choral works don’t interest him, but he loves the Ninth “because it gives you such a feeling of accomplishment.” For Taiki’s mother, Miho, the forthcoming performance will be her sixth. Finding herself depressed in the aftermath of the Great East Japan Earthquake, she turned to singing and was drawn once again to the charms of the Ninth. “The soprano part is hard—it goes on and on in the upper register. It’s like an athletic event,” she says, laughing. The Fukashiros, who don’t live in Taitō Ward, travel more than an hour to attend the weekly rehearsals.

When the Taitō Ninth was first performed in 1981, it was intended as a means of re-energizing Taitō Ward, which includes Asakusa and other districts where the culture of shitamachi—the old, low-lying section of the city near Tokyo Bay—lives on. This is an area where traditional performing arts still flourish and where singing and dancing have long been familiar pastimes. The Taitō Ninth was originally conceived around the same time as the Asakusa Samba Carnival, another long-running event still held annually. The Ninth was already well known all over Japan at the time, but a performance by an amateur choral group was still a novel phenomenon. In addition, Taitō Ward’s artistic roots were in traditional Japanese performing arts, not Western music. It was considered a bold challenge for shitamachi folk to tackle a work like the Ninth. 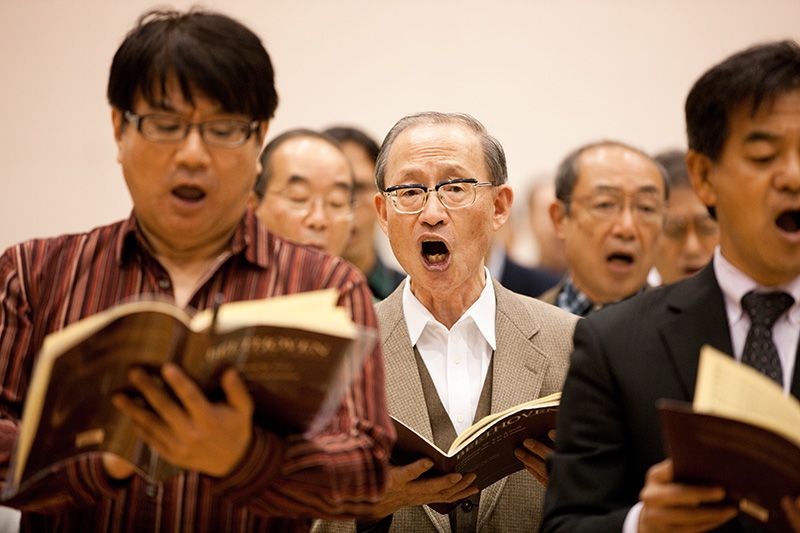 Tone Kunitake (center). “I decided to be self-employed so that I could concentrate on the chorus.” 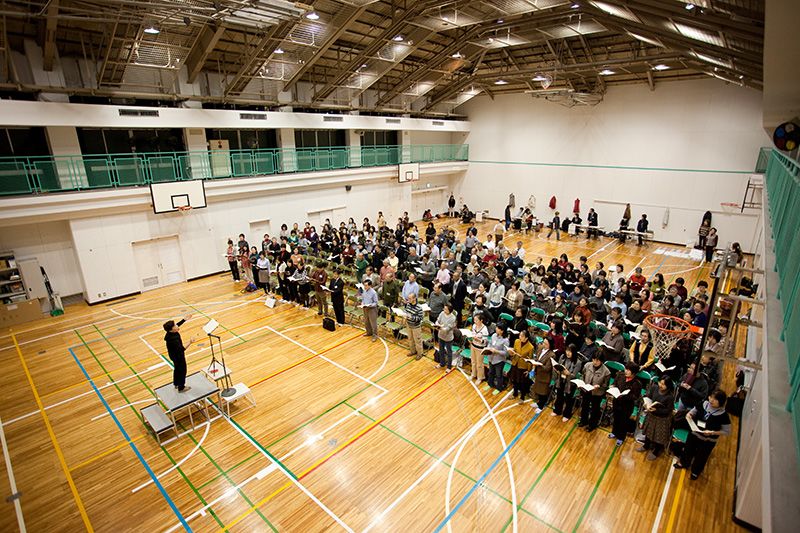 Around 200 people attended this rehearsal.

“The first year we drew 170 people. I thought there were some odd voices in the mix, and it turned out that a number of people were singing they way they do in traditional Japanese music,” recalls a nostalgic Tone Kunitake, leader of the Taitō Chorus, who has been with the group since its inaugural performance.

The original Taitō Chorus was made up of the people who came together for that first performance. The current group has about 80 members, ranging from people in their twenties to those their eighties; most are middle-aged. They work on a variety of choral works throughout the year. The group conducts a concerted recruiting campaign in the lead-up to the annual performance of the Ninth, transforming itself into a large-scale enterprise with as many as 250 singers. According to the Taitō Ward government, which handles administrative duties for the chorus, large numbers of applicants answer the call virtually every year, including people from outside the ward. This year, as in others, new members were selected by lottery. 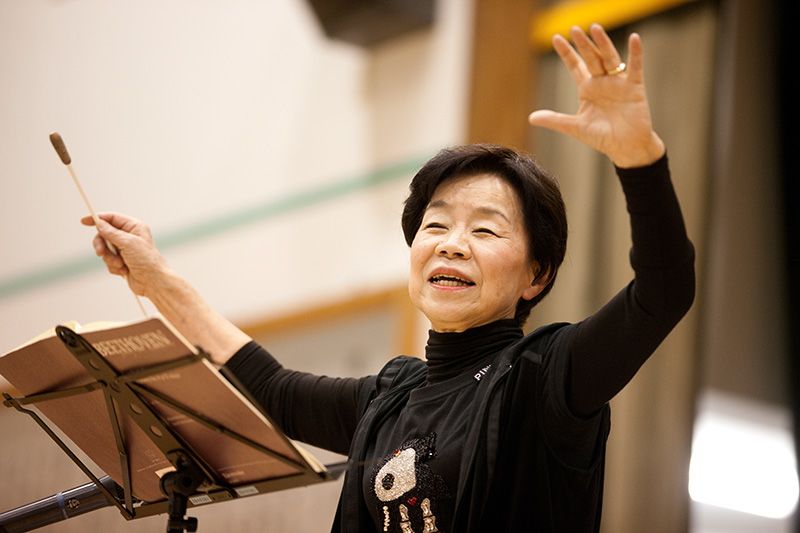 “Okay now, stand tall and project your voice forward. No looking down!” The lighthearted voice of Matsuura Yukari, conductor of the chorus, rings out in the gymnasium. She has been leading the group ever since the early days. In the beginning most of the singers were unfamiliar with Western music, so Matsuura had to start from scratch, teaching them how to read sheet music and project their voices and explaining the passion underlying Beethoven’s famous work. Her skill as a conductor is well recognized. Among other accomplishments, only eight years after it was founded the chorus took the top honors in its very first competition.

“In the fourth movement Beethoven brings in the human voice as a type of musical sound, and for that reason the singing should sound like a musical instrument. It’s not easy to do. But I don’t want them to think that just because they’re amateurs, they don’t need to try harder—I want us to aim high,” Matsuura says.

The group rehearses not only under the direction of its conductor but also with vital support from its pianist, Ōno Sanae, who has worked with the chorus every year since 1989. Explaining how she applies her ingenuity as a professional, she says, “The chorus will actually be performing with an orchestra, so I try to put the tone colors of an orchestra into the piano accompaniment at rehearsals.” 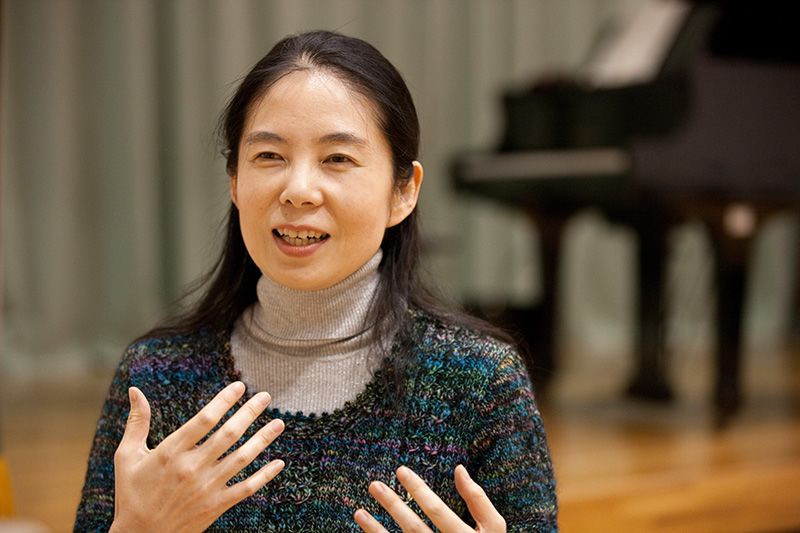 From September on, more than 200 singers come together and rehearse with their conductor and pianist for more than three months, in preparation for a single performance. Beyond that lies the promise of big moments performing with other orchestras and vocalists. The Ōhashis, Yoshirō and Kumiko, are a married couple, both veterans of the Taitō Ninth. Asked what the attraction is, they explain with evident enthusiasm that it’s simply thrilling to be able to sing with an orchestra every year. After all the relentless rehearsing, the performance of the Ninth is a happy ending. For the people gathered here, it will be the transcendent grand finale to many hours of hard work with their comrades and to a magnificent work of music, and the moment that renews the desire to perform it again the following year. From the expressions on their faces, it seems they can’t help but sing of joy.

The 32nd annual performance of the Taitō Ninth, entitled “The Ninth in Shitamachi,” took place December 15, 2012, at Sōgakudō Concert Hall, Tokyo University of the Arts, in Tokyo. A video recording of a portion of the performance is presented below.