Politics Science Technology Society Dec 10, 2014
Average global temperatures have stabilized since the turn of the millennium, but this does not mean global warming has come to a halt. Latest geophysical research reveals that heat is being absorbed by the sea and that the resulting warming of the oceans could bring climate change of even greater ferocity.

Has the Globe Stopped Warming?

When global warming first caught the world’s attention, it caused a great stir. As competing claims subsequently emerged, though, growing numbers began voicing skepticism about the warming trend. Indeed, average world temperatures have shown almost no change over the past 16 years. But can we conclude from this that global warming has come to a halt?

The truth of the matter is that after continuing to rise for years, temperatures have plateaued and entered a period of hiatus. This has been a source of great mystery for scientists the world over, but the mechanisms are now becoming clear. It appears that the oceans have been absorbing excess heat in a very dynamic way, with the result that atmospheric temperatures have been prevented from rising much further.

This means that while air temperatures have been holding steady, the oceans have gradually become warmer. The most commonly cited manifestations of global warming are progressively higher air temperatures, the melting of Arctic ice, and rising sea levels. But far more threatening is the warming of the Earth’s oceans, which, at a glance, does not appear so serious. Higher ocean temperatures, though, are the primary culprits behind the increased frequency of global-scale climatic changes, and they are the root cause of the abnormal weather conditions that have become more pronounced all over the world.

Although the lower layers of the troposphere—that is, the part of the atmosphere closest to the surface of the Earth—are currently not getting much warmer, there has been a marked rise in ocean temperatures. This will soon make itself felt, as the seas soon stop being a “coolant” for the planet and instead turn into a “hot-water bottle.” Rather than absorbing atmospheric heat, as has been the case for the past dozen or so years, the sea will become a source of added warmth. Climate change is likely to accelerate, leading to far greater prevalence of abnormal weather conditions.

The big question is when this is likely to happen. And the bad news is that it could be quite soon.

Let me explain. Temperatures have not changed in the higher layers of the Earth’s atmosphere. This is because the energy from the sun and the energy being released from the atmosphere are in balance. But the lower layers are getting warmer due to the greenhouse effect, and this heat has caused the melting of Arctic ice, as media reports have played up. Even more conspicuously, though, it has steadily been building up in the Earth’s oceans.

The sea is capable of absorbing an enormous amount of heat, so the resulting changes are not so visible. But measurements of global surface water temperatures up to depths of around 3,000 meters (albeit using a limited sample) reveal that they have risen an average of 0.04 degrees Celsius over the past half century. This might seem like an insignificant change, but it is equivalent to a rise of 40 degrees were the lower tropospheric layers to absorb the same amount of heat.

The Mechanisms of Indian Ocean Warming

Cumulus cloud formation is active in waters near Indonesia, meaning that the Indian Ocean is generally warmer in the east and cooler in the west. But sometimes this pattern is reversed, caused by the warming of western waters. This is something I discovered while analyzing the causes of Japan’s scorching summer in 1994, and I named this condition the “dipole mode.” Subsequent research has led to a fine-tuning of this concept whereby the condition in 1994—when the east-west pattern is reversed—is called a “positive” dipole. This is a condition, like El Niño and La Niña in the Pacific, that has been a cause of irregular weather in places around the world.

Why do oceanic temperature patterns cause abnormal weather? This can be explained by looking at normal atmospheric and oceanic patterns near the equator in the Pacific. Sunlight here hits the water surface at a near right angle, generating the highest amount of heat per unit area. As warm air rises, air from other parts of the lower troposphere converges, producing wind. This wind is subject to the law of the conservation of angular momentum and loses velocity, giving rise to an easterly component in global wind patterns.

These easterly winds pull warm surface water westward, which stagnates once it runs into land masses in the western Pacific, such as the islands of Indonesia and the Philippines. This produces a comparatively warm “pool” of seawater that generates ascending air currents, further drawing in air from surrounding areas. On the other side of the Pacific, cooler water springs up, so surface temperatures are relatively low. This is the normal pattern around the equator in the Pacific.

If, for some reason, the relatively warm pool of seawater moves east, this will result in a shifting of “poles,” with the pockets of cool water moving as well. This will affect the direction in which air flows and, consequently, where rain clouds form.

Such a shifting of “poles” in the Pacific is called El Niño, and a similar east-west shift in the Indian Ocean is called the negative dipole mode.

Conversely, the condition in which the normal east-west pattern is further accentuated, with colder-than-normal pockets of water in the eastern Pacific, is called La Niña. The corresponding name for the phenomenon in the Indian Ocean is the positive dipole mode.

Recently, there have been cases where pools of warm and cool seawater appear not at the eastern and western edges of the Pacific but in the middle. This is a condition that I have named El Niño Modoki (Pseudo El Niño) and La Niña Modoki (Pseudo La Niña), respectively.

These are the three major patterns of climate variability. Closer examination has recently revealed that these conditions occur not just on the scale of the Pacific and Indian Oceans but also in limited areas within major seas. Examples include the California Niño/Niña off the western US coast and the Ningaloo Niño/Niña west of Australia. 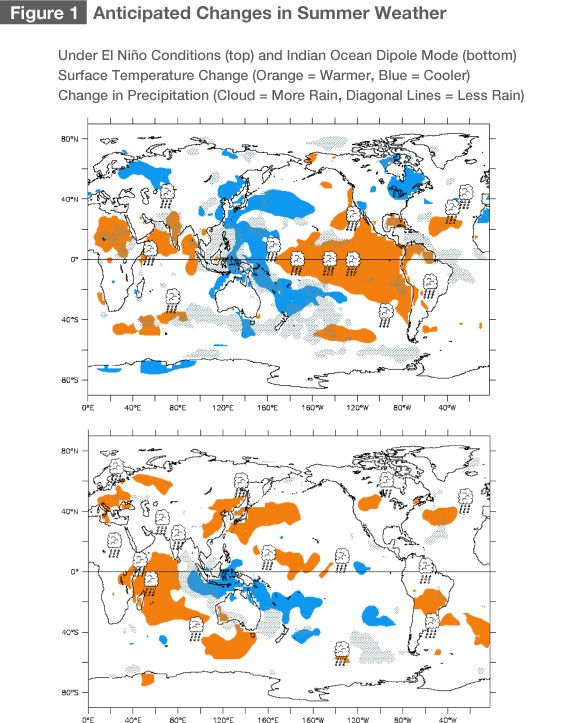 Japan has been plagued by hot, scorching summers in recent years. In 2013, over 900 people died of heatstroke—a toll on a par with natural disasters. Heat waves are no longer isolated incidents but have become the norm. Even hotter than 2013 was 1994, when more “extremely hot days” (35 degrees or higher) were recorded; this was followed by 2010. A positive Indian Ocean dipole caused sweltering heat in 1994, while a simultaneous negative dipole in the Indian Ocean and a Pacific La Niña—resulting in warmer-than-usual water temperatures in the eastern Indian Ocean and the western Pacific—was responsible for the hot summers in 2010 and 2013.

A positive Indian Ocean dipole results in hotter-than-usual summers in Japan and around the Mediterranean, while India and east African countries receive greater rainfall. Grain-growing regions in southwest and southeast Australia, by contrast, are usually hit by drought. In August 2003, a dipole resulted in a scorching heat wave in France, as consecutive 35-plus-degree temperatures caused over 2,000 deaths from heatstroke. After the dipole suddenly disappeared in the middle of the month, daily highs did not even reach 30 degrees. Another typical dipole in 2006 caused serious drought in Australia, while dry, hot weather in Borneo and Sumatra gave rise to large-scale forest fires. Eastern Africa, meanwhile, received torrential rainfall, causing floods in Kenya that affected more than one million people.

El Niño Summers in Japan Are Cool and Dry

An El Niño in the Pacific usually leads to a cool, dry summer in Japan, heavy rainfall along the South-Central American coast, and drought in India. The reverse is true in the case of La Niña; the unusually hot summers in Japan in 2010 and 2013 were caused by La Niña, as there was little impact from a dipole. The sweltering summer of 2007 was caused by a combined La Niña and dipole and resulted in many heatstroke victims. Record snowfall in winter 2005–6 along the Sea of Japan coast was also caused by La Niña.

In 1993 there was both an El Niño and a negative dipole. The harvest in northern Japan was poor due to the cool summer, and the shortage of domestic rice prompted the government to open the market to imports. The 1993 harvest in North Korea was similarly poor, and the heat wave the following summer decimated the country’s economy, creating a security crisis on the Korean Peninsula.

The Modoki phenomenon also causes abnormal weather patterns. An El Niño Modoki in 2004 created a hot water mass in the tropics near the international dateline. Typhoons thus formed in more eastern waters than usual; as a result, 10 typhoons made landfall in Japan that year, far higher than the average of 3 per year. 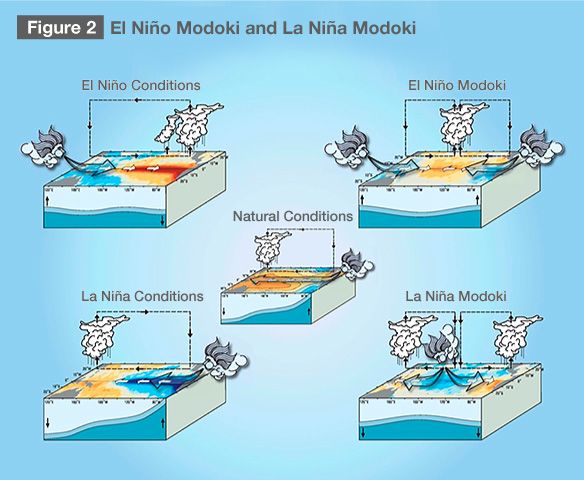 Focusing on Variability, not Change

The mechanism by which global warming results in abnormal or extreme weather phenomena can be summarized as follows: (1) global warming, leading to (2) ocean warming, producing (3) greater frequencies of irregularities in ocean currents and weather patterns, causing (4) damage from abnormal and extreme weather. Most debate today is based on a very superficial—and often inaccurate—understanding of the underlying geophysical mechanisms. One reason for this is that people are confusing “climate change,” which is about long-term trends, and “climate variability,” which describes the meteorological patterns that cause abnormal weather.

The United Nations Framework Convention on Climate Change was adopted in 1992, and Japan too became a signatory. This convention has been mistranslated—regarding which I lodged a protest at the time—and thereafter misconstrued in Japan as an agreement on climate “variability,” even though it is really about “change.”

The reason for the persistent skepticism about global warming—despite the undeniable prevalence of abnormal weather conditions—may be such confusion among many people, notably the media. Climate change occurs gradually over time, while El Niño, dipole, and other manifestations of climate variability are far more dynamic.

It is thus of great importance to have an accurate understanding of the 16-year “hiatus” in rising temperatures and to properly distinguish between change and variability. Newspaper headlines may misleadingly announce that El Niño is not evidence of climate change; this may be true in a technical sense, but almost all readers would misinterpret this as meaning that weather patterns are not changing at all. Such misunderstanding has been a major obstacle in advancing needed policy countermeasures.

End of the Moratorium

Scientific research, meanwhile, has made great strides in analyzing changing weather patterns and in developing forecasting technology. El Niño conditions in the Pacific, for instance, can be predicted with considerable accuracy up to a year in advance. While preventing human causes of global warming may be difficult, disaster management could be enhanced through improved forecasts, thereby helping prevent or alleviate damage from abnormal weather.

The 16-year hiatus is likely to end fairly soon, as the oceans become incapable of absorbing much more heat. Abnormal and extreme weather conditions will then become even more prominent. Preparing for such an eventuality is thus a task requiring utmost urgency.

(Banner photo: The oceans have thus far helped prevent a rapid warming of the globe, but as sea temperatures rise as well, the pace of climate change could accelerate.)