Politics Economy Society Jan 5, 2015
Four in five municipalities in Hokkaidō are expected to see their population decline by 30% or more over the next quarter century. How are they preparing for such potentially decimating demographic changes? A number of them have come up with unique solutions.

The Atrophying of Hokkaidō

Japan faces serious demographic challenges owing to its graying, shrinking population. The problems are perhaps most acute in Hokkaidō, Japan’s northernmost and largest prefecture. Hokkaidō accounts for over 20% of the country’s total land area but only 4% of its population, making it the least densely populated of Japan’s 47 prefectures. Its large land area, cold, snowy winters, and widely scattered communities are features that make it unique in Japan. 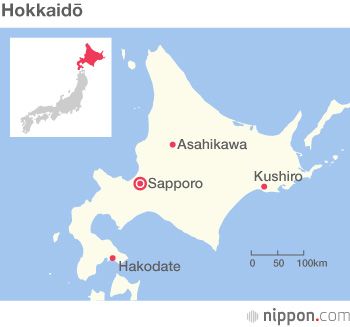 According to the latest population projections by the National Institute of Population and Social Security Research, Hokkaidō’s population is forecast to tumble from 5.5 million in 2010 to 4.2 million in 2040. Population is expected to decline in all 141 municipalities in the prefecture, with 80% of them seeing the number of residents shrink by 30% or more. Some 78% of Hokkaido’s municipalities, moreover, fall into the category of cities that could “disappear,” as defined in a policy recommendation by the Japan Policy Council: cities in which the number of women aged 20 to 39 are projected to fall by 50% by 2040. While Hokkaidō was not cited as having the highest depopulation risk, it still ranked near the top among prefectures in Japan. The trend was particularly noticeable in cities that once flourished as centers of the coal-mining and fishing industries during Hokkaidō’s development in the Meiji era (1868–1912) and thereafter.

Hokkaidō is unique for not just its geographical and demographic features but also its history. The national government’s involvement in the development of the prefecture can be traced back to the establishment of the Kaitakushi (Hokkaidō Development Commission) early in the Meiji era. Following World War II, the prefecture was built up systematically in accordance with a policy to support the revival of Japan’s economy as a whole. It also figured prominently in political and national security policy—although this was not explicitly stated—owing to Hokkaidō’s proximity to the Soviet Union, making it important during the Cold War to defend Hokkaidō as Japanese territory on which Japanese residents live.

Under this national policy, vast sums—compared to other regions—were spent on public works projects to rapidly build up infrastructure. The prefecture’s population continued to climb through the 1990s, jumping from just 60,000 at the start of the Meiji era to 5.7 million by the end of the twentieth century—in contrast to similarly remote prefectures in northern Tōhoku and southern Kyūshū. And Hokkaidō continued to supply the rest of the country with needed food and mineral resources, principally coal, thus playing a vital role in the national economy.

Yet, many of the targets outlined in the Hokkaido Comprehensive Development Plans drafted successively over the years were not fully reached, such as those for increases in population, the sophistication of the industrial structure, robust economic growth, and the attracting of new investments in plants and equipment. The expansion of development projects also had the unintended consequence of making the Hokkaidō economy overly reliant on public works. Since the 1990s, moreover, Hokkaidō’s importance in national policy has fallen dramatically with the end of the Cold War and the globalization of the Japanese economy.

Since the early days of Japan’s modernization, Hokkaidō has shouldered a significant share of Japan’s economic development burden through an informal and mutually complementary arrangement with the national government. The rest of the country gained access to Hokkaidō’s abundant resources, while the prefecture benefitted from a concentration of development projects, so there were gains on both sides. Cracks began to appear in the cooperative relationship in the late 1970s, though, as the policy priorities of the national government were increasingly at odds with the broader demands of Hokkaidō residents.

Hokkaidō governors across the political spectrum have sought over the years to advance independent policy solutions to pressing issues, as a result of which Hokkaidō has led the nation in a number of areas, such as in implementing an ordinance on environmental impact assessments, building public housing with nursing care facilities, conducting “temporal assessments,”(*1) and being named a model dōshūsei (system of regional blocks to replace Japan’s 47 prefectures) zone.(*2) In their own distinctive ways, Hokkaidō governors have addressed local issues by at times cooperating with Tokyo and, at others, resisting national demands and coming up with their own solutions.

Fewer innovative ideas have emerged from Hokkaidō in recent years, though, owing to fiscal constraints that have forced the prefectural government to slash its workforce, salaries, and new projects.

Niseko: A Wave of the Future?

Given this background, how can Hokkaidō meet the challenge of a rapidly shrinking population? The first task would be to formulate an industrial policy that draws on local strengths in a globalizing economy. Economic conditions since 2000 and the “trinity reforms” of decentralizing local finances have had a devastating effect on many Hokkaidō municipalities—including, but by no means limited to, the city of Yūbari, which declared bankruptcy in 2007.

At the same time, a number of local governments have long been pioneering innovative community-building initiatives—some that have been among the most progressive in the country. One outstanding example is the town of Niseko, which in 2001 became the first municipality in Japan to enact a basic local autonomy ordinance (officially called the Machizukuri [District Enhancement] Basic Ordinance) based on the principles of public participation and information sharing. Niseko has since emerged as one of the most international of municipalities in Hokkaidō, welcoming many tourists from Australia and other countries, with the result that more people from both Japan and abroad have been moving in to take advantage of the job opportunities there. While there exists a national tourist promotion campaign to attract foreign visitors, Niseko has been making its own efforts to actively publicize its attractiveness as a ski resort to Australian and East Asian tourists and to promote exchange between local residents and foreign visitors. As a result, it has succeeded in building a highly distinctive municipality centered on tourism, agriculture, and environmental initiatives.

The town of Shimokawa has been focusing its community-development efforts on the use of sustainable forest resources since the 1980s. In recent years, it has been utilizing wood biomass as a source of energy, making this part of a unique community-consolidation and revitalization project in the town’s Ichinohashi district, and this has attracted great interest.

For several years, the city of Kushiro has been attracting long-stay visitors over the summer months. Local residents are not particularly fond of their summers, which tend to be chilly and foggy. But for those suffering from hot, muggy weather elsewhere in the country, the cool temperatures offer a welcome relief. As Kushiro’s appeal became better known, it began hosting not only more summertime tourists but also academic conferences and sporting events, leading to such policy benefits as a boost in local economic activity, exploration of new lifestyles, and reduced electricity use.

In addition to these local initiatives, the national government is throwing its support by designating the “Hokkaido food complex” as a comprehensive special zone for international competitiveness development. The prefectural government, the Hokkaidō Economic Federation, and the cities of Sapporo, Ebetsu, Hakodate, and Obihiro are leading research efforts to boost food production and create value-added local products, as well as to raise the competitiveness of the agricultural and food-related industries.

It goes without saying that the key to countering the expected population decline is to create jobs. Doing this will require efforts by both the public and private sectors to develop and further refine Hokkaidō’s many distinctive and competitive features.

Drawing out Hokkaidō’s full potential will require the strengthening and expansion of networks both within and outside the prefecture. The big challenge will be to more fully utilize the social infrastructure that has been built up over the years; said another way, new “software” is needed to run the existing hardware in a better, more efficient way. There is great room to take fuller advantage of its location—lying at the junction between Japan’s other islands, along with the rest of East Asia, and both North America and Europe—to develop Hokkaidō as a hub for both air and sea routes in the Northern Hemisphere. This can be linked to the scheduled extension of the Shinkansen service to Hakodate in 2016 to maximize Hokkaidō’s transport potential.

Road networks must also be enhanced and linked more closely with such services as distribution, disaster prevention, and healthcare, taking into consideration that some regions will lend themselves to a consolidation and concentration of neighborhoods while others will need to remain sparsely populated for socioeconomic reasons.

Another priority will be land and environmental conservation policies that address needs that are different from other prefectures. Hokkaidō is a cold, snowy region claiming 22% of Japan’s total land area with widely dispersed communities. Providing public services is therefore bound to be more costly, even under the most efficient of arrangements. So in addition to enhancing the competitiveness of the agriculture sector, consideration should be given to introducing direct subsidies to farmers, as the European Union has done. Ensuring there are sizable, permanent settlements on islands and other remote areas near foreign borders is also becoming more important from land conservation and national security perspectives. Areas untouched by human activity are almost nonexistent, even in Hokkaidō’s World Heritage sites and national parks. The population must be maintained at a certain level to ensure that such natural environments are properly maintained and protected as national assets.

The Hokkaidō government has announced a “disaster backup center” concept—inviting the transfer of economic functions from the greater Tokyo area—in response to the heightened awareness of disaster-management needs following the March 2011 earthquake and tsunami. In one notable development, the AXA insurance group in Japan has decided to move part of its head office functions to Sapporo.

The Respective Roles of National and Local Governments

Because of Hokkaidō’s history of development under a nationally driven policy and its unique meteorological and geographical features, the negative consequences of rapid population decline have begun to appear, both at the prefectural level and in a more acute manner in a number of localities. There are, though, some promising examples of local initiatives that draw on available resources in infrastructure, the natural environment, and geography.

Hokkaidō’s municipal governments, local business leaders, and residents will be expected to proactively push forward the needed integration of soft and hard infrastructure, partnering between the private and public sectors, and development of domestic and international networks. And the job of the national government should be to promote the decentralization of political power to encourage further local innovations, recognizing that local authorities cannot simply be made to compete like private companies under market conditions.

Due consideration must also be paid to the difficulty of ensuring land and environmental conservation with a nationally uniform set of standards. It is in this light that Hokkaidō offers many valuable lessons in building a model of regional revitalization through close national-local cooperation.

(Originally written in Japanese on December 12, 2014. Banner photo: In Niseko, a popular ski resort for tourists from Australia, many of the signs are in English. Photographed February 2011. © Jiji.)

(*1) ^ A policy of reexamining public works projects that have long been suspended to determine whether or not they should be continued. Hokkaidō was the first prefecture to introduce it in 1997.

(*2) ^ Hokkaidō was designated a model dōshūsei region in 2006, and a number of national functions were transferred to the prefecture.