Manga and Anime as the Japan Brand

How Can Anime Build on its Past Success?

Culture Jan 27, 2015
“Anime” has become a common term worldwide among the younger generation raised on Japanese animation and these fans have come to expect a lot from anime produced in Japan. This article looks at the challenges ahead for the anime industry as it seeks to meet those expectations.

Since 2007, I have been engaged in cultural diplomacy to bring Japan and the world closer together through anime, manga, J-Pop, Harajuku fashion, and other realms. As of December 2014, I have visited over 130 cities in 25 countries for these activities, which have made me realize again the great influence Japanese anime has had among young people in forming their personal identities.

When I visited a school in Rome in 2007 on one of my overseas trips I asked the students whether they liked Japanese anime. And I’ll never forget the answer from one of the boys sitting in the front row, who said, “You don’t even need to ask that question. We all grew up on Japanese anime.”

He wanted me to plunge right into a substantial discussion of Japanese anime and the anime industry, without beating around the bush. And I suspect that many overseas readers of this article will share that feeling. In fact, it seems that only Japanese people are unaware of that level of interest overseas. 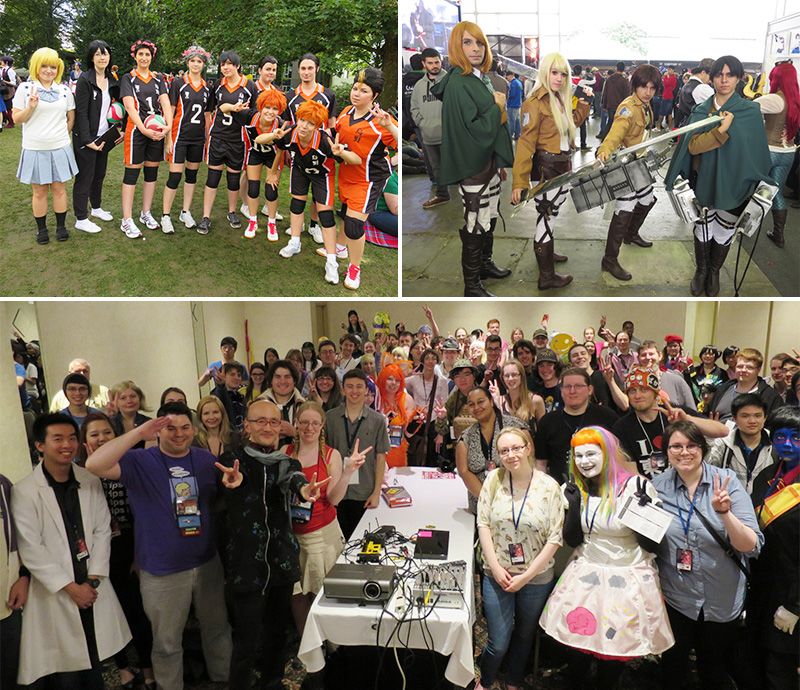 Scenes from some of the Japanese anime-related events held around the world in 2014 (clockwise from upper left): Fans enjoying cosplay (costume play) as characters from the anime Haikyū!! at the Connichi event, a manga/anime convention held in Kassel, Germany; Shingeki no kyojin (Attack on Titan) cosplayers in São Paulo, Brazil at Anime Friends, the biggest manga/anime event in South America (photograph courtesy of Sakurai Takamasa); fans at the Anime North event in Toronto, Canada, after Sakurai’s lecture.

The word “anime” has now become a common term worldwide, referring specifically to animated content produced in Japan, as distinct from the general concept of “animation.” The ability to deeply assimilate something that first arrived from overseas is not limited to the case of anime and seems to have been handed down through generations of Japanese creators, almost as if genetically inherited. Perhaps the term “craftsmanship” best describes this creative approach.

At the outset of animation in Japan, budget limitations were a major problem. One goal of animation has always been how to depict human movement as realistically as possible, but for animators in Japan, where budgets were low, a key task was how to get by with as few frames as possible. This made it necessary for them to come up with innovative creative methods to compensate for that weak point. Those efforts are what led to the emergence of anime as its own distinctive genre. On further reflection, it becomes clear that some of the qualities about anime that young people overseas love—like the unpredictability of plots and the complexity of characters and stories—developed as an extension of the effort to make up for the problem of limited budgets.

Wealth of Manga Stories to Draw From

Another thing that has set anime apart from other types of animation around the world is that the stories originate in works of manga.

Japan is the only country to have had weekly manga magazines published continuously for decades in the postwar period. This manga publishing has been big business in Japan, to the point where success or failure even has determined the financial situation of major publishing firms. And, following that capitalistic logic, a structure was formed in the manga industry to assemble a wide range of talent. The perennial issue for manga artists and their publishers has been to come up with unprecedented stories and concepts, while the business model for this industry depends on the existence of the legions of readers who are eager to read those manga works.

Just as “anime” and “animation” can be distinguished, the world has also come to see a distinction between “manga” and “comics.” And the fact that works of anime have been based on the rich creative resources of the manga world, rather than relying on original scenarios, is another thing that sets its business model apart from that of animation in other countries.

The best example of this business model today is the anime Shingeki no kyojin (Attack on Titan), which has been a hit among fans worldwide. The story features a world brought to crisis by the appearance of gigantic creatures that devour human beings. The anime combines the allure of the original story and characters of the manga with the dynamic motion that only anime can bring to depict the battles between the humans and the giant creatures. This combination has won over young fans around the globe.

Japan’s system of production for anime now faces a turning point, however. The question comes down to how to incorporate the element of computer graphics. Even though the rest of the world has switched over to CG techniques for animation production, many of Japan’s creators have stuck to the hand-drawn approach. And naturally, computers have become an indispensable tool for anime production in Japan, too, but even if CG is used for backgrounds or to depict robots or space ships, the human and animal characters have still been drawn by hand. This is a key characteristic of Japanese anime. In this sense, CG has remained in a supporting role to the hand-drawn artwork.

But more recently a new trend has been emerging within Japan’s animation industry. This is, simply put, the trend toward the use of CG technology to create images nearly on par with the quality of human animators.

Up to now anime has been hand-drawn for the simple reason that the results looked better. And the cost of CG was too expensive for the budges allotted. These are the two main reasons why use of CG did not go mainstream for anime production in Japan, but advances in CG have turned that common sense on its head, to the point where the same reasons that had backed the use of hand-drawn animation are now the basis for the need to shift to a CG approach

Most of the anime producers in Japan do not have the global marketing prowess of Disney or the financial resources that domestic giant Studio Ghibli channels to its works. The bulk of anime are produced under limited budgets for broadcasting on television. But TV viewers in Japan are quite demanding, expecting high quality for these anime. Given the budget constraints, most of the work of drawing frames and filling in colors within the production process has been outsourced to other Asian countries.

The animation industry in Japan has been facing a crisis for some time related to this hollowing out of production in Japan and the question of whether the country will be able to preserve its production technologies. One of the key tasks for Japan’s animation industry is to create hand-drawn quality using CG without going over budget. Enterprising anime directors and CG creators are wholeheartedly engaged in this task in a spirt of craftsmanship.

The Issue Is Bigger than Copyrights

Another issue facing Japan’s animation industry is the global nature of the market today. Anime can now be seen throughout the world, but often it is viewed illegally via the Internet. This phenomenon has led to major financial losses for the animation industry in Japan. Many anime fans have posted videos of their favorite works with subtitles added so other fans can hear the original voices of Japanese voice actors. From a legal standpoint this is clearly unacceptable, but the issue is a bit more complex than that.

Raising awareness about copyrights is important, of course. I’m certainly well aware of the importance of this issue and do not downplay it. I spend a great deal of my time giving lectures overseas about the anime production process, and in my talks I try to make it clear to my audiences that anime do not spring magically out of some box, but rather are the fruit of many long hours of labor performed wholeheartedly by many dedicated creators.

At the same time, however, it is pointless to become transfixed on the legal issues or such awareness-raising efforts alone. It is important to bear in mind that the fans out there who are adding subtitles are not at all motivated by financial gain, but rather by a love of the particular work and a desire for as many other people as possible to view it.

The Need for a New Business Model

If we look at the situation from a different perspective, we can see that online viewing has overturned the old framework of the twentieth century, when anime could only be viewed on television. If the animation industry itself tried to bring about the same global online viewership on its own, it would be impossible given the astronomical costs involved.

The structure for Japanese anime to generate revenue is based mainly on sales of packaged DVDs. This means that the business model itself is quite limited and one problem that is often pointed out is that the only anime that tend to get made are those that can definitely be sold in that DVD format. The great diversity of Japanese anime, which has been one of the genre’s charms, clearly seems to be threatened by that one-dimensional approach centered on DVD sales.

There is no reason to be pessimistic, however. Unlike the early days of anime, people below a certain age around the world, irrespective of country or region, have grown up watching Japanese anime. And works of Japanese anime, which overturned the old twentieth century view that animation is just for kids, are likely to continue to be loved as long as the spirit of craftsmanship lives on among the creators of these works.

The key issue is that the time has come to fundamentally rethink the model for anime, and this will not be possible unless the industry shifts to a more global approach. Granted, those that are still turning a profit today might hope to escape that transformation. But such an attitude only shows that the response to the current crisis is being put off. The question of whether the anime industry in Japan can construct a new business model on a global scale will determine whether it will be able to continue producing high-quality works or not. A lot is riding on the outcome, including the hopes and expectations of people around the world who were raised on Japanese anime.

(Originally written in Japanese and published on December 15, 2015. Banner photo: Manga and anime fans at the Connichi event held in Kassel, Germany in September 2014.)