When Will the “Postwar” End? Japanese Youth in Search of a Future

Society Feb 10, 2015
Japanese teenagers and young adults are remarkably content with their lives, in spite—or perhaps because—of the uncertain future they face. Sociologist Furuichi Noritoshi makes the case that the nation has betrayed its young people by artificially extending the “postwar” economy instead of adapting to the realities of a post-postwar world.

This year, as we know, marks the seventieth birthday of “postwar Japan.” Having written that, I am struck by the strangeness of it. After all, 70 years is a very, very long time—an entire lifetime for an individual human being. Yet seven decades after the end of World War II, the media continue to use the term “postwar” to refer to our society and economy.

Make no mistake; World War II was a huge turning point for Japan. It was the worst disaster in our history, claiming more than 3 million lives among the Japanese alone. That said, 70 years have passed, and each year there are fewer people left who remember the war and its immediate aftermath. About 80% of Japan’s 127 million people were born after the war. Everyone likes numerical milestones, so one can understand the temptation to dwell on the year 2015 as “year 70 of the postwar era.” But the fact is that 1945 is becoming ancient history.

In a public opinion survey conducted by the NHK Broadcasting Culture Research Institute in 2013, only 20% of respondents could correctly identify the date of the attack on Pearl Harbor and the beginning of the Pacific War. By age group, the portion of correct responses was 6.9% for respondents in their twenties and thirties, 16.5% for those in their forties and fifties, and 24.8% for those 60 and up. While younger respondents were the least likely to answer correctly, it is revealing that only one in four of those aged 60 or older—the generation closest to the war—knew the right answer.

In another NHK survey, this one conducted in 2010, only 27% of respondents could give the date of the atomic bombing of Hiroshima, and only 23% knew the day on which Nagasaki was bombed. In this case, 25% of those in their twenties and thirties got the answer right, as compared with just 19% of those 60 and up. (These findings provided wonderful ammunition against all those who like to grumble that the young have no knowledge of the war. It is true that young people are ignorant of the war, but as it turns out, so are the elderly.)

Images of Peace and Prosperity

As these surveys attest, time has inexorably washed away Japanese memories of World War II. Yet somehow the “postwar” designation lingers on and on. One reason for this is that Japan has been fortunate enough to escape a calamity of comparable magnitude in the past 70 years. Indeed, the closest we have come to involvement in any full-scale war since then is limited cooperation in such regional conflicts as the Gulf War and the Iraq War. Granted, we have experienced major natural disasters and some horrific acts of terrorism, but in terms of their scale and death toll, those events do not begin to compare with the Pacific War.

According to the results of the government’s Public Opinion Survey on Social Awareness, a large percentage of Japanese regard “peace” as a defining characteristic of postwar Japan. Asked to pick the words or phrases that best correspond to their own positive perceptions of Japanese society today, the largest number of respondents by far choose “peace.” Until around 1990, roughly 70% picked that response, and although the ratio has declined somewhat since then, it still surpassed 60% in 2014. 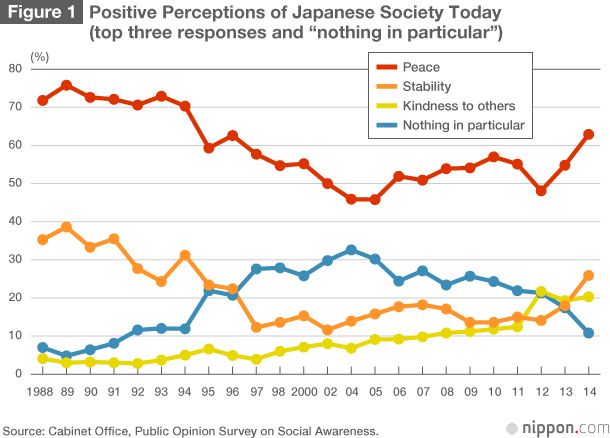 This is not solely a matter of self-image. Japan perennially ranks among the top 10 in the Global Peace Index compiled by the Institute for Economics and Peace, an international research organization based in Sydney. Although it dropped to number 8 in 2014, it was ranked third in the world in 2008.

A second defining characteristic of postwar Japan has been its great prosperity. Rising from the ashes of World War II, the postwar economy grew at an astonishing rate, aided by a number of fortuitous circumstances. And while economic growth has stagnated since the collapse of the asset bubble in 1991, our society has maintained a remarkable level of affluence notwithstanding—partly by capitalizing on the achievements of earlier generations and heedlessly borrowing against the income and assets of future ones.

An international survey conducted periodically by the US-based Pew Research Center ranks Japan very low in deprivation, as measured by the percentage of respondents indicating that they had difficulty affording basic necessities over the previous year. In 2013, only 2% of respondents in Japan had difficulty buying enough food, as compared with 15% in Britain, 24% in the United States, 26% in South Korea, and 53% in Mexico. Deprivation with regard to clothing and health care is also extremely low in Japan.

Next, let us turn to the values and lifestyles of the people born and raised in this peaceful and prosperous environment—specifically, Japan’s teenagers and young adults.

As I discuss in my book Zetsubō no kuni no kōfuku na wakamonotachi (The Happy Youth of a Desperate Country), young Japanese people today report an unprecedented level of well-being and life satisfaction. In the government’s 2014 Public Opinion Survey on the Life of the People, a full 79.1% of respondents in their 20s said they were satisfied with the lives they were currently living. This is the highest level of satisfaction for that age group since the survey began in 1967, far exceeding levels recorded in the late 1960s and early 1970s, during the era of rapid economic growth.

The tendency is even more pronounced among teenagers. In the 2012 Survey on the Way of Life and Attitudes of Junior and Senior High School Students, conducted by the NHK Broadcasting Culture Research Institute, more than 90% of respondents answered affirmatively to the question “Do you consider yourself happy at present?” Among junior high school students, a full 94% reported that they were happy, and of those, 55% claimed to be “very happy.” In fact, the fraction of secondary school students who consider themselves “very happy” has risen continuously since NHK began conducting the survey in 1982. 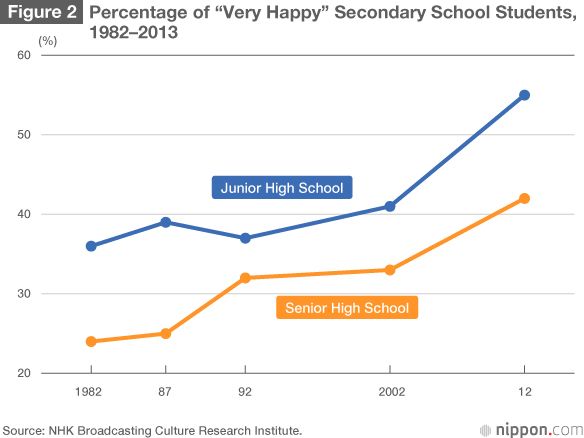 Granted, these results could be interpreted in a negative light. Are today’s young people obliged to content themselves with the status quo because they have no hope for a brighter future? There may be something to this interpretation, given that satisfaction also tends to be relatively high among the elderly, who have not much future to look forward to. Even so, such a strong sense of well-being can only be maintained amid a fairly high level of affluence.

One reason so many Japanese continue to enjoy high living standards despite the economic stagnation of the past 20-odd years is that deflation and intense market competition have made it possible to live the good life for less. Although the cost of living has risen a bit over the past year or two, it is still possible to get a good hot meal in Tokyo for a few hundred yen.

Another key to young people’s life satisfaction may be the spread of information technology. These days a smartphone and an Internet connection are practically all you need to fill whatever time you have to spare. As IT entrepreneur Kawakami Nobuo has pointed out, the Internet has created a class of himajin—folks with time on their hands—and the Internet is awash in content created by these himajin. By the same token, almost every young himajin has the option of becoming a creator of Internet content.

This situation has made it easy for young adults—even those making less than ¥1,000 an hour—to lead relatively engaged and stimulating lives. Certainly their standard of living is higher than that endured by previous generations of young people. (On the other hand, job conditions are far from ideal in most cases. Sociologist Yamada Masahiro has characterized Japan as paradise for consumers and hell for workers.)

Unfortunately, these young people may not find life quite so easy in the decades ahead. Intergenerational disparities in economic burdens and benefits are widening as a result of Japan’s top-heavy population pyramid. Meanwhile, Japan is laboring under the world’s biggest government deficit while confronting numerous fiscal challenges, including the monumental task of nuclear disposal and cleanup in the wake of the Fukushima accident. Amid these problems, the young will inevitably grow older.

Declaring an End to the “Postwar”

If we are to secure a viable future for our young people and our nation, we must once and for all close the curtain on the “postwar” era. Japan’s policies since the 1990s have had the effect of unnaturally extending the life of an era that should have already passed into history. This has given rise to strains and distortions that threaten the future of Japanese society.

From an economic standpoint at least, the so-called postwar period should have ended in the 1990s, when Japan’s brisk postwar economic expansion (peaking during the 1960s and early 1970s) finally came to a halt. Although the immediate catalyst for the economic downturn was the collapse of the 1980s asset bubble, there are structural factors underlying Japan’s slow rate of growth—particularly our rapidly aging society.

Postwar Japan owed its rapid economic growth to a plentiful supply of young workers, many of them the product of the 1947–49 baby boom. By the 1990s, however, the boomers were aging, and the population as a whole was graying, incurring ever-higher social security costs.

The 1990s marked the end of an era on the world stage as well. The Cold War system that defined the postwar era internationally ended with the collapse of the Soviet Union in 1991. It is widely acknowledged that the Cold War was in many ways conducive to the development of Japan’s postwar economy, with its emphasis on manufacturing and exports. Communist China was not yet a full-fledged participant in world markets. South Korea and noncommunist Southeast Asia, ruled by pro-American dictatorships, lacked the political stability or the educational levels to challenge Japan in its role as “factory to the world.” After the Cold War, however, Japan lost that position to China and the emerging economies of Southeast Asia. This shift heralded the end of our stable postwar industrial society and the dawn of a postindustrial service economy.

Unfortunately, Japan has been slow to adapt to the momentous changes of the 1990s. Steps to boost the fertility rate have been half-hearted. Measures to prop up the healthcare and pension systems for today’s workers have languished. Japan’s young adults may be content with their lives, but all too few feel financially secure enough to build families.

Japan’s total fertility rate has risen slightly of late, hovering around 1.4 for the past few years, but the offspring of the postwar baby boomers will soon be past child-bearing age, making a further decline in the birthrate inevitable. In the 1990s, Japan should have implemented bold policies to address the drop in fertility and ensure a soft demographic landing. There were many things it could have done to respond to changes then under way, such as building a government safety net for workers before removing the job-security guarantees traditionally provided by Japanese corporations. Instead, it spent the 1990s trying to extend the postwar model through such obsolete growth mechanisms as public-works spending.

Japanese society today is a kind of bizarre animated “postwar” cadaver kept alive through artificial means. Our leaders may tout reform, but in the end their policies merely skim the surface. Peace and affluence have given rise to inertia. Unfortunately, this peace and affluence cannot continue indefinitely.

When will Japan bring itself to declare the end of the postwar era?

(Originally written in Japanese and published on January 30, 2015. Banner photo: An event on Takeshita-dōri in Harajuku, a fashion center for Tokyo youth. ©Jiji.)