Lessons from the Japanese Miracle: Building the Foundations for a New Growth Paradigm

Politics Economy Society Feb 9, 2015
The postwar Japanese “miracle” has lost much of its luster since the 1990s, when the economy fell into a protracted post-bubble slump. Okazaki Tetsuji offers a fresh historical perspective on the structural and institutional factors that drove high-paced economic growth for close to a half-century and examines their implications for Japanese economic policy going forward.

This year people around the world will observe the seventieth anniversary of the end of World War II. While the intervening period has witnessed fierce regional conflicts aplenty (the Korean, Vietnam, and Gulf wars, among others), the nations of the world have worked hard over the past seven decades to avoid another global-scale conflagration. This is no small achievement, considering that only two decades separated the beginning of the second world war from the end of the first.

These past 70 years of peace at the global level have been a time of momentous change for Japanese society. Focusing on the economy, I would like to examine some of the underlying reasons for these changes and their implications for Japan’s economic future.

The graph below compares changes in real per capita gross domestic product in Japan, the United States, and Britain between 1870 and 2008. The values used are the natural logs of each country’s per capita GDP in 1990 US dollar purchasing-power equivalents. Japan’s per capita GDP in 1945, the year of its surrender in World War II, was $1,346 in 1990 US dollars—a mere 11% of the US figure for the same year and just 47% of the per capita income Japan itself achieved in 1940, the year before its entry into World War II. 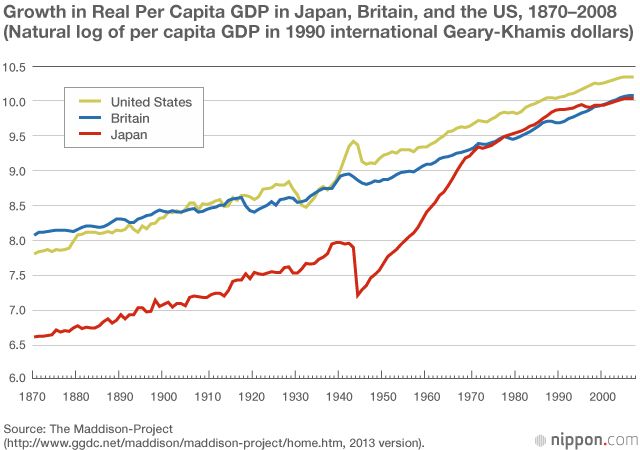 In the second half of the nineteenth century, Japan adopted a sweeping policy of modernization in pursuit of parity with the industrial West, under the slogan fukoku kyōhei: “enrich the country, strengthen the military.” Growth in Japan’s per capita GDP between 1870 and 1940 reflects the economic success of this campaign, which continued through the prewar era. As the graph indicates, Japan was steadily catching up with Britain and the United States, two of the world’s most advanced industrial economies. Japan’s per capita GDP grew from 23% of Britain’s and 30% of America’s in 1870 to 42% of Britain’s and 41% of America’s on the eve of the Pacific War.

World War II abruptly reversed this progress. Indeed, in terms of per capita GDP, the war sent the modern Japanese economy back to square one, erasing virtually all the gains it had made since the end of the nineteenth century.

The next chapter in the story is well known. The devastated Japanese economy rose quickly from the ashes of World War II. By 1956, real per capita GDP had overtaken the prewar 1940 level. During the recovery period (1945–56), per capita GDP rose at an average annual rate of 7.1%. Recovery was followed by the era of rapid growth era. As the graph reveals, Japan began closing in on the West once again, and at a speed far exceeding its prewar progress.

Viewed in this historical context, the experience of the Japanese economy in the 70 years since World War II can be seen as an extension of the national catch-up effort that began in the late nineteenth century. There are constant features underlying the economic dynamism of the prewar and postwar eras. But there are also differences.

The basic growth factor common to the prewar and postwar economies was the “backwardness” of the Japanese economy relative to the world’s advanced industrial economies. Because it was coming from behind, it was able to benefit greatly from technology imported from more advanced countries. “Technology” here includes not only technical know-how relating directly to manufacturing but also social and economic systems and institutions. Alexander Gerschenkron(*1) stressed the fundamental difference in the development process of advanced and developing economies in his classic works on “backward” economies, and his theories have since been incorporated into formal models of economic growth.(*2) The wide disparity in per capita income between Japan and the industrial West reflected a gap between the technologies supporting the Japanese economy and the world’s frontier technologies. For Japan, this signified a high potential for rapid growth through the adoption of those advanced technologies.

This analysis applies to Japan’s postwar economy, just as it does to the situation before the war. The history of the modern Japanese economy from the late nineteenth century on is awash in examples of the importation of Western technology in the broadest sense, including the adoption of Western systems and institutions.

If the knowledge and know-how gap with the West was a persistent feature of the Japanese economy before and after World War II, why did the catch-up process accelerate so dramatically in the postwar era? This is the question tackled by Fumio Hayashi and Edward Prescott in their paper “The Depressing Effect of Agricultural Institutions on the Prewar Japanese Economy.”(*3)

According to Hayashi and Prescott, the chief factor was an acceleration in the reallocation of resources, especially labor, from the relatively low-productivity agricultural sector to the non-agricultural sector, which enjoyed higher productivity and per capita income overall. The two authors posit that the main reason for this acceleration was the removal of prewar obstacles to migration resulting from postwar reforms that undermined the patriarchal system. They point out that under the prewar Civil Code, the male head of the household was empowered to keep his male heir (generally the eldest son) on the farm instead of allowing him migrating to the city. Under the postwar Civil Code and Constitution, the patriarch was stripped of such dictatorial powers, removing a major barrier to migration and the reallocation of labor.

The distribution of resources between sectors and the presence or absence of barriers to redistribution are certainly important elements in our understanding of long-term economic growth. Hayashi and Prescott have made a valuable contribution to our understanding of the Japanese postwar “miracle” by drawing a quantitative correlation between the speed of reallocation from the farm sector and the pace of economic growth in Japan. But their specific conclusions regarding the nature of the barriers to reallocation before the war are open to debate. After all, given the large income differential between the farm and non-farm sectors, patriarchs themselves would have incentives of urban migration.

I would propose an alternative explanation for the acceleration of resource reallocation and economic growth after World War II; one that focuses on institutional changes that began during the war. Japan’s wartime government instituted a wide array of reforms aimed at mobilizing resources for the war effort, as I have explained in detail elsewhere.(*4) One important focus of this mobilization effort was the reallocation of labor to the munitions industry.

Under the Labor Mobilization Plan, the government implemented policies to promote the strategic allocation of labor to the war industries. One way the government accomplished this was by nationalizing the employment agencies that had been under the control of individual municipalities and instituting a system whereby those agencies worked closely with local schools to help place graduating students—a key source of new labor—in jobs throughout the wider region.(*5) This cooperative government-supported job-matching system provided the institutional foundations for key reallocation mechanisms of the postwar labor market, particularly the market for new graduates. Prominent among these mechanisms was the shūdan shūshoku (“group employment) programs that helped young people from rural communities travel to the city en masse in search of work upon graduation from secondary school.(*6)

In my view, the biggest factor behind the accelerated labor reallocation that Hayashi and Prescott focus on in their article was the enhanced matching function of the labor market stemming from those institutional changes. Before the war, the transaction costs associated with labor-market matching constituted a major barrier to the redistribution of labor between sectors. Systemic changes instituted by the government lowered this barrier.

Much the same applies to the reallocation of capital, another basic factor of production. During the war, the government adopted policies to promote the priority allocation of funds to the war industries and government bonds. One result of this massive, nationwide fund-raising and allocation effort was the replacement of direct financing, which had supported economic development before the war, with a rapidly expanding system of indirect financing based on bank savings and postal savings. For many years after the war, this system provided the financial foundation for rapid economic growth by facilitating the absorption of savings and the efficient allocation of capital.

In Search of a New Growth Engine

As the foregoing indicates, Japan’s postwar economy had great inherent potential for growth from the outset. Its dynamic potential derived from two basic factors: (1) the gap between Japanese technology and the world’s frontier technologies and (2) a large agricultural sector with relatively low productivity. Systemic changes instituted during the war helped the economy tap into this potential, achieve the rapid growth charted in the graph, and ultimately catch up with the industrial West.

It follows, however, that Japan would find it difficult to maintain the same pattern of rapid growth once this potential was exhausted. By 1990, both sources of dynamism had dried up: The catch-up process was virtually complete, as we have seen, and the portion of the labor force employed in the agriculture sector had dropped to 6.5% from the 1955 level of 36%.

Assuming that the foregoing is a valid analysis of the rise and fall of rapid economic growth in postwar Japan, what are the implications for the nation’s economic future?

First, as many others have pointed out, if the Japanese economy already stands on the frontier of global technology, then further growth will depend on its own ability to expand those frontiers.

The 1956 White Paper on the Economy famously announced that the postwar recovery period was over. It warned that the economy had exhausted the growth potential of reconstruction and impressed on the nation the need for a new growth paradigm. “We are about to find ourselves face to face with a very different situation,” it warned. “The days of economic growth via recovery are over. Henceforth, growth will be sustained by modernization.”(*7)

More than a half century later, Japan stands at a different stage of development, yet it faces a similar challenge—that of creating a new paradigm for economic growth. This is the problem it has confronted since the 1990s, and it continues to struggle with it. I believe that to surmount this hurdle, we must develop new institutional mechanisms conducive to the massive allocation of resources for technological research and development. The essential lesson to be learned from the “Japanese miracle” is that well-designed systems and institutions have an important role to play in promoting the efficient allocation of resources and stimulating new growth.