Economy Culture Apr 9, 2015
Smash-hit titles like Puzzle and Dragons and Monster Strike have made Japan’s mobile gaming market the largest in the world. Most of the games are free, but low-priced extras in the form of in-game purchases provide hefty profits for developers.

Now Three Times the Size of the Home Games Market

Spurred by the popularity of smartphones, Japan’s mobile gaming market is increasingly making its presence felt on the world stage.

According to digital industry analytics firm App Annie, as of October 2014, Japan’s market for iPhone and Android games was the largest in the world, with a value 1.33 times the size of the US market. In addition, the combined takings of Japan’s biggest listed developers of mobile games was estimated at over ¥700 billion in 2014, more than twice the ¥300 billion brought in by the same firms in 2011.

These figures make a marked contrast with sales of home game consoles and software. Figures released by Enterbrain, publisher of the leading weekly games magazine Famitsū, valued the home-gaming software market at ¥226.4 billion in 2014, marking a fourth consecutive year of decline in sales since they peaked at ¥318.1 billion in 2010. With an estimated 28.61 million smartphone gamers in Japan, the user base has also overtaken the number of home gamers, pegged at 27.83 million. Mobile gaming has become the mainstay of Japan’s games market.

The popularity of smartphone games has been driven by a succession of huge hits. 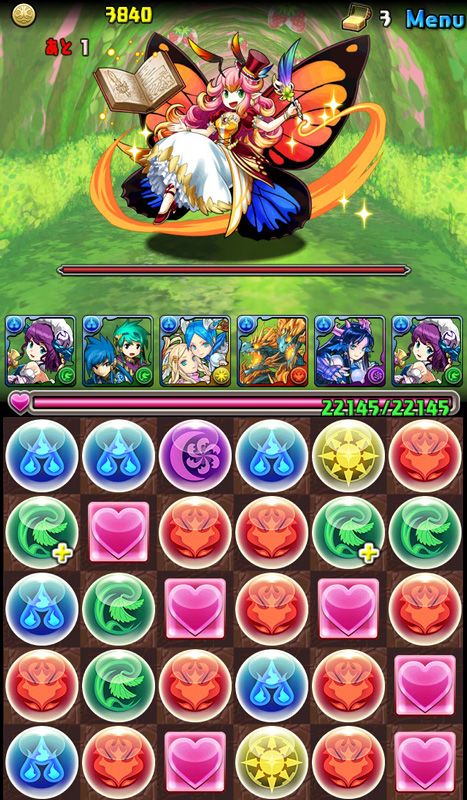 Perhaps the clearest example is Puzzle and Dragons, known affectionately to its fans as Pazudora, released by Gungho Online Entertainment in February 2012. The gameplay, combining puzzle solving with a dungeon-crawling role-playing game featuring battles with monsters, made excellent use of the touch interface of smartphones. The innovative control method made the game seem more fresh and immediate than many home titles, winning rave reviews and spawning a massive success.

In the three years since its release, the game has never strayed far from the top of the sales rankings of Apple’s App Store, with the total number of downloads topping the 34 million mark in February 2015. Gungho’s consolidated financial results for the year ending December 2014 placed the company’s overall sales at ¥173 billion and operating profit at ¥94.2 billion, marking the third successive year in which the company has surpassed its previous record takings.

There have also been cases of a single hit release completely transforming a developer’s financial fortunes. The October 2013 release of Monster Strike, a smartphone-only multiplayer combat game, by Japanese social networking site Mixi rescued the flagging company in one stroke from a critical flow of red ink. 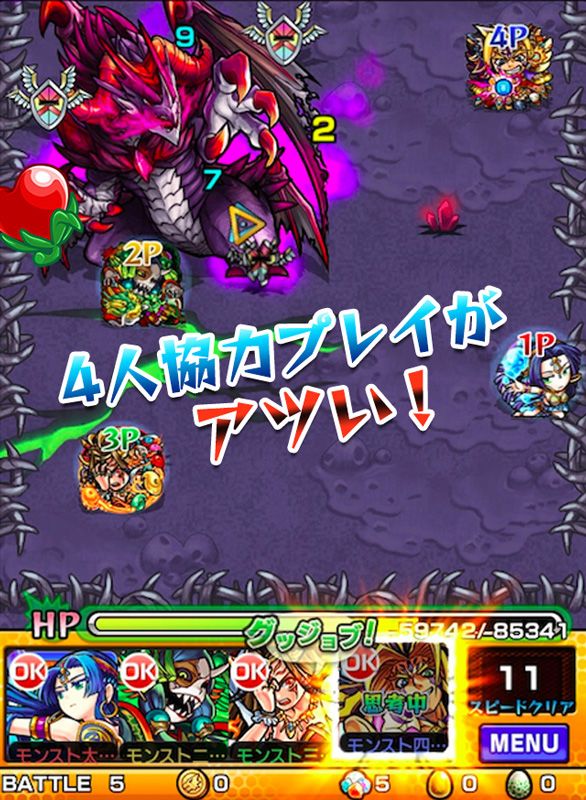 Monster Strike—popularly known as Monsuto for short—involves flicking monsters across the screen like marbles in an attempt to fell opposing creatures. This also marked a completely new control system that made the most of touch-screen technology, and the innovative use of near-field-communication technology to allow gatherings of up to four gamers to enjoy the game together brought Monsuto immense popularity, particularly among high school and college students.

Sales of the game in the quarter ending December 2014 came to over ¥30 billion, accounting for a massive 90% of Mixi’s business for that period. Monster Strike’s download figures have also been impressive, with the game on its way to 20 million users in the domestic market alone. The impact of this one smash title has seems especially dramatic when considered alongside the fact that total revenue from Mixi’s games-related activities in quarter ended December 2013 amounted to only ¥260 million. It now seems possible that Mixi’s sales figures for the quarter ending March 2015 may even top those of Gungho. 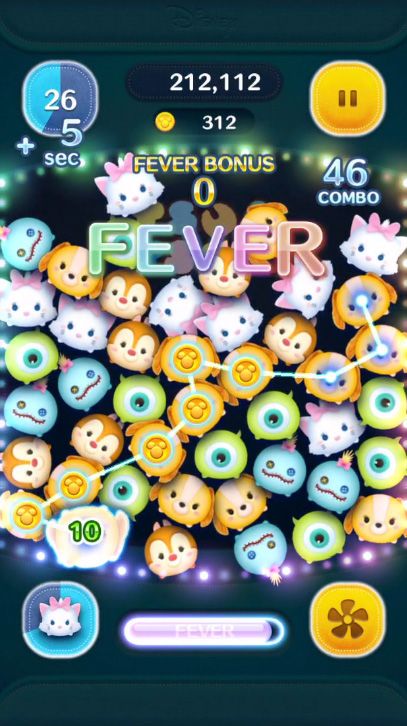 In January 2014, Line Game, the gaming arm of Line Corp. (the company behind the popular messaging app of the same name), released the puzzle game Line: Disney Tsum Tsum. As of February this year, the title had racked up 40 million downloads worldwide, achieving particular popularity with female gamers attracted by the cute gameplay, in which players attempt to erase clumps of stuffed Disney characters as they pile up on screen. Disney Tsum Tsum offers confirmation, perhaps more than any other title, that smartphone games have established a following that transcends gender.

The key to the success of smartphone games, it would seem, is their convenience. From RPGs to racing games, action games, and puzzle games, there are currently over 300,000 titles available for the iPhone alone, with new releases being added every day. The performance of the phones themselves is also constantly improving, and the iPhone 6 boasts graphics and processing power to rival Sony’s PlayStation 3.

In the case of home gaming, consumers must first head to a shop or otherwise acquire a console, generally costing tens of thousands of yen, and they have to pay a further ¥5,000 or more for each new game. Smartphone games, on the other hand can be quickly downloaded over the Internet and are ready to play almost immediately. With sessions lasting about 10 minutes, the games are designed to be played in short bursts, bringing enjoyment whenever a few spare moments can be found, such as while commuting.

The era of smartphone gaming has also seen many 30–40-something players of both genders—people who enjoyed home gaming when they were younger but drifted away from games because they could no longer find the time—return to the fold.

But perhaps the most important factor is that most of the games are easily obtainable and free to play. The programmers aim to make their money by charging players for the purchase of in-game items or characters, but the majority of gamers stick to playing without paying such additional fees. The proportion of users who make payments in the course of their gaming is ordinarily less than 5% a day.

So how do the companies make their impressive profits? The in-game items purchased by users are simply data, costing virtually nothing to produce. If a game has enough long-term users, purchases by even a small proportion of these customers are sufficient to guarantee the developer a steady source of revenue. 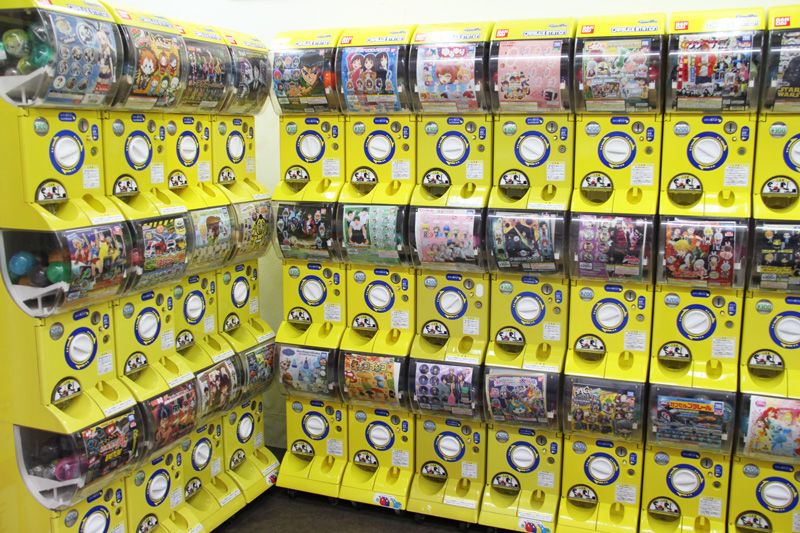 An array of gacha vending machines.

This is especially true in the Japanese market, where gamers are markedly more forthcoming with money than in many other countries. Japan’s mobile gamers are estimated to run up almost three times as much in in-game charges as their US counterparts. The roots of this inclination are thought to lie in the established Japanese practice of selling little toys or other items at random from vending machines, called gacha from the sound they make when dispensing the capsule. Smartphone games have digitized this experience, tempting users to make low-cost impulse purchases; the amounts they pay are commonly called “gacha charges.”

The charge is most commonly ¥300, and the item that the buyer gets is generally a random selection from a set of characters, monsters, weapons, and so on. The sets often include particularly sought-after items that are available for a limited period, such as two weeks, but the chances of landing the premium item are low, ordinarily just a few percent per purchase.

Japanese users are especially enthusiastic about collecting characters. There are large numbers of hard-core gamers who will spend tens of thousands of yen each month in their efforts to complete the set of rare characters, and these users are the font from which the game developers’ profits flow.

Two developments that paved the way for these lucrative gacha charges to take root in Japan were the 1999 introduction by mobile provider NTT Docomo of its i-mode mobile Internet service, which got consumers used to paying for mobile-phone content, along with the long-standing popularity of pachinko and other forms of recreation in which success or failure is determined with an element of chance. These days the demographic seen as most likely to pay in-game charges is users in their late 20s to 30s who have steady jobs providing a disposable income that they use to pursue smartphone games as a hobby.

But the practices outlined above do not enjoy the same popularity overseas as they do in Japan. Users in the West want to know clearly what they are going to get for their money and are reluctant to pay for randomly determined in-game items, no matter how great the potential rewards.

As smartphone gaming continues its rapid growth, the home-gaming industry is struggling, with the tribulations of industry titan Nintendo drawing particular attention. On January 28 the company lowered its estimate of consolidated sales for the current fiscal year (through March 2015) from ¥590 billion to ¥550 billion.

Stagnant sales in the United States and Europe are blamed for the significant dip in the performance of Nintendo’s 3DS portable game console, which sold only 7.08 million units in the three quarters ending December 2014, compared to 11.65 million for the same period the previous year. Even the huge success of programmer Level-5’s anime tie-in game Yōkai Watch, which sold 6 million copies in 2014, was not enough to halt the slide in fortunes of the 3DS, and with a majority of game producers focusing on mobile gaming, it is difficult to see where the platform’s next big hit might come from.

Nintendo’s Wii U home game console has fared even worse than the 3DS, with global sales for April–December 2014 languishing at 3.03 million units. In fact, since the console’s release in November 2012, it has sold only 9 million units in total, of which Japanese sales have constituted a mere 2 million. The Wii U faces the bleakest of situations: Not only is there a lack of new software releases, but the very hardware itself has flopped.

Despite all this, Nintendo has continued in its staunch refusal to introduce in-game charges, insisting that its system of charging just a flat fee of ¥5,000 for each piece of software means that children can use its games without the fear of running up additional costs. But as the rise of smartphone gaming gives rise to a situation in which consumers can enjoy all sorts of titles for free, the traditional pattern of buying a console and then making repeated software purchases is beginning to look more and more outdated.

On March 17, Nintendo announced a business and capital tie-up with major mobile gaming and e-commerce service operator DeNA. Plans for the partnership include the joint development of games for mobile platforms, and although Nintendo insists that it will keep up its present level of commitment to home gaming, it seems to have been forced to adjust its course.

Buoyed by the boom in demand for smartphone games, competition in this field is intensifying. Development budgets running into hundreds of millions of yen have become the norm for new titles, and games of comparable depth to the home-console classics are becoming increasingly common. Major mobile titles such as Puzzle and Dragons and Monster Strike are continuing their push into Western markets, as well as China and the rest of Asia, and the extensive know-how and experience of Japanese developers is becoming widely sought after. The new golden age of gaming heralded by the dawn of smartphones looks set to continue for some time to come.