Japan’s Welfare Policies at the Crossroads

Wrestling with Poverty and Income Inequality

Economy Society Apr 21, 2015
Japan is not the only industrialized nation that has seen an increase in income inequality in the past few decades, but it is one of the few countries where the poor are actually getting poorer. Komamura Kōhei draws on hard data to document this trend while examining its social and policy implications.

Japan’s welfare rolls have swollen dramatically in recent years. In December 2014, the number of needy persons receiving public assistance, known in Japan as livelihood protection (seikatsu hogo), topped 2.17 million, a new post–World War II high. While about 40% of the households receiving such benefits consist of elderly individuals or couples, younger recipients are also on the rise.

In short, Japan has a pressing poverty problem. Yet politicians continue to clash over the efficacy of income redistribution versus growth-oriented policies, and public opinion vacillates according to the prevailing social conditions and the tenor of media coverage.

In 2007 and 2008, the nation was shocked by reports of elderly citizens who had starved to death after their welfare benefits were cut off. During the global recession of 2008–9, media coverage called attention to burgeoning numbers of laid-off and homeless “temporary” workers, many of whom had congregated in a vast tent city in Tokyo’s Hibiya Park. Such stories fueled public concern over growing poverty and inequality, and the climate of opinion swung in favor of redistribution. More recently, as media reports have focused on the rising number of welfare recipients and cases of welfare fraud, support for redistribution policies has waned.

For much of the postwar era Japanese economic and tax policies favored a relatively equitable distribution of wealth. But in the early years of this century Prime Minister Koizumi Jun’ichirō (in office 2001–6) pushed through a series of supply-side-oriented reforms, including deregulation of the labor market. Koizumi’s successor, Abe Shinzō, upheld the trickle-down approach during his first term as prime minister (2006–7), calling for “a rising tide that lifts all boats.” Despite growing concerns over income and wealth inequality, no one has completed a rigorous study documenting the impact of those policies on Japan’s low-income households.

Meanwhile, the growth of income inequality among the world’s industrial nations has emerged as an issue of concern at the international level. In a 2011 report titled Divided We Stand: Why Inequality Keeps Rising, the Organization for Economic Cooperation and Development provides an international comparison of changes in average real income among households in the top 10% and bottom 10% between the mid-1980s and the late 2000s, correcting for differences in household composition and cost of living (figure 1). 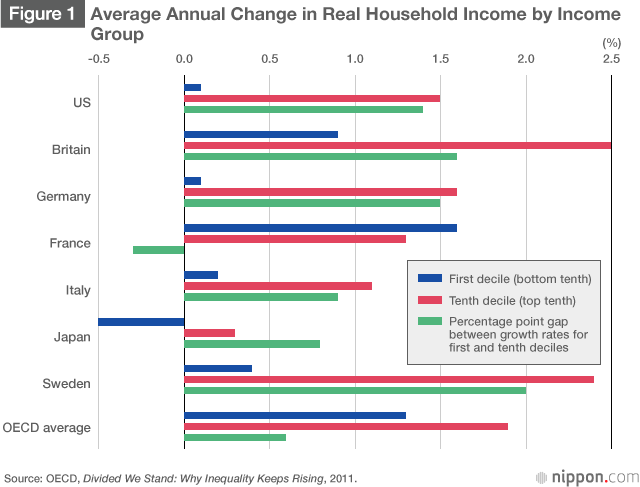 In the majority of OECD countries income has grown much faster among high-income households than low-income household, indicating that income inequality is growing. Only in a handful of countries, such as France, did income grow faster among the bottom 10% than the top 10%. Yet during this same period, while the gap between rich and poor has widened in most countries, the real income of those at the bottom has also grown, however slowly, in every OECD country except Japan. In Japan the mean real income of low-income earners has contracted at an average annual rate of 0.5%.

Let us look a bit more closely at trends in income inequality and poverty within Japan. To assess these trends accurately we need to consult and compare a number of relevant indicators.

The first two indicators are mean and median income. According to the Comprehensive Survey of Living Conditions compiled by the Ministry of Health, Labor, and Welfare, mean or average household income (total household income divided by the number of households) in Japan was ¥5.37 million in 2012. However, median household income (the income at the midpoint of the nation’s income distribution, or the amount compared with which half of all households earn more and half earn less) was only ¥4.32 million. When the mean is substantially higher than the median, it indicates that the average is being driven up by high incomes among a relatively small number of households near the top of the income ladder.

To clarify the degree to which income has become concentrated in the hands of the wealthiest we can consult the OECD database, which provides data for each country regarding the share of total gross (before tax) income earned by the top income earners. In Japan the share of income accounted for by the top 5% rose rapidly from the 1990s on and now approaches 25%. Although the concentration of income at the top is lower in Japan than in the United States (about 35%) or Britain (roughly 30%), it is substantially higher than France’s (21%) or Sweden’s (17%), for example.

A Steep Rise in Relative Poverty

Figure 2, which charts trends in Japan’s relative poverty rate between 1985 and 2009, reveals an increase overall and a particularly steep rise among younger Japanese. This undercuts the argument of those who claim that rising poverty levels in Japan are primarily an outgrowth of demographic aging and the fact that elderly persons typically have lower incomes. 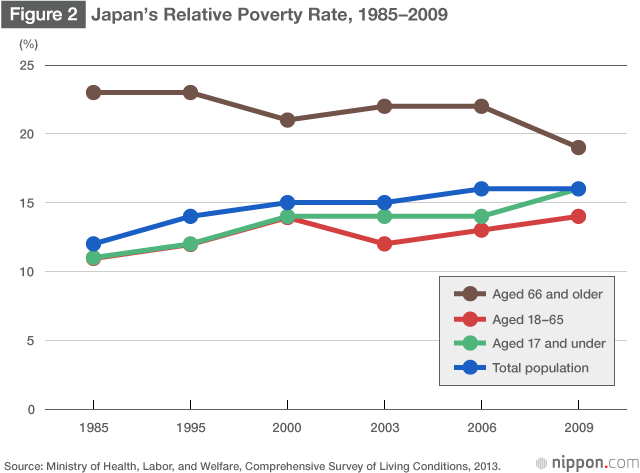 Let us now look more closely at income inequality and poverty by age group and generation, beginning with children.

Poverty has been shown to have a dramatic impact on children’s education and health.(*2) In terms of education, lower income levels correlate with lower grades and lower rates of college enrollment. This contributes to a cycle of poverty that continues from one generation to the next, as indicated by a wide range of data, including the high percentage of children from low-income families among juvenile reformatory inmates, the large number of children from welfare-supported families who go on to receive public assistance as adults, and the large proportion of orphanage-raised children who end up on welfare.

Among young and working-age adults, temporary, part-time, and short-term contract labor—known as nonregular employment—has expanded dramatically since the mid-1990s and constitutes an important factor behind the growth of poverty and income inequality. It also accounts in large measure for the increasing proportion of adults who remain unmarried. Another serious problem is the growing number of young shut-ins (hikikomori) who stay at home and remain dependent for years, unable to bounce back from setbacks at school or at work.

The major cause of income inequality and poverty among the elderly is inadequate pension benefits. Under Japan’s National Pension System, Basic Pension benefits average only ¥55,000 per month, substantially below the livelihood protection poverty line. While regular employees also enroll in the Employees’ Pension Insurance system, which provides supplemental benefits to retirees, some 8.5 million elderly people are forced to make do on Basic Pension benefits alone. Moreover, in fiscal 2015 the government will begin calculating pension payouts using a new formula that is expected to cut Basic Pensions benefits by about 30% in real terms over the next three decades.(*3) As the elderly population continues to grow, the number of impoverished seniors is threatening to explode.

Designing Policies for Each Age Group

Policies to address Japan’s poverty problem should be tailored to each age group. Where child poverty is concerned, the most pressing needs are guaranteed income and employment support measures for single mothers. The government must also do more to assist the children in low-income households with educational expenses.

For young adults and others of working age, the priority should be measures to help nonregular employees. Premiums for the public pension and health insurance schemes, on which many such workers depend, are regressive by nature, placing a disproportionately heavy burden on low-income earners. As a result, many of these employees fall into arrears on their payments. The best approach to reducing income inequality among these working-age adults would be to apply the same social insurance system to all employees while boosting housing and child allowances and offering more scholarships so that nonregular employees can start building families confident of maintaining a minimal standard of living and receiving access to healthcare.

For the elderly, we need to adopt a minimum guaranteed income to supplement  pension benefits where necessary and reduce premiums and co-insurance under the health and long-term care insurance systems.

The government also needs to provide more wide-ranging assistance for needy households across the board. More and more people are finding themselves in straitened circumstances yet ineligible for any kind of government assistance. These include shut-ins and the long-term unemployed—people who are unable to penetrate or return to the labor market after personal or professional failures—as well as households that are mired in debt. Cash benefits alone are not the answer. We must provide a variety of supports, including career training, job placement, and consumer and financial counseling. This April local governments began administering a brand new system of public assistance designed to provide comprehensive support to a wide range of needy families and individuals. How well this system succeeds could have major implications for Japanese society in the years ahead.