Japan’s Welfare Policies at the Crossroads

Economy Society Lifestyle Apr 22, 2015
As Japan’s population shrinks, the country needs to make maximum use of its potential labor force, including those aged 60 and over. But the present system of rehiring older employees on short-term fixed contracts brings with it numerous problems.

In a country where it was once standard practice for company employees to retire at the age of 60 and start living off their pensions, it has become increasingly common to keep working well into one's sixties.

One reason is that the government has been incrementally raising the minimum age for receiving public pension payments from 60 to 65. An additional factor, however, is that Japan’s working population is getting smaller as the birthrate drops and the average age of the overall population rises. As of 2014, the labor force had fallen to 65.9 million according to government statistics—a 2 million drop from the 1998 peak of 67.9 million—and this downward trend is set to continue. Boosting the number of available workers is a major challenge facing the nation, and one answer is to tap underutilized labor resources. This includes not only women and but also senior citizens, who constitute a rapidly growing sector of the population. To achieve this, Japanese business needs to increase the number of jobs for seniors and develop the kind of corporate human-resource management that makes effective use of these employees and lets them apply their abilities to the full.

Rehiring as the New Normal 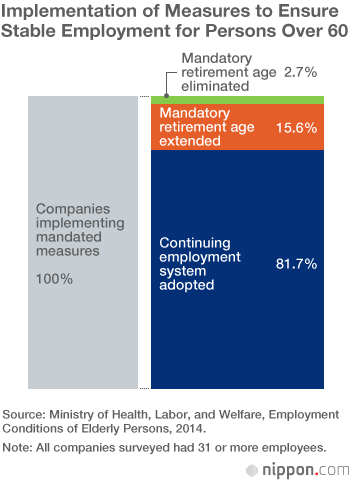 The most significant step the government has taken in this direction in recent years is the 2013 amendment of the Act on Stabilization of Employment of Elderly Persons. Although the amended law includes some transitional measures allowing employers to set the criteria for retention of employees over 60, it will ultimately make it obligatory for them to ensure that there are jobs for all employees who wish to continue working until the age of 65.

At present, however, many companies essentially maintain their old policy of mandatory retirement at 60 but offer ongoing employment until 65 by rehiring older workers in new positions, typically under short-term contracts. As the chart below indicates, just 18% of employers have responded to the change in the law by extending or abolishing the mandatory retirement age. More than 80% have implemented a “continuing employment system” under which, in most cases, employees over 60 are reemployed on fixed-term contracts.

The table below indicates the percentage of employers that modify job duties and terms of employment for workers once they reach age 60. “Work freedom” refers to such conditions as working hours, “expected role” to job duties, and “expected results” to the level of responsibility for performance.

Working Conditions for Employees Over 60

Source: Japan Organization for Employment of the Elderly, Persons with Disabilities, and Job Seekers, Current and Future Wage Trends for Elderly Workers, 2012.

Only 8.9% of companies surveyed maintain the same job conditions with respect to work freedom, expected duties, and expected results for employees who have passed the mandatory retirement age of 60. A full 42.9% modify conditions in all three areas, typically through shorter hours, reduced duties, and lowered expectations. Large corporations in particular tend to fall into this group.

Other conditions of employment, such as evaluations and wages, may also change for employees who are over 60. For example, it is common to cut wages by a set amount depending on the employee's responsibilities, skills, wages, and position as of mandatory retirement age. At many companies, employee evaluations are simplified or done away with altogether, reflecting lowered expectations.

If employees were forced to leave their companies at age 60, they would be hard pressed to find work that made full use of their experience and abilities, and they would also face the possibility of unemployment. For this reason, most would prefer to remain at the same company.

But keeping employees in the same jobs with the same conditions even after 60 could cause a number of problems for employers. It could increase labor costs and limit the hiring of new recruits. If the next generation of employees had fewer opportunities to build up experience in higher positions and improve their skills, their motivation could decline, making it tougher to maintain and improve the workforce over the long term. Doubtless most companies would prefer to offer continuing employment only to select workers, rather than as an across-the-board requirement.

The flexible continuing-employment approach attempts to reconcile the conflicting needs of employers and older employees. Under this system, Japan has achieved some success in tackling the major policy challenge of boosting the ranks of the over-60s in the workforce.

But the system also raises serious problems from the standpoint of making optimum use of older employees and giving those employees the opportunity to apply their abilities to the full. There are numerous questions regarding the arbitrary nature of the changes in job duties and the fairness of the adjustments in pay and other terms of employment.

Transitioning in a Two-Tiered System

The problems with the current approach are in essence transition issues that arise when a worker's status shifts from the category of long-term regular employee to that short-term contract employee. The transition is a difficult one owing in large part to the great discrepancy in the treatment of regular and short-term employees in Japanese companies. The issues surrounding changes in job duties and employment conditions emerge from employers' efforts to effect this transition.

Needless to say, the transition is a challenge for the employees as well. As employer expectations and job conditions change, older employees must adjust their work attitudes, expectations, and behavior accordingly.

To put it simply, while the flexible continuing-employment system has been successful in providing positions for workers over 60, companies and workers have both struggled to cope with these transition issues. Resolving them, however, will require fundamental reform of the corporate human-resource management system as a whole, not merely the management of older employees. This is a major challenge Japan must tackle to improve employment for older workers from a qualitative as well as a quantitative perspective.

(Originally written in Japanese and published on April 1, 2015. Banner photo: Worker aged over 60 at a Tokyo office. © Jiji Photo.)