Economy Society Jun 3, 2015
People are all too prone to attribute Fukushima Prefecture’s post-3/11 problems to a uniquely “Fukushima” set of circumstances. But on closer observation we find that some of Fukushima’s most serious problems stem from issues that are nationwide in scope. Addressing these problems effectively will hinge on approaching them from a national perspective.

Profound misunderstanding of the circumstances in Fukushima continues to impede efforts to restore life in the prefecture to normal. More than four years after the Great East Japan Earthquake and the accompanying nuclear power plant disaster, this misunderstanding is among the prefecture’s most pressing unresolved issues.

Typical of the misconceptions about Fukushima is the mistaken notion that some sort of massive population exodus has occurred there. I have given some 200 talks over the past four years, and I almost always open with the question “What percentage of the people who were living in Fukushima before the disaster are now residing outside the prefecture?” The answers are invariably in double digits: “Ten percent.” “No, surely more like 60 percent.” “I’d say around 40 percent.”

The true figure is around 2.5%. Fukushima’s pre-quake population was a little more than 1.9 million, and the number of pre-quake residents remaining outside the prefecture has hovered around 40,000 or so for the past year. The exaggerated notions evident in the foregoing responses, however, reflect broadly held misperceptions. Witness the findings of a March 2014 survey by Sekiya Naoya, a project associate professor at the University of Tokyo.

So three-fourths of the respondents in Sekiya’s survey believed that population had drained out of Fukushima and that the outflow was ongoing. And their notion of the magnitude of Fukushima’s population shrinkage was, on average, about one-fourth---10 times the actual figure.

A Curious Vulnerability to Misunderstanding

I wrote the book Hajimete no Fukushimagaku (A Fukushima Studies Primer [Tokyo: Eastpress, 2015]) to help narrow the gulf between perceptions of Fukushima and the prefecture’s reality. This book, published on the fourth anniversary of the Great East Japan Earthquake, presents broad-ranging statistical data, material drawn from authoritative sources, and interviews with Fukushima residents.

A central emphasis in Hajimete no Fukushimagaku is the importance of distinguishing between issues unique to Fukushima and those common to all or most Japanese prefectures. To be sure, Fukushima has more than its share of serious issues unique to the prefecture, largely due to the nuclear power plant disaster and lingering radiation---displaced persons, soil contamination, and legal claims against the plant operator and the government. But the prefecture also contends with daunting challenges in the realms of demographics, employment, education, and healthcare that are issues throughout Japan.

The prevalent stereotype of Fukushima centers on issues unique to the prefecture. Fukushima emerged from the disasters of March 2011 as a poster child for mass victimization. Its tragedy captured the attention of people worldwide who had formerly never heard of the prefecture, and that attention focused narrowly on the fallout—including its literal incarnation—from the disasters.

Fukushima’s sensational issues dominated perceptions of the prefecture to the exclusion of mundane but equally or even more significant developments. In this scheme of consciousness, precedence went to . . .

Focusing on the sensational is a natural human response, and it can be instrumental in alleviating distress. Alertness to people in need can elicit helping hands. But the last thing that anyone who has suffered calamity or deprivation needs or wants is to be viewed persistently as a tragic “other.” I have noted how even Japanese have a tenfold misperception of the population decline in Fukushima; perceptions overseas are surely even more skewed. If we wish to understand what is happening in Fukushima, we need to reappraise the issues in the light of objective data.

Population Decline as a Reflection of Japanese Demographics

Three facets of the misperceptions of Fukushima’s population decline in the wake of the nuclear power plant disaster warrant special consideration. The first pertains to the evacuees forced by circumstances to remain outside the prefecture. A lot of the evacuees outside Fukushima have been unable to secure steady employment or permanent housing. The diaspora has thus engendered a sense of helpless isolation for some. Government support has been inadequate, partly because the relatively few evacuees outside the prefecture have commanded low priority. And assistance from nonprofit organizations is dwindling by the day.

The second pertains to the continuing residents. Let us recall that more than 97% of the prefecture’s residents at the time of the Great East Japan Earthquake are there today. The subject of evacuation has received disproportionate emphasis in discussion of post-quake Fukushima. Numerous evacuees continue to reside at sites in the prefecture, of course, just as some remain at sites elsewhere in Japan. But the main story of Fukushima is one of people maintaining or rebuilding their lives in their original homes and neighborhoods there. Their bread-and-butter concerns ought to be front and center in our perception of issues for the prefecture.

The third is demographic. Japan’s total population has long been aging rapidly and has recently begun shrinking annually. Fukushima is part of this overall trend. The population outflow associated with the events of March 2011 is but a blip in the long-term downward trend. This is glaringly apparent in the graph below. 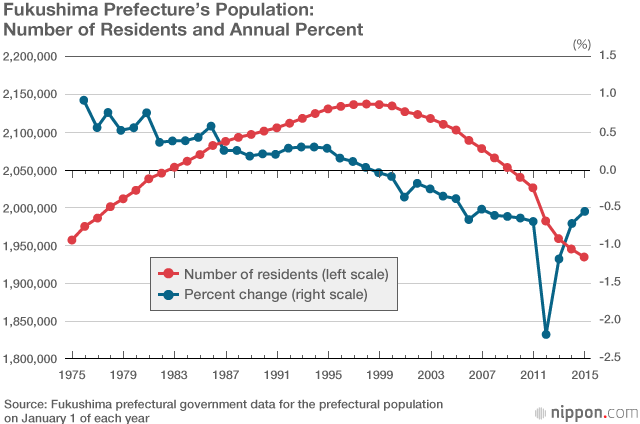 The shrinking and graying of Japan’s population are, of course, an issue of transcendent concern for the nation. Tokyo and Japan’s other large metropolises have traditionally drawn young people from the nation’s nonurban prefectures, which has aggravated the problem of population shrinkage and aging in those prefectures. The book Chihō shōmetsu—Tokyo ikkyokushūchū ga maneku jinkō kyūgen (The Demise of Japan’s Regions—Population Collapse Caused by Overconcentration in Tokyo [Tokyo: Chuokoronshinsha, 2014]) articulates the mounting sense of demographic crisis throughout nonurban Japan.

Fukushima’s population decline is thus part of Japan’s overall demographic fate. The same problems of population shrinkage and aging that are occurring in Fukushima also bedevil the nation’s other nonurban regions. So Japanese everywhere should regard Fukushima as demographic kin and not as a demographic anomaly.

Misperceptions of Fukushima’s reality have been especially vexatious in regard to the prefecture’s agricultural industry. Unfounded concerns persist about the safety of Fukushima produce since the nuclear power plant disaster of 2011.

Rice is Fukushima’s signature crop, so figures for rice production are a good indicator of the prefecture’s agricultural output. Fukushima’s farmers produced 445,700 tons of rice in 2010, the last full year before the Great East Japan Earthquake and tsunami and the ensuing nuclear power plant disaster. Their rice production declined to 353,600 tons in 2011 and had recovered only to 382,600 tons in 2013.

Fukushima’s rice production in 2013 was thus 14.2% less than in the year before the temblor. A sustained reduction in output on that order would come as a body blow to any industry in any sector. Sadly, Fukushima agriculture has suffered as much from misperceptions as from the actual aftereffects of the March 2011 disasters.

Every single bag of Fukushima rice undergoes testing for radioactivity before it goes on the market. Inspectors detected radioactivity in excess of the legal limit of 100 becquerels per kilogram in just 71 30-kilogram bags in 2012, in only 28 in 2013, and in absolutely none—zero—in 2014. Continuing rigorous testing by agricultural inspectors has also verified the absence of significant radiation in Fukushima-grown fruit and vegetables.

Farms remain idle in districts where radioactive contamination from the nuclear disaster was most severe, especially Futaba and Sōma. But researchers are developing cultivation methods and other techniques for keeping the levels of cesium in produce below the legal limits, and gradual progress toward resuming agricultural production is underway. Trial cultivation is taking place even in the town of Ōkuma, the unfortunate home of the Fukushima Daiichi Nuclear Power Plant.

The Pricing Handicap of “Grown in Fukushima” Labeling

Even as concern about radioactive contamination subsides and Fukushima’s agricultural output recovers, the prefecture’s rice and other agricultural produce suffer a pricing handicap in the marketplace. The market exacted a pricing penalty of Fukushima produce in the aftermath of the nuclear power plant disaster, and prices declined precipitously in 2014.

Several factors combined to depress rice prices for producers throughout Japan in 2014; for example, declining demand associated with changes in the Japanese diet, excess inventories, and expectations of bumper harvests in eastern Japan. But the price declines for Fukushima-grown rice were especially sharp.

The penalty exacted of Fukushima rice varies by variety, by production district, and by distribution channel. Representative examples are the prices paid to Fukushima producers by Zen-Noh (National Federation of Agricultural Cooperative Associations) for Koshihikari, a premium-grade variety of rice. Zen-Noh buys rice from producers and supplies it to the market through nationwide distribution channels. The prices it paid for 2014-grown rice were down 37.8% from the previous year for Koshihikari from Fukushima’s Hamadōri district and down 35.1% for Koshihikari from the prefecture’s Nakadōri district.

Fukushima’s rice producers are at the mercy of market forces outside their prefecture. Wholesalers in other prefectures purchase about 53% of their output. Fukushima remains a leading supplier of rice to the Kantō region centered on Tokyo, which consumes about 46% of its rice production. But the labeling on rice sold through retail outlets includes prefecture-of-origin indications, and numerous consumers in Tokyo and elsewhere continue to eschew Fukushima-grown rice. That has relegated an increasing portion of Fukushima’s output to the restaurant and prepared-food sectors, where prices are lower.

Restoring prices to their former higher levels after a fundamental shift in brand perceptions is extremely difficult. Some producers and vendors of Fukushima rice have responded by detouring around the traditional market channels. They have achieved some success by reaching out directly to consumers with a message of safety and flavor. But that is essentially a niche marketing strategy, and it is unlikely to transform the market structurally.

The Enervating Effect of Consumer Ignorance and Apathy

Although it was the events of March 2011 that triggered the crisis that continues to bedevil Fukushima agriculture, Japanese consumers have worsened the crisis, albeit unconsciously, through the market mechanism. We have swallowed, unthinkingly, blithe verdicts about the alleged unviability of Japanese agriculture, dismissing our farmers as quaint anachronisms. We have been passive bystanders as the Trans-Pacific Partnership agreement and “agricultural reform” have attained an air of inevitability. In so doing, we have propagated a self-fulfilling prophecy, the death knell for sound, homegrown produce.

If we seek quality produce—safe and delicious—at reasonable prices, we need to take responsibility for understanding the rudiments of production and distribution. To fail to fulfill that basic responsibility is to invite an inundation of questionable foodstuffs.

Those of us professing to pray for the recovery of Fukushima need to undertake a frank rethinking of our own prejudices and misperceptions. Most of the problems that our compatriots face there are issues for all of us everywhere in Japan. Let us confront those issues forthrightly in the spirit of “I am Fukushima.”

(Originally published in Japanese on May 7, 2015. Banner photo: Rice cultivation is resuming gradually in former no-entry zones in Fukushima, even as soil-decontamination work continues elsewhere in the prefecture. @ Jiji.)