The Value of a Vote and the Bicameral System

The Rightful Role of the House of Councillors

Politics Jun 30, 2015
The House of Councillors, Japan’s parliamentary upper house, was once seen as a mere rubber-stamping body. But since 1989 it has been a stronghold for whatever parties are out of power, and as such has managed to stifle ruling-party legislation. Is there a way for Japan to overcome this dysfunctional situation?

Until around a quarter century years ago, the House of Councillors only rarely voted against the decisions reached by the House of Representatives. For this reason, this upper house of the National Diet was disparagingly referred to as a “carbon copy” of the more powerful lower house. But since 1989, the reverse—more often than not—has been true, as the upper house has increasingly rejected measures passed by the lower house, inviting the opposite criticism that it has become too powerful and is impeding the policymaking process.

Under a bicameral parliamentary system, the two legislative houses may reach conflicting conclusions when they are controlled by different parties—that is, when the second (upper) chamber is in the hands of opposition forces that wish to block the policy decisions of the government formed by the party or parties with a majority in the primary (lower) house. The role of the second house changes, therefore, depending on the configuration of power in the two chambers and on the political strategies of the respective parties or the level of unity within a party. Moreover, the role of Japan’s House of Councillors has been evolving since 1989 in response to changes in the political situation.

The Liberal Democratic Party held a majority in both houses of the Diet, for the most part, from its founding in 1955 through to 1989. The fact that a single party controls both houses of parliament does not mean, however, that its members always concur. Indeed, there have been many cases in other countries of mediation required to resolve disagreements. But such situations were rare in Japan during the years of the LDP’s predominance. This was not necessarily due to upper-house LDP members being afraid to oppose government policy, but rather because differences were cleared up and adjustments made before any bills were submitted to the Diet, during a process called “preliminary review.” Consequently, differences were seldom aired during Diet deliberations, and the upper house appeared, at least on the surface, to be a mere rubber-stamping body for the decisions reached by the lower house.

The August 1989 House of Councillors election put an end to such “carbon copy” days. In that election, the Japan Socialist Party (now the Social Democratic Party of Japan) and other opposition parties, ousted the LDP as the upper house majority, which resulted in a “twisted Diet”. Since then, no ruling party has held a majority of seats in the House of Councillors, even during the period from 2009–12 when the Democratic Party of Japan was in power.

During the early days of the divided Diet, from 1989 to 1993, the policymaking process did not grind to a halt, however. In fact, the enactment rate of bills submitted by the cabinet actually improved during this period.

Once the ruling party loses a majority in the upper house, it has no choice but to seek compromise through consultations with the opposition if it hopes to get legislation enacted. The cabinet at the time was flexible toward the demands of the opposition, and the opposition, for its part, was willing to talk. This may have been the case because the top opposition party, the JSP, by then was no longer realistically capable of taking over the helms of government; rather than appeal to voters with a confrontational stance, it gave priority to having the views of its members reflected in new legislation. The share of bills that cleared the Diet actually increased during that period compared to the days when the LDP held a majority in both houses.

Administrations in Japan since 1989

Boldface indicates years when House of Councillors elections were held.

By the late 1990s, opposition parties began pooling their resources in a serious attempt to take over the helms of power, encouraged by the introduction of single-seat constituencies (combined with proportional representation) for the House of Representatives in 1994. With the launch of the present-day Democratic Party of Japan in April 1998, the opposition scrapped its former strategy of seeking concessions from the ruling coalition and instead adopted an openly confrontational stance with a view to displacing the LDP as the government party.

The highly acrimonious 143rd session of the Diet saw the LDP essentially cave in to opposition demands. The LDP was forced to discard its own bills on financial reconstruction and to nearly fully embrace the proposals drafted by the DPJ and other opposition parties in order to get them passed. And immediately following enactment, a censure motion was passed in the upper house against a cabinet minister, forcing him to resign the following month.

Unable to negotiate with a belligerent upper house, the LDP elected to partner with smaller groups in an attempt to secure a majority in both houses. Since then, the ruling party—even when holding a majority in the lower house—has continued to seek out coalition partners to prevent upper-house deliberations from breaking down.

Even this strategy met a setback, though, when the LDP and its partner Kōmeitō lost seats in the August 2007 House of Councilors election, sealing a political deadlock between the upper and lower houses.

The DPJ won 106 of 242 seats in the election, becoming the top party in the upper chamber. The strategy it adopted was not one of flatly rejecting or modifying the measures submitted by the cabinet and then seeking concessions through the joint committee of the two houses but one of tenacious stonewalling. The ruling coalition held a two-thirds majority in the House of Representatives and could enact legislation via a lower-house re-vote, in accordance with Article 59 of the Constitution.

But the lower house cannot vote on a bill for 60 days after sending it to the House of Councillors if upper-house deliberations drag on without a ballot, so the DPJ’s delaying tactics were a blow to the cabinet’s credibility. The lower house cannot take a re-vote, moreover, on measures other than legislation, so political appointments requiring Diet approval—such as for the governor of the Bank of Japan—were rejected outright.

The landslide victory by the DPJ in the August 2009 general election resulted in a change of government and also eliminated the twisted Diet. Just 11 months later, however, it suffered a humiliating setback in the July 2010 upper house election. Now the tables were turned, and the LDP did everything it could to trip up the administration by leveraging its strength in the upper chamber. Politics in Japan continued on its aimless, disoriented course.

Since the LDP returned to power in December 2012, the ruling coalition has benefited from a majority in both houses, and policymaking has, at long last, begun making headway. Important bills are now being enacted, one after another, without much debate, causing some to worry that the process is moving along perhaps too quickly.

The LDP still does not have a simple majority in the upper house, although it claims over 60% of lower house seats. This is the biggest reason that it continues to maintain its partnership with Kōmeitō. 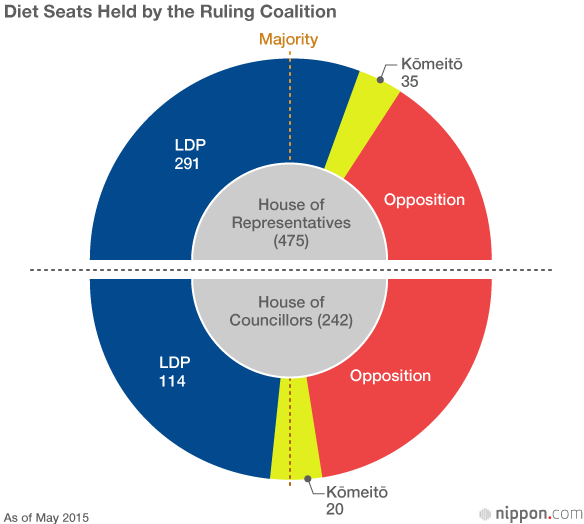 Reforms since the 1990s to the electoral system and the flow of political funds, as well as the reorganization of the national bureaucracy, have given the prime minister—who is also the head of the largest ruling party—much greater power. This has heightened party unity, greatly helping Prime Minister Abe run his administration and enabling him to enact important policy changes.

Previous PMs have not taken the initiative, though, to implement reforms on how the Diet deliberates legislation and coordinates differences between the two houses. So the House of Councillors remains a potential source of political havoc.

As opinion polls show, party loyalty among Japanese voters is not as strong as it once was. The prime minister does not have the power to dissolve the House of Councillors when public opinion is favorable, so, like the mid-term elections in the United States, protest votes tend to flow to the opposition in upper-house contests. Should the ruling party stumble in the next upper house election, the result may once again be political paralysis.

Over the years, the House of Councillors at times has been a “carbon copy” of the lower house, while at other times a recalcitrant naysayer. Neither role, however, is ideal. Instead, it should serve to consider lower-house decisions from different angles so that legislation can be revised and improved.

How can the body be made to play its rightful role? How can the Diet coordinate the opinions of the ruling and opposition parties to produce constructive agreements? In light of how debilitating a divided Diet can be, there is an urgent need to implement the institutional reforms necessary to prevent a recurrence of the political nightmare that Japan has experienced.

(Originally written in Japanese and published on June 4, 2015. Banner photo: The electronic bulletin board (upper left) shows the results of an upper house vote rejecting the nomination of Japan Bank for International Cooperation President Tanami Kōji as governor of the Bank of Japan. Photograph taken on March 19, 2008. @ Jiji.)