Politics Economy Society Aug 20, 2015
Despite much-trumpeted policies aiming to encourage female participation in the workforce, Japanese women must contend with both an economic gender gap and the gap between their aspirations and the reality for careers and marriage. Gender studies specialist Kawaguchi Akira assembles a range of data to analyze the situation for women in Japan today.

In the Global Gender Gap Report 2014, published by the World Economic Forum, Japan ranked 102nd out of 142 countries for economic participation and opportunity (104th overall). Japan scored at a consistently low level for a major developed nation, with a female-to-male ratio of 0.12 for legislators, senior officials, and managers (112th); 0.75 for labor force participation (83rd); 0.87 for professional and technical workers (78th); 0.60 for estimated earned income (74th); and 0.68 for wage equality for similar work (53rd). Since the first report was published in 2006, it has made no tangible improvement.

The Equal Employment Opportunity Act was passed 30 years ago. While it cannot be denied that there has been some progress in raising the economic status of Japanese women in that time, other developed countries have achieved a faster reduction in the gender gap.

There are two main reasons for the size of Japan’s economic gender gap. First, the traditional roles of the husband as breadwinner and the wife as homemaker retain a strong influence. The employment rate for women with children less than three years old is only 30%, which is extremely low compared with the 52% average for members of the Organization for Economic Cooperation and Development.(*1) As women are expected to take on the bulk of responsibility for housework and raising children, it is difficult for them to establish a career path.

The second reason is corporate discrimination against women. Most Japanese companies have internal training systems that are based on lifelong employment. Under these systems, companies hire new graduates and spend time training them, transferring them regularly every few years. For companies with nationwide operations, it is common for each transfer to require relocation. The systems are unfavorable to women, many of whom are unable to leave their families and transfer to other locations and end up quitting their jobs instead. For these reasons, women are discriminated against in the recruitment process, and even if they are hired, they are not given the same opportunities as male employees in terms of position, training, and promotion.

A typical form of discrimination can be seen in the personnel management systems adopted by around half of major corporations, which divide employees into different career tracks. New staff members are recruited into either the sōgōshoku (managerial) or ippanshoku (general clerical) track. The former usually involves transfers between different offices and leads to management positions, while the latter has no transfers, but no possibility of promotion to management level.

In 2012, 72% of corporations hiring personnel for a sōgōshoku track requiring transfer between locations stated that more than 80% of their hires in that category were male. In the same survey, 52% of corporations with an ippanshoku track stated that more than 80% of employees hired for this track were female.(*2) In other words, the two-track system is effectively used to divide employees by gender. Japan is the only developed country where this kind of loophole is openly in use.

The employment rate for women is rising, albeit slowly. In 1990, shortly before the bursting of the bubble economy, 56% of women aged 15–65 were in employment. By 2014  this figure had risen to 64%. Meanwhile, the male employment rate remained around the same during this period.

The higher female employment rate does not necessarily mean, however, that women are winning more opportunities to apply their abilities. In fact, in roughly the same period, from 1990 to 2015, the number of women in regular employment fell by 3.3% from 10.50 million to 10.15 million. By contrast, the number of women in nonregular positions more than doubled from 6.46 million to 13.43 million.(*3) The increase in female employment can be wholly attributed to women in nonregular positions, and this rise is the single greatest factor in perpetuating wage differences between men and women.

Lower wages for men have helped to push up the female employment rate. Salaries for men in regular positions have remained stagnant since the collapse of the bubble economy in the early 1990s, and the number of male nonregular positions has soared. There were 2.35 million more men in temporary or fixed-term contract jobs in 2014 than there were in 1990, representing an increase of 171%. The decreased income for male employees has caused increased female employment in the following two ways.

One is that more men are unable to marry due to their low income, meaning that both men and women marry later or not at all. As a result, there are unmarried women who remain in employment. Another is that married couples cannot maintain the kind of lifestyle that was once possible on the husband’s salary alone, so it is more common for both partners to work. Many women who continue to work after marriage quit their jobs to have children and then return to employment in part-time positions when their children are older, increasing the number of nonregular employees.

The Gap Between Ideals and Reality

Do Japanese women actually want to work? A 2010 survey of single men and women conducted by the National Institute of Population and Social Security Research found that the most popular imagined future life course among single women was to leave work after getting married or to have children and then to return to work after a period of child raising, with 35% choosing this “return-to-work” option. The next most popular was to go on working as well as getting married and having children; 31% of single women hoped they could balance career and family in this way. In third place, 20% wished to become full-time homemakers after marriage or childbirth. Only 5% wanted to remain single and continue working, and just 3% hoped to get married but have no children (dual income, no kids).(*4) 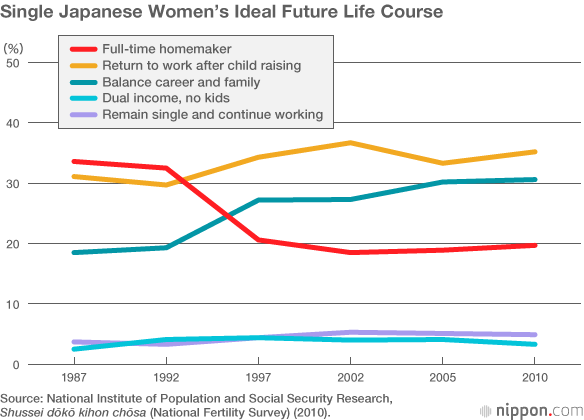 As well as asking about single women’s ideals for their future, the same survey asked about their expected life course. There is a striking gap between ideals and expectations in some of these areas. While 20% of single women hoped to become full-time homemakers, only 9% believed this would actually happen. Similarly, although 31% wished to balance career and family, just 25% expected their lives to turn out in this way.

On the other hand, many single women believed that remaining unmarried was more likely than they hoped, with 5% seeing this as an ideal but 18% imagining it as the most likely outcome. In other words, many women believed they would be unable to get married even though they wanted to do so.

When it comes to changing attitudes to marriage and work, the clearest transformation from the 1987 to the 2010 survey can be seen in the attitudes of men rather than women. In 1987, 38% of single men wished their future wives to be full-time homemakers, but that ratio had dropped to 11% by 2010. Over the same period, the ratio of men who hoped that their partners would continue their careers rose from 11% to 33%. While there were once many men who expected their wives to stay at home, they have become increasingly rare.

Meanwhile, the 34% of women who wished to be full-time housewives in 1987 fell to 20% in 2010. By contrast, the proportion who wanted to balance family and career rose from 19% to 31%. Trends for expectations were similar, with those predicting a future as a full-time homemaker sliding from 24% to 9% and those who saw their likely role as balancing family and career increasing from 15% to 25%. The highest rise in women’s expected future paths, however, was for the pattern of remaining single and continuing to work (from 7% to 18%). If it is hard to be a full-time homemaker, it is certainly not easy to balance a job with housework and raising children. But above all else, in present-day Japan just getting married itself is becoming more and more difficult.