Society Mar 10, 2016
No single municipality suffered more from the March 2011 tsunami than Ishinomaki in Miyagi Prefecture, where the disaster claimed 3,500 lives and destroyed 20,000 buildings. British citizen and longtime Ishinomaki resident Richard Halberstadt, a passionate advocate for his adopted city, spoke with us about his 23-year relationship with the town and shared his perspective on the long and arduous road to reconstruction. 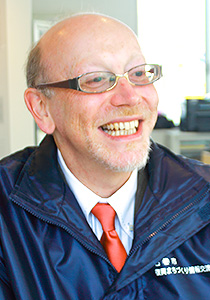 Director, Ishinomaki Community & Info Center. Born in 1965 in Reading, England. Graduated from SOAS University of London and received his master’s degree in literature from the University of Reading. Accepted a teaching position at Ishinomaki Senshū University in 1993 and has lived in Ishinomaki ever since. Was at work in his office on campus on March 11, 2011, when the city was devastated by the Great East Japan Earthquake and tsunami. Though urged by the British Embassy to leave the country to avoid possible fallout from the crippled Fukushima Daiichi Nuclear Power Plant, Halberstadt chose to remain in his adopted community and assist in its recovery and reconstruction. Assumed his current post in March 2015.

Ishinomaki, the second-largest city in Miyagi Prefecture, was one of the municipalities hardest hit by the tsunami of March 2011. But it has also proved itself one of the most resilient communities in the wake of the disaster, thanks in large part to the indefatigable commitment of residents like British citizen Richard Halberstadt, director of the Ishinomaki Community & Info Center.

Located about seven minutes from JR Ishinomaki Station by foot, the ICIC was established in 2015 to inform and educate visitors from near and far about the tsunami and the progress of post-disaster reconstruction. Through literature, exhibits, and explanations in Japanese and English, the center helps disseminate information about Ishinomaki and share important lessons in emergency preparedness. About 19,000 people have visited over the past year.

To carry out these functions, the ICIC is equipped with a staff of just three people, including the director. Halberstadt was tapped for that role in recognition of his bilingual communication skills and his contributions to the community before and after the disaster.

“I’m not a leader by nature,” he says. “But a good friend told me that this was something I could do for Ishinomaki: to serve as an international booster for the city and make sure that support continued to flow in.”

Like many tsunami survivors, Halberstadt began to rethink his purpose in life in the disaster’s aftermath.

“Having been spared while friends of mine perished, I began to feel that I had a duty to live life on their behalf as well. When the ICIC opened, I had a feeling that this was my purpose. I can spread the word about what a great community Ishinomaki is, and being bilingual helps me reach a wider audience. People come here from all over the world to see what it’s like in the stricken area and to learn from the disaster. When someone tells me how helpful it was to hear a coherent explanation in English, I feel that what I’m doing is really worthwhile.”

From Gaijin to Pillar of the Community

Halberstadt first came to Japan in the 1980s, soon after graduating from college, to teach English at a high school in the city of Tsuruoka, Yamagata Prefecture. By the time he returned to England two years later, he was a confirmed Japanophile. After earning his master’s degree, he accepted a teaching position at Ishinomaki Senshū University in 1993.

At first, Halberstadt confesses, he felt a little like a fish out of water. But that changed soon enough. The community had launched a tourism campaign focused on a replica of the San Juan Bautista, a Western-style galleon built in Japan in 1613. Commissioned by the daimyō of Sendai, the San Juan Bautista transported the famous Keichō Embassy across the Pacific on its way to the Vatican. The Ishinomaki Junior Chamber took part in the local campaign by staging a theatrical production reenacting the story of the historic ship’s construction. Asked if he would play the role of the European who came to Japan to provide instruction in Western shipbuilding methods, Halberstadt thought, ‘If they need me, why not?’”

Through his involvement in the production, Halberstadt quickly got to know some of the city’s young business leaders, and his circle of acquaintances grew exponentially. He himself became an active member of the local JC.

In 2003, Halberstadt was granted permanent resident status. By then his affable, open nature had won the locals over. The residents treated him not as a gaijin but as a person just like them—as Richard. He attended their parties and weddings. He even helped friends and neighbors with funerals. He had become a bona fide member of the community.

Returning to the Scene of the Disaster

Richard Halberstadt was in his school office when the Great East Japan earthquake struck at 2:46 pm on March 11, 2011. The tremor, which registered upper 6 on the seismic intensity scale, continued for five terrifying minutes. Because of its inland location, the campus escaped tsunami damage, but Halberstadt and his colleagues remained stranded there for three full days, relying on the radio for information.

As more and more evacuees took refuge on the campus, Halberstadt realized that the situation in town was dire. But it was not until the fourteenth that he set foot in the tsunami-stricken city and witnessed the devastation for himself. “So, this is what a catastrophe looks like,” he thought. That day Halberstadt sought refuge at a hotel run by a friend of his, which was serving as an emergency shelter. It was then that he learned that the entire family of one of his closest friends had perished in the tsunami.

Impact of the 2011 Disaster in Ishinomaki

Halberstadt still has the email from the British Embassy that he received on his cellphone on March 17. Anticipating a worst-case scenario at the Fukushima Daiichi Nuclear Power Plant, the embassy was contacting British citizens throughout eastern Japan—including the Tokyo region—and advising them to leave the country to avoid radiation exposure. On March 19, an embassy vehicle picked Halberstadt up and drove him to Sendai in preparation for repatriation. But no sooner had he arrived in Sendai than he began to realize he had made a mistake. After lying awake all night thinking about it, he resolved to return to Ishinomaki.

“Some of my friends here were urging me to go back to England,” he recalls. “They were saying, ‘It’s your job to go back and collect disaster supplies and donations for Ishinomaki.’ But I knew I’d never forgive myself if I abandoned my friends in their hour of need. I had already parted tearfully with them and gotten as far as Sendai, but in the end the desire to go back and help rebuild was stronger. The night after I returned to Ishinomaki on March 20, I slept soundly for the first time since the earthquake. I think it was out of relief at having made the right decision.”

Five years have gone by. In central Ishinomaki, the tsunami’s scars have faded. The sounds of construction fill the air as commercial developments and public housing spring up. Ishinomaki Municipal Hospital, which was damaged beyond repair, is being rebuilt near Ishinomaki station, at a safe distance from the coast.

The town’s all-important fishing industry is making a comeback as well. In 2015, commercial landings were valued at ¥18 billion, about the same as in 2010, though they were still down about 20% by weight from pre-quake levels. Ishinomaki Fish Market—the public face of the town’s fishing industry—was rebuilt and finally resumed full-scale operations in September 2015. 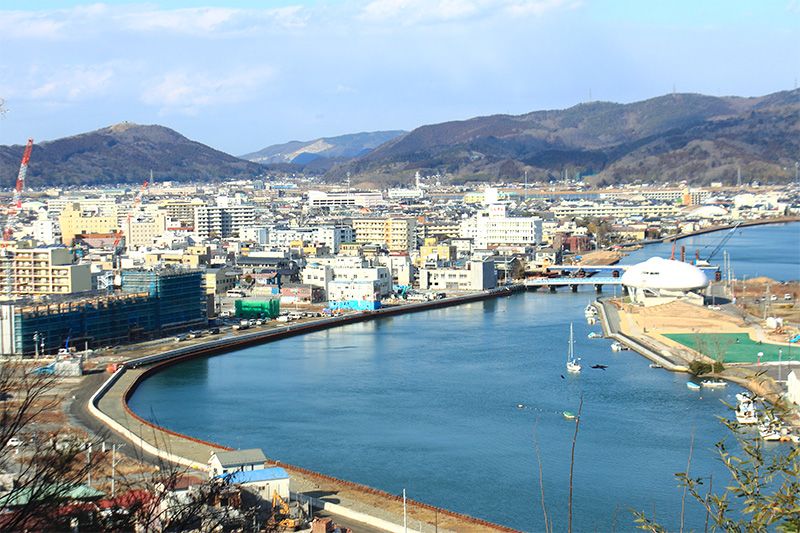 Ishinomaki’s commercial center along the banks of the Kitakami River. 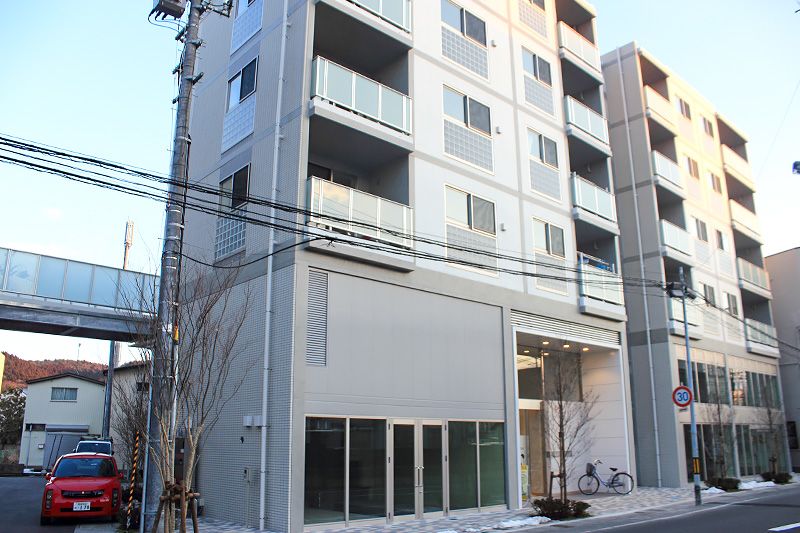 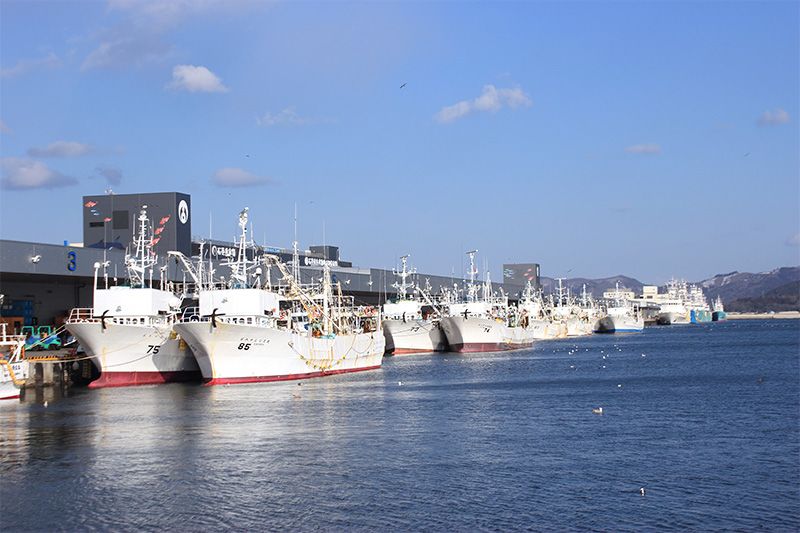 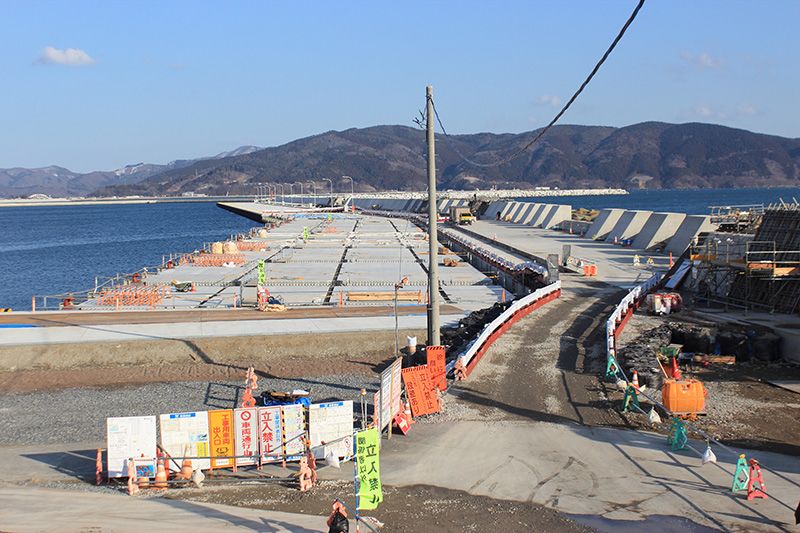 The hard-hit neighborhoods of Minamihama and Kadonowaki near the mouth of the Kitakami River present a different picture. The rubble has been cleared, but new residential construction is prohibited, and much of the area remains a barren waste. As of January 2015, about 16,000 Ishinomaki residents were still living in temporary housing, down from 32,000 at the peak of the crisis. Only about 60% of the roughly 200 marine-products processing facilities operating in the city before the disaster have reopened. According to preliminary estimates from the latest Population Census, the city’s population in 2015 was 147,236, down 8.5% from 2010. 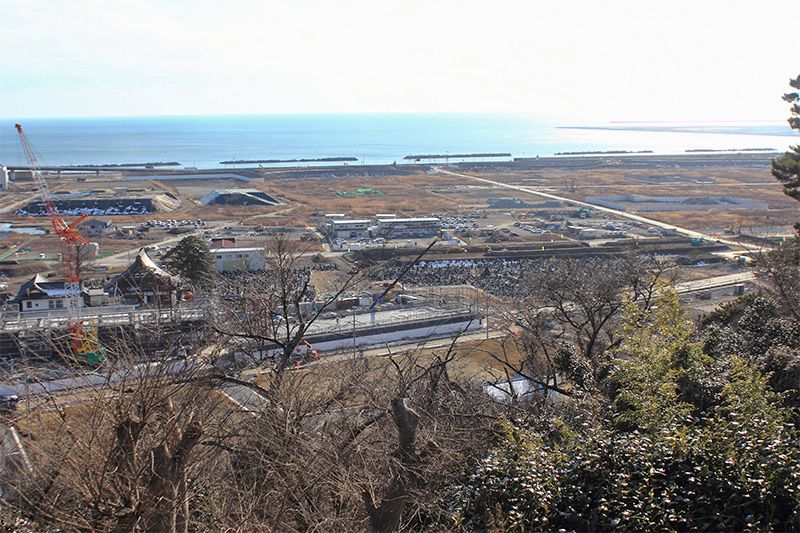 The Minamihama and Kadonowaki as seen today from Mount Hiyori. 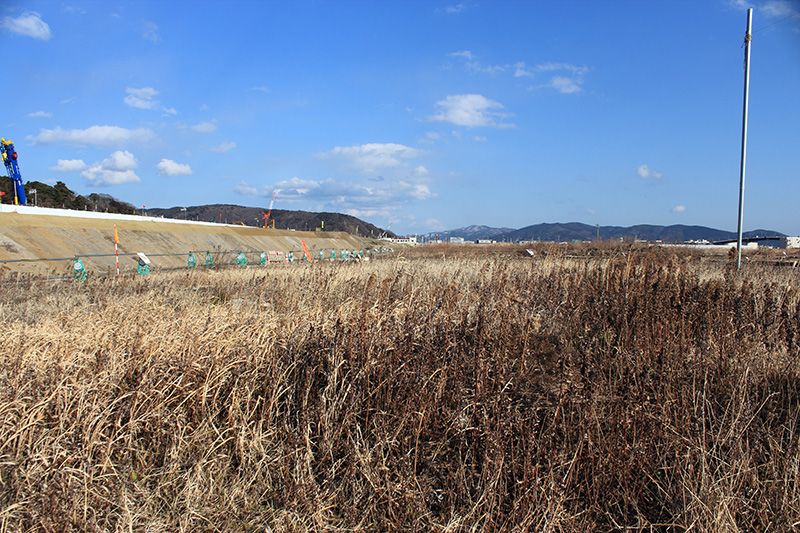 People who visit the ICIC often ask how reconstruction is going. “It’s a difficult question to answer,” says Halberstadt. The city of Ishinomaki covers a large area, and progress has not been uniform.

“While the city center was certainly devastated, it retained some semblance of its original form,” he explains. “But the Ogatsu district in the northeast was basically obliterated, so they had to start over from scratch. Each area has its own challenges.”

How one assesses the pace of recovery depends on one’s perspective. “Just looking at all the replacement housing going up makes you think reconstruction is proceeding smoothly,” says Halberstadt. “But if you think about the frustration and anxiety of people still stuck in prefab temporary housing after five years, you can certainly understand their impatience with the pace of reconstruction.”

The loss of community ties is another serious issue. “People living in temporary housing complexes gradually built their own communities there,” he says. “As they move into replacement housing, they have to start all over again. And a lot of them are elderly and living alone, so it can be really tough.”

Halberstadt, of course, is hopeful about the future of his adopted home. “The shape of the city was fundamentally altered by the earthquake and tsunami. All we can do now is make the most of this situation by steering the redevelopment process in a positive direction. It’s an opportunity to revitalize and repopulate a city that was in decline,” he says. Halberstadt is encouraged by the young people who have moved to Ishinomaki after spending time there as volunteers and the nonprofits that have launched community-building projects from their headquarters in previously abandoned neighborhoods. “We’re beginning to see young people walking around downtown. They could make a huge difference in terms of revitalizing the community.”

Halberstadt describes the past five years as a period of feverish effort in support of a monumental task that is far from over. But the media and the public have gradually lost interest in the plight of the disaster-stricken communities. Halberstadt says there has been a conspicuous drop in the number of visitors to Ishinomaki over the past two years.

Moreover, while more international tourists are visiting Japan than ever before, few of them choose the Tōhoku region as a destination, much to the dismay of the local tourism and hospitality industries. “We have no problem at all accommodating tourists,” insists the proprietor of a nearby dining and drinking establishment. “I’m afraid people have the wrong idea about the area, and that’s a real shame.”

The city is no longer in shambles. The rubble is gone. The demand for volunteers has greatly diminished. “But we still need people’s help, even if it’s just in the form of tourists coming to buy our products and support our economy,” says Halberstadt. “I tell everyone who comes through here, 'Please don’t forget about us. Come back and see us again.' If they go home with memories of Ishinomaki and a better awareness of disaster preparedness, then I feel we’ve done our job.”