Economy Society Work Nov 22, 2018
The Japanese government opening the door to unskilled foreign farm labor is the latest and most dramatic step to address labor shortages that threaten the survival of the nation’s agriculture industry. Journalist Aoyama Hiroko illuminates the forces driving recent policy changes while stressing the need for industry-level efforts to make Japan an attractive destination for migrant farm workers.

In the latest Basic Policy on Economic and Fiscal Management and Reform, announced in June 2018, the cabinet of Prime Minister Abe Shinzō unveiled plans to admit lower-skilled foreign workers in industries facing acute labor shortages, including agriculture. For Japan’s struggling farm industry, the policy shift has not come a moment too soon. But new immigration laws cannot guarantee the future of Japanese farming unless accompanied by efforts to boost productivity and ensure decent labor and living conditions.

Sea Change in the Farm Sector

Small-scale family farms dominated Japanese agriculture for most of the postwar era, but the industry’s structure is changing rapidly. Farmers have been retiring in ever-growing numbers, often without successors. In an effort to sustain and revitalize the industry, the government has actively encouraged the consolidation of farmland under the management of business-oriented operators. In the past decade, Japan’s total population of “core farmers”—that is, self-employed farmers engaged mainly in farming—has fallen from more than 2 million to just over 1.5 million (as of 2017), a drop of about 25%. While the majority of Japanese farms are still family owned and operated, corporate farming is on the rise. Between 2011 and 2017, the number of farms under corporate management rose from 14,000 to 23,000—an increase of 60%—and the government has set a target of 50,000 corporate farms by 2023.

This trend has been accompanied by an increase in the number of permanent farm employees (as opposed to family members and part-time or seasonal workers). The number of such employees rose from 180,000 in 2011 to 240,000 in 2017. Yet many more farm workers are needed to sustain the rise of large-scale corporate farming.

In April 2016, the Japan Agricultural Corporations Association and other key industry players, including the Japan Agricultural Cooperatives group,(*1) formed a council  dedicated to formulating and promoting measures to alleviate the farm labor shortage. According to the council, restructuring of the farm sector has outpaced the capacity of producers to recruit Japanese workers. It estimates that the current labor shortage amounts to about 70,000 full-time employees and predicts that the unmet demand will swell to 130,000 over the next five years.

The farm industry has not sat idly by while the labor shortage has mounted. Producers have actively recruited across the social spectrum and have boosted their hiring of women, senior citizens, and disabled persons. Many farms have introduced high-tech machinery and digital technology—including robots and drones—to save labor and boost efficiency. However, the competitiveness of Japanese agriculture depends largely on premium-quality produce that demands labor-intensive cultivation and handling. While mechanization has made considerable progress in certain areas, such as rice cultivation, fruit and vegetable farmers are still heavily dependent on manual labor.

The use of foreign labor to alleviate the farm labor shortage is not a new idea. Today an estimated 25,000 foreign nationals are working on Japanese farms under the Technical Intern Training Program (TITP), first introduced back in the 1990s. Some producers confess that their operations would be unsustainable without these “trainees.”

However, farms that participate in the program operate under a variety of constraints. For one thing, the program sets a cap on the number of interns per farm. In addition, trainees can only be placed in certain categories of workplace and assigned certain types of work. Unskilled, repetitive labor is regarded as incompatible with the ostensible purpose of the program (to transfer skills to other countries). Initially, moreover, the system limited the length of stay (training period) to three years. Many producers complained about the time and investment poured into unskilled trainees, only to see them leave as soon as they became proficient.

In the past year or so, however, the government has taken decisive steps to loosen restrictions on the admission and use of foreign farm labor.

A New Wave of Reforms

As a first step, it extended the maximum period of stay from three to five years for foreign trainees under the supervision of businesses or other receiving organizations meeting specified criteria for excellence. This change was incorporated in legislation that went into effect in November 2017.

Next, the government took advantage of the Act on National Strategic Special Zones to legalize the admission and employment of foreign agricultural workers (as opposed to “trainees”) in designated zones eligible for special regulatory exemptions. To address concerns about labor exploitation and rights violations that had emerged under the TITP, the new program calls for the placement of eligible workers through authorized recruitment agencies and establishes an oversight apparatus to ensure compliance with program rules and labor standards. It places no restriction on the number of foreign workers at a given farm or facility, but it does limit the length of stay to three years. Aichi Prefecture, one of 10 national strategic special zones, was the first to sign on to the program; it announced the selection of an authorized recruitment agency in August 2018.

Still, most of Japan’s agricultural production base lies outside of these zones. Producers who depend on foreign trainees under the TITP were left wondering why the admission of foreign farm workers should be restricted in this manner.

“A lot of producers would like to expand the scale of their operations if only they could find the workers,” notes Kondō Kazumi of the Southern Nagasaki Farmers’ Union, a cooperative with a membership of about 120 farms on the Shimabara Peninsula of Nagasaki Prefecture. He worries that if farmers are unable to secure the human resources to support expansion, domestic production will plummet as the population of farmers dwindles, and imports will rush in to fill the vacuum. “Unless the government relaxes its regulations, agricultural imports are bound to rise. Rather than limit the program to special zones, they need to lift the prohibition [on foreign labor] nationwide as soon as possible.”

In June, the cabinet unveiled plans to do just that. As part of the 2018 Basic Policy on Economic and Fiscal Management and Reform, the government hopes to open the door to guest workers in specified industries, including agriculture, with a maximum stay of five years. Graduates of the TITP would be among those eligible for the new working visa. Those entering under the training program would thus be eligible to live and work in Japan for a period of 10 years all told.

Taking Responsibility at the Industry Level

All of this is good news for the farm sector. But to make the most of these reforms and secure a steady supply of labor, the industry needs to put its own house in order.

What this means, first of all, is establishing and enforcing industry standards to ensure that needs of guest workers are met and their rights respected. The Technical Intern Training Program has been plagued by labor violations and human-rights abuses, including the denial of fair compensation and the confiscation of passports to prevent trainees from leaving. Each year about 200 such cases come to the attention of the Ministry of Justice, and the farm and fisheries sector accounts for the largest share—almost a third of the total. The TITP has been cited in US reports on human trafficking for failing to protect the rights of foreign workers.

I should stress that the farmers I have personally encountered in covering the TITP have been exemplary in their recruitment and treatment of trainees. Many go to the trouble and expense of conducting face-to-face interviews with candidates in the country of origin, some even calling on the candidates’ families to explain the nature and content of the internship. 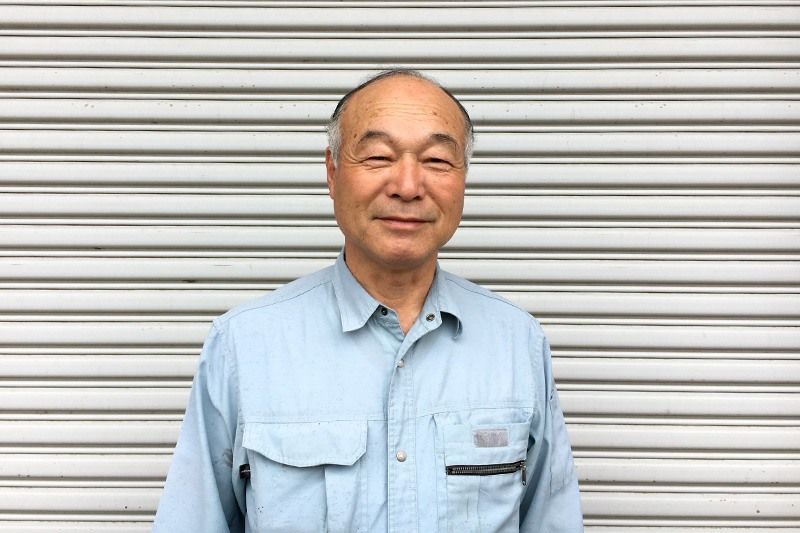 Furukawa Hiromu of Kosen Farm in Kagoshima Prefecture is one such example. A producer of chickens, eggs, vegetables, and pickles, Furukawa’s farm currently hosts six trainees from Vietnam. “Whenever I have an issue I want to bring to the attention of the workers, I always convey it to everyone, trainees and Japanese staff equally, so that no one will feel humiliated,” says Furukawa.

But it is not enough that most producers play by the rules. Even a few isolated cases of abuse could bring the new program into disrepute and cause the door to slam shut once again. The industry should learn from the example of South Korea, which lifted its ban on low-skilled foreign labor about 15 years ago. Cognizant of past human-rights violations, the National Agricultural Cooperative Federation compiled a video manual and distributed it to farms employing foreign workers. Japan’s farm industry should take similar steps. 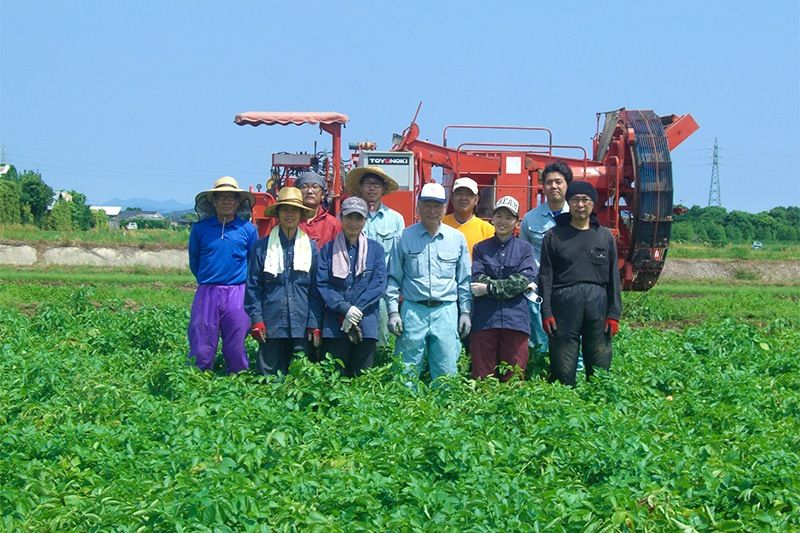 Furukawa with his team of core employees.

Another area in which the industry needs to take action is labor productivity. Productivity in Japan’s agriculture, forestry, and fishery sectors has actually been declining since the second half of the 1990s, according to Umemoto Masaki, director-general of the National Agriculture and Food Research Organization. For a while, yields were on the rise, thanks to the use of chemical fertilizers and improved crop varieties. Farmers were also investing in mechanization for greater efficiency. But progress on these fronts has stalled over the past two decades.

If Japanese farms fail to boost their productivity, they will be unable to offer higher wages, which will limit their ability to attract workers from abroad. Japan is competing with other industrially advanced countries in the Asian region and around the world for labor from developing countries. When I traveled to the Netherlands and Denmark to study their farm policies and practices several years ago, the hourly wage for foreign farm workers was equivalent to more than ¥2,500. “The supply of foreign labor could dry up unless we can increase productivity enough to offer internationally competitive wages,” acknowledges Furukawa.

Immigration reforms that open the door to the hiring of unskilled foreign workers will doubtless yield benefits for Japan’s farm sector over the medium term. But the new legal framework must be accompanied by changes in the attitudes of producers and increases in labor productivity to ensure the long-term survival and growth of Japanese agriculture.