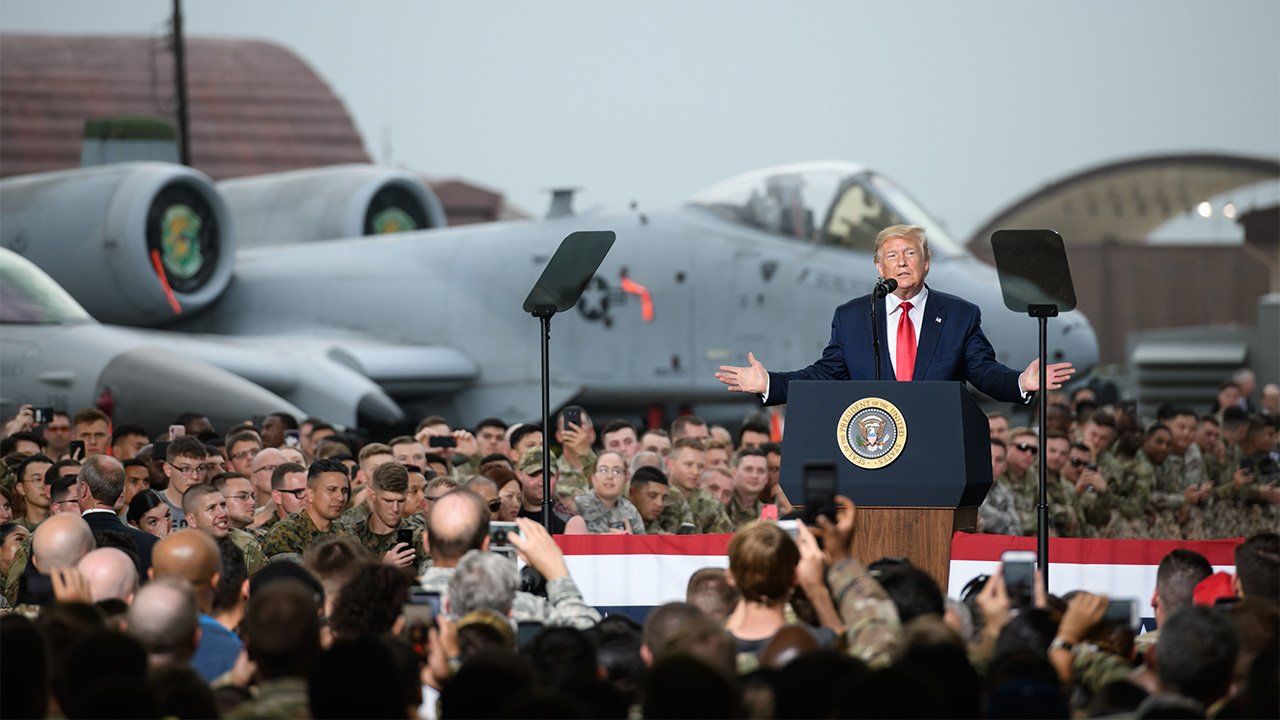 Trump’s Fatal Blind Spot: The Military in US Society

Politics Mar 29, 2021
US President Donald Trump’s inability to understand the US military’s spiritual values and its quasi-religious status in American society made him unfit for the office of president, argues theologian Morimoto Anri.

Throughout his political career, former President Donald Trump has demonstrated a natural flair for quickly—almost intuitively—grasping the dynamics of an issue, situation, or institution. Yet for some reason, his instinct has failed him where the US military is concerned. It is not that he is ignorant of the US Armed Forces; having been president, he probably knows them inside and out. But knowledge and understanding are two different things. And Trump, it is clear, does not understand the profound symbolic significance of the military in American society.

A Bulwark for Democracy

Interestingly, it is a blind spot he shares with the Japanese people. In the pro-democracy, pacifist climate that arose in Japan after World War II, the armed forces were viewed with deep suspicion and distaste. As a result, there was little open discussion of the military’s institutional function in a peace-loving democratic society, and even less appreciation for it on an emotional level. The result is that the Japanese—much like Trump, albeit for different reasons—lack a basic understanding of the military’s role in peacetime.

What, then, is that role? Quite simply, the military is a bulwark, defending and upholding the legitimacy of the country’s democratic governing structure. It is not the source of a democratic regime’s legitimacy; that derives from such internal attributes and mechanisms as free and fair elections, the rule of law, due process, separation of powers, and checks and balances. The military, however, is an external bulwark that protects democracy in an apolitical manner, without interfering in the political process—a point stressed by Chairman of the Joint Chiefs of Staff Mark Milley, both before the November 3, 2020, presidential election and during the turbulent transfer of power this past January. The recent news from Myanmar drives home the need to keep the military outside the political system.

Of course, Trump loves the physical might of the military, and he could not be indifferent to the fact that the US Armed Forces are by far the most formidable instrument of lawful violence in the world. But his appreciation stopped there. As US president, and therefore commander-in-chief of the armed forces, Trump seems to have imagined that he could use them for his own purposes, like a child with a box of toy soldiers.

What Trump failed to realize is that, in almost every country in the world, the military is an elite corps with a high degree of discipline and autonomy and a long tradition of emphasis on honor and pride. While it is true that democratic states uphold the principle of civilian control over the military, that does not imply that top political leaders can order generals about on a whim. Civilian control is a two-way street in that it assumes that political leaders will listen carefully to the advice of experienced military officers before making decisions involving the military.

But all of this was beyond Trump’s grasp, and it is not hard to see why. First, Trump is baffled by anything that does not go according to his wishes. Beyond that, however, he is incapable of understanding higher spiritual values, such as selfless service or devotion to a greater cause. Small wonder he failed to understand the US military.

The tensions stemming from this failure emerged even before Trump took office. During the 2016 election campaign, he provoked the ire of military personnel by denigrating the war record of Senator John McCain and responding with insults to comments by the father of a slain Muslim serviceman. Top-ranking uniformed officers felt compelled to publicly repudiate his reckless statements calling for US forces to seize oil from the Middle East or use waterboarding on suspected terrorists. With respect to the latter issue, Marine General Joseph Dunford, then chairman of the Joint Chiefs of Staff, testified before Congress that such inhumane conduct, in addition to being illegal, was “inconsistent with the values of our nation” and would undermine military morale. When informed that the use of torture by military personnel was a violation of international treaties, Trump responded by criticizing the agreements and the US leaders who had signed them and calling America’s generals spineless.

Undermining His Own Authority

Such statements by Trump did more than undermine his credibility with the military; they cast doubt on his ability to function as commander-in-chief. During the presidential campaign, former National Security Agency Director Michael Hayden speculated that the military would simply refuse an order from the president to use waterboarding or other forms of torture. Indeed, although the ethical and legal implications continue to be debated, the prevailing view since the Nuremberg trials is that soldiers should not follow superior orders to commit unlawful or morally indefensible acts. A president who issued such an order would thus lose his authority as commander-in-chief, leaving the military to act on its own judgment. This would be tantamount to a coup, although one in which the military would preserve the legitimacy of American democracy.

As president, Trump maintained high approval ratings among veterans. Among active-duty service members, however, support for Trump declined over the course of his presidency, and by August 2020—in the runup to the November election—troops with a negative view of Trump outnumbered supporters, according to a Military Times poll conducted that month.(*1) Disapproval among officers in particular seems to have spiked following the June incident in which Trump, threatening to deploy the military to put down nationwide demonstrations, walked to a church for a photo op after peaceful demonstrators had been forcibly cleared from Lafayette Square. By the time of the August poll, more armed service personnel were planning to vote for the Democratic candidate, (now President) Joseph Biden, than for Trump—a striking contrast to the results of the 2016 election, when Trump won twice as many military votes as his Democratic opponent, Hillary Clinton.

Nor did Trump’s attacks on the integrity of mail-in ballots endear him to veterans and active-duty troops. After all, US service members have long relied on absentee ballots to exercise their voting rights while stationed or deployed overseas to defend their country.

After the election, as Trump persisted in his claims of widespread voter fraud, the president’s inner circle, including a former top advisor, urged the president to use the military to “rerun the election,” but the idea was abandoned in the face of adamant opposition from top military figures.(*2) The integrity of the US military may well have saved American democracy.

Americans and the Military Mystique

In the foregoing, I have focused on the military as an institution, but I would also like to touch on the esteem it enjoys among the American people, since this speaks to the most serious aspect of Trump’s misunderstanding.

The armed forces have a very special place in the hearts and minds of most Americans. Republicans and Democrats alike view a record of military service as one of the top qualifications for anyone aspiring to the office of president—more important than previous experience in public office, success managing a business, or religious faith. (Trump, it might be noted, received a deferment from the draft during the Vietnam War for a foot problem.)

At a time when so many Americans have lost confidence in such institutions as Congress, the police, and the church, they continue to express confidence in the armed forces. Part of this doubtless derives from the military’s tradition of discipline and integrity, a must for any organization trained to wield raw physical force. Moreover, because the military is entrusted with people’s lives and the security of the nation, it is invested with an almost religious prestige and authority. Its elaborate system of ranks, customs and courtesies, and decorations and awards serve to maintain that aura.

This attitude toward the military has frequently found expression in the American cinema, even over the past few decades. One example is the 1990 film adaptation of William Golding’s Lord of the Flies. Like the novel, the film portrays a group of schoolboys shipwrecked on an uninhabited island and their descent into savagery in a lawless, unsupervised environment. The climactic scene finds the protagonist desperately fleeing his murderous rivals as they set fire to the jungle. Collapsing on the beach, he sees before him the figure of a US Marine Corps officer who has just arrived to investigate the source of the smoke. For the boy, he is literally a savior, as well as a symbol of order and legitimate authority.

A comparable scene occurs in the 2007 horror film The Mist, written and directed by Frank Darabont based on the Stephen King novella of the same name. A small rural town is enveloped in a thick fog that conceals terrifying monsters, who seize the townspeople one after the other. The situation also causes residents to turn on one another. Finally, the protagonist, David, makes a last-ditch attempt to escape by car with his son and three other survivors, but they run out of gas. In despair, the group opts for suicide, and David uses his last bullets to shoot the other three. He leaves the car, resigned to be taken by the creatures. Instead, what emerges from the lifting mist are military tanks and trucks that have been rescuing survivors and exterminating the creatures. Once again, the US military is the ultimate savior with the power to rescue the world from mythic destruction and the legitimacy to restore order.

For the majority of Americans, the US Armed Forces represent not just immense military might but also the embodiment of such spiritual values as honor, pride, and self-sacrifice, and this is the reason they are among the few institutions whose authority is still respected in US society. In peacetime in particular, the military exists as a stalwart, apolitical guarantor of justice and order, thereby playing a vital role in maintaining the credibility and stability of democratic society as a whole. No one who fails to grasp this symbolic import and appreciate its importance can function effectively as president of the United States.

(Originally written in Japanese. Banner photo: Then US President Donald Trump speaking to Americans at Osan Air Base in South Korea after meeting with North Korean leader Kim Jong-un at Panmunjom, June 30, 2019. © AFP/Jiji.)