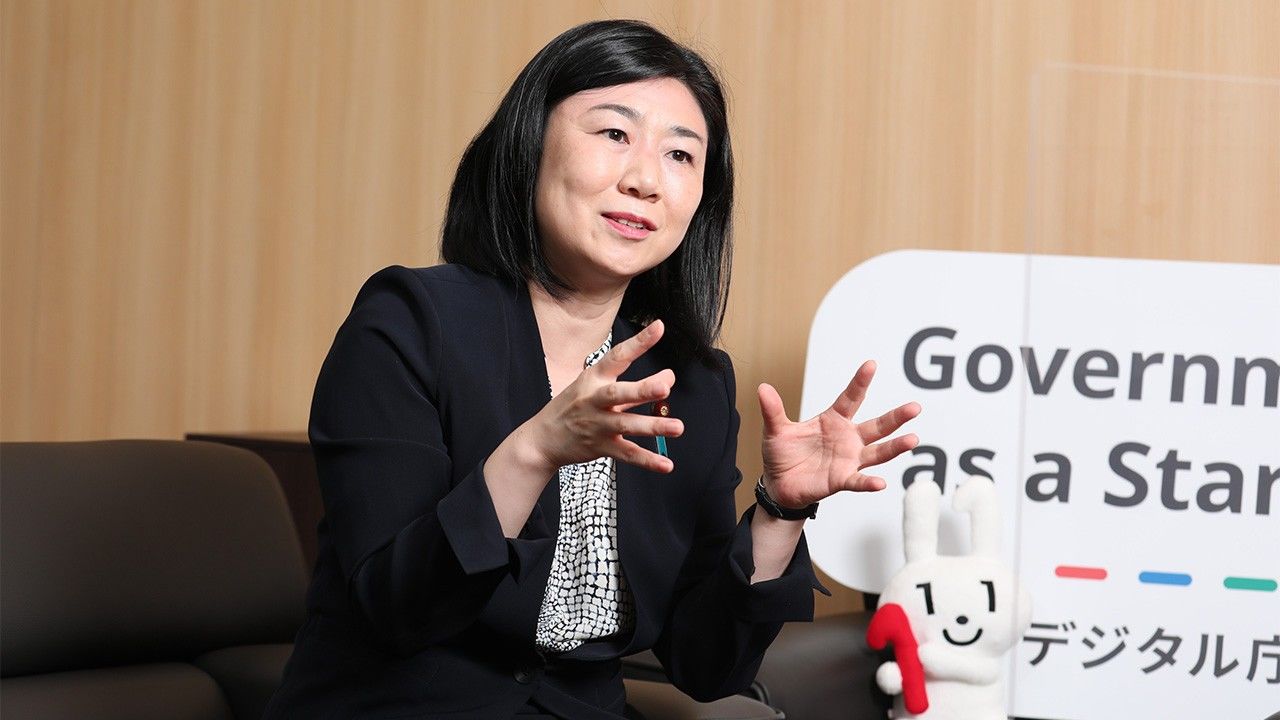 A Digital Future for Japanese Government: Makishima Karen on the Role of the Digital Agency

Politics Aug 16, 2022
An interview with Makishima Karen, until August 2022 Japan’s state minister for digital affairs, on the current situation at the Digital Agency, established in September 2021, and ongoing projects such as the Government Cloud, now under development.

Member of the House of Representatives (Kanagawa 17th district), minister for digital affairs, minister in charge of administrative reform, and minister of state for regulatory reform. Member of the Liberal Democratic Party. Born in Kanagawa Prefecture in 1976. She received her master’s degree from George Washington University and her PhD in political science and public administration from International Christian University. First elected to the lower house in 2012; currently in her fourth term. Held positions including parliamentary vice-minister of the Cabinet Office and head of the LDP Youth Division before being appointed as digital minister in October 2021.

This interview took place on June 30, 2022. On August 10, Prime Minister Kishida Fumio reshuffled his cabinet, giving the Digital Agency portfolio to Kōno Tarō. While the basic direction of the government’s digital policy is not expected to change significantly, some of the details discussed below may change under new leadership.

TAKENAKA HARUKATA  I’d like to ask you about the governance of Japan’s Digital Agency. Ishikura Yōko, the chief officer of the agency at the time of its launch in September 2021, resigned in April due to health reasons, and Asanuma Takashi took over the role. Furthermore, people slated for certain positions were unable to take them up. What is your view of the apparent disorder in top-level human resource management?

MAKISHIMA KAREN  It’s been ten months since the launch of the Digital Agency, and September will mark one year. The agency was created in a totally different manner from any other Japanese government department, and we’re striving to leverage its unique potential to the utmost. The top administrative officials at other ministries and agencies come from the ranks of the bureaucracy, but the chief officer, the corresponding figure in the agency, is from the private sector, which is a radical difference. For me, this is symbolic of its nature as a collaboration between the public and private sectors.

In forming the organization, I believe we were able to make a strong start under Ms. Ishikura—an expert in fields like management strategy and management systems. She was determined to establish the structure of the Digital Agency to a certain degree to be able to hand the reins to a successor. Transferring her responsibilities to Mr. Asanuma, a member of the agency who hails from the private sector, was in line with her intentions. He was nurtured as a successor from within the agency, based on his past experience as a chief design officer.

Asanuma describes the essence of design as resolution of issues through a human-centric approach. He’s a specialist in the field of communication and I believe he can competently communicate the policies being implemented by the agency, clarifying the benefits that digital transformation will have in our lives.

TAKENAKA  How is the fusion of public and private talent progressing in the organization? How do you view incidents such as that reported in some media, where ten ex-private-sector members resigned simultaneously?

MAKISHIMA  The Digital Agency currently has around 700 staff. In April, we conducted our inaugural mass-hire, taking around 250 from the private sector, including contracted staff. Some of these people work for us two or three days a week, which is another difference between us and other departments. I’d like to make clear that media reports that a number of young people resigned from the agency are not accurate—they merely left at the end of their contracts. The end of March, as the end of the government’s fiscal year, is a period when certain staff return to the companies they originally came from. It’s completely normal to see staff changes at this time. Some had worked with us for over two years, since the time of the office established to set up the agency, and this was a normal changing of the guard.

Beyond the public-private blend, there are differences in the work culture between ours and many other government departments. This is because we have people from differing backgrounds, which we should view as a very positive factor. In regard to our work style, the practice of remote work is ingrained, and not only for public servants at the agency—only 35% of our staff come to the offices to work. But we have also encouraged use of polite language, which is the norm in government agencies, and worked to develop more solid communication, as well as addressing other aspects we deemed necessary.

Many of our staff have expressed a desire to learn about more than just the tasks they directly handle, and requested opportunities to do so. We have responded to their requests for this proactively, and increasing such opportunities since last year. 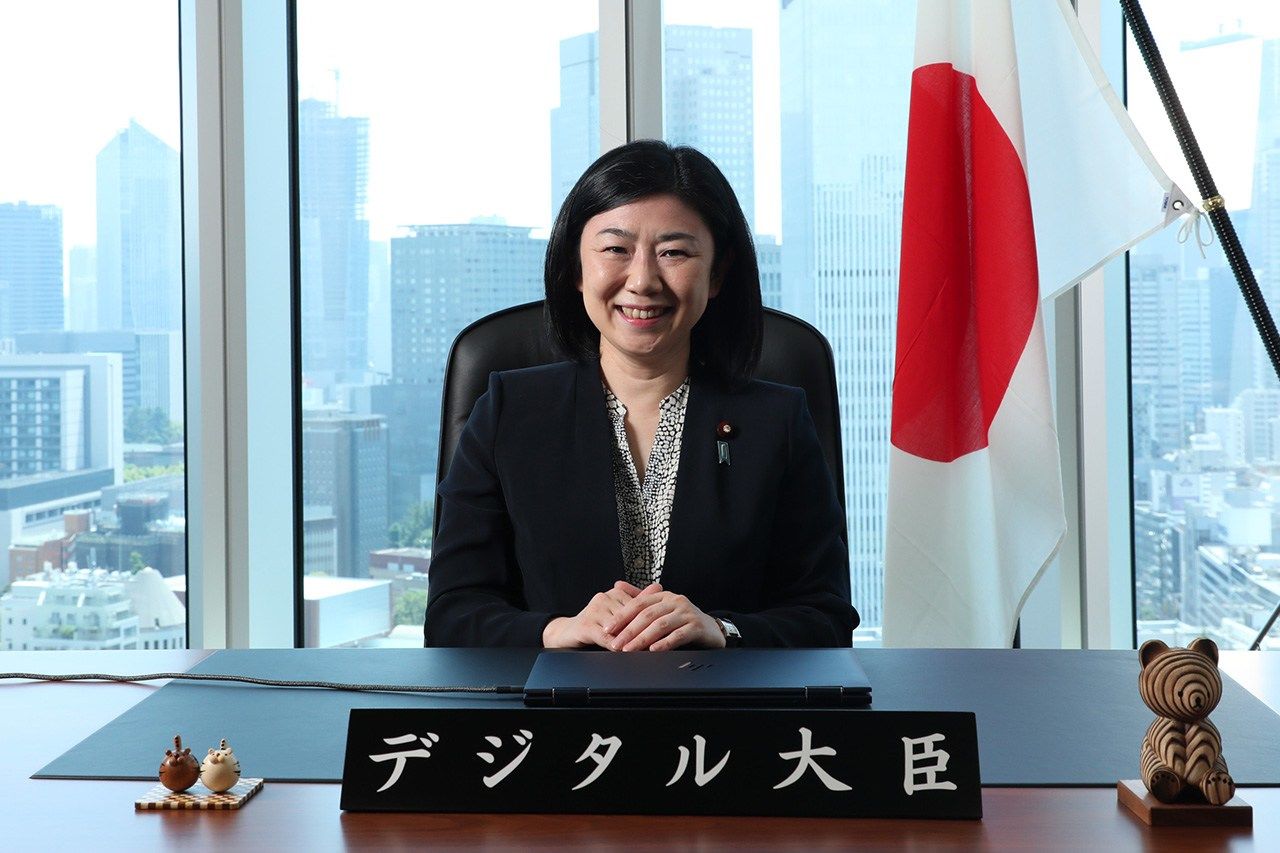 TAKENAKA  One major Digital Agency project is to establish and operate computer systems for the central and local governments. These are divided into three categories: first, Digital Agency systems, second, systems shared among the agency and other departments, and third, systems for each government department. Evidently, the agency has proposed to undertake the first two itself, but I’d like to know what kind of systems fall under the respective categories, and how work is progressing on the joint systems.

MAKISHIMA  The first category refers to the national information system that will be foundational to systems shared among or established separately by each department. This is our most pressing task, as well as one that’s important for political reasons, so the Digital Agency is charged with its development and operation.

Examples are the Government Cloud, a service that will be shared across the government. There’s also a network environment that provides both convenience and security, based on zero-trust architecture to defend against increasingly sophisticated threats. And there’s the Government Solution Service, a standardized environment provided for local governments to use in executing their business.

The second category of system will be established through collaborative projects between the agency and each department, with the operation being the responsibility of the respective department. One example is the Vaccination Record System. Category three refers to all other national information systems. While each government department and agency is responsible for building and operating systems to handle its particular duties, the Digital Agency will propose common policies to ensure systems are synchronized, and will also provide technological advice.

TAKENAKA  What major changes will be wrought by the introduction of the Government Cloud?

MAKISHIMA  A major outcome will be that Japan’s 1,741 municipal governments will no longer need to construct their own systems. However, this does not mean that all public systems in Japan will be based in the Government Cloud. The Digital Agency will naturally look at large-scale existing systems and consider whether they should be retained in their current form, or if there is an alternative.

TAKENAKA  Until now, government departments, agencies and local public entities have independently commissioned their systems—an extremely wasteful practice. From what you described, is it correct to conclude that the agency’s efforts will significantly reduce this?

MAKISHIMA  We have already agreed to unify or standardize twenty key systems for local authorities, so in these twenty areas at least, there will no longer be a need for municipalities to go to the trouble of creating something totally unconnected to what their neighbors might be using. It will be possible for them to efficiently and effectively choose from a range of standardized basic applications assembled on the Government Cloud. Resources that local authorities presently invest in systems can then be redirected toward services that their residents truly need. It’s our hope that all local governments will be using the Government Cloud by 2025.

TAKENAKA  Does this mean that you’ll consider systems for the pension, National Tax Agency, and so on separately from the Government Cloud?

MAKISHIMA  We’ve begun discussions on the second two categories of systems regarding how they will be operated, future prospects, and whether budgets and the ways tasks are handled should be reviewed.

TAKENAKA  What changes can we expect from shifting all costs for national information systems to the Digital Agency?

MAKISHIMA  It will enable us to provide advice to the various government departments based on the agency’s expertise. Because the agency is aware of details of systems used by other departments, we can assess whether there are more effective ways to handle issues and advise the departments regarding matters that they may not even perceive on their own. I believe this will deliver significant results.

TAKENAKA  Some have suggested that, from the perspective of economic security, at least part of the Government Cloud should have been commissioned through Japanese companies, whereas the contracts were awarded to Amazon and Google. Others contend that there were significant technological hurdles to that. What are your thoughts?

MAKISHIMA  We clearly indicated our requirements for the cloud. In addition, because we require a multicloud system, we aren’t limiting ourselves to one service provider, applying fair rules to select those meeting our conditions. The only way we can ensure security is that they meet these requirements. We must evaluate our options in terms of information confidentiality, but surely we should not differentiate between Japanese and foreign providers when evaluating their technological capability.