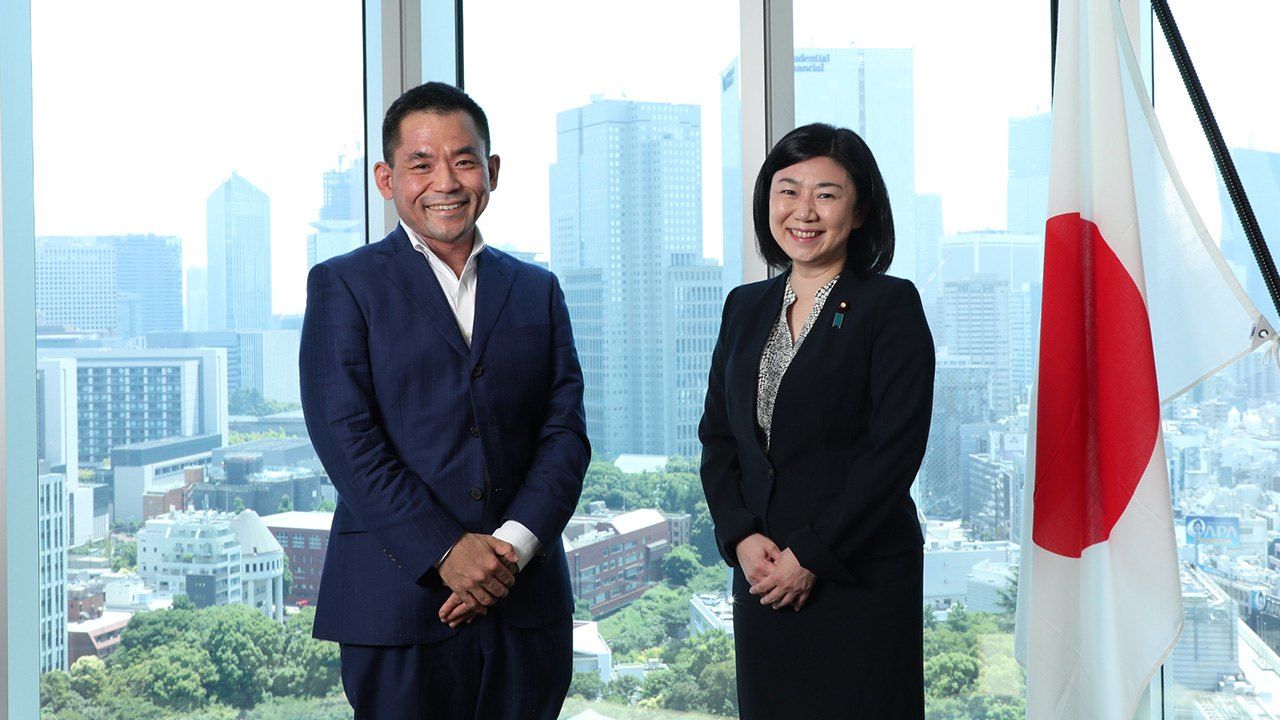 Politics Aug 16, 2022
In the second part of her interview, Digital Minister Makishima Karen talks about revising Japan’s “analog” regulations, streamlining government services, and the current status of the My Number card.

Member of the House of Representatives (Kanagawa 17th district), minister for digital affairs, minister in charge of administrative reform, and minister of state for regulatory reform. Member of the Liberal Democratic Party. Born in Kanagawa Prefecture in 1976. She received her master’s degree from George Washington University and her PhD in political science and public administration from International Christian University. First elected to the lower house in 2012; currently in her fourth term. Held positions including parliamentary vice-minister of the Cabinet Office and head of the LDP Youth Division before being appointed as digital minister in October 2021.

(Continued from part one of the interview.)

This interview took place on June 30, 2022. On August 10, Prime Minister Kishida Fumio reshuffled his cabinet, giving the Digital Agency portfolio to Kōno Tarō. While the basic direction of the government’s digital policy is not expected to change significantly, some of the details discussed below may change under new leadership.

TAKENAKA HARUKATA  Recently, the government announced its intention to revise nearly 4,000 clauses of laws and ordinances it deems as “analog” regulations, such as requirements for on-site inspections and in-person training. It has set forth a policy for the broad use of digital technology, dividing existing regulations into seven categories to address in three phases. What was the background to this approach?

MAKISHIMA KAREN  Japanese society has entered a phase of population decline, and certain workplaces face serious staffing shortages. The issue isn’t that we lack the technology to deal with this, but that it’s not being used. The reason in some cases is adherence to old habits or existing ways of doing things, but often the law actually stipulates on-site inspection or permanent stationing of personnel. Removing such obstacles will allow for the application of new technologies, letting us implement policies despite the population decline. We are promoting this on the basis that it will boost company profits and benefit workers.

TAKENAKA  A Digital Government Action Plan was ratified by the Cabinet in December 2020, during the administration of Suga Yoshihide, proposing the elimination of “analog” regulations. Are these moves under Prime Minister Kishida Fumio based upon this?

MAKISHIMA  The newly announced revisions apply to regulations with certain common characteristics, such as requirement of visual observation, regular surveys and inspections, or permanent appointment and stationing of personnel. By grouping these together and establishing phases to address them, we aim to make revisions both collectively and laterally. This is a new approach introduced under the Kishida administration.

TAKENAKA  You were chief secretary of the LDP Policy Research Council’s Special Committee on Digital Society Promotion, formed in 2020. This was when the Kishida administration was touting the “digital garden city state” concept to develop rural areas by applying advanced technologies. How has that continued into the current policies of the Kishida government?

MAKISHIMA  Although the name has changed a number of times, from the Special Mission Committee on IT Strategy to the Special Committee on Digital Society Promotion, and then to the Digital Society Promotion Headquarters, I have always been its chief secretary. I also delivered the Digital Nippon proposals each year to the minister in charge of this area of policy, the chief cabinet secretary, and the prime minister. In 2020, in addition to the “digital garden city state concept,” we identified the need for a government organization like the Digital Agency. The proposal was accepted by Suga Yoshihide, then the chief cabinet secretary. Later, when he became prime minister, he helped to launch the agency at record speed.

The 2021 Digital Nippon proposal was entitled “Unlimited.” The was intended to represent people who believe that regional issues can be resolved by the introduction of new technologies, the world-leading solutions possessed by Japan. They believe that our people and technologies know no limits, and that Japan hasn’t shown its full potential yet. In the proposal, we suggested that, because people are not sufficiently accustomed to digital tech, we have to promote regulatory reform in the field. I authored the proposal, when I was chief secretary, together with Kobayashi Fumiaki, who now serves as the vice-minister for digital affairs. Upon its acceptance, the agency was charged with its execution.

Increasing Reliance on the “My Number” System

TAKENAKA  The example of using drones to implement visual inspections that previously had to be conducted in person is very easy to understand. Had such a direction of regulatory reform been discussed prior to the time of the Suga administration?

MAKISHIMA  I believe that some discussions had taken place in the Ministry of Land, Infrastructure, Transport, and Tourism, the Ministry of Economy, Trade, and Industry and other entities that oversee matters in areas like this. It falls to the Digital Extraordinary Administrative Advisory Committee to reframe these issues, giving thought to regulations like those requiring in-person handling or permanent stationing of personnel, without being limited to the policies of each ministry. We’re also driving the creation of a “technology map” to coordinate decisions on what kinds of technologies can be leveraged through regulatory revisions.

TAKENAKA  In what ways will this change the lives of ordinary citizens? Would it be possible, for example, to do the training session for driver’s license renewal online?

MAKISHIMA  Trials are already underway in four prefectures—Hokkaidō, Chiba, Kyoto, and Yamaguchi—giving people with clean driving records the option of taking the training online to renew their licenses. In the future, this will be rolled out nationwide. Incidentally, our policy is also to integrate the driver’s license with Japan’s “My Number” system of individual identification cards. 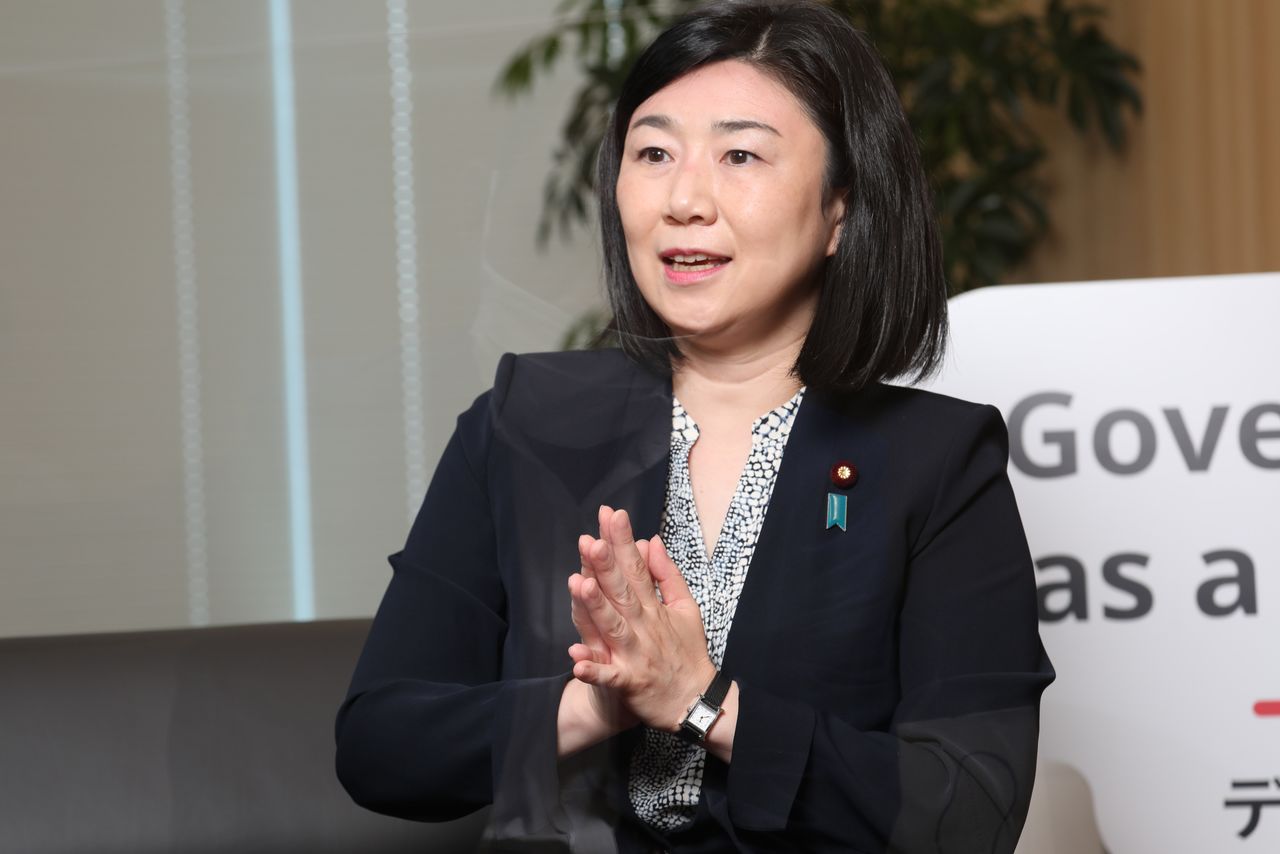 TAKENAKA  You mention driver’s license integration, but the My Number card is also meant to be used as health insurance identification. Does this mean a person’s medical history will be recorded on the card, thereby allowing other medical facilities to refer to treatment records?

MAKISHIMA  At present, people can rely on their My Number cards to share specified health examination results and medicine records with doctors and pharmacists to ensure that they can receive more targeted treatment. But the medical history is not stored in the card, as a security measure in case a card happens to be misplaced.

The key thing about the My Number card is its positioning as the highest means of personal identification. People can often use a health insurance card as a means of ID, but the individual’s photo is not recorded anywhere, so we need to be conscious of its limitations. A My Number card, makes it possible to confirm a person’s identity with certainty, as well as any qualifications, and for the individual to give permission for a doctor to view his or her medical history.

It’s important that we encourage people to become accustomed to using their My Number card as a passport to the digital society. With the My Number card functioning as a health insurance card, people won’t need to carry separate proof of insurance, and indeed there will no longer be a need to issue health insurance cards at all. We’re continuing to pursue this sort of convenience.

TAKENAKA  At the start of the COVID-19 pandemic, the public became painfully aware of the slow pace of digitization in government departments with the confusion over cash payouts designed to alleviate the economic impact of the pandemic. How much progress has been made in registration of citizens’ bank account information?

MAKISHIMA  Just today, on June 30, we launched a second campaign for citizens to receive points that can be used for shopping by registering details to their cards. They can receive 7,500 yen’s worth of points for applying to use their My Number card as a health insurance card, and 7,500 yen in points for registering a bank account to receive government payments in the future. Also, people who have not yet collected points offered in the first campaign, for the initial acquisition of a My Number card, can receive an additional 5,000 yen worth of points, bringing the total potential points that can be gained to a maximum of 20,000 yen’s worth. I believe that this campaign will encourage more people to acquire a card, to use it as health insurance identification, and to register an account for government payments.

TAKENAKA  The Digital Agency’s catch-phrase is to be the “command tower” for the creation of a digital society. What are your thoughts on the agency’s relationship to other government ministries and agencies? Are there times when the agency uses its comprehensive coordination functions to issue specific directions?

MAKISHIMA  The Digital Agency has a variety of roles in addition to its main jobs for the central government and local authorities—the construction of digital infrastructure, revision to existing systems, and providing advice. For example, we’re also responsible for promoting the registration of bank accounts to receive government benefits, and for the My Number system. However, the My Number card itself is the responsibility of the Ministry of Internal Affairs and Communications​, and the Ministry of Health, Labor, and Welfare is in charge of the introduction of My Number card readers at medical institutions. We coordinate with these ministries in this work.

In the future, we also hope to advance the digital society in quasi-public fields. We’ll be promoting digitalization, coordinating data formats and collection, and facilitating its use in a number of areas in the private sector where the government plays a significant role, and that are intimately tied to people’s lives—such as health, medical and nursing care, education, children’s issues, disaster mitigation, and mobility. We’ll be working to provide the best services suited to individuals’ needs, thereby realizing the “digital garden city state” concept.

Regarding our relationship to other ministries and agencies, when we consider the digital society as a whole, in situations where we believe progress in a certain area is obviously slow, we’re given the authority to make recommendations, although it is reserved for extraordinary use. We have not exercised this power to date, but I believe that even the fact that we have this power sends a strong message to other areas of government.