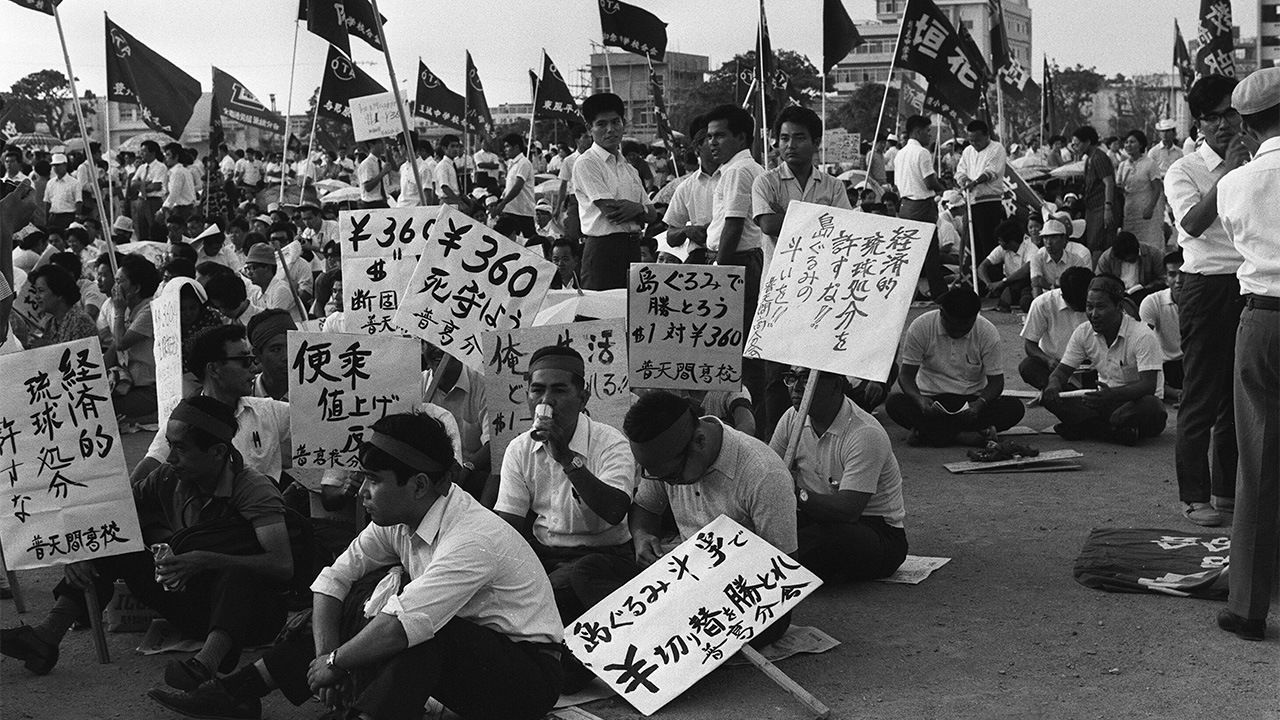 Okinawa’s Continuing Economic Burden: Will Okinawa Ever Realize Equality with the Mainland?

Economy Politics History Society Lifestyle May 20, 2022
On May 15, 1972, Okinawa reverted to Japanese control. Ever since, Okinawa has sought to achieve economic and political treatment and development “on par with the mainland.” Half a century later, though, the islands still endure economic, political, and even health inequalities. Will Okinawa ever realize its long-held aspiration of equal treatment?

How Long Until Hondo Nami?

World War II’s tragic Battle of Okinawa resulted in Okinawans bearing the brunt of ground combat between United States and Japanese forces. Okinawa then endured 27 years of military occupation by the United States. Ever since being administratively reintegrated into Japan as Okinawa Prefecture 50 years ago, in 1972, these far-flung southern islands have aspired to economic and political treatment and development “on par with the mainland,” or hondo nami in Japanese. Half a century later, the island still endures inequalities with the rest of Japan in terms of employment, income, the presence of US military bases, and recently, even the spread of COVID-19. Will the achievement of hondo nami have to wait another half century?

In August 1971, senior officials in the White House were busy formulating a new economic policy that would later be known as the “Nixon Shock.” These officials included Peter Peterson, then executive director of the Council for International Economic Policy. Peterson, a close aide to President Richard Nixon, knew the effect that the planned suspension of the US dollar’s convertibility into gold would have on Japan as Tokyo prepared for Okinawa’s return. In a confidential memo dated August 24, 1971, Peterson wrote: “Revaluation of the yen while Okinawa remains a dollar area would, of course, be unpopular with the Island’s inhabitants and complicate Japanese political relations with their future citizens” (National Archives and Records Administration).

As Japan moved from a fixed to floating exchange rate system in response to the end of the gold exchange standard, the appreciation of the Japanese yen against the US dollar was expected. This would mean American dollars accumulated by Okinawans, then the currency used in the islands, would lose their value against the yen at the same time the prices of imports from the Japanese mainland would increase. Peterson realized this had the potential to become a thorny issue in Tokyo’s reintegration of Okinawa into Japan.

Okinawa’s reversion was not just a political event, but also a process of economic integration. It essentially meant that a very large economy (Japan) with considerably greater spending power would incorporate a small economy like Okinawa. And it was Okinawa that would have to adapt, through the conversion of its currency from a weaker dollar to a stronger yen.

Individual foreign exchange losses were to be compensated by the Japanese government upon reversion to a certain degree in the form of a “currency verification” exercise, but the scale of this sudden economic integration and currency adjustment resulted in significant inflation taking hold in Okinawa.

Using the 1965 prices of Okinawa’s capital, Naha, as the base of 100, July 1971 prices would have been 137.5 immediately prior to the Nixon Shock. By December, the index had quickly risen to 144.8. In June 1972, food and utilities prices had risen 13.6% and 17.8%, respectively, in the one month since reversion. Sengo Okinawa keizai shi (Economic History of Postwar Okinawa), a major work compiled by the Bank of the Ryūkyūs’ research department in 1984, describes the confusion at the time of the reversion to Japan as follows:

Currency conversion, taking place as it did at the same time as a sharp decline in the value of the American dollar, had an immeasurable impact on the Okinawan economy. It caused prices to skyrocket, putting great pressure on the average consumer, and even lead to economic and social unrest in many areas.

The economic adjustments and burdens forced on Okinawans at the time of reversion became emblematic of the relationship between Okinawa and the mainland for the next 50 years.

Bases as a Growth Barrier

Located at the southern reaches of Japan, Okinawa Prefecture consists of a mixture of 160 inhabited and uninhabited islands, and covers an area of 2,200 square kilometers, little more than 0.6% of Japan’s total land area. Okinawa’s population continued to grow after reversion and the prefecture is now home to 1.4 million people.

Because of this, it has long been assumed that Okinawa’s economy is dependent on American bases and the US military. In the early postwar period, this was true. For example, Miyagi Osamu wrote in Dokyumento: “Amerika yū” no Okinawa (Okinawa’s American Era):

In 1955, base income accounted for 66.7% of all foreign receipts, more than exports. In Koza (now the city of Okinawa), where 75% of the city area was requisitioned for the military, there were 500 brothels together with 3,000 souvenir stores, restaurants, and other businesses catering to American soldiers.

As the chaos of the postwar period settled and reconstruction began in earnest, this dynamic began to change. The numbers make it clear that this image of a base dependent economy no longer holds. Data from Okinawa Prefecture shows that base-related income accounted for 30.4% of the prefecture’s income in 1965. When Okinawa returned to Japanese administration in 1972, this percentage had already dropped to 15.5%. It continued to decrease, reaching about 5% in the 1990s, where it remains today.

Professor Maedomari Hiromori of Okinawa International University argues that Okinawa’s economic future is one focused on new uses for former bases. He notes that:

In the past, people pointed to base dependence by looking at the sum of base subsidies, military land fees, and employment created by the US military. However, this does not provide the full picture. The commercial facilities built on the land of military bases returned to Okinawa have become central to attracting people and money from inside and outside of the prefecture.

A prime example is Aeon Mall Okinawa Rycom. The shopping mall opened in 2015 in Kitanakagusuku, a village located at the center of Okinawa’s main island. The land was formerly a golf course for the exclusive use by the US military. The name Rycom comes from an abbreviated name for Ryūkyū Command Office. In fact, Rycom (Raikamu) is used locally to describe the area surrounding the former command post and is even another name for Kitanakagusuku. Aeon Group saw great success as the new shopping center quickly attracted 10 million visitors every year until the onset of the COVID-19 pandemic.

There are other cases. For example, land for US military housing in the northern section of the city of Naha returned in 1987 was developed into the Naha Shintoshin District. Today, this urban center is a landmark in its own right, lined with high-rise condominiums, large-scale commercial facilities, hotels, government offices, and other buildings.

Okinawa Prefecture has calculated the economic impact generated by the return of these properties. Measured in terms of employment, consumption, and materials procurement, the Naha Shintoshin District generated ¥5.2 billion per year for the region when it was a US military housing complex. This figure quickly went up to ¥163.4 billion per year once the urban center was completed. Including security guards, the housing complex only employed 160 local people before reversion. Now 15,000 people work in the Naha Shintoshin District.

The prefecture has also published similar calculations for facilities that the American military plans to return in the future. One such example is the Futenma Air Station. If returned, the expected economic impact could be ¥400 billion per year and employment could reach 30,000 people. Clearly this would be a major economic boon for Okinawa.

As the image of Okinawa as a base-dependent economy becomes a distant memory, OIU’s Maedomari believes Okinawa will enter the “new base economy era” where land from former military facilities will be repurposed for economic activities. However, huge bases—such as Kadena Air Base, which is strategically located in the center of the main island—are not scheduled to be returned. Fifty years since Okinawa’s reversion to Japan, US forces continue to dampen prospects of economic growth.

If you were to ask people familiar with Okinawa what the most important industry for the prefecture is, most would probably answer “tourism.” However, the tourism industry has struggled greatly since 2020 due to the massive blow dealt by the COVID-19 pandemic.

The number of visitors to Okinawa was only 440,000 per year at the time of reversion in 1972. However, visitor numbers grew steadily, passing 5 million in 2003, and then reached the 10 million mark in 2019. Naha’s main street, Kokusai Dōri, overflowed with foreign tourists as more than 3 million people a year came from neighboring countries like China, Taiwan, and South Korea. Since the pandemic, however, visitor numbers have plummeted to only one-third of previous levels, with foreign visitor numbers dropping to almost zero. As the prefecture’s tourism-related income came to ¥734 billion in 2019, the precipitous drop in visitors has dealt a severe blow to the Okinawan economy.

Takeda Tomoo, managing director of Ryūgin Research Institute, believes that “once restrictions on movement are lifted, we will see a little more growth. Tourist activity has shown signs of a slight recovery since the March holiday period and hotel occupancy rates are increasing.” Global efforts at containing COVID-19 are, therefore, an extremely important issue for the future of Okinawa’s economy.

Public works and construction also serve as key pillars for the Okinawan economy. While the manufacturing industry only accounts for four percent of Okinawa’s GDP, the construction industry contributes 13%. Takeda notes that the manufacturing sector has not successfully taken root in Okinawa, and the government has recently placed less emphasis on promoting it. Despite being sensitive to economic downturns, the tourism and construction industries remain the primary drivers of economic activity in Okinawa.

Okinawa’s economy is characterized by other problems. Annual per capita income is only about ¥2.4 million, the lowest among Japan’s 47 prefectures. Unemployment is also approximately 1–2 percentage points higher than the mainland. The number of young people unemployed is particularly high. In 2020, 32.0% of Okinawans aged 29 and under were unemployed, while the national figure stood at 26.7%.

People frequently tout the importance of human resource development for Okinawa, but the problem is actually getting worse. Okinawa’s university enrollment rate is 39%, the lowest in Japan. Young people who do not go to college are forced to work in irregular and low-wage jobs. Even if they do enter university, 80% of them work part-time to make a living. This is an intractable issue that needs concrete measures to address it.

The Problem Remains the Same

Immediately following the Battle of Okinawa, surviving residents were herded into internment facilities colloquially called “camps” (kyanpu). Life was heavily regulated by the American military, with resources rationed, and people did not have currency of their own. Furthermore, development was initially limited due to the “military-first” occupation policy. Prices and wages differed greatly between Okinawa and mainland Japan, which began to enjoy rapid economic and industrial growth. Adjustments were inevitable during the reintegration of Okinawa into Japan in the 1970s, with the inflation that hit Okinawa at the time of reversion a particular problem.

Half a century has passed. American military bases are still scattered throughout Okinawa, hindering regional economic development. With the presence of these bases, one wonders whether the aspiration of hondo nami can really be realized in economic terms.

In the preface to aforementioned Economic History of Postwar Okinawa, one of the authors, Makino Hirotaka, who would later serve as the prefecture’s deputy governor, wrote:

To properly understand the economic policies of postwar Okinawa, it is absolutely essential to understand American and Japanese policies toward governing Okinawa and the intended effects and circumstances of those policies.

Makino’s remarks still ring true half a century after Okinawa’s reversion. As this reality is likely to persist for the foreseeable future, Okinawa’s economic development will continue to be restrained by factors and policies beyond Okinawa’s control.

(Originally published in Japanese. Banner photo: Okinawa residents gather to protest Tokyo’s currency policies and the switch to a floating exchange rate in the “Rally to Protect Okinawan Livelihoods from the Dollar Crisis.” The rally took place in Yogi Park in Naha, Okinawa, on September 1, 1971. © Jiji.)