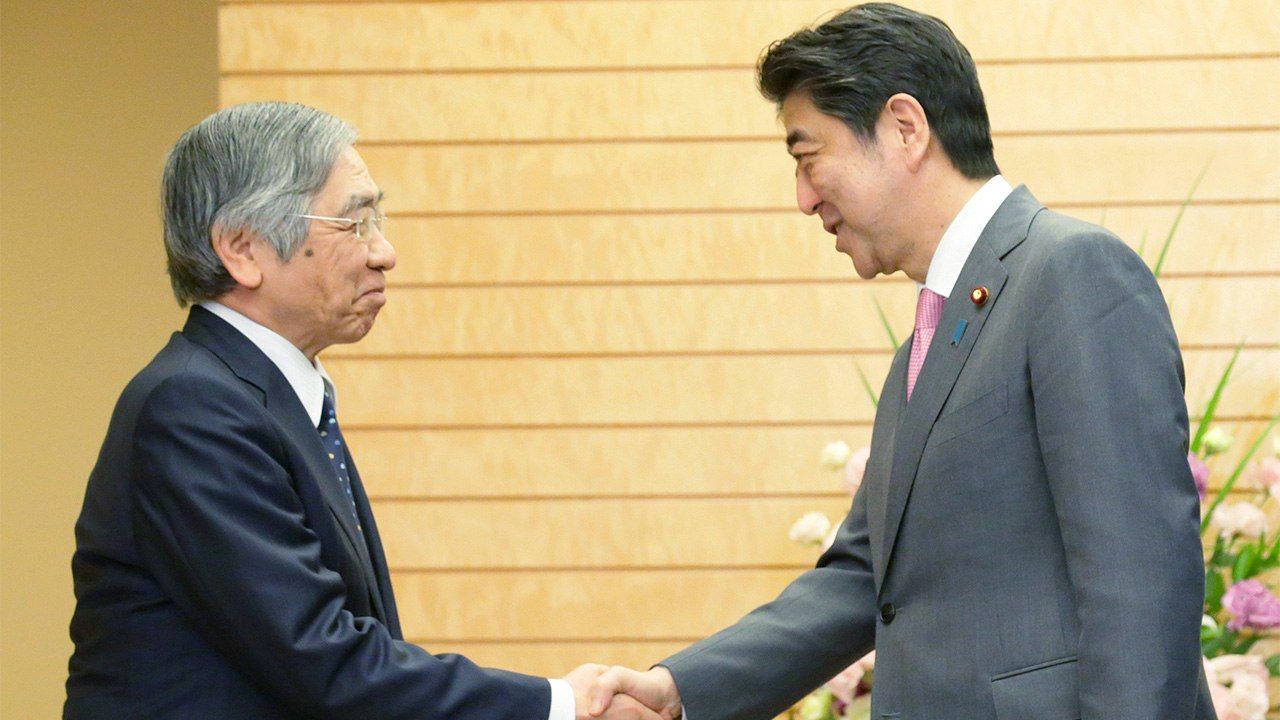 Giving Abenomics a Grade: A Promising Program that Strayed from the Path of Growth

Economy Work Society Health Nov 21, 2022
The “three arrows” of Abenomics brought fresh hope to younger generations who had lived through the wintry years of Japan’s sluggish economy. The author, a leading official at the Cabinet Office during Prime Minister Abe Shinzō’s second administration involved in the formulation of Abenomics, urges a rethinking of what the program did for Japan.

Bold Moves to Turn the Markets Around

The Abenomics economic policy program pursued by Prime Minister Abe Shinzō during his second term in office (2012–20) consisted of three “policy arrows.” The first of these was bold monetary easing. Following the 2008 global financial crisis, governments around the world embarked on programs of deep monetary easing, but Japan alone remained committed to a more conservative stance. As a result, each time the US Federal Reserve Board announced a fresh round of massive quantitative easing, the yen climbed in value against the dollar. By the time it broke through the ¥80 to the dollar barrier, Japan’s export industries had been pushed to the brink.

One reason Japan did not follow suit with monetary easing was that it anticipated such moves would result in poor outcomes. The mainstream thinking among Japanese economists was that a looser money supply would only lead commercial banks awash in funds to sock away massive amounts in current account deposits with the Bank of Japan, producing nothing of economic benefit.

But poor outcomes were the result nonetheless. As the yen continued to strengthen, the nation’s industries were hollowed out and exported at a furious pace. Fearing that this trend, if left unchecked, would plunge the Japanese economy into a dismal future, Prime Minister Abe moved to change the trend through a program of bold quantitative easing. At the end of 2012, as the results of the December 16 general election made it clear that Abe would be forming a new government, currency markets began reversing their trend, heading toward a weaker yen. Once his administration was in place, he moved to place Kuroda Haruhiko, long a proponent of the QE approach, in the Bank of Japan governor’s office, and set about the task of wiping away the deflationary mindset in Japan.

Japan’s stock markets responded favorably to this. The Tokyo Stock Exchange’s Nikkei benchmark, which stood at around 8,600 in November 2012, just before Abe took office, had nearly tripled to 22,800 by August 2020, when he wrapped up his administration. In September 2013, the prime minister made an appearance at the New York Stock Exchange, where he memorably urged listeners to “Buy my Abenomics!” (At around this time I, too, was asked to speak on the topic of Japan’s new economic policy at South Korea’s Ajou University.)

A Needed Hike in the Consumption Tax

The second arrow was a flexible fiscal policy enabling robust government spending to spark growth. It began with a roughly ¥10 trillion supplementary budget aimed at jump-starting the sluggish economy. On the back of this governmental attempt to create fresh demand, Abe pushed ahead with the consumption tax hike decided by the previous administration of Prime Minister Noda Yoshihiko, taking it from a 5% rate to 8% in April 2014. Although this was based on the view that the economy had stabilized, and that sufficient steps had been taken to lay the groundwork for the hike, it was nonetheless followed by a period of stagnant growth. Public sentiment is key to the economy, and in Japan, the broadly held belief is that any rise in the consumption tax rate will deal a blow to the country’s economic condition. In this sense, it was unavoidable that the rate hike would result in this backsliding.

However, Abe’s growth policies included numerous measures aimed at securing the significant resources required to fund vital systems for Japan going forward, such as a social security system meeting the needs of future generations. Taking on debt to fund these things would only present today’s children with serious burdens tomorrow; the alternative to this, which Abe was not afraid to push through, was the consumption-tax hike.

The third arrow of Abenomics was a growth strategy intended to spark private-sector investment. According to this part of the plan, deregulation and other steps would create a society where individuals and companies could make full use of their capabilities. The details spelled out an economy where workers would see wages rise and the corporations would plow their profits productively into a growth cycle, along with a regulatory landscape making Japan one of the easiest places in the world for global companies to do business.

In connection with the first point, Abe’s government brought together Rengō (the Japanese Trade Union Confederation) and Keidanren (the Japanese Business Federation), pushing forcefully for agreements on higher wages. The idea was that higher pay would boost Japanese workers’ purchasing power, thus generating a self-perpetuating cycle of higher corporate profits and further wage hikes. Domestic productivity rises failed to materialize, though, and as wages stagnated, this positive cycle did not come into being. Without higher productivity, there can be no higher wages.

On the second point, making Japan more business-friendly, some steps were taken, including a reduction in the corporate tax rate. This did attract some additional inbound investment, to the tune of ¥11.5 trillion, but this came alongside a far greater rise of ¥90.5 trillion in Japanese investment overseas. Having globalized their operations during the previous era of the catastrophically overvalued yen, Japan’s companies now showed little compunction about directing their funds abroad if it appeared this would return more on their investment than domestic targets.

Changing these conditions would require nothing less than reinvigorating the domestic economy and enhancing corporate productivity on the home front. This was a particular urgent task for small and medium enterprises, a sector that saw some 70% of all firms in the red and therefore paying no corporate tax at all. Prime Minister Abe was thus inspired to bring out a set of three new arrows, namely building a strong economy offering hope, providing support for families allowing them to pursue their dreams, and enhancing social security systems to give people peace of mind. The reform of working styles and work/life balance was added to these.

Before these policies were able to make an impact, though, COVID-19 arrived. The government resolutely implemented fiscal measures to lessen the impact of the pandemic on the economy, but Abe’s growth strategy gradually changed in nature. This strategy had originally been put together mainly by the Ministry of Economy, Trade, and Industry, and as vice-minister at the Cabinet Office, I sat in on explanatory meetings on the plan with Prime Minister Abe. The menu presented to us, though, included nothing along the lines of vigorous spending to boost the economy. We had seen a fundamental shift in how the growth strategy was put together.

In the end, then, how should we grade the Abenomics program? I believe it deserves high marks as an effort to put an end to the “lost decades”—the 30 years of aimless economic development in Japan. This positive assessment is evident also in the support that Abe’s government enjoyed among younger people. It may go too far to talk about the 2009–12 rule by the Democratic Party of Japan as a “nightmare” for the country, but it is clear that the younger generations who suffered through the “employment ice age” viewed Abenomics as something bringing them fresh hope.

The effective ratio of job vacancies to applicants is now at a 45-year high, at around 1.5 jobs available for every job seeker. Even highly sought-after full-time “regular employment” positions have a rate above 1, for the first time since data began being collected. The successes in this area are clear.

At the same time, though, the Abenomics growth strategy has not produced the hoped-for results in other areas. GDP growth has not been reinvigorated, and today per capita income in Japan is in danger of being outstripped by the figures in South Korea and Taiwan. I believe this is because the government shifted course away from sustainable economic growth and toward robust, shorter-term fiscal stimulus before the growth strategy had time to gain momentum. Keynesian fiscal and monetary policies may give a fillip to economic activities in the short term, but they will never produce lasting GDP growth. This is something that John Maynard Keynes himself stated in no uncertain terms.

What, then, sparks economic growth? To this, too, Keynes had an answer: animal spirits. The policies needed to draw forth these spirits were the very ones that Prime Minister Abe had proposed during his first term in office, in 2006–7: making full use of the capabilities of women, empowering young people to take on new challenges. During his second term, these were joined by his concept of a society where “all Japanese people could play their part.” All of these policies, though, are the sort that require a considerable amount of time to bear fruit.

And so, with no easy results seen as likely on the sustainable growth front, and facing periodic elections interrupting longer-term plans, the government turned its hand instead to massive fiscal outlays as a means of rapidly injecting vigor into Japan’s economic activities. Not a single Japanese economist raised the alarm about this, though, despite the fact that such measures cannot produce lasting growth in the economy—a sign that this was likely the only politically possible move to make at the time. The outcome of these generous fiscal injections into the economy, though, was a ballooning load of public debt.

In sum, Abenomics has both its light and dark sides. In the balance, though, it is my view that the light side far outstrips the dark. Prime Minister Abe may be most remembered for his efforts on the diplomatic and security fronts above all else, but without a robust economy, no nation can have the strength to defend itself.

The task before us today is clear. We must return to the basics of Keynesian economics and swiftly create the structures that will call forth the animal spirits of the Japanese people. This is the key to creating a powerful economy and a bright future for the nation’s children—to realizing the “beautiful country” that Abe Shinzō pledged to achieve.

(Originally written in Japanese. Banner photo: The reappointed governor of the Bank of Japan, Kuroda Haruhiko, at left, and Prime Minister Abe Shinzō shake hands at the Kantei on April 9, 2018. © Jiji.)