Forests account for some 70% of Japan’s land area. Intimately tied with the nation’s development, woodlands since ancient times have provided residents with timber for building, raw materials for crafting tools and everyday utensils, and fuel for cooking and heating. Forests have also had a vital role in agriculture, with farmers plowing leaves and brush into fields as fertilizer. However, dependence has frequently resulted in overexploitation, and governments throughout Japanese history have struggled to balance demand for timber with the need to conserve forest resources.

Starting in the 1960s, though, the Japanese people developed an increasingly distant relationship with their nation’s woodlands as the economy grew and society evolved. The proliferation of chemical fertilizers offered farmers a less labor-intensive means for nourishing their crops, and increased oil imports reduced reliance on timber and charcoal as a thermal energy source. Inexpensive wood from overseas gradually replaced domestic sources of timber for construction and woodchips used in paper production. As Japan’s economy developed and trade boomed, the country became estranged from its once vital forest land. In 1955 Japan supplied 96% of its own timber needs. However, by 1970 this had fallen to 50%, and the figure continued to decline until hitting an all-time low of 18.8% in 2002. 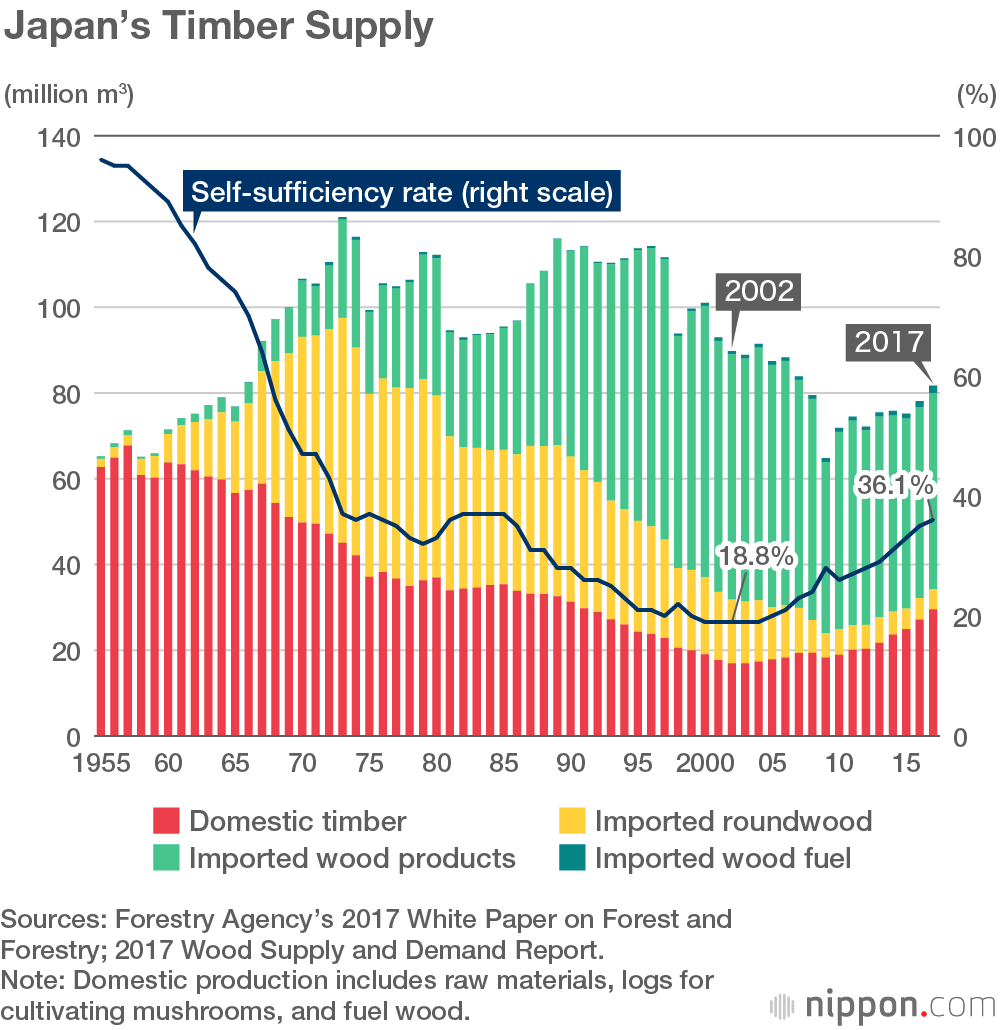 Large portions of Japan’s woodlands—around 40%—are artificially planted. The health of such stands, most of which were started after 1950 to supply timber to the construction industry, must be maintained, by methods like thinning trees and removing the undergrowth that flourishes during Japan’s warm, wet summers. As reliance on domestic timber has fallen, though, forest management has waned, and experts now sound the alarm about environmental impacts, including reduced biodiversity and increased soil erosion due to dense tree growth preventing sunlight from reaching the forest floor. The sustainability of forest resources is no longer an issue of overuse but has shifted to one of underutilization.

Adding to the problem is the fact that young people today do not view forestry as an appealing career—like other manual-labor jobs, it suffers an unpalatable image of being dangerous, dirty, and demanding. Youths in forestry-dependent communities have over the decades left in droves seeking office jobs in urban areas, resulting in the steady graying of the workforce as the population declines. With no one to pass their land to, many aging forest owners have had little recourse but to abandon woodlands, creating a nationwide crisis of growing tracts of unsurveyed and unregistered property.

Although the situation is dire, two trends have emerged in recent years that give many in the forestry industry hope for the future. First, large-scale lumber mills and Japan’s burgeoning number of biomass power plants have boosted demand for domestic timber. Rising prices of imported roundwood and a weaker yen have helped drive this trend, which also comes at a time when stands planted in the early postwar period are ready for harvest. Until 2014 government assistance for lumber producers mainly focused on thinning stands, but in the last few years authorities have promoted measures like the use of cutting-edge machinery and adoption of more efficient distribution systems to help the timber industry meet the increasing need for domestic trees. As a result, Japan’s self-sufficiency rate of wood had rebounded to 36% as of 2017.

The second promising trend is a growing influx of Japanese in their twenties and thirties from cities into rural areas. The phenomenon first garnered attention around 2000 but has gained momentum since the 2011 Great East Japan Earthquake after repercussions of the disaster, like rolling blackouts and empty store shelves, disabused many young people of the security they felt in urban life. I have followed this trend with interest and talked with people around the country to learn their motives for leaving city life behind and taking jobs in a physically demanding profession like forestry.

For a More Flexible Career

I have found that these transplants typically combine a career in the woods with work in one or more other fields. I have encountered an astounding range of secondary occupations, including farmer, outdoor sports instructor, restaurateur, photographer, flower artist, carpenter, publisher, and IT specialist, just to name a few.

I spoke with one woman in her thirties who divides her time between forestry and work as a canoe instructor. Neither occupation alone offers a steady income—canoe classes are mainly a summer endeavor and forestry can be winter work—but by pairing the two jobs she is able to make both ends meet. Although she does not consider cutting trees to be particularly lucrative, it has the advantage of being flexible—lumber can be harvested year-round—and provides an ideal match to offset seasonal and typhoon-related dips in canoe lesson enrollment. Another factor for going into forestry was the ease of entry—getting started was as simple as collecting firewood, requiring just a chainsaw and a light truck.

Along with the chance to earn a steady income, many individuals take up forestry in search of a sense of mission not found in city jobs. I have interviewed people who avidly describe such things as the beauty of sunlight shining through a newly thinned forest, the emotion of carrying on the work of their predecessors, and feelings of earnest duty to protect the surrounding streams and rivers. In addition, forestry is a diverse field offering ample opportunities to learn highly specialized skills; a motivated individual could start by cutting firewood and after several years of training work up to producing high-quality building materials that command a premium price.

Many of Japan’s managed woodlands are privately owned and have been tended for generations of the same family. However, as the country ages and population declines, landowners are increasingly being left without heirs willing to carry on the business. In the last few years, though, a possible solution has emerged: growing numbers of young people relocating from urban areas who, while not landowners themselves, work as self-employed logging contractors. In response to these young newcomers, an NPO was established in 2014 to study and promote small-scale, self-employed timber harvesting (jibatsu) techniques.

The merits of small-scale harvesting by individual contractors are many, including better managed forests and opportunities to educate and train younger loggers in forestry techniques. The practice also relies mainly on small-sized equipment like chainsaws and light trucks and requires only narrow access roads to harvest areas—these need less effort to cut than wider tracks and are less prone to collapse— reducing the start-up costs and environmental impact of logging. Other factors working in its favor are much-needed thinning of large tracts of untended forest land—done in increments—promoting long-term forest management practices that more than double the typical 40-to-50-year harvesting age of stands, and flexibility in choosing whether to do small-scale clearcutting or selective logging.

Considering the state of Japan’s woodlands, the small-scale approach is less damaging to the environment than large industrial clearing operations. It reduces residual damage to land and loss of topsoil due to surface runoff as well as conserving a healthy ecosystem for forest flora and fauna, resulting in better overall forest management.

The success of the small-scale, self-employed harvesting model hinges on building trust to the level where landowners can in good faith place the management of their forest land in the hands of young contractors.

Their relationships can take a number of forms, ranging from set contracts where owners pay contractors a flat fee to thin a stand to cordial agreements where no money changes hands. An example of the latter might be an elderly landowner turning over his timber operation in return for a contractor promising to construct a simple access road for collecting seasonal wild vegetables or firewood. Recently, some local governments have started programs aimed specifically at strengthening ties between forest landowners and new arrivals, often as part of broader policies addressing depopulation in rural communities.

In the same vein, the national government has several new initiatives underway to ensure a steady supply of domestic timber and promote long-term growth in the forestry industry. Under a 2018 forestry management control law, owners who cannot tend their land adequately can have their rights to management commissioned to a third party who is willing and able to manage the forest, in particular harvesting and replanting trees.

In the last few years natural calamities like heavy rains and earthquakes have occurred with greater frequency, pressing the country to forge a new strategy for managing its woodlands. At such a crucial junction, the way forward is not a dogged reliance on the large industrial operations of the past. We now need the active promotion of small-scale harvesting by individual contractors.

(Originally published in Japanese. Banner photo: Contractors participate in a logging training camp in Kamogawa, Chiba Prefecture, in 2015. Photo courtesy of the author.)