Can Dogs Be Reborn in Paradise? Japan’s Buddhist Funerals for Pets

Society Culture Feb 5, 2019
Growing numbers of pet owners are demanding full-fledged funerals for their late beloved animal companions, leading to heated debate among Buddhist scholars about what happens to pets after they die. We look at the surprising history of funeral ceremonies and Buddhist prayers for animals in Japan.

Can pets be reborn in the Pure Land after death?

This question has prompted furious debate in my sect of Buddhism. Adachi Toshihide, a member of a Buddhist research institute at Kyoto temple Chion-in, broached the subject at an academic seminar attended by scholars of the Jōdo sect of Pure Land Buddhism held at Bukkyō University in Kyoto, in September 2016. “Hōnen [founder of Jōdo sect of Buddhism],” stated Adachi, “believed it impossible for animals to experience rebirth in the Pure Land, without being reborn in another form first.”

Let me try to explain what is at stake in simple terms.

Pure Land Buddhism believes that by reciting the name of the Amida Buddha (Namu Amida Butsu, roughly “I take refuge in Amida,”) a person can be reborn in the Pure Land after death. Of course, pets cannot chant sutras. In conventional Buddhist thought, pets and other animals inhabit the realm of beasts, a world of suffering that is third from the bottom of the six realms in Buddhist teaching, two ranks down from the human realm. For a dog or cat to be reborn in the Pure Land, it would first have to accumulate good karma in the realm of animals and be reborn as a human. Then, by reciting the nembutsu as humans, it would be possible for it to be born in the Pure Land.

But Hayashida Kōjun of Taisho University, argued that this interpretation was mistaken. “Hōnen also taught that animals can achieve rebirth in the Pure Land through transfer of merit,” he said. Even in the case of a sentient being in the realm of animals, he argued, if a living person transferred merit accumulated through reading the sutras to another being, then it was possible for the animal to be reborn in the Pure Land.

One justification for this view is that it would surely be wrong to argue that rebirth in the Pure Land is also closed to people who are unable to recite the name of Amida for whatever reason, like stillborn babies and some handicapped individuals. This led to the idea of transfer of merit, or ekō as it is known in Japanese. Common examples include the practice of chanting sutras and carrying out other Buddhist ceremonies during the first seven days after a person’s death, and during the 49 days after death. Based on this thinking, even a pet could be reborn in the Pure Land if the animal’s owner performs ekō and transfers merit to the soul of the dead animal.

Pure Land Buddhism continues to debate the issue, and numerous symposia and study meetings have been held to discuss the controversy.

The Growing Demand for Pet Burials

Buddhism arrived in Japan some 1,500 years ago, and the subject of what happens to pets after death was not a subject of burning importance to Buddhist theologians of previous centuries. In recent years, however, the question has started to rattle orthodox Buddhist teachings. There are a number of reasons for this surprisingly fierce debate.

One factor is Japan’s changing social environment. Compared to the past, people today are more attached to their pets. Until around thirty years ago animals were normally kept outside in gardens or yards, particularly in the case of dogs. But over the past few decades it has become increasingly common for people to live in apartments. In addition, preferences have shifted toward smaller breeds, so that now many people assume that their pet will live inside the home with the rest of the family.

According to Japan Pet Food Association’s annual survey on cat and dog ownership, from 2004 to 2017 the percentage of owners in households consisting of two or more people who keep their pet inside increased from 60.1% to 84.4% for dog owners and 72% to 86% for cat owners. If owners who allow their pet inside for part of the time were also included, then the figures grew to 89.1% for dogs and 96.9% for cats.

Pets today are regarded by many as full-fledged members of the family, enjoying an equal—and in certain cases higher—status as human members of a household. Naturally, more owners now feel impelled to carry out proper rites of mourning when their beloved pet has moved on to pastures new.

So, how are Buddhist priests responding to these requests? To be honest, not very well.

Buddhist temples in big cities are increasingly receiving requests from bereaved owners wanting to perform Buddhist memorial services of mourning for their pets. “Your reverence,” they say, “our little Fido passed away recently. Is it possible to have the ashes buried in the family plot? I hope we’ll meet again in a better place one day . . .”

A lot of priests apparently refuse the request outright. The idea of a human and a pet being reunited after death, they say, makes no sense according to Buddhist precepts. Cremating an animal and placing its ashes in a temple graveyard alongside human remains, they add, will cause distress and unpleasantness for other families. Disappointed and demoralized by this rebuff, some people decide to sever ties with their family temple.

Not all temples have taken such a strict view, though. Some of the more adaptable ones even prepare special graves where people can be buried alongside their dead pets. Kannōji in Setagaya, Tokyo, accepts local strays and cats from animal shelters, earning it the affectionate moniker of “cat temple.” Head priest Narita Junkyō started to provide memorial funeral prayer services for animals on a regular basis around 13 years ago. He also responded to requests from people who said they wanted to be buried together with the ashes of their beloved pet. This prompted the temple to start sales of special burial plots known as “plus pet” graves.

Buddhist temples and public cemeteries generally do not permit animal and human remains to be buried together. As I mentioned above, traditional Buddhist teachings resist the idea that beings from the human and animal realms can coexist after death. There are also health concerns about anything other than human ashes being buried in a cemetery plot.

The pet plus graves are specially designed with a separate space for pet remains within the same plot. Narita believes this allows the temple to respond to the wishes of pet owners without offending the sensibilities of other families whose relatives are buried in the cemetery. Today, the temple conducts 46% of its funerals and memorial ceremonies for pets compared to 5% for people. There is even a special crematorium in the temple grounds for pets.

These efforts by Kannōji to respond to the needs of parishioners may seem quite progressive. But in fact, I have come across numerous sources showing that the practice of performing Buddhist prayers for deceased animals has a history stretching back many centuries. 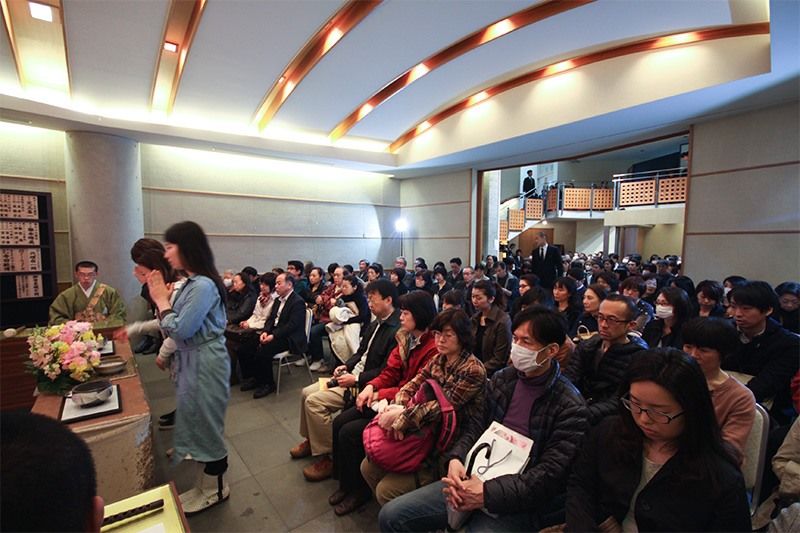 Japan’s oldest pet grave is a burial mound in Kishiwada, Osaka, that marks the final resting place of a famously faithful dog that is said to have lived in the sixth century.

According to tradition, among the retainers of Mononobe no Moriya, who fought against the Soga to oppose the introduction of Buddhism to Japan, was a man named Toritoribe no Yorozu. When Moriya was killed in battle, Yorozu took his own life. His faithful dog Shiro rescued Yorozu’s head from the scene and buried it. Shiro then kept constant guard over his master’s grave until dying of starvation. The court, moved by the fidelity and devotion of the dog, allowed a grave to be built for Shiro. Today, gravestones to Yorozu and Shiro stand on top of the mound, and every autumn members of the Tsukamoto family, who believe themselves to be the descendants of Yorozu, gather to mark the deaths of the two heroes. It is remarkable that these Buddhist memorial services have continued without interruption for nearly 1,500 years.

Another famously faithful pet is Hachikō, whose story is probably familiar to just about everyone in Japan. As the tale goes, Hachikō belonged to a man called Ueno Eizaburō, a professor in the agriculture department at the University of Tokyo. Each day as Ueno set out for work, Hachikō would accompany him to Shibuya Station and diligently wait there for his return in the evening. This went on for about a year, but Ueno died suddenly while at the university. However, Hachikō for the rest of his life continued to wait every day at Shibuya Station for his master.

Hachikō eventually died in 1935, ten years after Ueno’s death. Already famous, his passing was a major event. Hachikō was brought to Shibuya Station, where a full-fledged Buddhist funeral was held, with prayers said by 16 priests called in from the local Buddhist association. 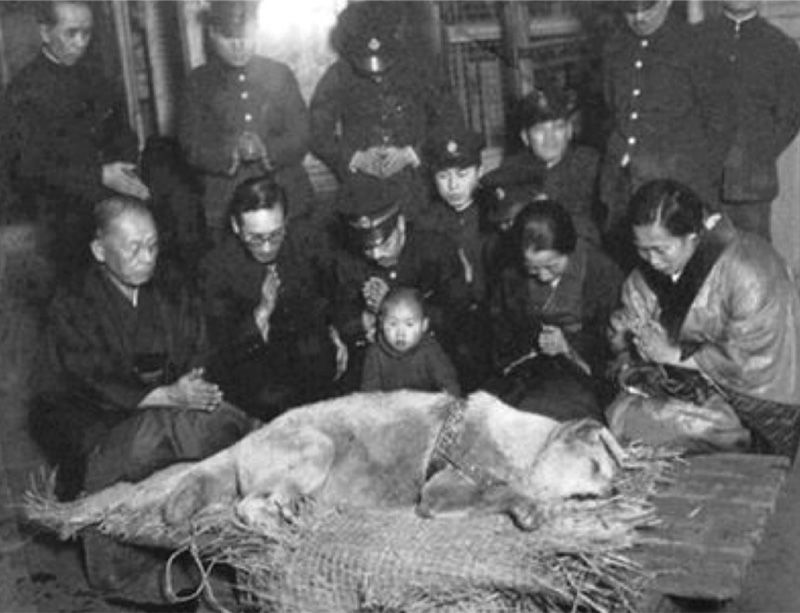 Members of the Ueno family hold their hands in prayer before the body of Hachikō at Shibuya Station in March 1935.

Hachikō was stuffed and put on display, but because of the deep ties of affection between the dog and Ueno, it was felt appropriate to make a proper grave for the faithful canine. Hachikō’s grave is in the Ueno family plot inside Tokyo’s Aoyama Cemetery, where a small stone doghouse-like structure stands next to the professor’s grave. Even more than 80 years later, the site continues to attract a steady stream of visitors. 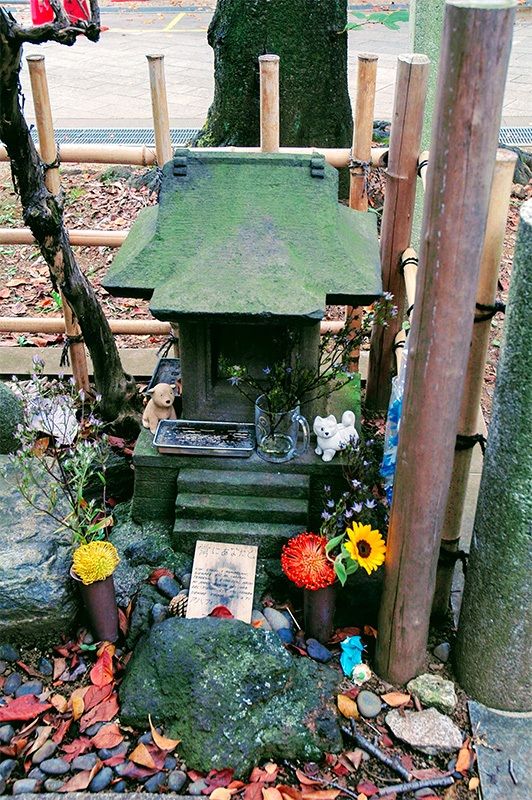 Hachikō’s grave inside the Ueno family plot in Aoyama Cemetery

These examples show that pet graves have quite a long history in Japan. Personally, I think the idea of mourning for animals likely goes back as far as the prehistoric Jōmon period. The ancient Japanese are known to have used hunting dogs and are thought to have had a keen sense of the connections between living things and harmonious coexistence with nature. Surely these early ancestors would have mourned deeply for the loss of any creature to which they were tied by a special connection of this kind.

To feel attachment to a beloved pet and to pray for its rebirth in the Pure Land or to wish to be buried together are only natural wishes for many Japanese. Can Buddhism really preach the spirit of compassion for all living things while turning its back on these desires? Perhaps the death of a beloved pet can teach us the true meaning of mourning.

(Banner photo: Every April, a memorial is held in front of the Hachikō statue at Shibuya Station for the faithful dog. © Jiji. All other photos courtesy of the author.)