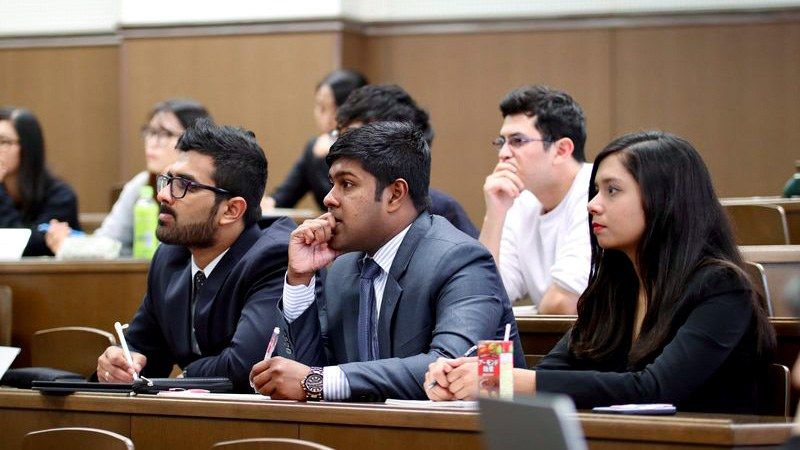 Education Society Feb 27, 2019
Ritsumeikan Asia Pacific University, founded in 2000, has emerged as a Japanese mecca for international students, who comprise about half of its student body. An APU officer discusses the keys to the school’s success and the sweeping changes Japan must make to attract and retain foreign talent.

Universities around the world are competing fiercely for a share of the growing international student market, which is fast approaching 5 million students, according to the Organization for Economic Cooperation and Development. In East Asia, Singapore has made it a national goal to attract outstanding foreign students, and schools like the National University of Singapore—which partnered with Yale University to open Yale-NUS College in 2013—have climbed rapidly in the rankings of destinations for overseas study.

At Ritsumeikan Asia Pacific University, we are watching such trends closely as we compete for some of the world’s best and brightest scholars. Since its launch in April 2000, APU has succeeded admirably at this: As of November 2018, of the school’s 5,829 students, 2,952, or 50.6% of the total, hailed from overseas. Our international students come from 90 countries and regions worldwide, and fully 96.8% of them are full-fledged students on the degree track. The ANU program is also globally unusual for having more than 90% of its international students in undergraduate studies, rather than graduate school. 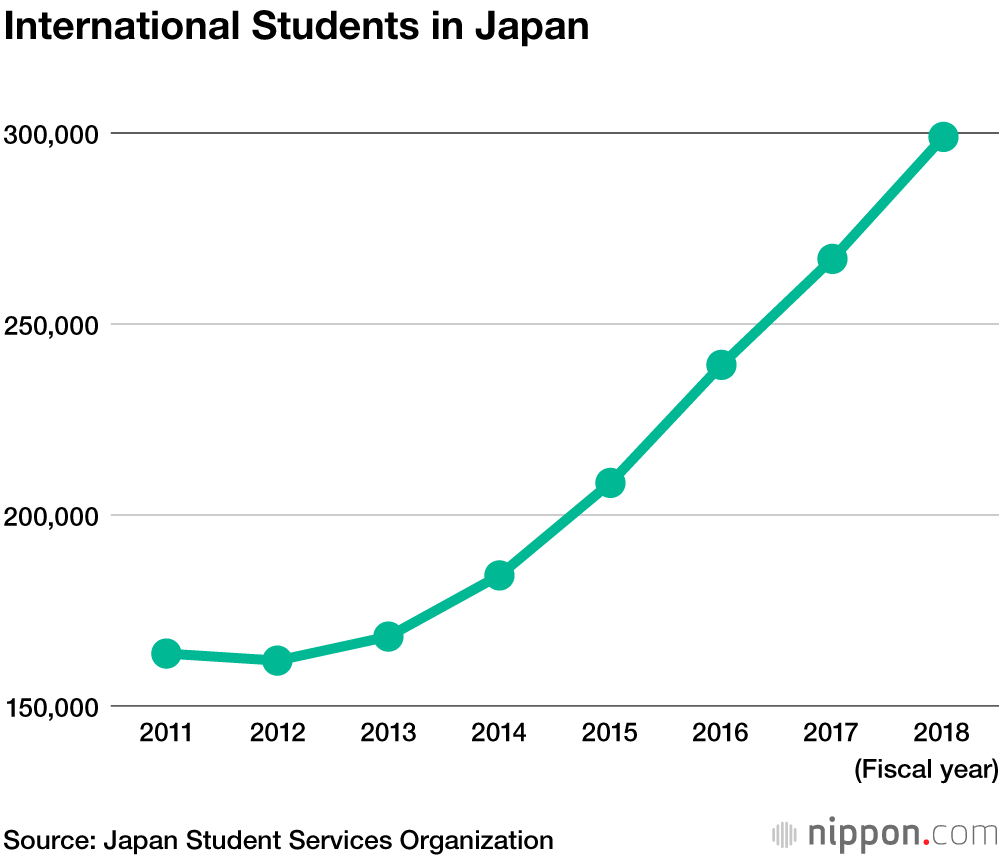 As the accompanying graph indicates, the total number of international students has climbed sharply since 2011. Yet most of this growth has been driven by booming enrollment at Japanese language schools, which is up 274%, and professional training colleges, up 168%. By contrast, the number of international students in undergraduate four-year programs and junior colleges has increased by only 23%, while graduate-school enrollment is up just 26%.

Meanwhile, more than 20% of the 1.28 million foreigners working in Japan as of October 2017 were legally classified as students, according to figures from the Ministry of Health, Labor, and Welfare. This startling statistic reflects the government’s deplorably short-sighted policy of using Japanese language schools as a back door for unskilled foreign labor. Foreign students should be admitted to the country for purposes of study, not to plug Japan’s labor shortages. Where international students are concerned, there needs to be less emphasis on quantity and more on quality.

One reason Japan has been unable to attract more university students from abroad is that its admissions system runs differently compared to the rest of the world. Most universities here only accept students for matriculation in April, at the beginning of the Japanese academic year, and demand a high level of Japanese proficiency from their applicants. Moreover, each institution has its own application process and requirements. Foreign students with a special interest in Japan may be motivated to overcome such hurdles, but the rest are unlikely to give Japanese universities a second glance as they compare their study-abroad options worldwide.

At APU, we have been working hard to internationalize our admissions system with a view to attracting outstanding students from abroad. We admit students twice a year, in the spring and fall. We have no Japanese-language prerequisite, and our application requirements are aligned with those of Western universities, thus streamlining the application process for international students. The English proficiency level of our applicants from Vietnam, Indonesia, and other Asian countries is impressive; last year their scores averaged in the 85–99 range on TOEFL and 6.5–7 on IELTS. We tend to attract well-rounded students whose grade averages and standardized test scores are also quite high. Not a few of our foreign students also had the option to attend top domestic and Western institutions.

The competition for such students is heating up among universities worldwide. Yet few Japanese institutions seem to be taking the challenge seriously. One almost senses that they are too preoccupied with plans to merge or consolidate in a bid to survive the decline in domestic enrollment. But the time has come for Japanese administrators to realize that for no matter how they stack up against counterparts overseas, their schools need to be prepared to compete on the field of global university rankings if they are to be considered by top-caliber foreign students interested in studying abroad.

At APU, we realized early on that we needed to convince the world of the value of an APU degree if we wanted to become a university of choice for international students. This is why we spent eight years earning accreditation from the Association to Advance Collegiate Schools of Business. That protracted process drove home to each and every faculty member the importance of building global standards into our curriculum, instruction, and governance.

Japan as a Gateway to Career Success

Why do students who have been accepted into some of the world’s top-ranking universities choose APU? The quality of our programs and degrees is, of course, a key consideration. But another important factor is the international career prospects of APU graduates. An applicant that I interviewed in Indonesia told me that four of his relatives were graduates of APU. Three had found work at prestigious global companies—a major Japanese bank, a top Japanese manufacturer, and a financial institution in Singapore—and one was pursuing graduate studies at a British university.

In many of the more popular destination countries, the requirements for obtaining a working visa can be quite stringent, and foreign students typically need at least a master’s degree to land a management-track position at a major corporation. In Japan, switching from a student visa to a working visa is relatively easy for university graduates, and foreigners with undergraduate degrees are in high demand. Close to 300 Japanese companies send recruiters to APU each year, and their interest in our international students is palpable.

The distinction of having graduated from a Japanese university and worked at a Japanese company—immersed in Japan’s unique corporate culture—can be a major plus for those subsequently seeking admission to a prestigious MBA or other postgraduate program. Moreover, at a time when big Japanese corporations have a presence in almost every corner of the world, fluency in Japanese language and culture is a valuable business tool that can significantly enhance one’s employability outside of Japan. Especially when career advantages are factored in, Japan truly is a land of opportunity for international students.

That said, much remains to be done to make Japan a more attractive destination for international university students and graduates. One of the biggest problems to be addressed is the lack of flexibility and diversity in the typical Japanese workplace.

From a language standpoint, there is a strong tendency among Japanese employers to equate the academic caliber of international students with their Japanese language proficiency. This emphasis is misguided, inasmuch as English is the standard vehicle of communication for those who would move freely and function effectively in our borderless economy. Japanese proficiency can be a bonus, but it is just one of many options for enhancing one’s marketability.

In addition to language barriers, there are a host of cultural norms, unspoken rules, and tacit understandings that can hinder full and meaningful participation by foreign employees. Many Japanese companies remain wedded to outdated personnel practices, including the mass hiring of new college graduates in the spring, hiring criteria that place low priority on academic achievement, and placement and promotion predicated on lifetime employment. These practices may have made sense years ago, in the age of mass-production and mass-consumption, but they are out of step with global trends and incompatible with the effective utilization of foreign talent. Still, Japanese businesses cling to an outdated corporate culture and often expect their foreign employees to assimilate to the point of suppressing their own cultural identity. Our companies must begin looking outward and developing the kind of organization that respects and profits from internal diversity. 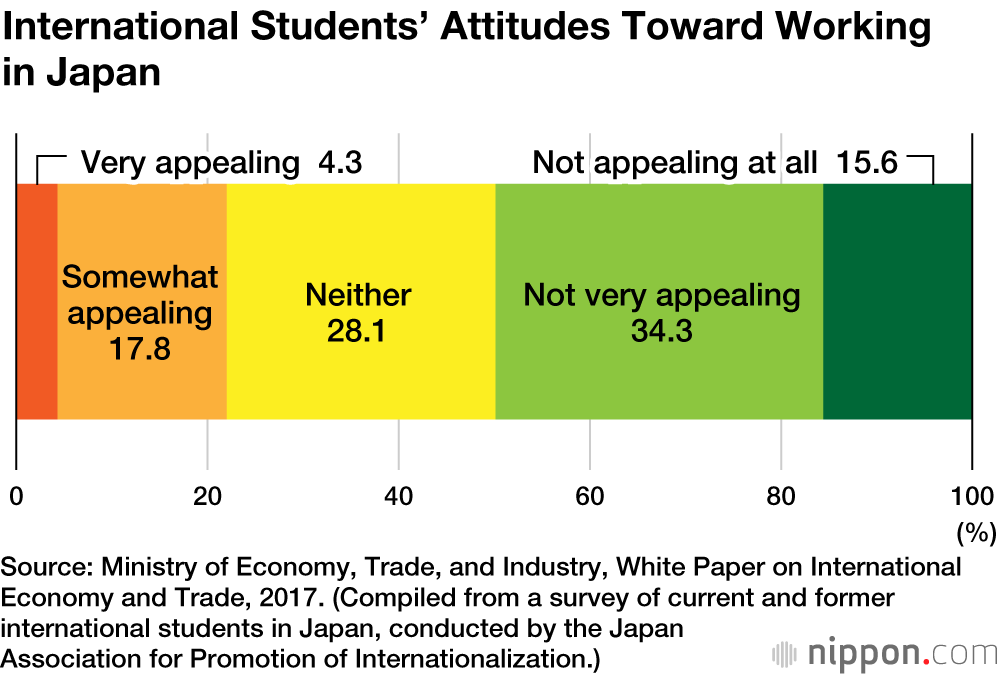 The bottom line is that few Japanese corporations provide an ideal working environment for foreign employers. This may help explain why, in the 2017 World Talent Ranking published by the Swiss business school IMD, Japan ranked a dismal 51 out of 63 countries (and came in lowest of all Asian countries surveyed) in the attractiveness of its business environment to highly skilled foreign personnel. Another reason may be the stodginess of Japanese corporations—their excessive caution regarding overseas markets and slow response to new trends. This is a common complaint among APU graduates, whose job duties are often tied to overseas market development and expansion.

Nonetheless, quite a few foreign graduates of Japanese universities do choose to remain in Japan. After living here a few years, students who came with the intention of returning home with their newly acquired skills and knowledge often decide to stay. Many APU students find employment in Tokyo after graduation, and a growing number marry and settle permanently in the area. This is not solely an economic decision, as quite a few countries offer higher remuneration on average. Rather, it seems to be a quality-of-life issue. Japan’s urban centers are clean and safe, with advanced physical and social infrastructure and a relatively low cost of living. Our graduates also speak highly of the decorum, courtesy, and mutual trust that characterize interpersonal relations. They may continue to feel a bit like outsiders and chafe at certain social systems, but I have rarely heard complaints about the quality of social services or the environment for raising children. And many of them are grateful to have been hired by organizations giving them meaningful duties on the front lines of business right away. 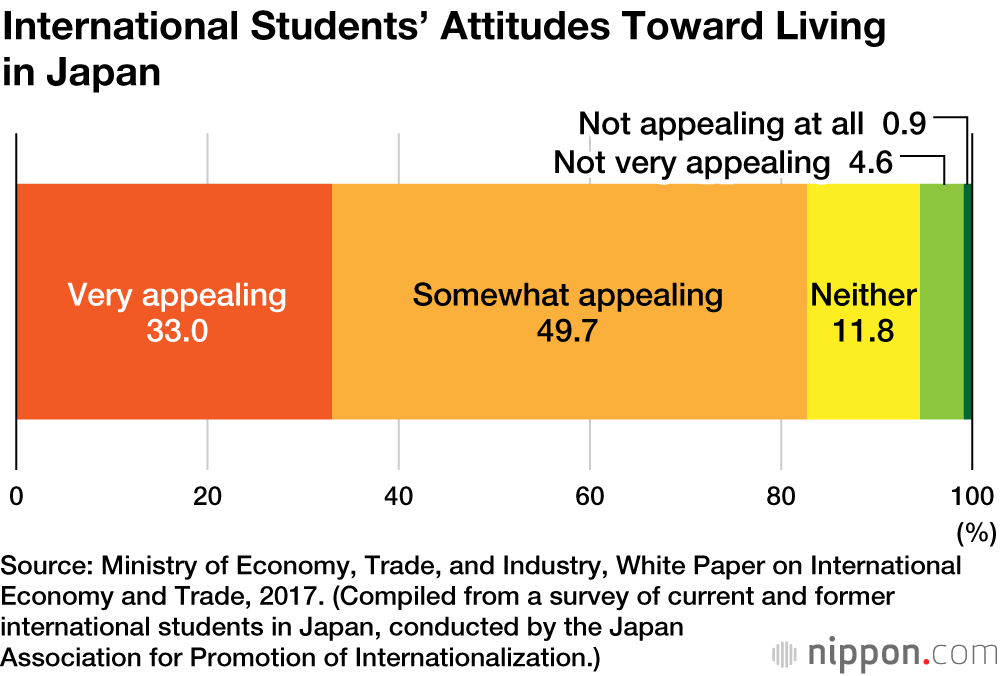 From Japan’s perspective, it is natural to want international students to stay on after graduation, given the nation’s dwindling youth population and growing labor shortages. Certainly it makes sense for industry, government, and academia to work together to create an attractive environment for working and living as well as studying. But let us keep in mind that, for that special breed of person who unfolds a map of the world when considering where to attend university, the future abounds with possibilities. As I see it, the mission of an educational institution like ours is to prepare students to build the most rewarding career possible in the best location possible. Of course, we are delighted if they choose to remain in Japan. But it also seems to me that, in this age of globalization, offering top-caliber students learning experiences that they can use to build bridges around the world is one of the best investments Japan can make.