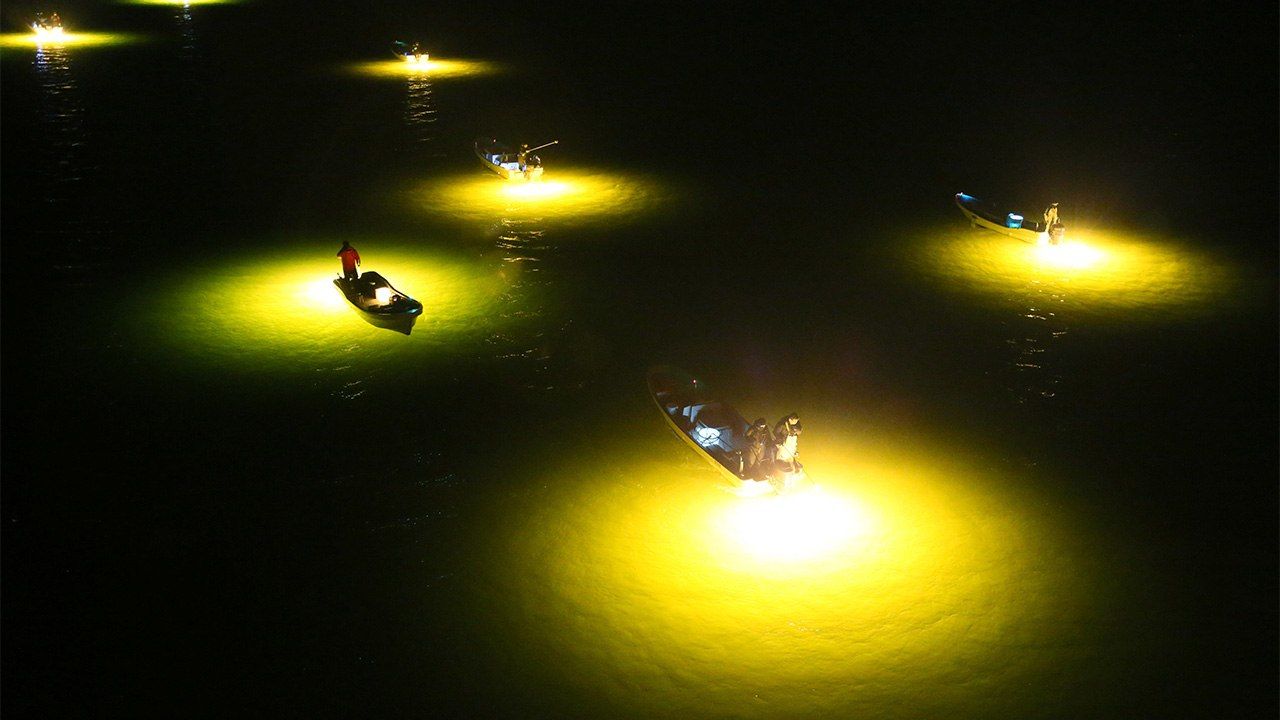 Gangsters Cash in on Endangered Eels

Society Mar 8, 2019
Amid international alarm over the decline in wild eel stocks, regulation of the Japanese eel industry is failing spectacularly, with poached or unreported “glass eels” accounting for some 40% of the domestic catch. In a recent interview, the author of a new book on ties between organized crime and the seafood industry shared some of his findings.

Despite dire warnings about the Japanese eel’s precarious status in the wild, the collection and distribution of immature “glass eels” to supply Japan’s aquaculture farms proceeds on a virtually unregulated basis, easily skirting local and international laws. The statistics tell the story: According to the Japan Fisheries Agency, Japanese eel farmers introduced 19.7 tons of glass eels into their aquaculture ponds in the 2015–16 season. Of that total, 6.1 tons were imported from abroad, indicating that at least 13.6 tons were caught in Japan. Yet the total catch reported to Japan’s prefectural authorities (who issue the fishing licenses) was only 7.7 tons. The remaining 5.9 tons—about 40% of the domestic total reported by aquaculture farms—were either poached by unlicensed operators or caught by licensed fishers but never reported. 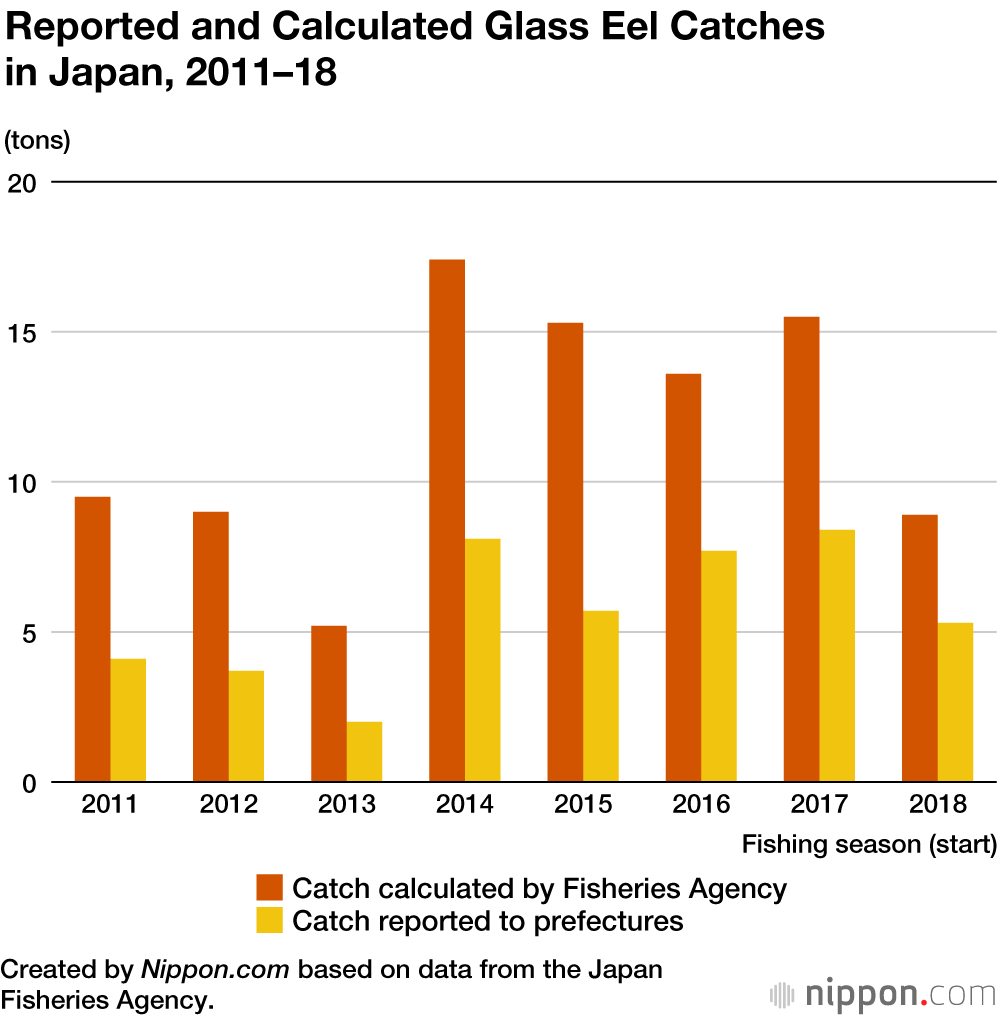 INTERVIEWER  Your recent book Sakana to yakuza [Fish and Yakuza] illuminates the seamy underside of Japan’s seafood industry. What did you find out about eel fishing and distribution in Japan?

SUZUKI TOMOHIKO  For the most part, the people who fish for glass eels are a different breed from your typical fisher. A lot of them work in construction or other industries the rest of the year and head out to the coast in the winter months to supplement their income by catching glass eels, which is extremely lucrative. In some cases, I found that these operations were under the control of local yakuza gangs.

Technically, the harvesting of immature wild eels isn’t even allowed under prefectural statutes. The way it works is that the prefectural governor issues a certain number of “special licenses” each year, on the condition that the catch is sold only to local eel farms [at prices set by the prefecture]. But the official price is way below the actual market price. When the official price is, say, 1 million yen per kilogram, and one can realize two or three times that much using back channels, people will use the back channels.

Miyazaki Prefecture sets the official glass eel price first, and Kagoshima uses that as a basis for its own pricing. Okayama Prefecture, which is famous for wild-caught eel, hardly has any eel farms, so the glass eels caught there are practically all sold illegally, outside the prefecture.

Licensed eel fishers are required to report their catch to the prefecture, but underreporting is rampant. You can catch 500, report that you caught 200, and distribute the remaining 300 through back channels, and no one’s the wiser. A glass eel is about the size of a toothpick and weighs less than a gram, so it’s not hard to transport them without drawing attention. From there, the system gets very murky. Some of the eels are bought by legitimate wholesalers; others go through shady suppliers tied to organized crime. Miyazaki Prefecture has cracked down hard on organized crime, but some of the eel distributors are former yakuza. 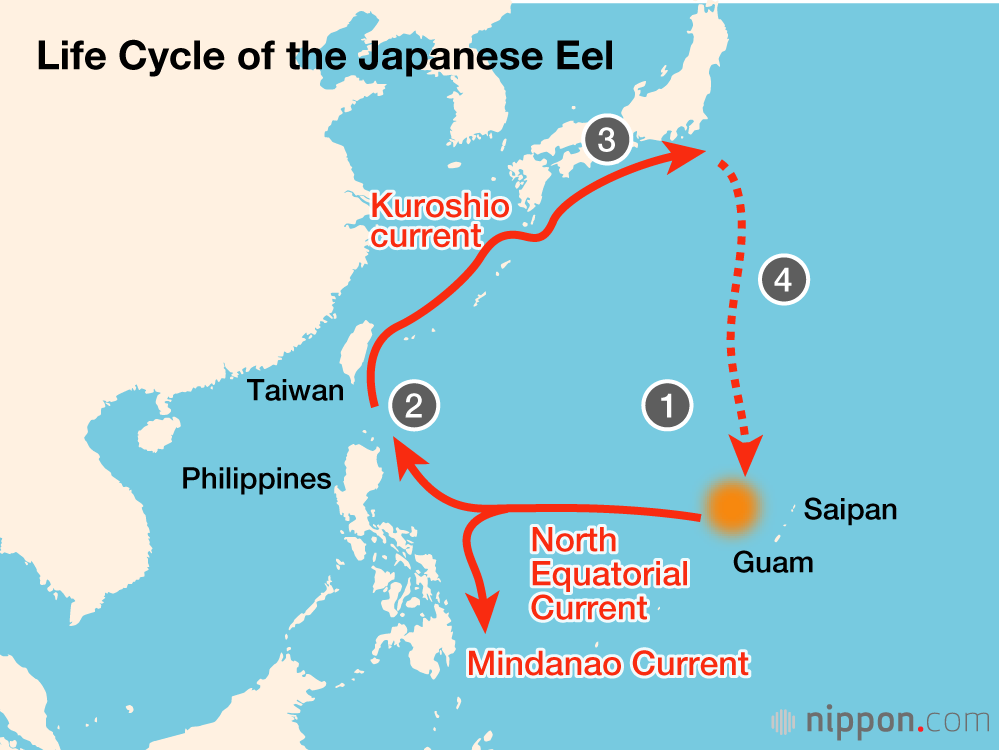 1  Eggs spawned west of the Mariana Islands
2  Larvae drift on ocean current, growing to about 6 cm (glass eels)
3  Elvers mature and spend 5–15 years in estuaries and rivers
4  Mature eels return to the sea to spawn

INTERVIEWER  The glass eel catch has been on a downward trend overall, and there are big fluctuations from year to year. It sounds like the black-market eels will soon outnumber those sold by designated distributors at official prices. How can eel farmers stay in business with market prices spiking that high? 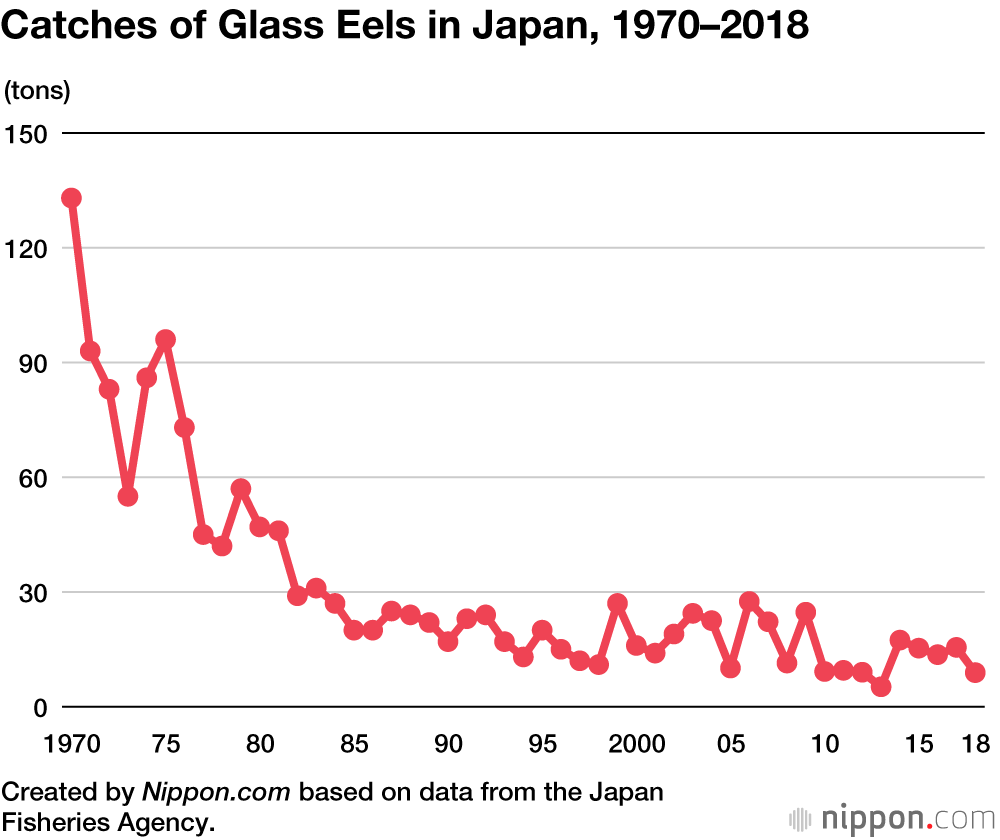 SUZUKI  The black market depends on the patronage of the big eel farms. They’re the only ones that can afford to buy the glass eels at those inflated prices. These are big outfits that run their own processing and packaging facilities in addition to shipping live eels to market. They contract in advance with big department stores and supermarkets to supply tens of thousands of packaged grilled eels for the midsummer Day of the Ox [traditionally associated with consumption of eel]. They need to buy huge quantities of glass eels the previous December or January and raise them quickly to meet that demand. So, they’re willing and able to pay top prices to get hold of early glass eels. Eels caught later in the season don’t go for such high prices.

Recently, there’s been a welcome trend toward direct contracts between fine unagi restaurants and responsible small farms that take the time to raise their eels at a normal pace, with an eye to flavor and safety. That kind of sustainable partnership is becoming more common.

Meanwhile, some of the big aquaculture farms have been trying to take control of the supply chain to secure the quantities of glass eels they need to meet the midsummer demand. One major farm that was branching out into glass eel distribution hired a former police officer with years of experience dealing with organized crime in the area. They were clearly concerned about coming into conflict with local racketeers once they ventured into glass eel supply and distribution.

INTERVIEWER  Your book also claims that big Japanese eel farms are complicit in the smuggling of glass eels from Taiwan, which prohibits the export of glass eels.

SUZUKI  The glass eel season begins earlier in Taiwan than in Japan, near the end of October. So, Taiwanese glass eels are your best bet if you want them to be fully grown and ready to ship by the next Day of the Ox. Before the season opens in Taiwan, the big Japanese producers travel there and secure their contracts with traffickers by wining and dining the brokers.

Originally, Taiwan wanted to negotiate a deal in which it would export its early glass eels to Japan provided that Japan would supply Taiwan with glass eels a bit later in the year, but Japan refused to lift its restrictions on eel exports, so Taiwan retaliated. Now, Japanese businesses are working hand in glove with Taiwanese criminal elements to bring the glass eels into Japan via Hong Kong. These imports from Hong Kong are technically legal, so the transaction is carried out in the open with receipts and what have you. But glass eels aren’t caught in Hong Kong, and there’s plenty of evidence that the trade is based on large-scale trafficking.

INTERVIEWER  You wrote about actually visiting a Hong Kong facility that collects glass eels for export.

SUZUKI  Japanese journalists who cover the eel issue have known about this smuggling route for some time. But until now, none of them had actually seen a distribution facility. I was introduced by a Japanese producer as someone getting started in the business, and that’s how I got in.

From the outside, it looked like a normal warehouse plopped in the middle of the countryside. It was surrounded by a tall fence, and it had security cameras. There were also dogs prowling loose around the compound. Given the high value of the commodity they handle, they want to take every precaution against theft.

I talked to the man who runs the facility, and he told me that his main line of business was gambling. I can’t say for certain that he’s a member of a triad, but he’s clearly involved in underworld activities.

When Japanese producers make their annual pilgrimage to Taiwan to arrange their shipments, they probably don’t think they’re doing anything wrong. They view it as a necessary workaround, since they can’t import glass eels directly from Taiwan. But the role of this criminal element is keeping reputable companies from entering the eel distribution and import business.

An End to Laissez-Faire

INTERVIEWER  Do you think that the Fisheries Agency and prefectural authorities are doing enough to crack down on poachers and smugglers?

SUZUKI  Eel stocks are plummeting worldwide, and there’s talk of regulating trade in Japanese eels under the CITES [Convention on International Trade in Endangered Species] treaty. At this time, it’s ridiculous that the prefectures still have the authority to issue permits for glass eel fishing. Japan’s eel fisheries should be under national management. This patchwork of prefectural regulations is a big factor contributing to the growth of the black market.

I’m also mystified by the Fisheries Agency’s limit on the glass eels that aquaculture farms can introduce into their ponds each year [217,000 tons]. The farms can’t get hold of that volume now, even with all the poaching and smuggling going on. This is no way to manage resources. In Japan, the total allowable catch for virtually every species is set higher than the actual catch.

In covering issues surrounding the Japanese eel, I’ve come to see that this is not a fish for mass consumption. We need to limit how much we consume. How to go about that is something we’re going to have to debate, but we have to come up with an approach that really works.

(Originally written in Japanese by Ishii Masato of Nippon.com and published on February 22, 2019. Banner photo: Night fishing for glass eels at the mouth of the Yoshino River in Tokushima, January 2017. © Jiji.)