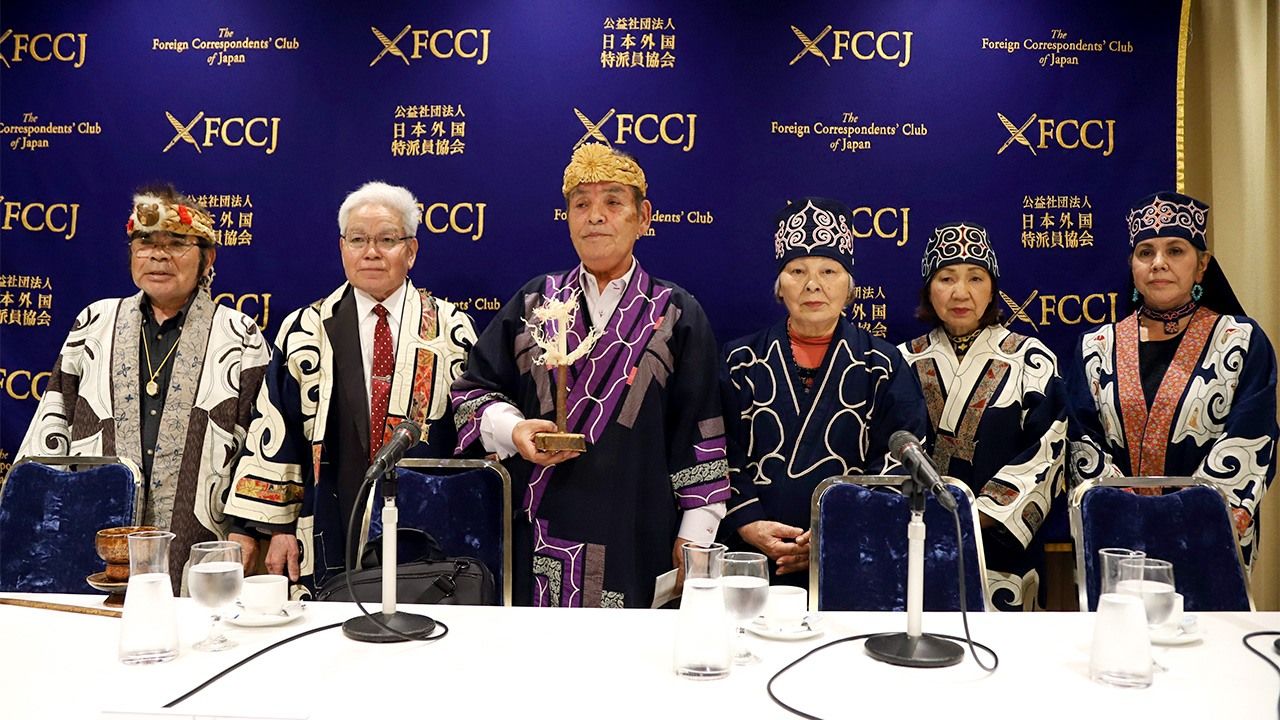 No Rights, No Regret: New Ainu Legislation Short on Substance

Politics Apr 26, 2019
New legislation recognizing the Ainu as indigenous to Japan is not as groundbreaking as backers of the law imply. Notably absent is an apology for how Ainu have been treated historically and any mention of restoring native rights.

The Japanese National Diet on April 19 replaced the earlier Ainu culture promotion act with a new law that promises to “realize a society that will respect the pride of the Ainu.” Although the bill is seen by many as long overdue, Ainu opponents held a press conference at the Foreign Correspondents’ Club of Japan on March 1 calling for its withdrawal on the basis that there is no mention of restoration of indigenous rights like fishing and land that have been core components of similar legislation in Western countries.

Discussion of a new Ainu law first began back in 1984 when the predecessor to today’s Ainu Association of Hokkaidō pressed for the adoption of legislation it had drafted. At the time, the Former Aborigines Protection Act of 1899, a discriminatory law promoting enforced assimilation and including the offensive term kyū dojin (“former aborigines”) in its title, was still in effect. The proposed legislation looked to replace the outdated act and added rights for the Ainu people like a self-support fund and seats in the legislature based on ethnicity. When the law finally passed in 1997, though, it had been considerably altered to narrowly focus on promotion of Ainu culture, sparking criticism for its lack of indigenous rights.

Debate of the topic gained fresh momentum with Japanese support for the Declaration on the Rights of Indigenous Peoples that the United Nations adopted in 2007. The following year, the Diet passed a resolution urging the administration to recognize the Ainu as indigenous, and the government established an advisory panel to consider Ainu policy. After submitting its report in 2009, the Cabinet Office the same year set up a group to develop policy. This produced the recently passed 2019 bill.

Prior to the law, the government decided to establish the National Ainu Museum and Park in Shiraoi, Hokkaidō. Set to open in spring 2020, the site is to host exhibitions, research, cultural learning, workshops, and information sharing events, and will also include a park and an area for memorial services.

No Regret, No Apology

Given this background and the new law’s noble-sounding promise to realize a society that will respect the pride of the Ainu, it is easy to imagine that Japan has finally implemented policies in line with the wishes of the Ainu people. A closer look, however, reveals numerous lingering issues.

While it is being reported that this is the first time for the Japanese government to pass a law recognizing the Ainu as native people, it does not guarantee any rights included in the UN Declaration on the Rights of Indigenous Peoples. Authorities have put forward the difficulty of recognizing whether people are indigenous and the unsuitability of measures taken in various other countries as reasons not to follow the UN declaration. However, this insistence on crafting a “Japanese-style” approach to policy on indigenous people is merely an excuse. Collective rights, particularly self-determination and land rights, are crucial to the identity of indigenous people, but the government shows not the least intention of granting them.

Given that the Diet already passed a resolution recognizing the indigenous status of the Ainu in 2008, there is little significance in enacting a law more than a decade later that only repeats this. Notably lacking from the act are mentions of regret for discriminatory colonization policies in Hokkaidō and an apology for the suffering of the Ainu. The glaring absence of any sense of wrongdoing was one of the reasons Ainu opponents called for the withdrawal of the legislation to begin with.

What then does the new law include? In addition to the terms of the existing culture promotion act and plans to run the National Ainu Museum and Park, there are articles related to regional planning. These, however, are concerned with promoting tourism. Media coverage has tended to focus on this area, and while tourism is important, there is no need to pass a new law for this alone.

Reading Between the Lines

I believe the current situation is the result of many in Japan seeing Ainu policy as a peripheral issue and the government’s subsequent attempt to bring it into the mainstream in a way that suits its own purposes. Authorities have used the same method since first drawing up the culture promotion law of slipping their intended policies into a report commissioned from the advisory panel, a private consultation body.

The policy development group conducts its discussions behind closed doors, forming the framework for new measures. Although there are Ainu participants, their numbers are limited, resulting in Ainu people who do not take part being left in the dark as to the decision-making process.

The stated goal of both the previous law and the new legislation to increase the understanding of Japanese citizens is also an issue. The government says further development of policy is required because of insufficient knowledge among citizens, but that is to confuse cause with effect. It is the Japanese government that has obstructed greater understanding, including of the historical background, and misled the public. It is disingenuous then for it to talk of a lack of understanding when it has failed to provide any explanation of indigenous rights in the first place.

The Link to Prejudice

A further issue related to public understanding is ongoing prejudice against Ainu. This is a serious matter that needs to be sternly addressed. However, the new legislation mentions it only once. Very recently, a Diet member expressed discriminatory views during debate of the legislation, stating that “only 20% of the Ainu Association of Hokkaidō actually have Ainu blood,” the insinuation being that very few members of the group are even “real Ainu.”

Debate online has also illustrated a distorted comprehension of the law, with some people opposing the legislation not for its shortcomings, but because they see protecting the rights of Ainu as an attempt to split the nation. This is fundamentally linked to recent hate speech that denies the existence of the Ainu people themselves. Hate speech is a serious issue. However, Japanese government efforts to address the problem have been roundly criticized for failing to come even close to the international standard with regard to policy toward indigenous peoples and protection of basic human rights. Legislators must earnestly attempt to deal with these issues if they expect to win support for their efforts from the Japanese public and the broader global community.

A major issue related to human rights is the treatment of Ainu remains collected from grave sites and now stored in universities and museums. Hokkaidō University has more than 1,000 sets of remains, most of which were collected against Ainu wishes. The ongoing plan is to move them to the National Ainu Museum and Park. Despite a campaign to return the remains, very few have actually been given back, and most are being moved to the new facility on the premise that there are few Ainu willing to receive them. Given the methods of those who originally collected the remains, they should be returned with an apology, but it is clear from comments by researchers involved with the plan that they wish to continue studying the remains at Shiraoi. There is also the issue of the treatment of non-skeletal items like blood samples collected for research purposes that has not even become part of the debate yet.

A Role for the Media

I wonder how interested the government really is in respecting Ainu pride. One hears a lot these days about a multicultural Japanese society that includes Ainu people and non-Japanese citizens, but I believe at present the government is pushing the idea of inclusiveness for its own purposes. For Ainu, it is a superficial inclusion, centered on tourism and void of apologies and guarantees of rights. The plan for a National Ainu Museum and Park has been linked to the Tokyo Olympics in 2020 and was likely just an attempt by the government to win popularity and deflect from ongoing issues like the statistics scandal and the military bases dispute in Okinawa.

I have heard some Ainu and politicians express that the new law is an important first step, but this kind of rose-tinted thinking should be avoided. Naturally, Ainu have differing opinions, and I understand that some, including Ainu Association members, have high hopes for the law. Yet expecting the government to achieve anything substantive on indigenous rights requires Ainu groups to wield a much greater degree of influence over the policy-making process than they currently do.

In a February editorial, the Hokkaidō Shimbun, which has provided the most detailed coverage of the legislation, wrote of the significance of the first law recognizing the Ainu as indigenous people, although, as I have shown, this is an overstatement. However, the Japanese and international media focus on the Ainu offers the chance to deepen the debate. As the government is unlikely to further public understanding, the media has a vital role to play. To achieve a policy that meets international standards, I hope the press will keep a critical eye on the government and provide continuous, in-depth coverage.

(Originally published in Japanese on April 1, 2019. Banner photo: Ainu people express their opposition to the new Ainu legislation at the Foreign Correspondents’ Club of Japan on March 1, 2019. © Tsunoda Yoshio/Aflo.)