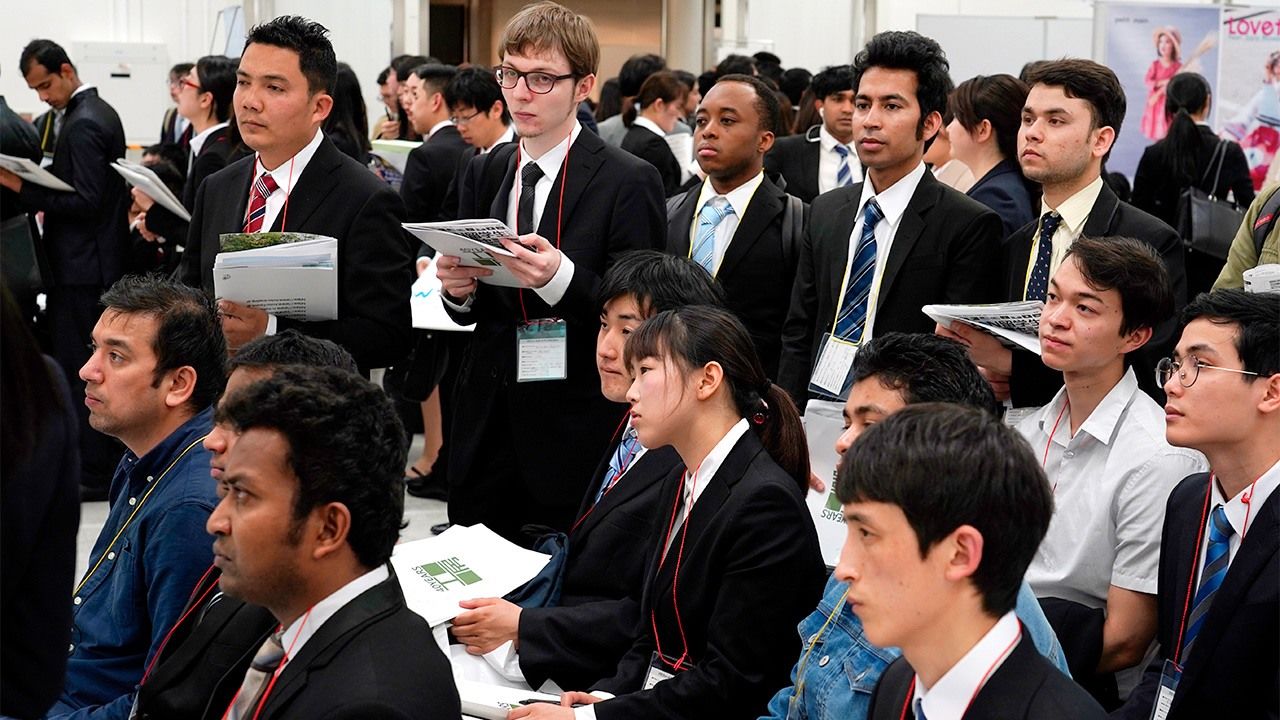 Society Education Culture May 8, 2019
Each year thousands of international students enter Japan under the sponsorship of poorly regulated Japanese language schools. The author discusses the flaws in the current system and calls for public intervention to attract and support serious students from abroad.

Between 2011 and 2018, enrollment in Japan’s language schools (officially referred to as “Japanese language institutes”) increased 3.5-fold. By far the sharpest increase was among Vietnamese and Nepali students, whose numbers rose by a factor of 29 and 9.4, respectively. Most of these students work part time, as they are permitted to do under Japanese immigration law. Some have even entered Japan primarily for the purpose of finding work—often with the help of unethical recruiters and the complicity of Japanese language schools. This has led to an unfortunate tendency to paint all Asian Japanese-language students with the same broad brush, as “migrant student workers” or “fake students.”

Dedication and Its Rewards

Such sweeping characterizations are unfair to the many talented and dedicated international students who have worked their way through language school to enroll in Japanese universities.

This is no mean feat. As a language-school director I interviewed a few years back pointed out, Japanese students preparing for college entrance examinations are urged to devote themselves to their studies full time. No one who spends 20 hours or more working as a part-time employee is expected to gain admittance to an elite university. To accomplish that while learning a foreign language and adjusting to life in a foreign country is nothing short of remarkable. Yet I can cite many cases of international students who attended Japanese language schools in Japan while earning a living in part-time jobs, gained admission to top-ranked Japanese universities, and now enjoy successful careers, either in Japan or in Japan-related jobs in their country of origin.

I am reminded of a Chinese acquaintance who returned home after studying in Japan and now has a job in middle management at a major Japanese bank. He told me that his experience working his way through school on a Japanese newspaper scholarship made him who he is today. In Vietnam, I met another former recipient of a newspaper work-study scholarship, today employed as vice-president of a Japanese firm’s Vietnamese affiliate. He recalled how he would get up as early as 2:00 a.m. to deliver newspapers, after which he would attend Japanese language classes and finally hit the books to prepare for his university entrance exams. He received a student leadership award as an undergraduate and went on to study in graduate school under an honors scholarship from the Japanese Ministry of Education, Culture, Sports, Science, and Technology. His inspiration was Ngyuyen Duc Hoe, the founder and first principal of Dong Du Japanese Language School in Ho Chi Minh City, who—drawing on his own experience in Japan—urged his students to work tirelessly and never forget why they were studying abroad. Another graduate of Dong Du enrolled in a Japanese language school in Iwate Prefecture and worked at a local rice cracker factory while studying for her entrance exams. She was admitted to one of Japan’s elite national universities and now works for a Japanese corporation in Yokohama. Then there is the Nepali scholar who started out at a Japanese language school, eventually earned a doctoral degree at a Japanese grad school, and now teaches at a university.

These are just a few examples of international students who, overcoming tremendous obstacles, worked their way through school in Japan and are now contributing to Japanese business and society. Had they been subject to stricter financial screening when applying for student visas, they might never have come to Japan.

The fact is that Japan is not typically the first choice for international students. The language barrier can be formidable—particularly if one must learn thousands of kanji, the Chinese ideographs used in the Japanese and old Korean writing systems, as well as in written Chinese. Students of means from developing countries tend to choose English-speaking countries as their destination for overseas study—the United States if they can afford it, Australia or Britain if their resources are more limited.

On the other hand, an important inducement for those of limited means is looser student-visa regulations with regard to part-time jobs, which make it easier for them to study abroad. In Japan, international students who submit the necessary paperwork are permitted to work up to 28 hours a week (and up to 8 hours a day during extended school holidays). In Australia, the limit is 20 hours; in France and Germany, it is 18.5 hours; and in the United States, off-campus employment is permitted only in special cases.

Although permission to work longer hours has made Japanese language and university study accessible to international students of limited means, there is no excuse for admitting applicants who lack not only money but also scholastic aptitude and the desire to learn. How have such individuals found their way into Japan?

The surge in enrollment by students from non-kanji-using countries such as Vietnam and Nepal began in 2013, triggered by a sharp drop in incoming students from China, South Korea, and Taiwan after the Great East Japan Earthquake, tsunami, and disaster at Fukushima Daiichi Nuclear Power Station in 2011. Alarmed over plunging enrollment, Japanese language schools launched a major push to attract students from other Asian countries—often with the help of local recruiters, who were reportedly paid by schools ¥70,000–¥150,000 per recruit. Before long, some of these locals went into business as international student recruiting and consulting services. Eager to attract as many applicants as possible, they stressed the abundance of money-making opportunities in Japan and in some cases actively recruited young people whose main objective was not learning but earning.

Recently, Japanese authorities have tightened up screening criteria for student visas, but the main focus of their scrutiny appears to be the applicant’s financial resources. They need to start putting more emphasis on academic and linguistic proficiency and exploring options for economic aid to highly able and motivated students with insufficient resources of their own.

Living on a Shoestring

Another basic issue surrounding international students at Japanese language schools is the lack of financial and other assistance available to them. Foreign students are at their most vulnerable during the time when they are enrolled in Japanese language schools, since they are new to the country and are still learning the language. Yet under Japan’s current system, this is precisely when assistance is hardest to come by.

The basic reason for this state of affairs is that many Japanese language schools are not authorized educational institutions and are therefore not under the jurisdiction of the Ministry of Education. This greatly reduces the students’ opportunities for scholarships and other types of benefits, such as the ability to purchase commuter passes at reduced student prices and exemption of their tuition fees from consumption tax.

The tables below compare the monthly budget of Japanese language school students from kanji-using countries (China, South Korea, and Taiwan) with those from non-kanji-using countries. From 2011 to 2017, remittances from home to Chinese, Korean, and Taiwanese students rose 27% on average. Remittances to other students dropped by 24%, leaving an increasing fraction of them dependent primarily on income from part-time employment. Moreover, spending on food and housing rose among the former group but fell among the latter. In 2017, the average food budget for students from the latter group worked out to a mere ¥800 per day. Clearly, many of these students are living on a shoestring.

Source: Made by the author based on data from the Survey of Living Situation of Privately Funded International Students in Japan, published by the Japan Student Services Organization.
Notes:
1. Owing to exclusion of minor income and expenditure categories, the sum of the components listed does not equal the total.
2. Not all students receive remittances from home or do part-time jobs.

The decline in average remittances from home, as well as in food and housing expenditures, most likely reflects the increase in the share of students from relatively low-income countries like Vietnam and Nepal. (In 2015, Vietnam’s per capita gross domestic product was US $2,065, while Nepal’s was US $747, according to World Bank data.) Such students face daunting obstacles to success. Students from non-kanji-using countries tend to take more time and effort to master Japanese compared with those from kanji-using countries. Exhausted by the demands of unaccustomed work in a strange environment, many have failed to gain the language proficiency needed to study at a Japanese college or university. Some have fallen ill and been obliged to return home early. Worst of all are the cases of students who have died suddenly of overwork or committed suicide.

A Vital Investment in Human Resources

Sakanaka Hidenori, director of the Japan Immigration Policy Research Institute and an advocate for immigration reform, argues that Japan, with its aging population and disadvantage in recruiting a highly skilled workforce because of the language barrier, must adopt an immigration policy oriented to the development of human resources. International students equipped with youth, expertise, and Japanese proficiency are an ideal target of this policy. Japanese language schools should be viewed as core infrastructure for the implementation of this policy, on which Japan’s future may well depend. To that end, the government must step in and provide the necessary intervention to ensure high-quality instruction and proper support for deserving students.