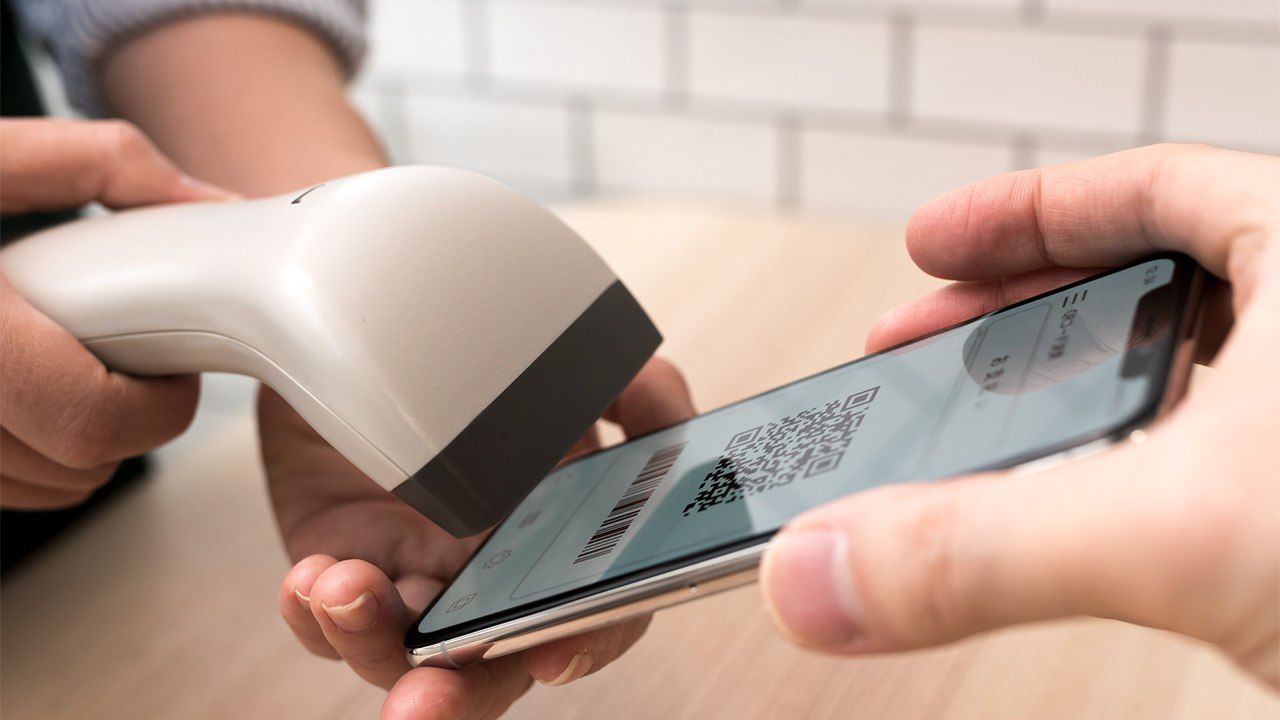 The State of Cashless Payments in Japan

Economy Society Jul 4, 2019
E-money is convenient, letting you quickly pay for coffee to go without fumbling for change. While its use appears to be spreading in Japan, the country is still lagging behind in the use of cashless payments compared to other nations.

The Japanese government has defined payments using credit cards, debit cards, and e-money as “cashless payments” and is aiming to achieve a key performance indicator—the ratio of cashless payments to private final consumption expenditures—of 40%, the global average, by 2025, the year of Expo 2025 Osaka. 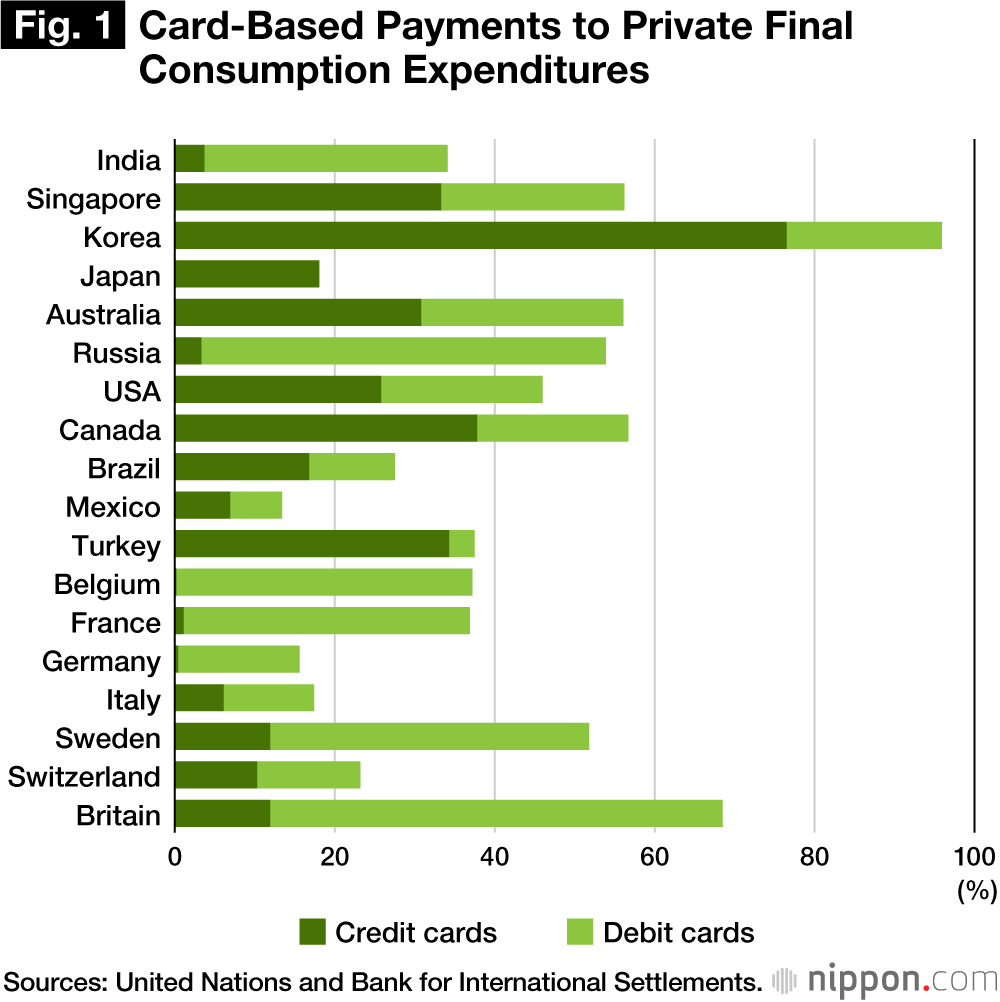 Japan’s cashless payment ratio is thought to have risen to 24% in 2018. While this shows some progress compared to the graph, this is still far below the global average. For this reason, Japan is frequently called an underdeveloped nation in cashless payments.

What this means is that credit cards and debit cards are used to a lesser degree in Japan than in other nations. The Japanese government aims to achieve its KPI of the wider use of cashless payments through card-based payments and e-money.

The initial objective of the government in boosting cashless payments was primarily to promote foreign tourism to Japan. In view of the 2020 Tokyo Olympic and Paralympic Games and the need for regional revitalization, the government has sought to encourage foreign visitors to use the credit cards and debit cards they are already comfortable with to for their spending, thereby invigorating Japan’s economy.

Accordingly, there is some merit in easing the use of foreign credit and debit cards in Japan by making payment terminals more widely available, one way for Japan to advance beyond its undeveloped-nation status in cashless payments. In a parallel measure, QR-code payment terminals are being installed in large cities and at tourist destinations for visitors from China.

A Leader in E-money

E-money is used in about 2% of payments in Japan, making Japan one of the nations with the highest use of e-money in the world. Of the nations listed in Chart 1, only Italy, Russia, and Singapore boast similar levels of usage; e-money’s share of payments is less than 1% in other nations.

A domestically developed noncontact chip (FeliCa) is used for e-money transactions in Japan. Japan was the first nation to begin using e-money, around the year 2000, and the first nation to launch mobile payments in 2004 when FeliCa chips were added to cell phones, a service that came to be known as a mobile wallet.

It cannot be said, however, that mobile payments using e-money have spread widely, and card-based payments continue to dominate. Factors that may have worked against the spread of e-money are the inability to transfer e-money when changing cell phones and the scarcity of places where cell phones can be charged.

A matter that bears noting about the cashless payment ratio is the existence of payment methods other than card-based payments and e-money that do not use physical currency. Examples are such services as bank credit transfers and the transfer of funds between individuals. We can see in Figure 2 that, as of 2017, cash payments (banknotes and coins) accounted for less than 50% of private consumption in Japan. Many people in Japan pay rent and public utilities through automatic credit transfers from bank accounts, and the extensive payment services of financial institutions cannot be ignored. 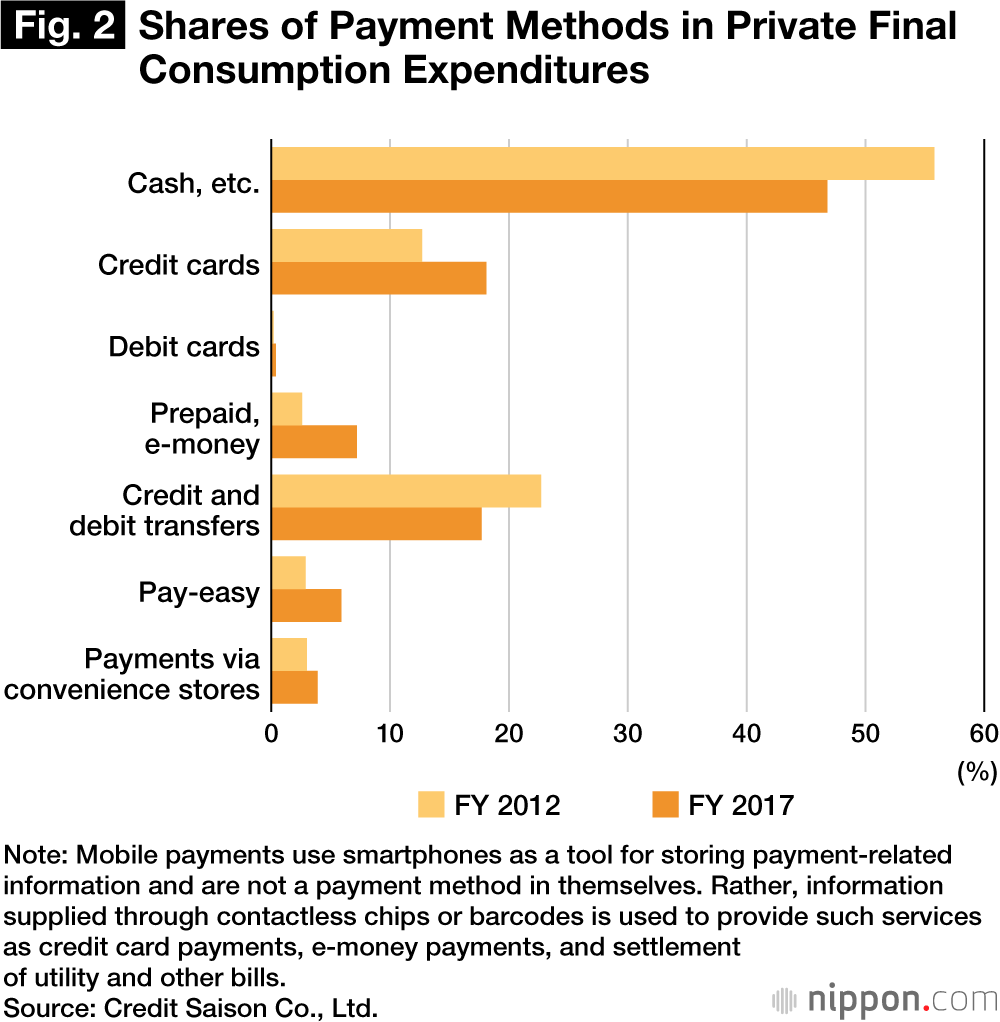 It is mainly large companies that are leading Japan toward a cashless society. Goals cited in the government’s Investments for the Future Strategy 2017 include the promotion of inbound tourism along with operational efficiency and the use of big data. Japan is at the stage of promoting cashless payments for the entire range of consumption.

As Japanese society ages and as its birthrate declines, cashless payments are being viewed as a possible response to the coming decrease of the labor force. The idea is to encourage operational efficiency by reducing the need to handle cash.

Specifically, going cashless will save time in cash management, reducing the need to maintain an adequate supply of change and to add up cash on hand after stores close, as well as cutting down the risk of theft and loss. The labor saved will permit the reassignment of staff, for instance in positions where they can deal with customers. Already large restaurant chains are establishing experimental no-cash restaurants, and convenience stores are installing self-checkout terminals. These efforts in going cashless are achieving some positive results.

Should the use of cashless payments spread steadily, financial institutions will be able to achieve efficiencies in branch and ATM operations. In autumn 2018, improvements were made to the interbank settlement system, and it became possible to provide real-time remittances for the full 24-hour day. Financial institutions are promoting the use of debit cards, and they are successively offering mobile remittance services.

Expectations are high for the application of big data in cashless payments. Companies are seeking to expand sale opportunities by collecting purchase history data in order to optimize the placement of products and provide advertisements that match the tastes and interests of individuals. Since smartphones make it easy to collect purchase histories and position data, large communications companies and IT companies are moving into the market for smartphone payments.

It has been noted that cashless payments have the characteristics of a platform—a service that connects users with users. One feature of platforms is the way their usefulness increases with the number of users, giving rise into a lock-in effect where customers become tied to particular products and services. One of the objectives of large companies entering the payment business is thought to be a desire to strengthen the retention of existing customers.

Small and medium-sized enterprises, however, are less enthusiastic about going cashless. SMEs benefit less from optimizing the placement of workers and from big data compared to large companies. In addition, such drawbacks as the cost of installing payment terminals and the cost of payment fees cannot be ignored. Unlike large companies in a strong negotiating position, SMEs pay a relatively high fee to payment service providers. It can also take two to four weeks to collect sales from many payment services, a burden on cash flow.

For these reasons, many SMEs are preferring to speed up the collection of funds through cash sales rather than paying the cost of payment services. For stores handling fresh foods and for businesses with thin margins and high turnover, there is no incentive to adopt cashless payments.

To encourage SMEs to go cashless, the government is planning to implement a reward points program where consumers making cashless payments at retail stores will be rewarded with points up to 5% of the value of their purchases. This program will be for a nine-month period from October 2019, when the consumption tax is hiked to 10%, to June 2020. The effect of this policy, however, will be limited unless it benefits SMEs in the long term. As a result, it is highly likely that many stores will revert to cash payments once the rewards end.

Some consumers appear to avoid cashless payments out of concern for the cost of payment fees and labor that stores must bear. Surveys also indicate that consumers select payment methods based on whether there are economic benefits, such as reward points or discounts. In Japan’s more rural regions, where human relationships are strong, there may be a tendency to choose such relationships over economic benefits. In contrast, a cashless and efficient payment system is needed in large cities to reduce the stress consumers experience waiting in queues.

Based on the above analysis, cashless payments are expected to spread in Japan for goods and services that are of high value or provided by large companies. What is needed for goods and services that are of lower value or provided by SMEs is the deployment of a public and nationwide payment method (such as mobile remittances) that will take the place of bank ATMs.