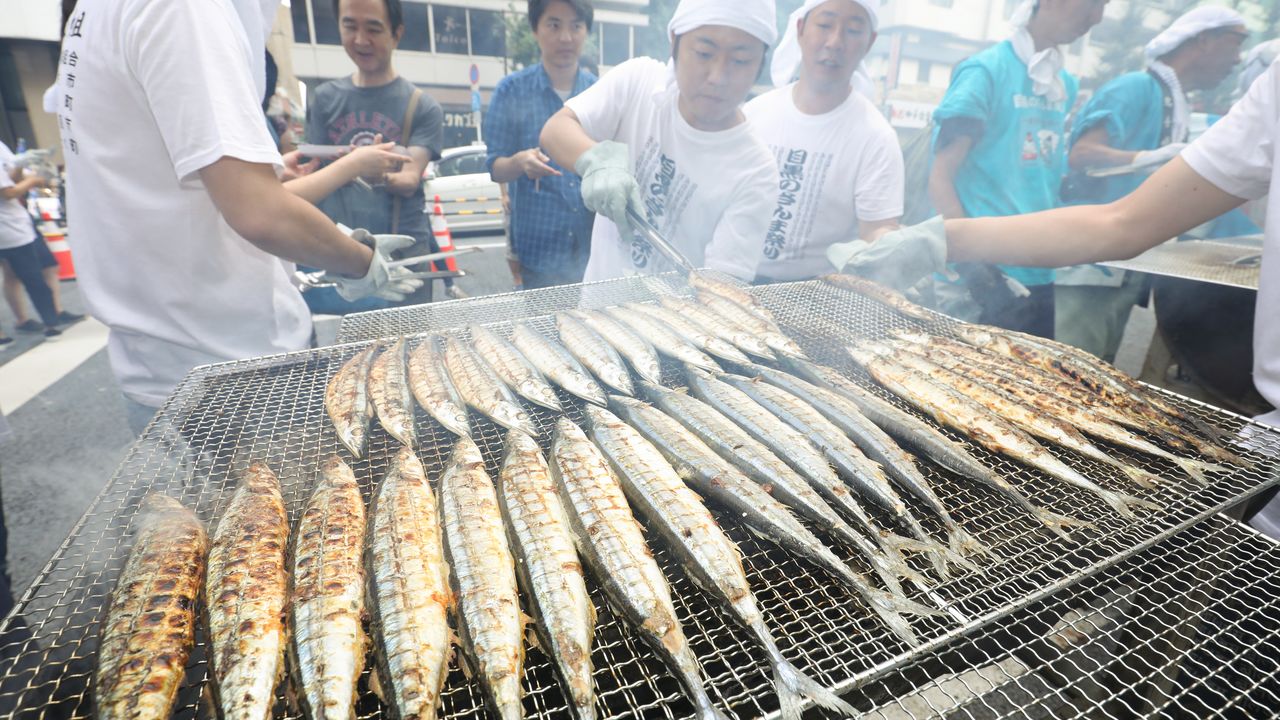 Economy Society Aug 29, 2019
Pacific saury have long been a familiar flavor of fall in Japan, but lower catches and a newly extended fishing season have raised concerns about declining fish stocks.

In Japan, sanma grilling slowly over glowing coals is a familiar symbol of autumn. However, 2019 has brought a seasonal variation to this traditional theme with Japanese fishing fleets heading into international waters in search of the savory fish, known in English as the Pacific saury, starting as early as late May.

Japan’s annual saury haul hovered between 200,000 tons and 300,000 tons until the late 1990s. However, catches have since fallen to around 100,000 tons. As a resource management measure, authorities established a total allowable catch of 260,000 tons for the season, which runs through the end of December, although fishing boats in recent years have been netting less than half that number. While the cause behind the drop in catches is unclear, analysis by the Japanese Fisheries Agency strongly suggests that saury stocks are seriously depleted.

Saury start life in the waters of the northwest Pacific near Japan. Juveniles mature as they migrate north to feeding grounds. In autumn, adults return south to spawn, traveling offshore of Hokkaidō and eastern Japan. Catches are concentrated in these waters, with hauls as far south as the port of Chōshi in Chiba Prefecture later in the season.

The Ministry of Agriculture, Forestry, and Fisheries previously restricted the fishing season for vessels over 100 tons to August to December. However, the agency says saury have increasingly stayed further out to sea during their southern migration. In addition, fishing grounds have developed in international waters in May, two months earlier than usual. Japan formerly monopolized saury fishing, but since 2000 Taiwanese and Chinese vessels have intensively fished shoals outside of Japan’s exclusive economic zone, and foreign catches, focusing on early summer, now exceed Japanese hauls. The ministry changed its regulations in response to calls by Japanese fisheries for an earlier opening of the season to counter growing overseas competition. 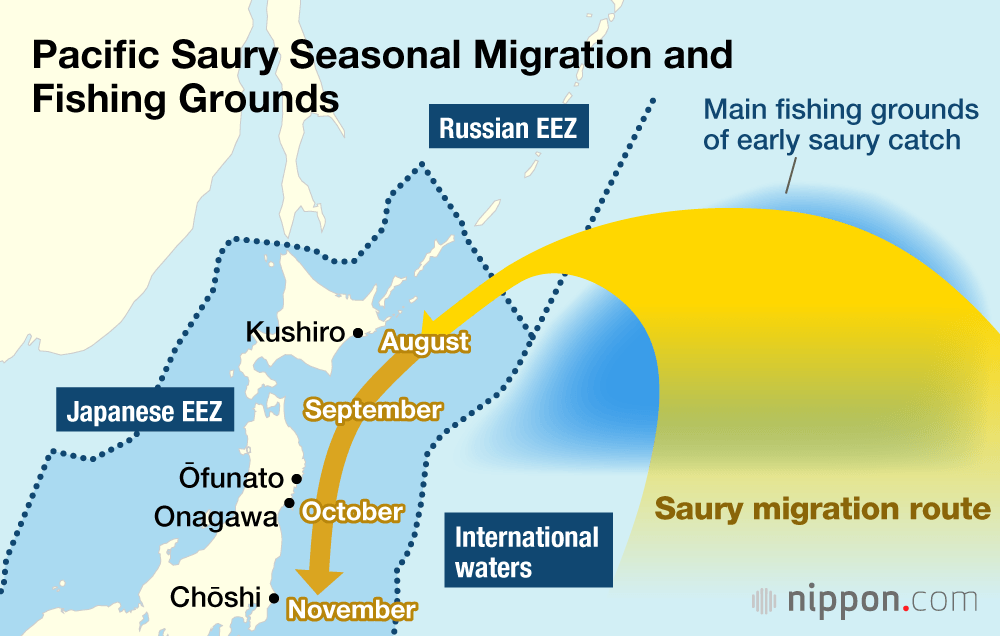 Intensive fishing of saury has increasingly taken place in international waters prior to fish starting their southward migration along Japan’s coastline. Schools have also tended to follow routes further away from Japan.

Complaints over Low Quality of Catches

Japan’s decision to move up the start of the saury fishing season has produced mixed sentiments. During a trip to Tokyo’s Toyosu Fish Market in late May, I spoke with a fishmonger who complained to me about the quality of fish. Looking disdainfully at the morning delivery neatly packed in rows of polystyrene boxes, he pointed out the saury were thinner and not even that fresh. “We decided not to buy any,” he grumbled. 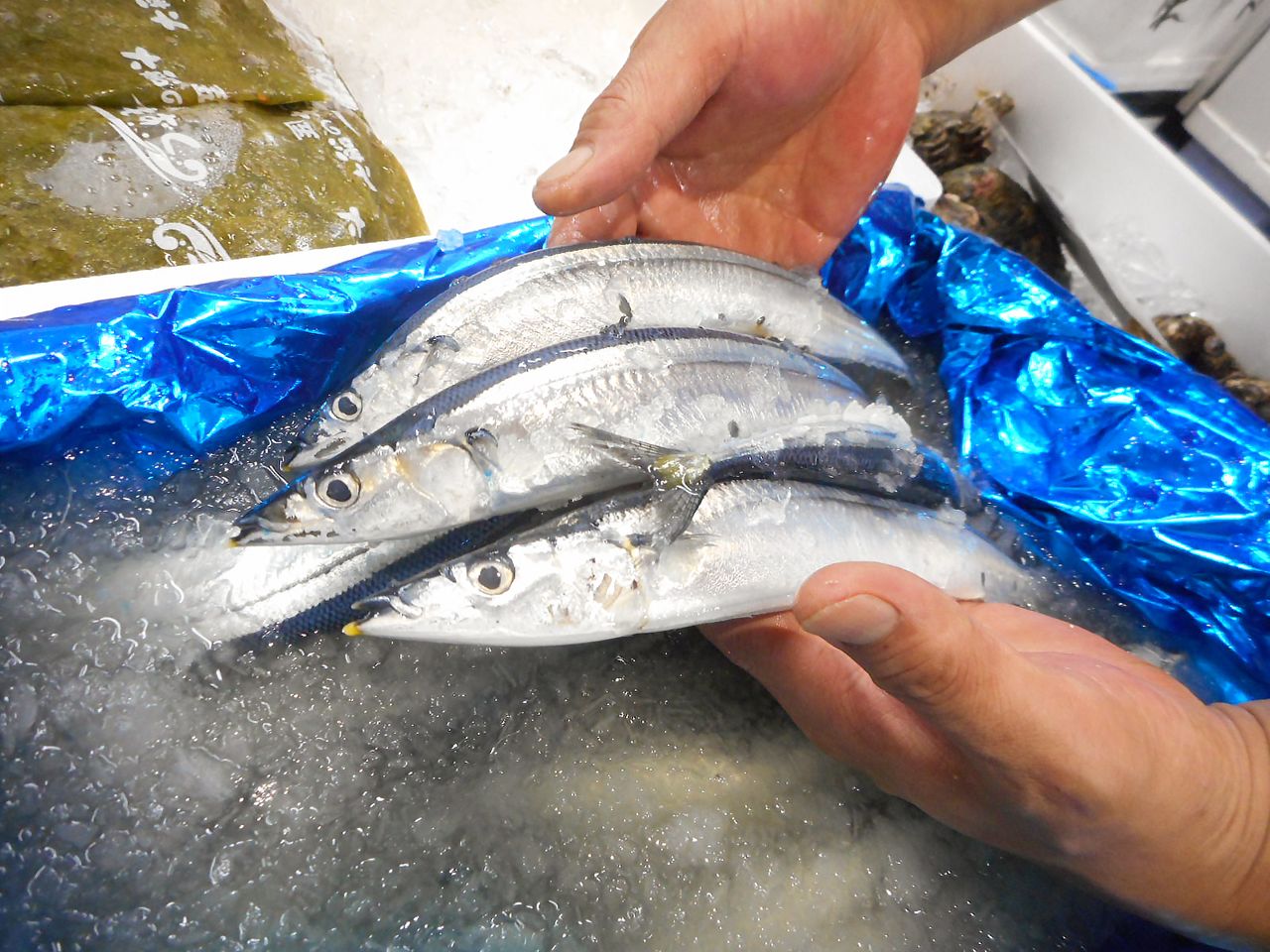 The lack of excitement over early season saury did not go unnoticed by wholesalers at Toyosu. An auctioneer from one company supplying fish directly from regional landing sites stated bluntly that “it’s too early in the season to stock saury, but we need to try to make some sales.” The employee, citing fierce competition among the five wholesalers at the market, explained that the firm cannot turn its back on suppliers, and that while there was some uneasiness, the company was hoping for a successful first auction.

The first catch sold at Toyosu Market this year was saury landed a few days earlier in Nemuro in Hokkaidō. Each fished weighed around 100 grams. By comparison, saury netted in autumn at the height of the season typically weigh up to 200 grams.

The wholesale price for the first saury shipment ranged from ¥40 to ¥200 a fish, down about a third from last year. Unimpressed with the quality, one experienced auctioneer recommended buyers consider Hokkaidō sardines instead. This year Japan enjoyed a bumper sardine catch with fish weighing as much as 180 grams, a hearty size for the species. The quality of catches were such that buyers even coined a new nickname, referring to the fish as “rainy season sardines” after the time of year they were landed. The auctioneer heartily gave them his stamp of approval, exclaiming that “they’re plump and fresh.”

A staff member of Toyosu’s Ryū, a sushi restaurant that dates back to the previous Tsukiji market, remarked on the popularity of the fish, saying that “the rainy season sardines are certainly plump, but catch quality has remained high through the season this year, so we keep buying them.”

In contrast, saury from ports such as Nemuro and Ōfunato in Iwate Prefecture remain on the small side, though fish size is slowly increasing. 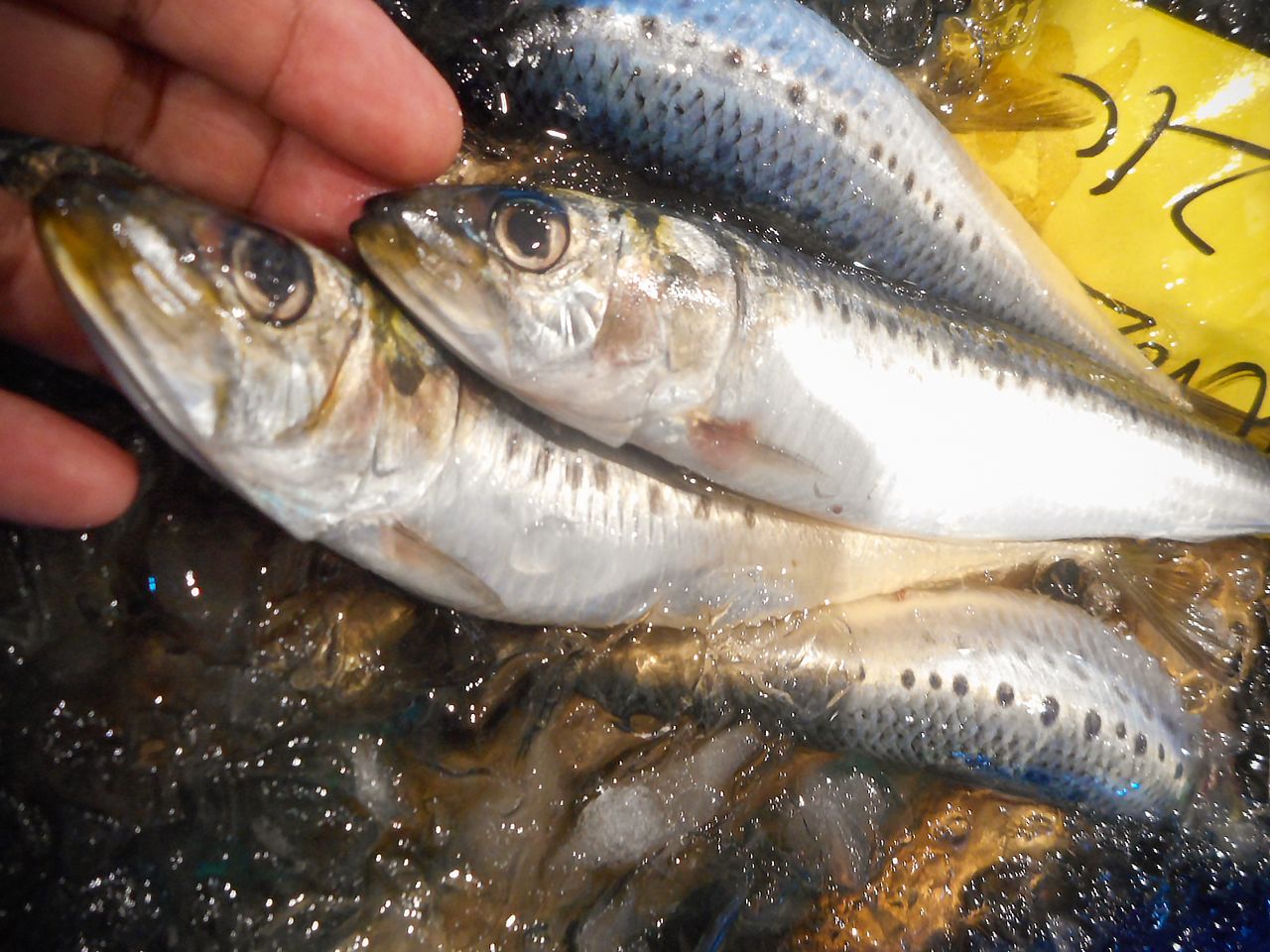 Sardines have gained popularity among consumers for their freshness and quality. (© Kawamoto Daigo)

Not all fishing ports along saury migratory routes have sent fleets out early, and some places like Onagawa in Miyagi Prefecture chose not to accept summer catches at all. This lead the local association of saury fishers in Onagawa to decide against making an early start out of concern for the quality of fish and limited number of places that would take catches

A port representative at Onagawa explained that even with good hauls, demand for saury does not typically pick up until after the Obon holiday in late August. Coho salmon, on the other hand, are a big earner in June and July, and the port saw salmon hauls of 100 tons on successive days. 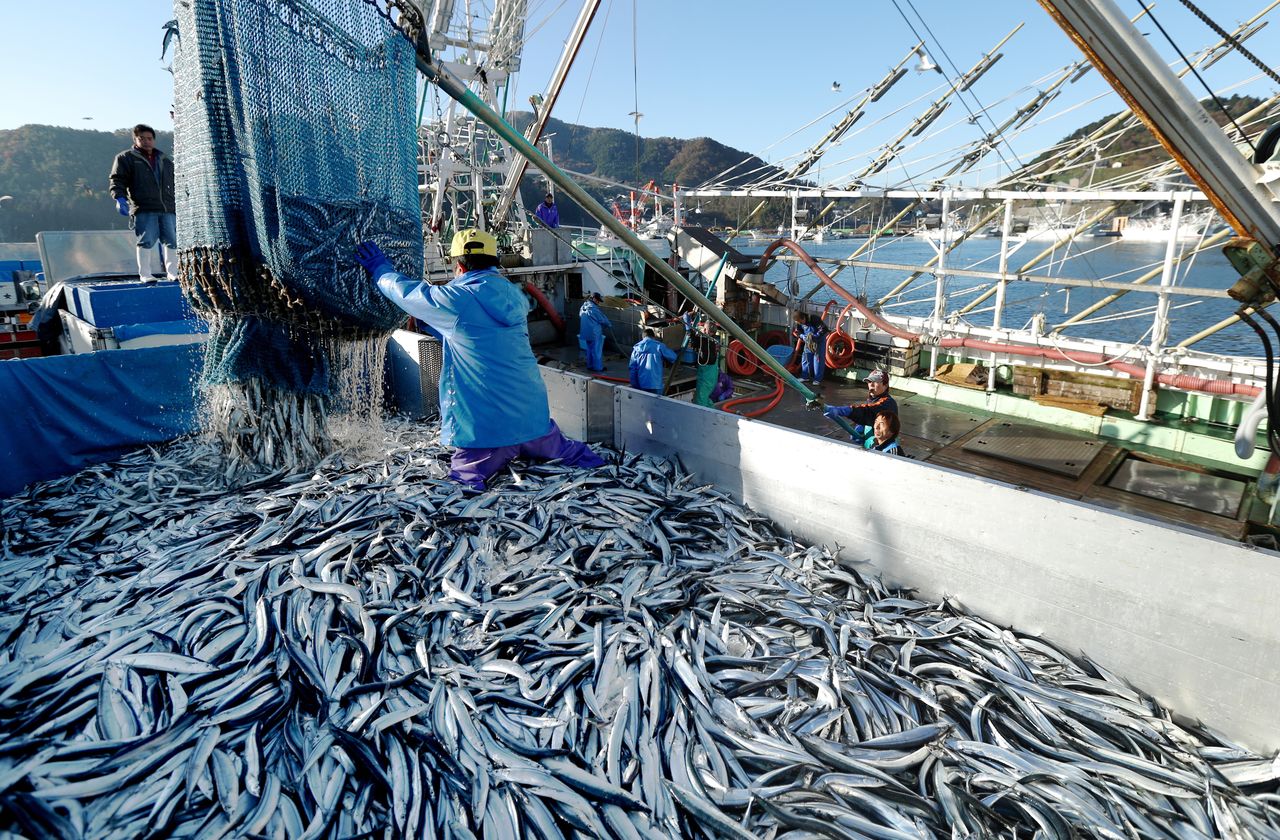 A fishing vessel unloads saury at the Onagawa Port in November 2012. Onagawa, Nemuro, and Ōfunato are three major fishing ports for the fish. (© Jiji)

According to a fishery association representative, vessels hunt for early season saury far off Japan’s coast in international waters around 160 degrees east longitude. However, away from Japan’s EEZ, Japanese boats must vie with Chinese and Taiwanese craft trolling the same area.

I heard a person involved in distribution remark to government officials that if Japanese operators get caught up in competing with foreign vessels, there is a real risk that traditional autumn hauls will decline. The Japanese Fisheries Agency has attempted to assuage such fears by assuring concerned parties that saury migrate along different routes and that not all schools of fish stick close to Japan’s coast.

Despite the government’s assurance that early fishing of saury does not significantly affect the autumn catch, alarm bells are sounding through the industry. In mid-July, the North Pacific Fisheries Commission, an international body comprised of eight member countries and regions that includes Japan, agreed to introduce a total catch limit of 556,000 tons. While lauded by some as a step to sustainably manage stocks, matters like per-country quotas will not be decided until next year, and there remains the issue of the overall limit being higher than recent catches.

Researchers have suggested that stocks have been impacted by rising water temperatures and other changes to the marine environment. Many believe that large hauls are a thing of the past and that the days of enjoying cheap and tasty autumn saury are at an end. (This possibility was underscored on August 27, when the first catch landed at the port of Kesennuma, Miyagi Prefecture, totaled just 8 tons of undersized fish—down from a 65-ton haul on the first day of last year's autumn season.—Ed.)

While demand for seafood is rising worldwide, particularly in China, fish consumption continues to decline in Japan. With the spread of imported frozen and farmed seafood, the seasonal association of certain fish species is disappearing. The decline in Pacific saury stocks provides both the opportunity to devise effective resource management measures and to reconsider Japanese eating habits.