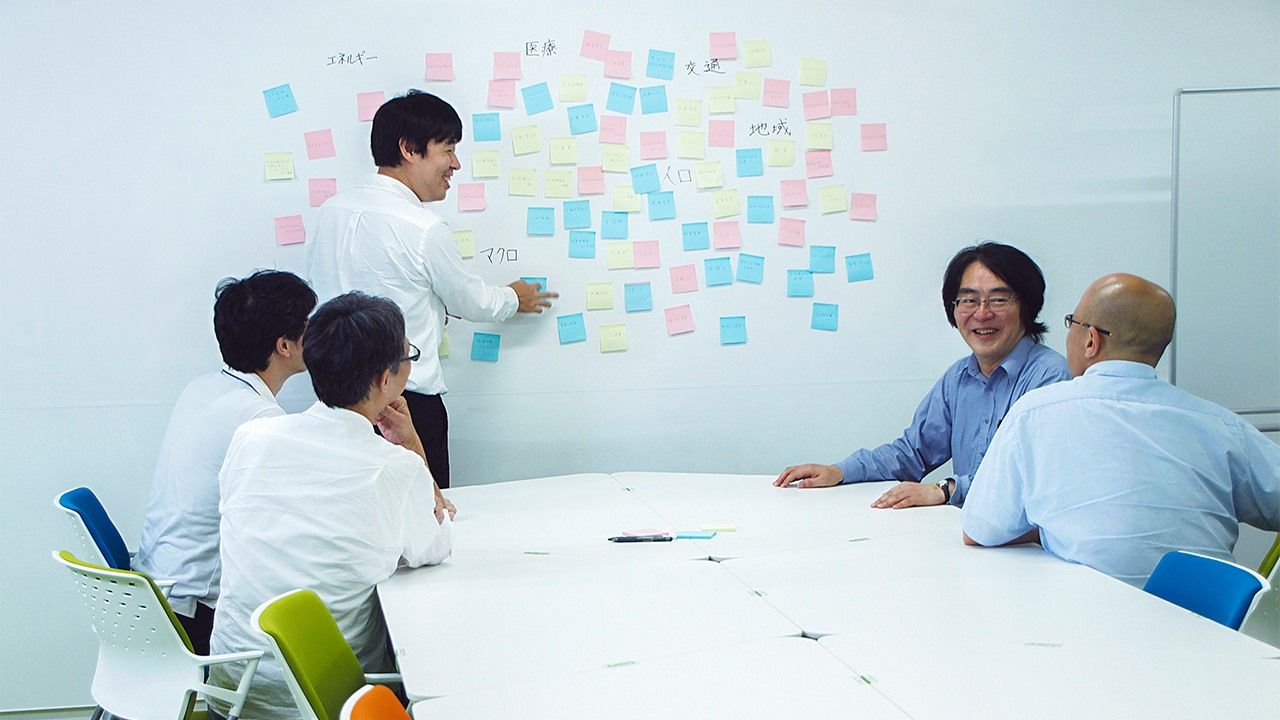 Multipolar Concentration: A Key to Sustainability for Japan

Society Nov 27, 2019
The future of Japan as a sustainable society appears in doubt nowadays, due to the falling population, rising ratio of elderly citizens, and burgeoning public deficits. A researcher who has put artificial intelligence to work exploring better futures shares his scenarios for a more sustainable Japan of tomorrow.

“Will Japan be sustainable in 2050?” Our research group adopted this question as the starting point to conduct simulations of the future of Japanese society, using artificial intelligence to develop policy proposals.

Figure 1 shows Japan’s long-term population trends. The population rose sharply from the start of the Meiji era (1868–1912), peaking in 2008 before switching into decline. If the birthrate remains around the present rate (1.42% in 2018), Japan’s population is expected to fall below 100 million after 2050, and to continue to decline thereafter. The graph looks like a great roller coaster, giving a clear portrayal of the drastic changes to Japan’s population. 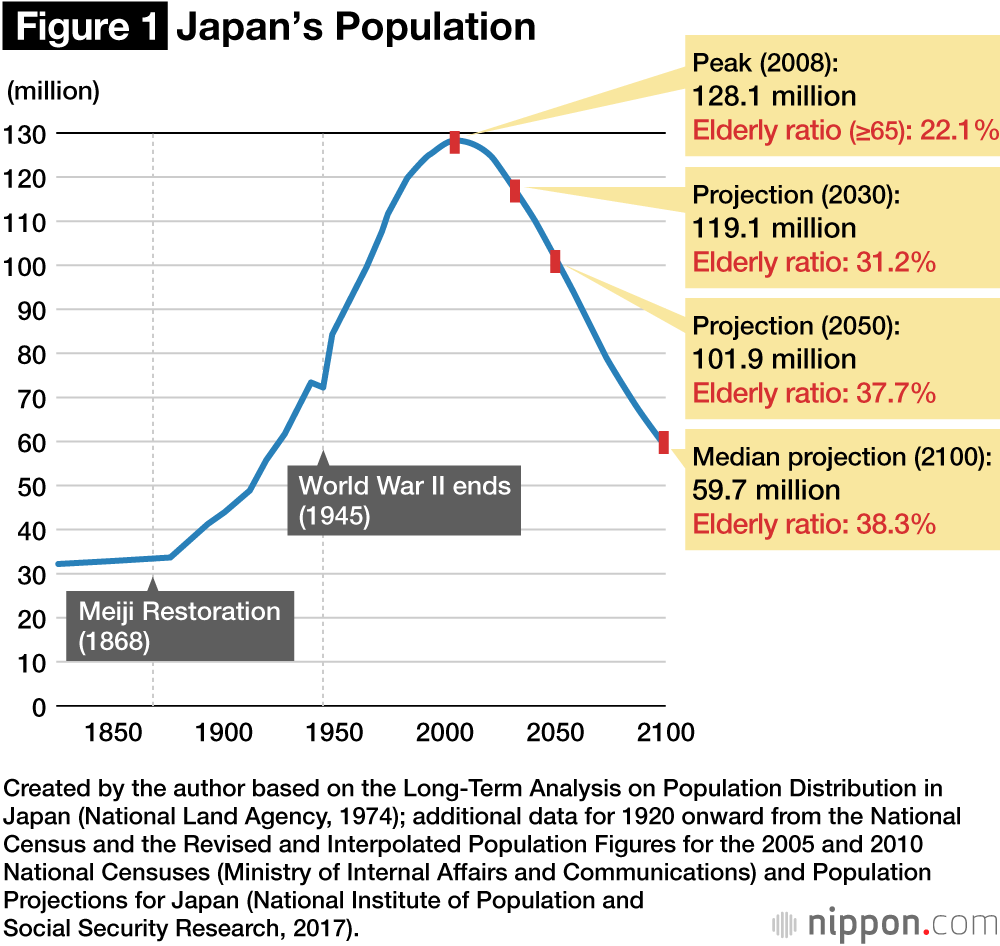 But the population issue is not the only threat to the sustainability of Japanese society. Other challenges include:

In view of these circumstances, the sustainability of Japanese society is in a somewhat precarious state. I was conscious of these issues when I began joint research with the Hitachi Kyoto University Laboratory, established at Kyoto University in 2016. We used AI to conduct simulations of the future of Japanese society in order to develop policy proposals, after which I made a summary presentation in September 2017. (See the Hitachi press release for an overview.)

Specifically, I defined 149 factors that I considered important for Japanese society now and into the future. Then I created a model of cause-and-effect relationships and performed simulations using AI, forecasting 20,000 scenarios for the 35-year period from 2018 until 2052. Eventually, I grouped them into six scenario categories. In defining the categories, I considered sustainability from the four perspectives of population, finance and social security, cities and regions, and environment and resources. In addition, I focused on the four fields of employment, inequality, health, and happiness.

The simulation results produced a clear picture, outlined below.

The AI simulations of Japan’s future provide significant hints to inform our efforts to achieve sustainability for the nation as a whole. There is a radical contrast between urban concentration, in particular the disproportionate concentration in Tokyo, which is symptomatic of this, and regional dispersion. Effectively, this is the most fundamental divergence, or choice, that must be addressed. In some regards, although I was directing the research, this result came as a surprise to me.

I later received many inquiries from government agencies, local governments, and corporations regarding our conception of society and policy proposals developed using AI, and since then I have worked on various joint research projects.

To understand the significance of the divergence between the urban concentration and regional dispersion models demonstrated by the AI simulations, we can divide Japan’s post-war policy development concerning cities, towns and villages into three stages.

The first stage was Japan’s period of high economic growth, from the 1950s until roughly the 1970s, which can be broadly classified as a time of large-scale population movement from farming communities to cities. These years saw the sharpest population decline in farming and other rural areas. During this period, the advancement of industrialization helped Japan to grow and was the core of government policy—or, viewed negatively, policy that abandoned villages. 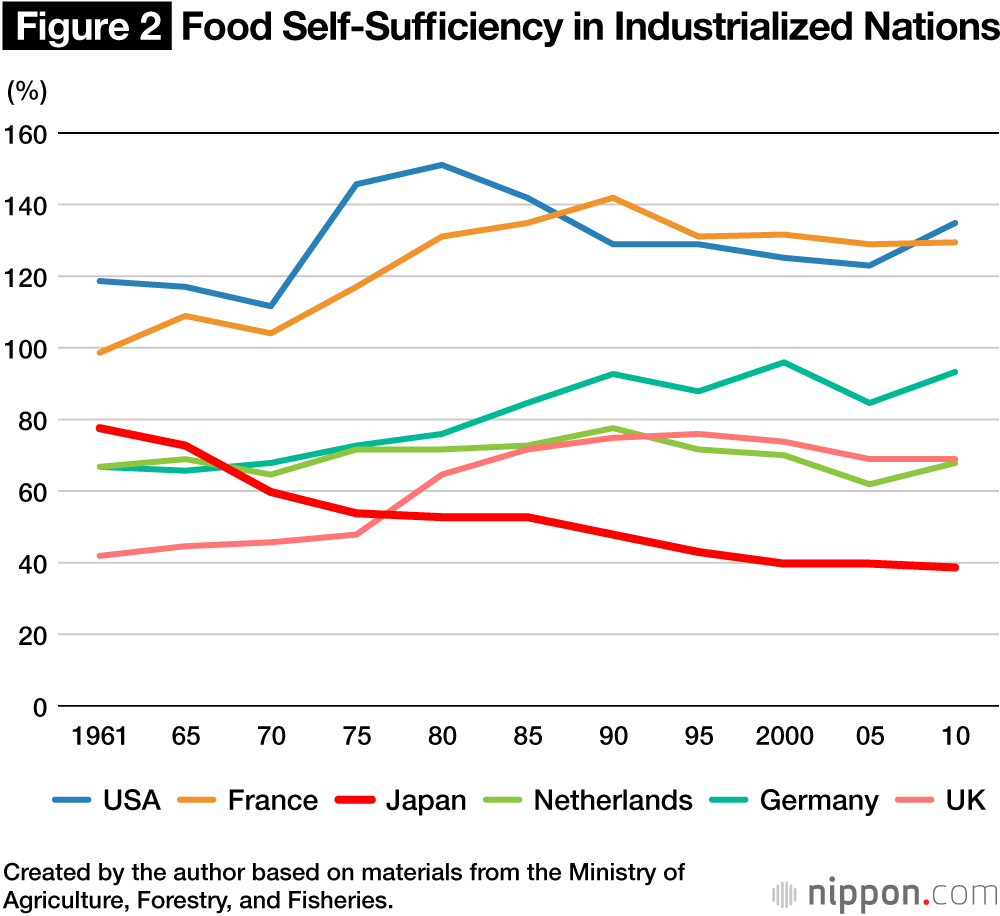 The second stage, roughly from the 1980s to the 2000s, was strongly influenced by the “US model,” with distribution policies of the former Ministry of International Trade and Industry and road infrastructure policies of the former Ministry of Construction pushing a “suburban shopping mall” model in city and regional town planning, intentionally developing a structure centered on cars and roads.

The result has been a hollowing-out of city centers in most of Japan’s small and mid-sized municipalities outside of the main urban centers, characterized by streets of shuttered shops. Policy progressed substantially from the abandonment of villages to the abandonment of towns. Ironically, the present-day desolation of Japan’s midtier cities is not the outcome of failed policies but actually the result of successful national policies. 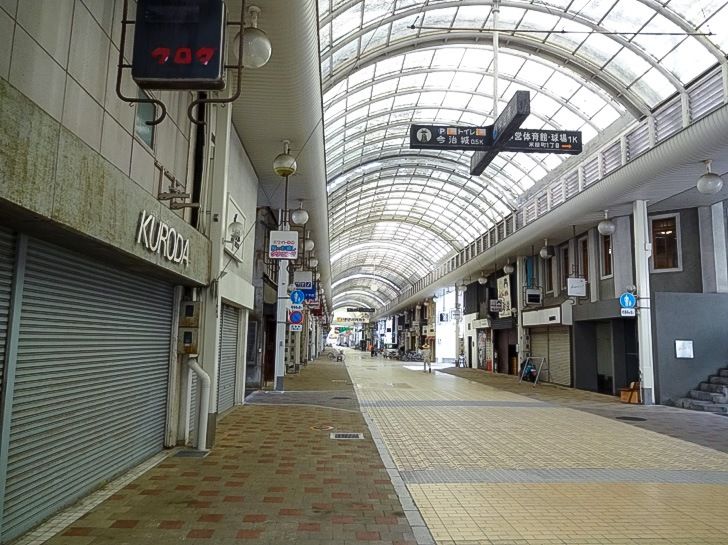 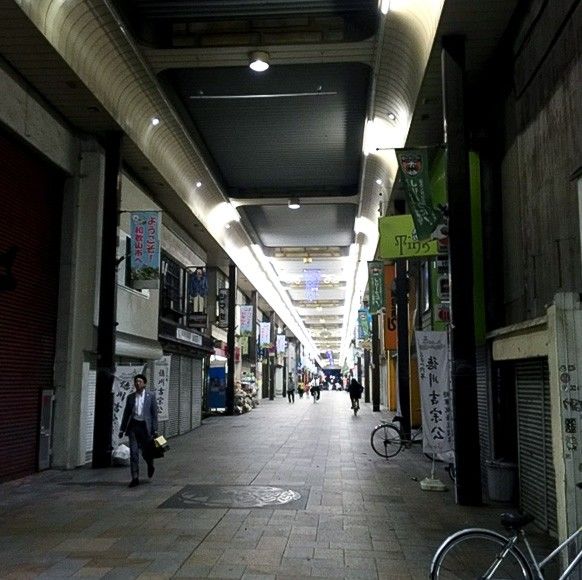 The third stage in my analysis starts in the 2010s and runs through the present. I believe that this era is witnessing a shift from conventional practices to the emergence of a new direction.

Firstly, the aging of Japan’s population is progressing rapidly, driving increased recognition of it as a social problem. A growing segment of the population can no longer drive to distant malls to shop, and some people are now identified as “shopping refugees,” leading to a renewed awareness of the value of local shopping strips. As Japan has transitioned to population decline, the spread of urban areas has created the problem of excessively low population density, and there is now greater recognition of the need for city and regional models that differ from those of the era of population growth.

Amid these changes, we are beginning to see a promising shift in the focus of, for example, policy of the Ministry of Land, Infrastructure, Transport, and Tourism (MLIT). Examples include the reform of three acts on town planning in 2006 and MLIT’s Grand Design of National Spatial Development towards 2050, launched in 2014, with its concept of “small stations” as the basic units of regions.

However, policies such as the so-called Abenomics still have a strong global focus, and consequently, the present can be viewed as a watershed moment for Japan’s cities, towns, and villages.

From Concentration in Few Locations to Many

Lastly, given the current circumstances, I would like to explain the concept of “multipolar concentration.”

In recent years, the population flow to the Tokyo region has become a hot issue, yet regional cities such as Sapporo, Sendai, Hiroshima, and Fukuoka have also experienced considerably high rates of population growth. Among them, cities like Fukuoka actually have higher rates than Tokyo. From 2010 to 2015, Tokyo’s 23 central cities had a population growth rate of 3.7%, in comparison with Sapporo’s 2.1%, Sendai’s 3.5%, Hiroshima’s 1.8%, and Fukuoka’s 5.1%. The present situation is not so much a population concentration in a single location as “multipolar concentration.” Given these circumstances, I believe that Japan is at a crossroads between concentration either in a few locations or in many.

Multipolar concentration is an urban and regional concept that differs from both single-pole concentration and its antithesis, multipolar dispersion. Japan has a large number of cities and regions that act as “poles,” but it will be critical that populations of these poles are as concentrated as possible and that they possess community spaces focused on pedestrians. At an international level, countries like Germany and Denmark have already developed cities and regions in a form that approaches this. I believe that this multipolar concentration mirrors the ideal regional dispersion models demonstrated by our AI simulations.

Various data and the impressions I have gained from students around me demonstrate that, in recent years, Japan’s younger generation has developed a stronger sense of local focus in comparison with people in the previous high-growth era. Nevertheless, enhancing the sustainability of Japanese society will require various forms of redistribution—between cities and rural areas, between centers and regions—as well as coordinated deployment of policy for town planning, public transportation, and youth support.