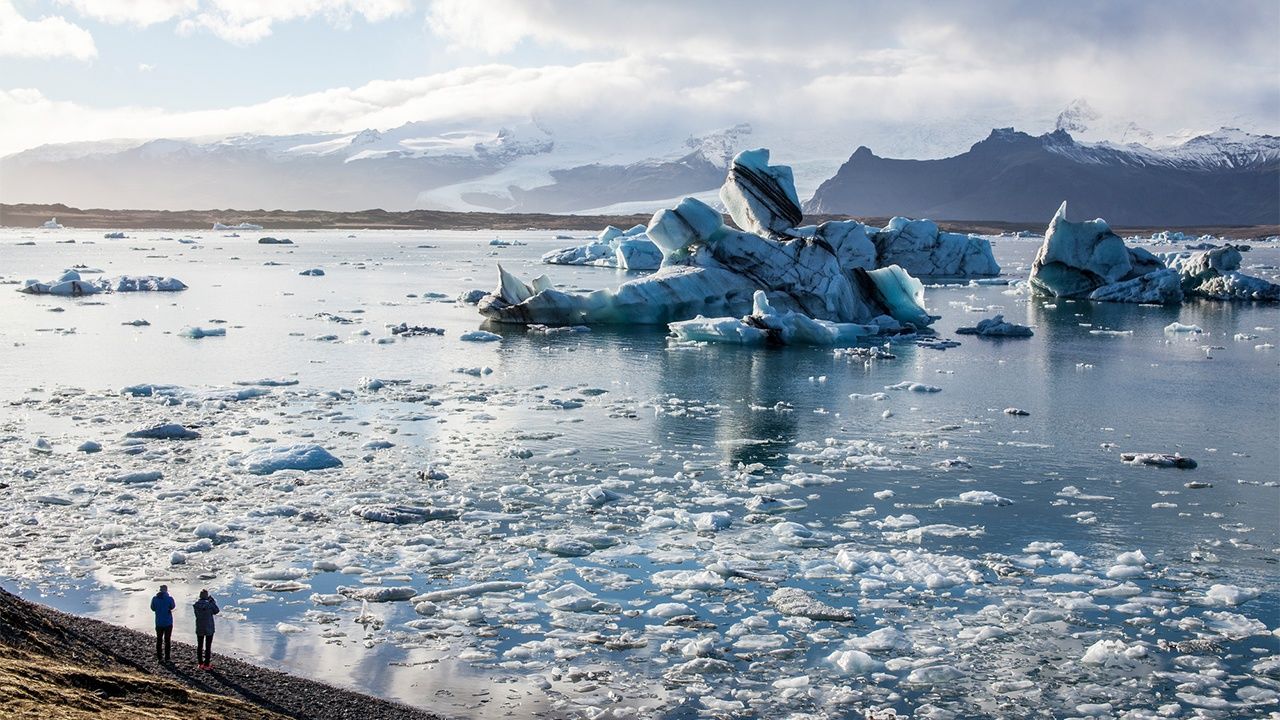 An End in Sight for the Employment Ice Age?

Politics Society Nov 6, 2019
The government has drawn up a three-year plan to support people now in their thirties and forties who missed out on regular employment when companies slashed hiring after the economic bubble burst. The goal is to get 300,000 people in this age group into regular, full-time jobs. The author argues that this approach is too broad-based and that more attention should be paid to individual circumstances.

Are things warming up at last? No, I’m not talking about climate change. The “ice age” I’m referring to concerns Japan’s labor market. New university graduates coming into the job market from 1993 to 2004, when the impact of the burst bubble economy was felt in full, faced what pundits called the “employment ice age.” This had dire effects on many young people, who missed out on jobs as regular employees and have had to make do with unstable contract or dispatch work since then. A sizable number of workers have been disadvantaged in this way, leading to social problems that the government has now recognized need tackling.

Getting the “Right” Job

The Japanese labor market is often described as being dual-structured, typically consisting of the winners, usually large corporations, and “the rest of the pack,” small and medium-size enterprises and other firms. Given that job-hopping is not the norm in Japan, many labor experts believe that this difference between companies translates directly into lifelong differences between workers, affecting not only salary levels but also opportunities for work-related experience while they are young. In other words, those who are unlucky and fail to get the “right job” out of the starting gate, simply because they graduated from university in an economic trough, suffer from that throughout their careers. They are permanently at a disadvantage, through no fault of their own or deficiencies in their abilities.

Where the dearth of good jobs is concerned, government reports and other sources tend to focus on the cohort of workers who graduated from 1993 to 2004. But in fact, graduates hitting the labor market in the roughly 15-year period beginning in the mid-1990s, when the economy was performing poorly, also had less opportunity to land good first jobs. Those people are now in their thirties and forties. 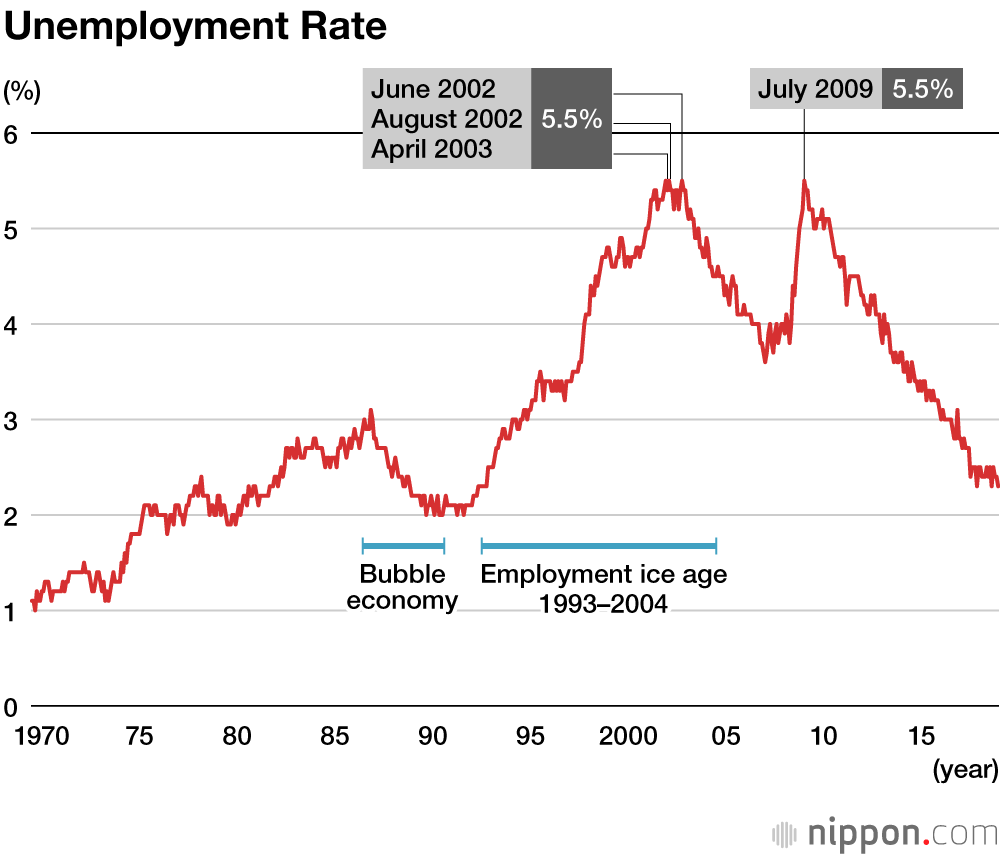 Support for Those Left Behind

In May 2019, the government unveiled a support program for the ice age cohort that aims to place 300,000 of them in full-time employment over the next three years. The program consists of three main approaches: career counseling at Hello Work public employment offices; recurrent education to retrain in the most advanced technologies and obtain certification in various fields; and subsidies for employers offering jobs to those in the program. But these steps are similar to traditional measures for supporting the unemployed.

The program’s three components have always been part of support offered to the jobless within the employment insurance scheme, which is designed to help people who were employed but who, for one reason or another, lost their jobs. In Japan, employment insurance is funded by contributions from both employers and employees. The pooled contributions fund temporary benefits for the jobless to support themselves while they are unemployed and assume that benefit recipients will spend the better part of their time job-hunting, mainly at Hello Work.

In other words, the scheme is not designed for those who may, for example, have left the labor market for a prolonged period to raise a family or for those who have never held a job to begin with. Since such individuals made few or no contributions to the employment insurance scheme, using the pooled funds to support them temporarily is not feasible. Moreover, many of these people are working at poorly paid daytime jobs and have no time to go to Hello Work offices, which are usually only open during business hours. It’s also often difficult for them to get to a Hello Work office in person to access support, which is not made available via telephone or email.

The new program, however, differs from past employment policies and takes a new tack in the sense that it links up with agencies supporting those who are having trouble making ends meet. Those agencies are part of the framework of the livelihood assistance program and other social welfare polices and are thus not dependent on the insurance-based system for funding.

Unlike Hello Work, which waits for users to come to an office, those agencies build relationships with clients in various ways, from roving consultations and home visits to telephone outreach services. In the case of individuals who became socially isolated because they were unable to get on the job escalator as new graduates, the authorities must realize that they need to reach out to clients rather than waiting for them to ask for help. New approaches that go beyond traditional employment policies are needed to support the employment ice age cohort.

The new program is a step in the right direction, but it’s important to understand that some people are in even worse straits than those conventionally thought to belong to the ice age generation.

For nearly 20 years, Genda Yūji and other labor researchers have been talking about the “résumé effect,” the phenomenon whereby workers are permanently disadvantaged if they graduated and started job-hunting in unfavorable labor market conditions. Genda, together with Kondō Ayako and Ōta Sōichi, recently published research(*1) that conclusively proves that this effect is real. Discussing the job uptake rate, they say that in Japan, the unemployment rate prevailing when males graduate from high school has long-term negative effects. Specifically, for every percentage point increase in the unemployment rate at the time they graduate, the job uptake rate among that cohort continues to be 3–4 percentage points lower for more than 12 years.

This résumé effect is strong even compared to the United States. For example, assuming a 3 percentage point increase in the unemployment rate after the Japanese bubble burst, the job uptake rate among male high school graduates in those years was 9–12 percentage points lower than it would have been in a more favorable job environment. Given that it takes a full decade for the labor force participation rate among women aged 30–34 to recover (the so-called “M-curve effect,” with twin peaks of the M corresponding to their employment before childbirth and their return to the workforce after raising their young children), a drop exceeding 10 points is quite large. The researchers uncovered similar negative effects on working hours and annual income, meaning that male high school graduates entering the labor market during the ice age years were probably still at a disadvantage even 10 years after graduating. For them, the ice age is nowhere near warming up.

A Sellers’ Market for University Graduates

The labor market for high school students, on the other hand, is more systematic, since schools are directly involved in finding jobs for their graduates, who aren’t spending the last two years of their school career job hunting. People don’t often connect the employment ice age with high school graduates, but it is this group that has suffered disproportionately. Meanwhile, the research of Genda and his colleagues uncovered no such sustained negative repercussions for university graduates, and there has been no proven résumé effect for that group.

In other words, male university students who had to join the labor market in the ice age years suffered no permanent damage. Even by conservative estimates, after a certain number of years their income, career advancement, and so forth are comparable, on average, to those of preceding and following cohorts. In other words, for them, the glaciers melted.

If the results of this empirical study are taken at face value, there is little point in thinking that university graduates are representative of the employment ice age generation. The true picture is that individuals in their thirties and forties who are still jobless or have been out of the labor market for a longer term due to personal circumstances, rather than being part of a homogenous group affected by circumstances beyond their control, are the ones who need help.

But because Hello Work is part and parcel of the employment insurance system, it is not used to customizing its services—which are geared to the average job seeker with previous job experience—to accommodate those with more specific needs. It lacks the flexibility necessary for dealing with the minority of people who have had ups and downs in life.

If that is the case, Hello Work should seek input from social-welfare-related entities, which have experience dealing with the down and out. People who have fallen through the cracks of the employment system need personalized attention and support, so it is not necessary to focus solely on the cohort affected by the employment ice age. The government’s program should instead concentrate on implementing support measures for people who have trouble finding jobs, whatever generation they belong to. They were frozen out, and there are no signs of a thaw setting in yet.