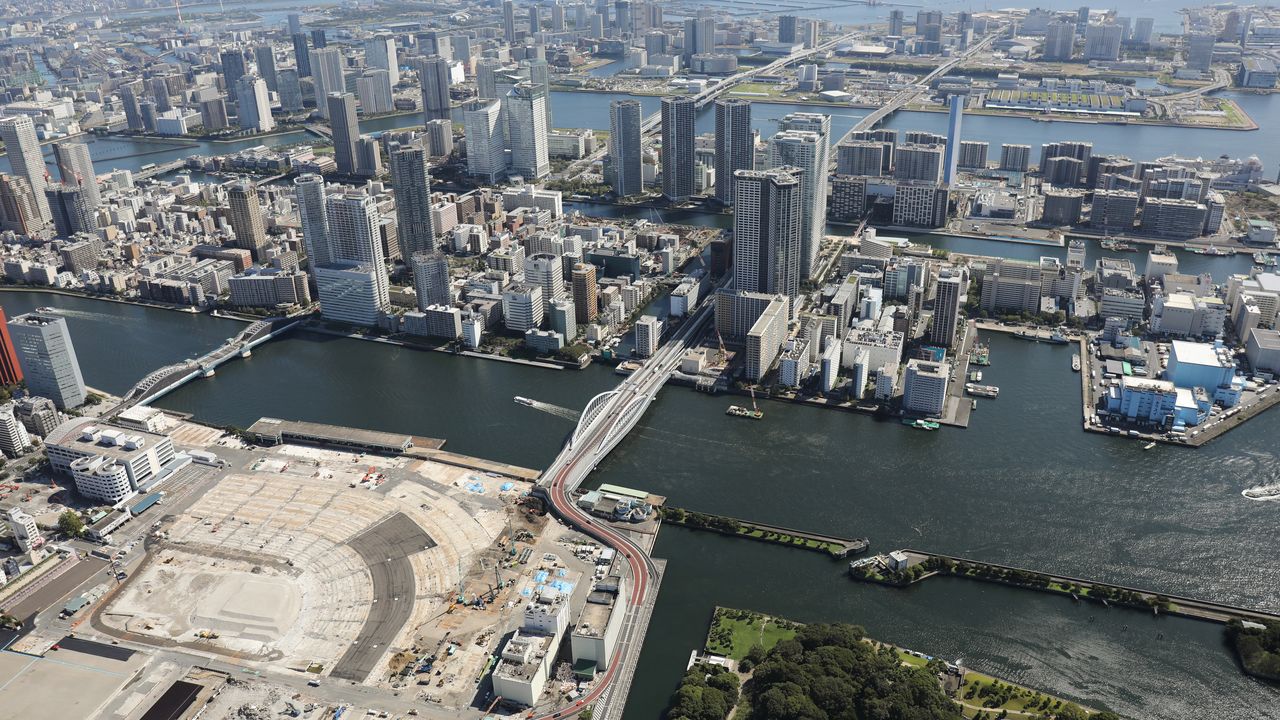 Economy Dec 19, 2019
A full year has passed since the October 2018 relocation of the old Tsukiji Fish Market in Chūō, Tokyo, to the Toyosu Market in Kōtō. Operations appear to be going smoothly at the new site of “Japan’s kitchen,” and the market enjoys growing popularity. Wholesalers struggle, however, with low volumes of seasonal fish as catches continue to decline.

Safety Issues No Longer a Concern

“Right now, the Toyosu Market is functioning well. And so long as nothing unforeseen happens, we believe it is safe and secure,” says Kuronuma Yasushi, appointed director of the central wholesale market in July 2019. Updates on measures to contain possible pollution by groundwater will continue to be made public, he says, to buttress public confidence in the market.

Plans to open the Toyosu Market hit a snag when safety concerns compelled Koike Yuriko, who had just been appointed Tokyo’s governor in August 2016, to put the opening on hold. Toyosu was located on the site of a former gas plant, and soil pollution caused by seeping groundwater was a serious issue. After postponing the market opening, the Tokyo metropolitan government worked frantically to contain the pollution by laying down new concrete flooring and reinforcing ventilation systems, among other measures. Only after experts had confirmed the safety of the site was national government approval given in September 2018 to move the old fish market in Tsukiji to the new facilities.

The grand opening on October 11, 2018, was initially followed by traffic jams on access roads and accidents caused by specially designed turret trucks inside the new marketplace, but it did not take long for things to settle down and business has been relatively good since then. At the first fish auction for the year held on January 5, 2019, the new Toyosu Market got off to an auspicious start with the sale of a bluefin tuna from Ōma in Aomori Prefecture for a record price of more than ¥300 million. 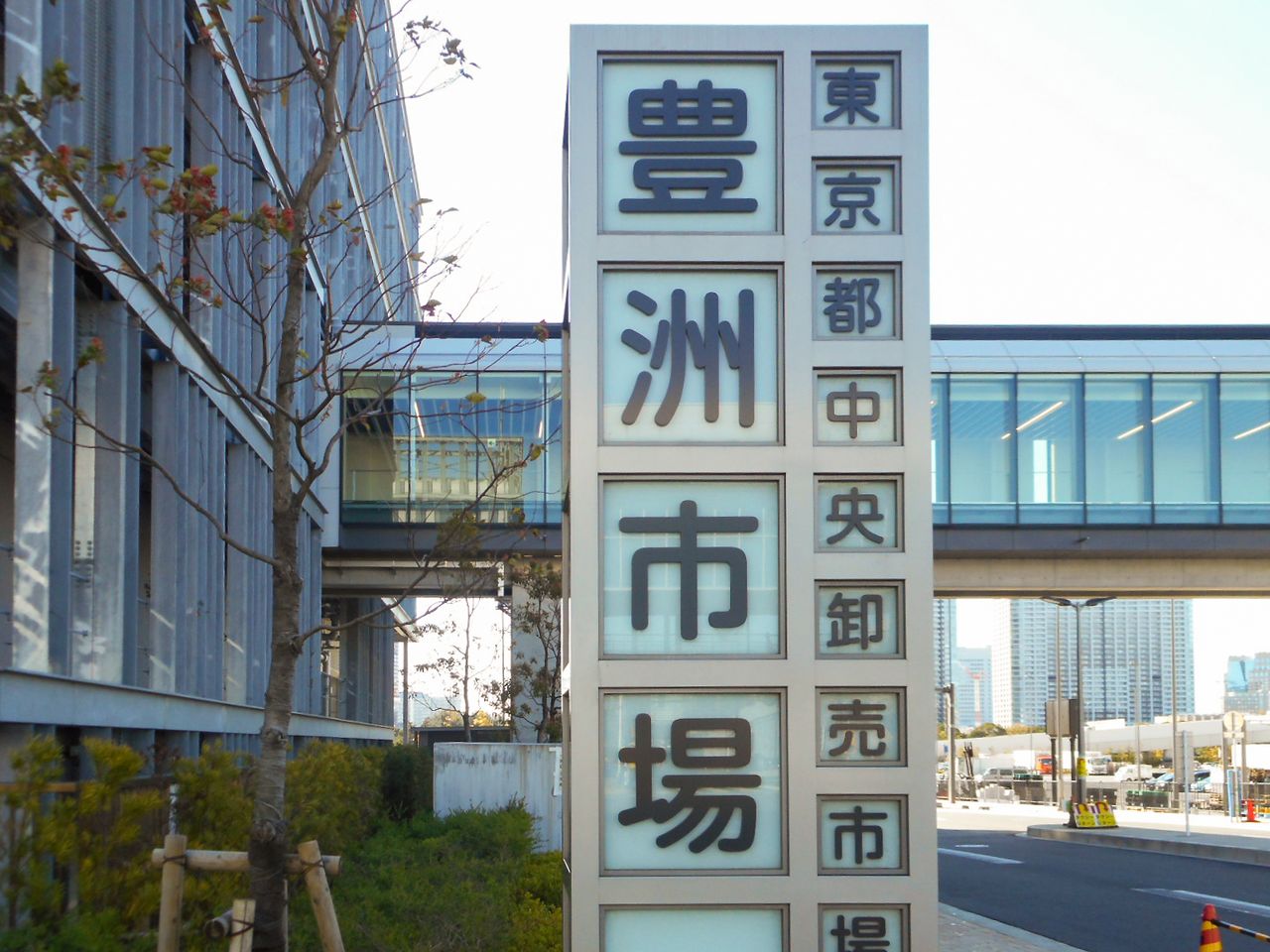 Toyosu Market’s problems are becoming more evident one year after its opening.

A staggering ¥600 billion has been invested in the Toyosu Market, whose state-of-the-art facilities are nearly twice as large as those of the old Tsukiji market. A closed, self-contained facility, Toyosu boasts excellent hygiene and temperature management controls. Prior to the move from Tsukiji, the Tokyo metropolitan government anticipated a burgeoning market and announced that it was aiming for 620,000 tons in marine product transaction volume by 2023, an objective considerably higher than the actual level of transactions seen in recent years.

Back in the latter half of the 1990s, when the idea of moving the wholesale fish market was first proposed, Tsukiji had an annual transaction volume of more than 700,000 tons, but the site was viewed as too old and cramped to continue handling such a volume. Many of the wholesale vendors and others supported the move to Toyosu.

In the years that followed, though, transaction volume at Tsukiji started to decline—and lack of space was not the only reason. For one thing, an increasing number of transactions were taking place outside of official marketplaces as consumers placed their orders directly with producers and through the Internet. There was also the fact that fisheries throughout the country were bringing in less volume as the Japanese turned away from fish and fish products to eat more meat. Even before the move was made, there were some experts who questioned whether the move to a larger marketplace was really necessary.

Missed Targets Due to Low Catches

Nevertheless, the move was made, and as the initial fear that harmful rumors might hinder business proved unfounded, there was hope that an increase in transactions would make up for the rocky start of the new marketplace. Unfortunately, even after the move to Toyosu, the decline in transaction volume that was already underway at Tsukiji has continued unabated. According to the Tokyo government, transaction volume at Toyosu for January through August 2019 totaled around 220,000 tons, slightly less than that at Tsukiji for the same period of the preceding year. There are still a few years until the target year of 2023, but if the current trend continues, annual transaction volume is estimated to be just half of what was originally projected.

The decline in fish deliveries to Toyosu is due to unexpectedly poor seasonal catches. According to wholesalers, the saury catch this season was exceptionally small and the delivery to Toyosu from Hokkaidō and other areas usually noted for their abundant saury stock is only around 20% of what it was last year. 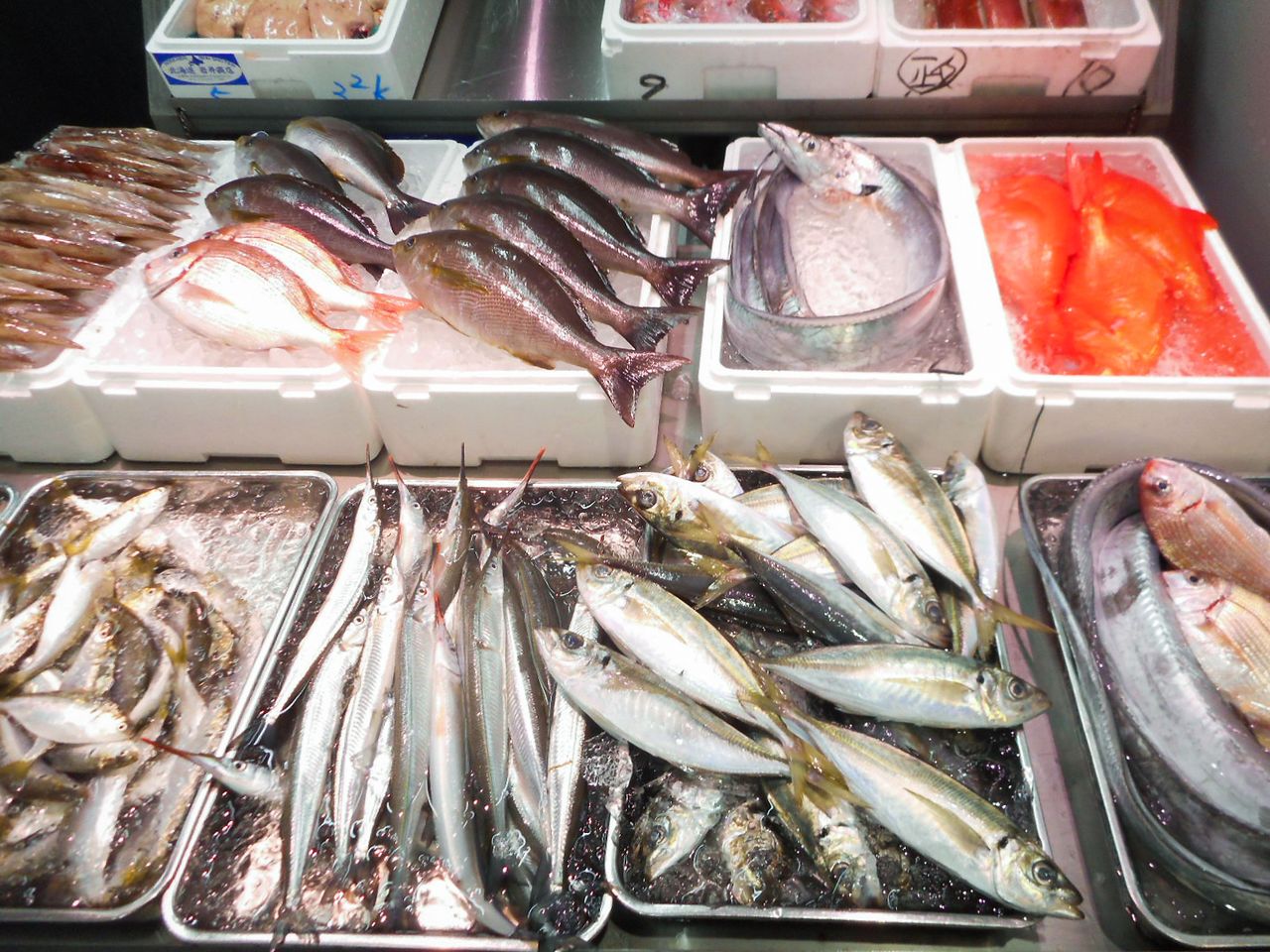 Business is going well, but the volume of fish remains lower than expected at the Toyosu Fisheries Intermediate Wholesale Market.

The reasons are not clear, but foreign vessels harvesting the fish before they enter Japanese waters and rising sea temperatures due to climate change are considered to be factors in the diminishing of saury stocks. The downward trend can be seen for many other types of fish as well, such as autumn salmon and the Japanese common squid. Wholesalers and buyers from fish shops and eateries complain with disappointment that they cannot find the high-quality fish they seek.

Additionally, in recent years there has been a downward trend in the sales of raw bonito (katsuo, or skipjack tuna) as consumers avoid the delicacy for fear of infection by Anisakis, a parasite found in raw fish. The early and late season bonito that were traditionally prized are also not selling as well as they used to, and Toyosu wholesalers and retailers are finding it difficult to profit from such seasonal fish. 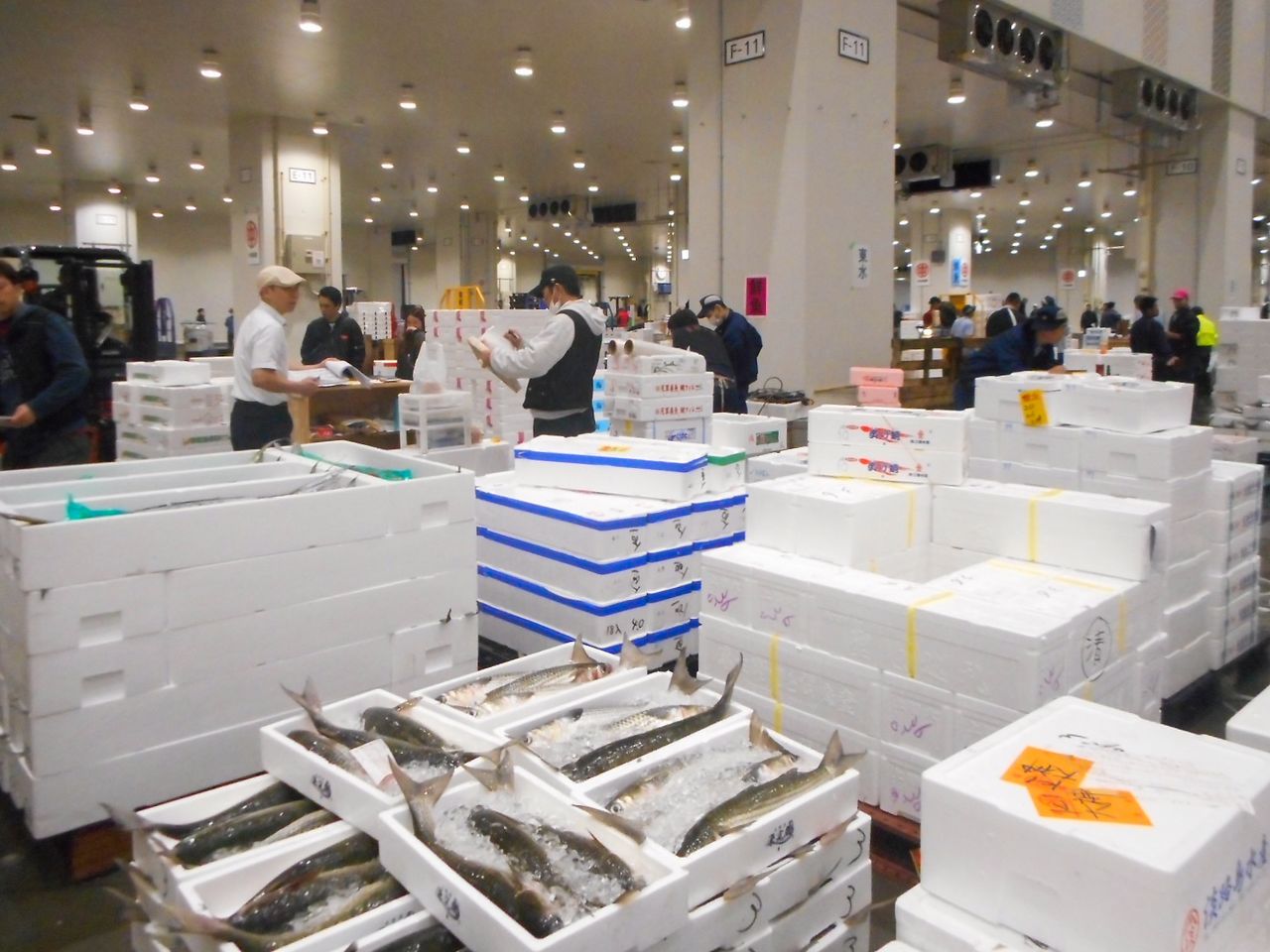 Seasonal fish are not drawing customers the way they used to. 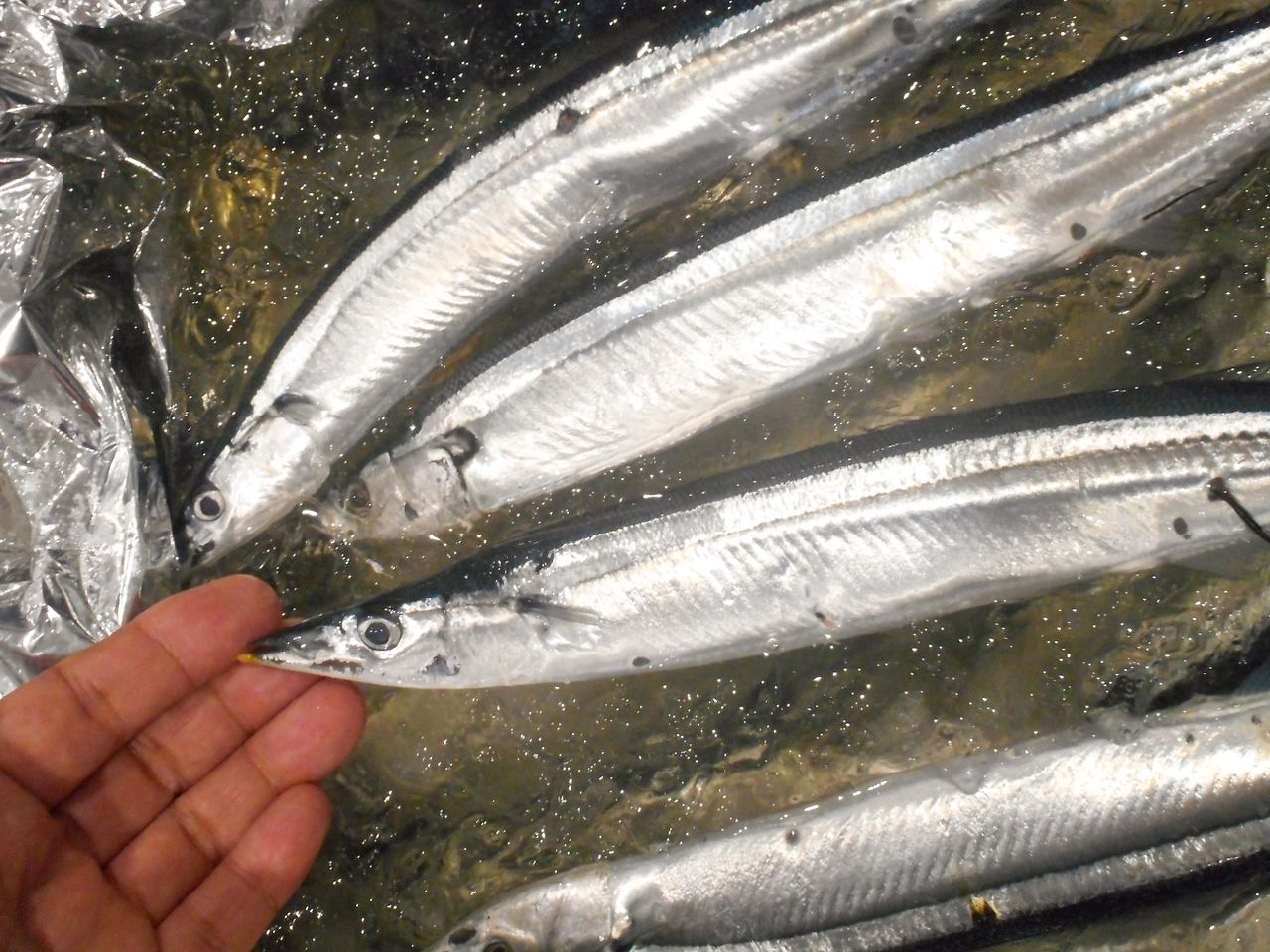 Saury catches are among the smallest they have been in several years.

Focus on Quality over Quantity

Wholesalers are starting to assert that it is more important right now to focus on quality and meeting customers’ needs rather than trying to increase quantity. With the approach of the Tokyo Olympics and Paralympics, some wholesalers say they want to promote Toyosu fish to overseas customers and are seeking to join forces to invigorate the market.

Though wholesalers are struggling, Toyosu has managed to secure a strong customer base among the general public. The Fisheries Intermediate Wholesale Market and the restaurant area in the neighboring building with nearly 40 eateries, including several sushi shops, teem with avid shoppers and customers. Sushidai, a popular sushi shop relocated from Tsukiji, regularly has lines of customers waiting two to three hours to get in.

Another attraction open to the general public is the fourth floor of the Fisheries Intermediate Wholesale market where customers can browse through shops selling professional-grade cooking utensils and equipment as well as a wide range of processed foods that are a staple in the Japanese diet such as dried bonito flakes and seaweed. 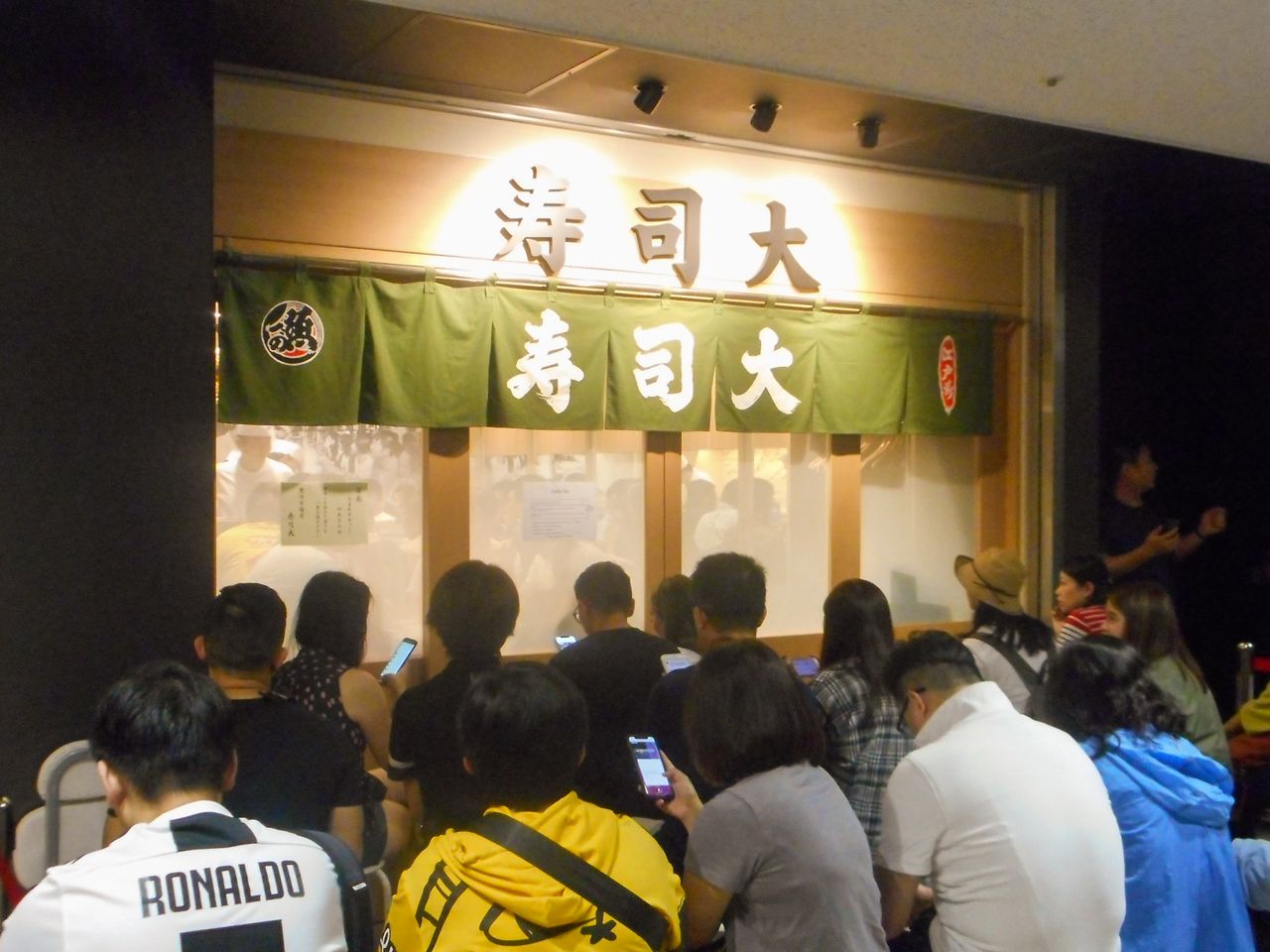 Always the most popular sushi shop in Tsukiji, Sushidai continues to draw crowds after relocating to Toyosu.

A popular destination for tourists in the early morning hours is the observation deck on the second floor of the Fisheries Wholesale Market, where they can watch the tuna auctions on the floor below. Until recently, it was not possible to hear the sounds of the auction through the glass windows of the observation deck, but since October 5 this year, the ring of the auction’s opening bell and the cadence of the auctioneers’ chants can be heard through a loudspeaker, providing a more exciting and direct experience. The observation deck offers a safe viewpoint compared to the old Tsukiji market, where tourists often caused problems by walking right onto the auction floor. Groups of schoolchildren brought to see the auction are becoming a common sight, more than doubling the number of daily visitors to the facility. 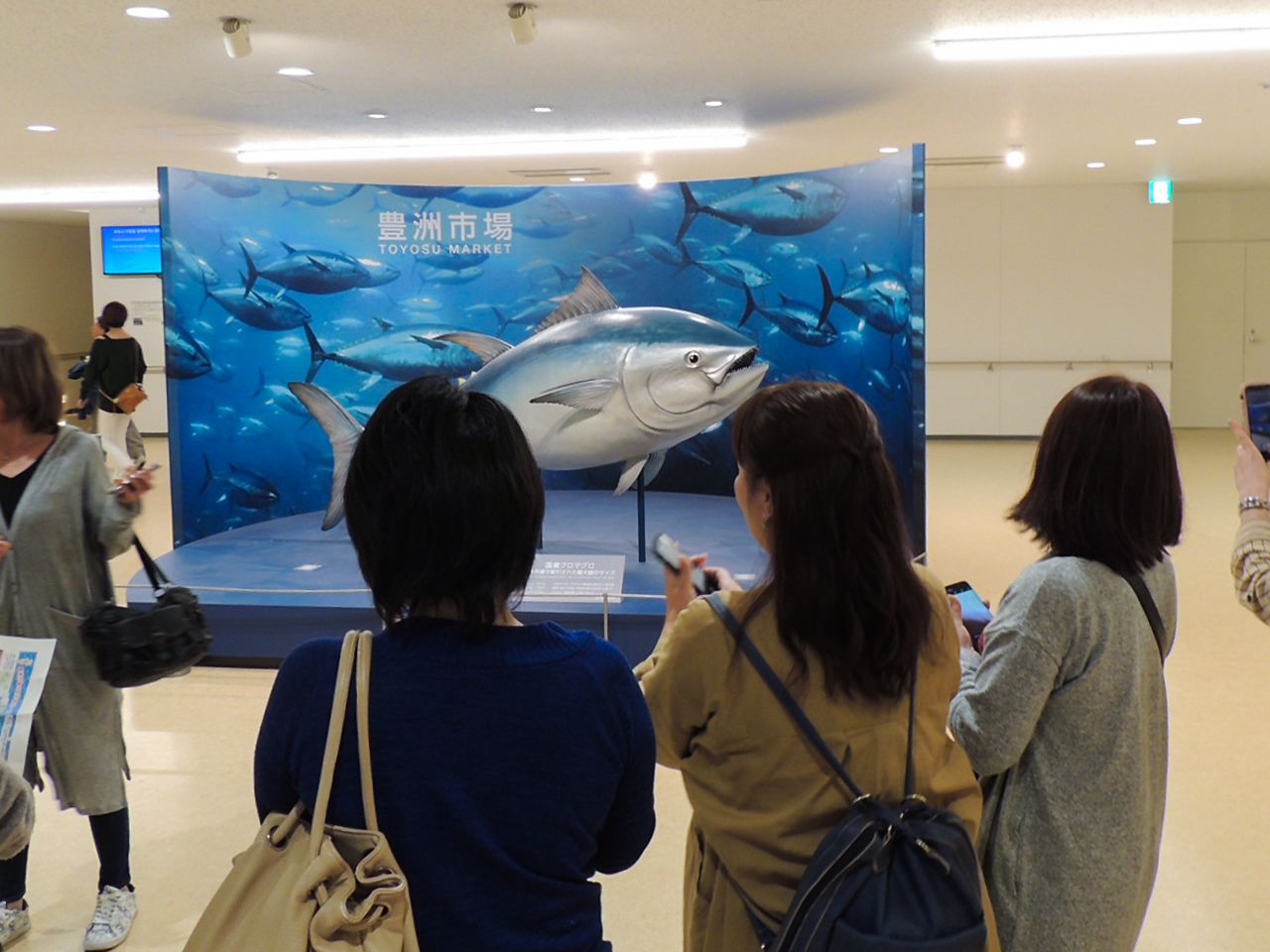 The giant tuna replica at the entrance to Toyosu’s Fisheries Wholesale Market building is a scale model of a 496-kilogram bluefin tuna, the largest ever sold at the old Tsukiji Fish Market.

Opening Up to the General Public

Market authorities and wholesalers are currently considering how they may respond to calls from the local Kōtō government and others to open up the Toyosu Fisheries Wholesale Market to the general public. Some of the fisheries wholesalers would like to be able to sell directly to consumers as they once did at Tsukiji, but there is still strong resistance from others who insist the market should be restricted to wholesale activities among professionals.

There are suggestions that designated parts of the market could be opened up to the general public at specified times, but safety issues remain a major concern. The Tokyo metropolitan government is currently considering the possibilities for opening up the market to year-end shoppers.

(Originally published in Japanese. Banner photo: Site of dismantled former Tsukiji Fish Market in the foreground with the new Toyosu Market visible in the background to the right. © Jiji Press. All other photos © the author.)