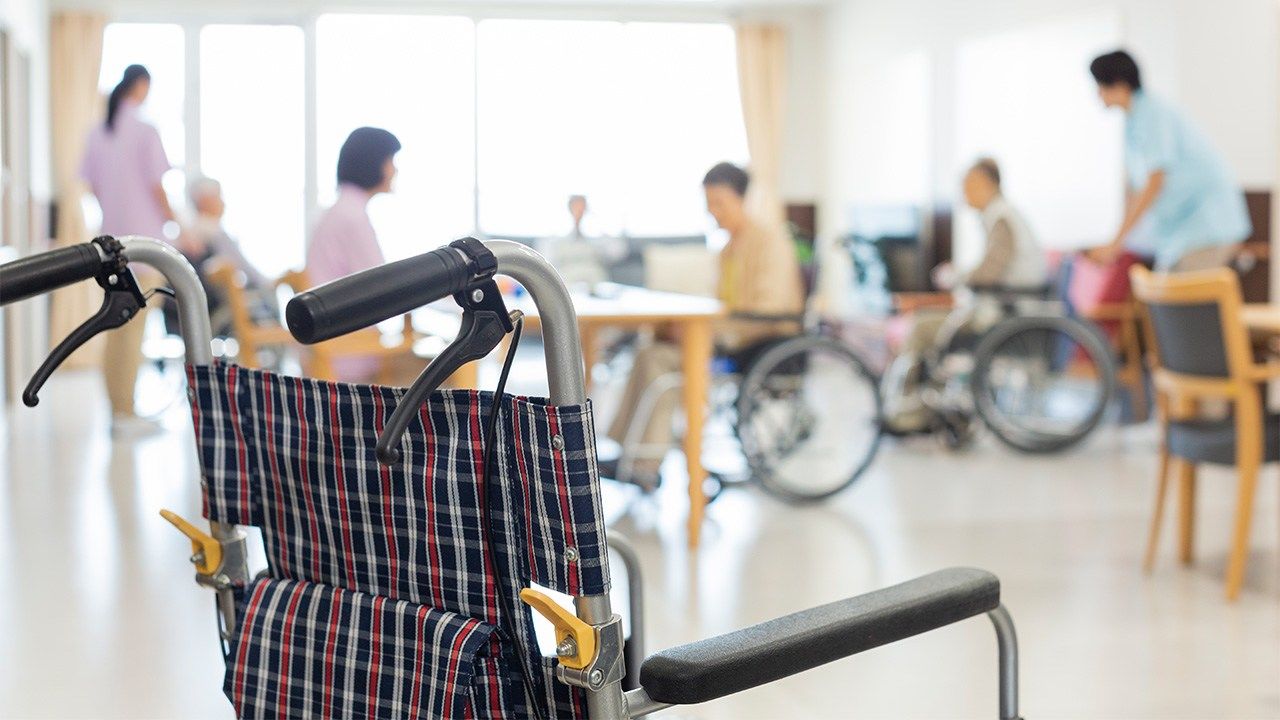 Society Work Feb 5, 2020
Long-term care has a negative image in Japan as a strenuous job that pays comparatively little. Worker turnover is high and care facilities are chronically short-handed. In today’s rapidly aging society, what can be done to improve conditions?

Japanese society is aging at an unprecedented rate. Data collected by the Ministry of Health, Labor, and Welfare indicates that the number of people certified as requiring some type of long-term care or support is growing year by year. In fiscal 2017, this figure stood at 6.3 million, fully 18% of the country’s 35.8 million people over the age of 65. 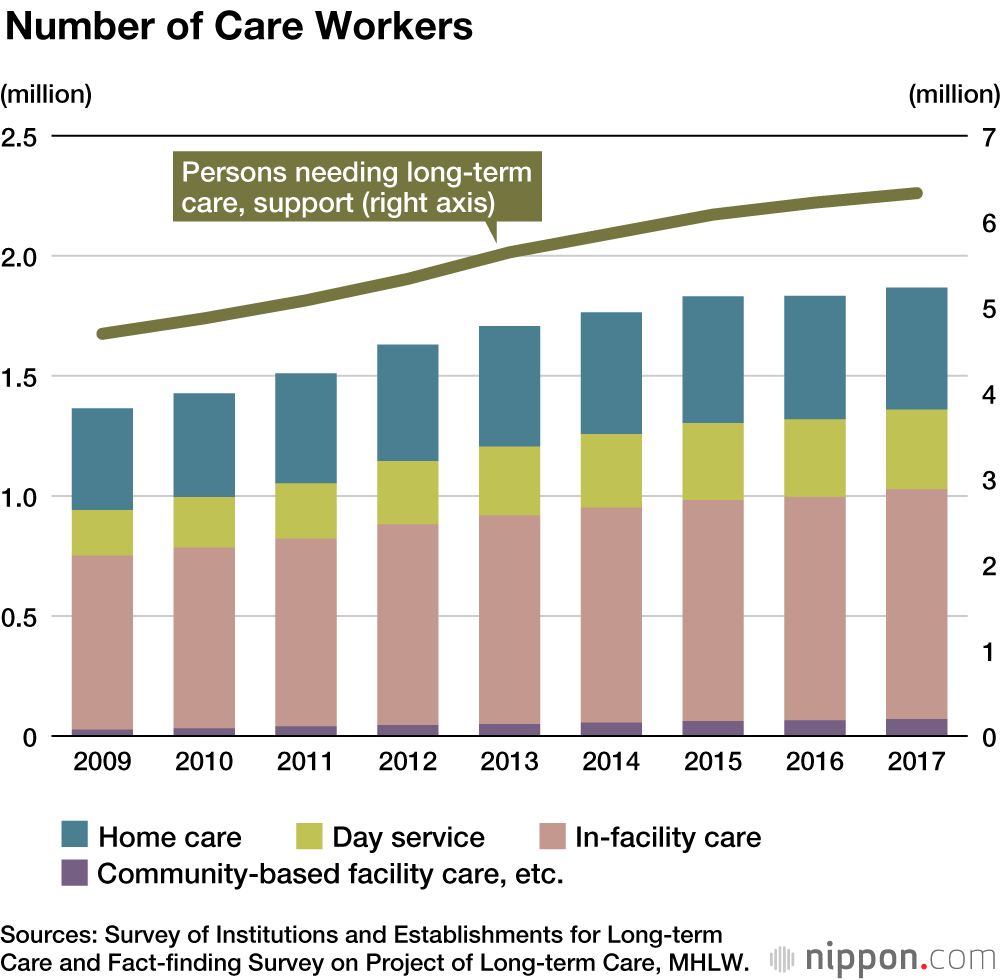 The postwar baby boomers, people born in 1947–49, represent a significant bulge in Japan’s population pyramid. In 2035, those people, now in their early seventies, will have reached their mid-eighties. According to current data, whereas only 14% of people in the 75–79 age group require long-term care, the figure jumps to around 50% of those aged 85–89. It is clear that Japan will have to look after a burgeoning number of aged people in the decades to come.

Any discussion of social security issues inevitably focuses on where the money for expanded services will come from. Services provided under long-term care insurance are publicly provided, to be sure, but the issue of the balance between subscriber contributions and services provided always provokes major debate. Even so, assuming that the necessary funding is available, not everyone needing long-term care will necessarily be able to receive services, because the number of care workers is well below that needed for providing the said services. There were some 1.9 million care workers in front-line positions in fiscal 2016, but according to MHLW projections, if the growth curve for population aging continues along its current trajectory, by the end of fiscal 2025 around 550,000 additional care workers will be needed. It will be difficult to secure that many care workers in just five years, given that the population is shrinking due to the country’s low birth rate. 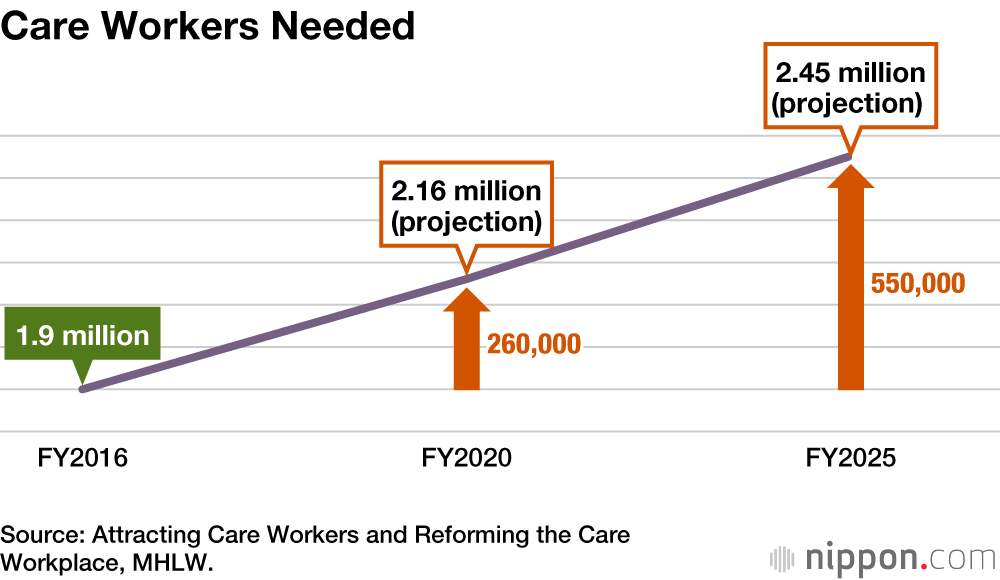 In fiscal 2018, the jobs-to-applicants ratio for long-term care positions stood at 3.95, much higher than the 1.46 figure for all industries. However, the 1.46 ratio is also high, and the unemployment rate, 2.4%, is at its lowest since 1993. The job situation is similar to the years around 1990 in Japan’s “bubble” economy days. In other words, labor is in short supply throughout the country, and the dearth of long-term care workers is bound to accelerate. 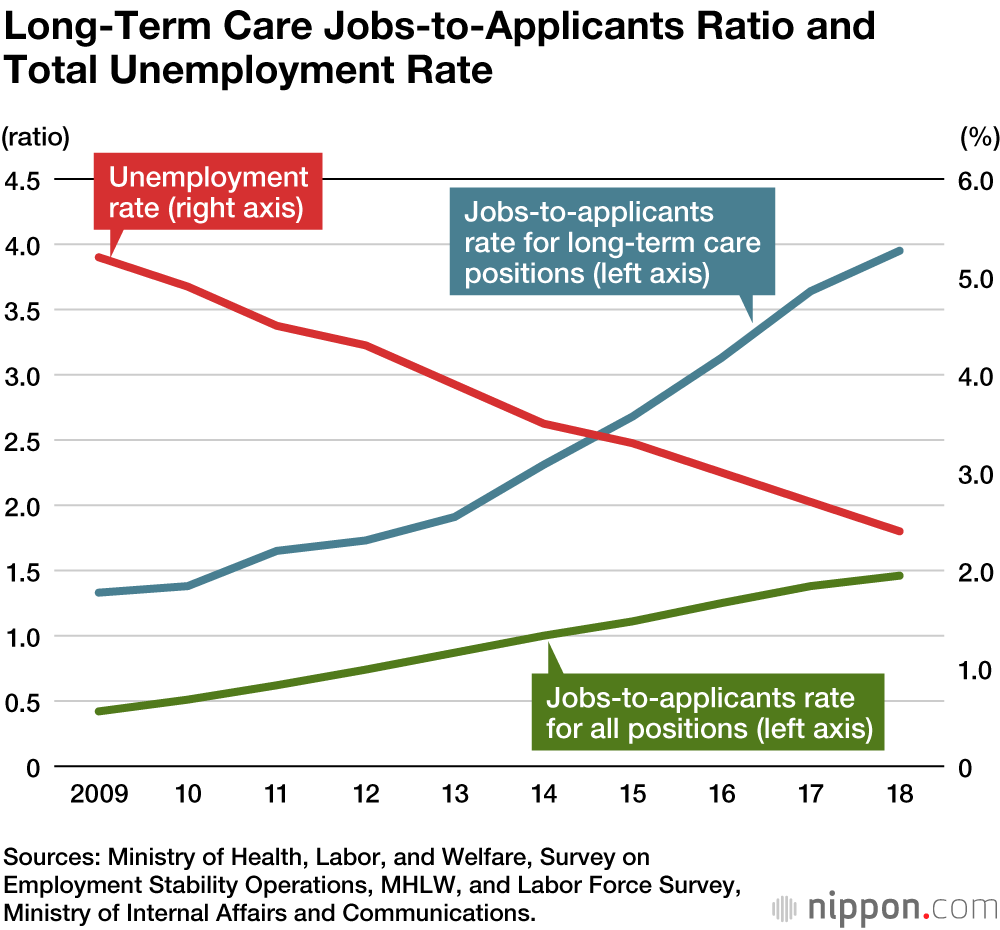 Long-term care is a tough job, with irregular hours such as night shifts and the stress of dealing with aged patients or those suffering from dementia. Even so, salaries are relatively low, and due to chronic understaffing, workers often cannot even take the paid holidays they are entitled to. Even though long-term care is subsidized by the government, long-term care workers actually earn around ¥1 million less per year compared to salary levels across all industries. But low pay is not the only reason people shy away from working in long-term care; the work environment is another factor. According to a survey by the Care Work Foundation that allowed multiple responses, the foremost reason for quitting caregiving is interpersonal relations; salary is not the primary consideration. A good share of care workers also express dissatisfaction with their employer’s or facility’s philosophy or management approach. 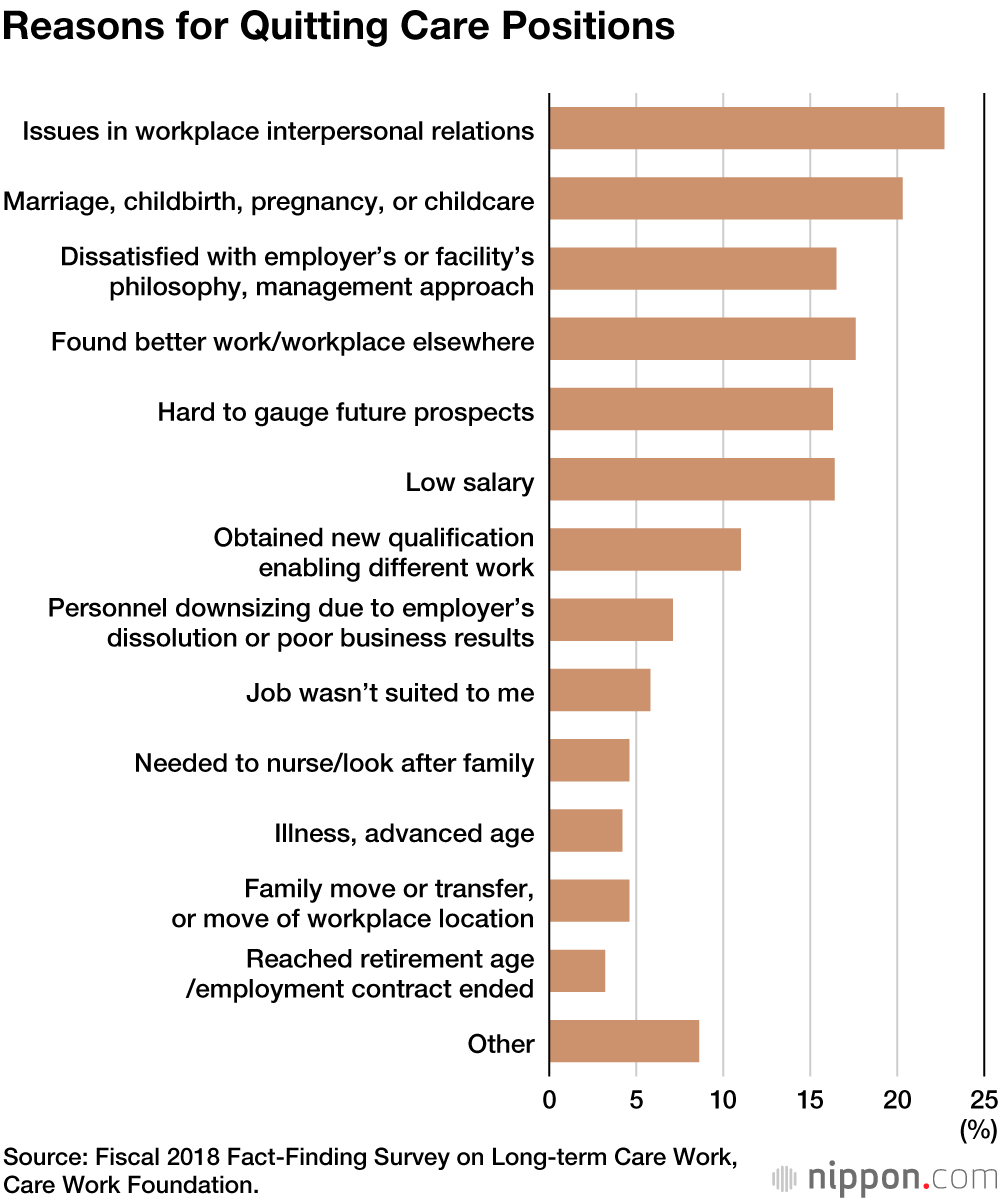 This survey’s results reveal that people taking jobs in long-term care are not motivated primarily by high salaries. They place more importance on doing meaningful work; they also tend to seek workplaces that are easy to work in and involve little stress due to interpersonal relations with coworkers. Individuals who work in the social welfare field tend to want to work with congenial colleagues to assist those who need help. That is why staff turnover is high when workplace interpersonal relations are poor, a fact that managerial staff in long-term care institutions with poor working conditions seem to be insufficiently aware of Issues like sexual and power harassment are also beginning to emerge, as they already have in other industries, making care work all the less appealing. For these and other reasons, staff turnover is higher in long-term care compared to all industries, with over 60% of workers quitting after less than three years on the job.

The long-term care industry is pinning its hopes on foreign labor, with many service operators fanning out across Southeast Asia to recruit personnel to work in Japanese care facilities. Municipalities are also keen to attract workers from abroad, offering subsidies and various other incentives. I am basically in favor of hiring foreign workers to work as care workers in Japan, but I believe that this does not present a simple solution to the issue of the shortage of domestic care workers.

There are some large facilities with specialized staff who act as job coaches for foreign workers, helping and guiding them as they learn the ropes. But the majority of facilities are short-handed as it is and do not have the leeway to hire full-time trainers. The end result is that ordinary care workers are often expected to coach their non-Japanese coworkers. This can be difficult when the foreign workers are not so proficient in Japanese, leading to language-based misunderstandings when they are given instructions using unfamiliar vocabulary and, ultimately, to more work for the Japanese staff.

Hiring foreign workers allows operators to meet their staffing levels so they are in compliance with regulatory standards, but few facilities have enough job coaches to help foreign care workers bring their skills up to expected standards. Simply bringing in workers from abroad, when there is a lack of specialized staff to train them so that they can work effectively, is not going to remedy the shortage of care workers.

I often recall the words of a resident of a long-term care facility. This person told me, “Just when a care worker has gotten used to the job, she ups and quits, and you have to start all over again with a new person. I really wish that the same personnel would stay on the job for a while, because it takes some time for us care recipients to get used to a new person, too. Having the same staff look after residents for a long time is part of providing quality care.” These remarks make it clear that rapid staff turnover has a serious impact on those depending on them for their care.

There has been much discussion over how to resolve the care worker shortage, but I believe that the highest priority is training the right kind of leaders for the facilities. Many care facility managers are past the age of 40 and have outmoded ideas about personnel management. In many cases, inappropriate treatment by section heads or leaders in charge of guiding and training young staff is a major reason why the caregiving workplace is viewed as unappealing. These midlevel managers need retraining themselves, enabling them to provide better treatment for the staff serving under them. Having experienced care workers that younger staff can look up to and respect can also have a positive impact in attracting and retaining workers. Forced to compete with other industries for workers, the caregiving industry should, with the help of capable leaders, start by transforming itself into a more attractive career field.