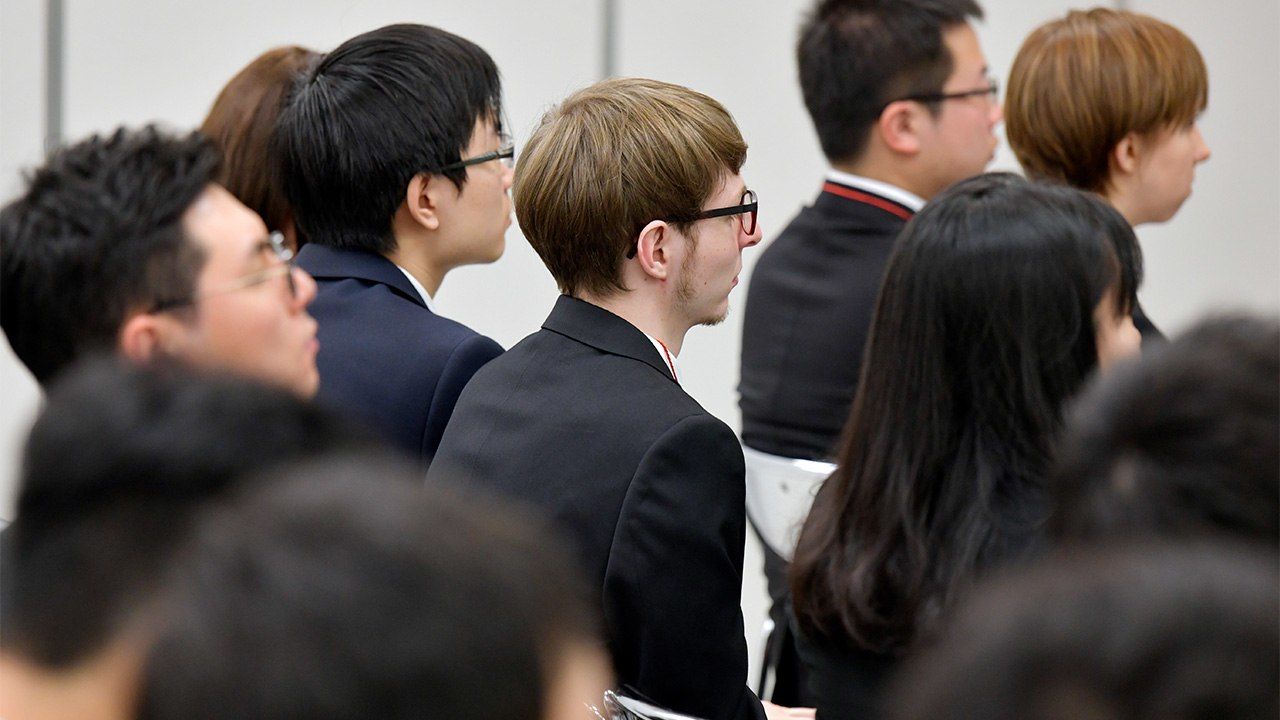 Society Politics Work Feb 19, 2020
Japan’s demographic crisis has spurred immigration reforms that will accelerate the influx of foreigners into a country long regarded as homogeneous and insular. Can Japanese society rise to the challenge?

In April 2019, Japan officially opened its doors to lower-skilled foreign workers under a major revision of the Immigration Control and Refugee Recognition Act. The creation of the Specified Skills visa program for blue-collar and other workers represents a historic change in Japanese immigration policy. But questions linger as to whether Japanese society, often described as insular and homogeneous, is prepared to welcome foreign residents and facilitate their participation on an equal footing.

I was confronted by such questions when I traveled to Cairo last December, at the behest of the Japan Foundation, to speak in Parliament and at Cairo University. “Do you think Japanese society can change and become less insular?” I was asked. “Isn’t the government just admitting foreign workers to do the jobs Japanese people don’t want any more?”

These are legitimate concerns. The Japanese have a reputation for looking down on nonwhites from other countries. Moreover, the recent deterioration in diplomatic relations between Japan and its neighbors, China and South Korea, has affected popular sentiment regarding the citizens of those nations. The far-right Japan First Party attracted considerable media attention during the unified local elections of 2019 with its anti-Korean, anti-immigration rhetoric (though the party has yet to win a seat at the local or national level).

It should be stressed that one rarely encounters such extreme forms of bigotry among ordinary Japanese people. Foreign students and trainees from Asia and elsewhere have entered Japan by the tens of thousands over the past two decades and have become a familiar sight behind the counters of convenience stores. Almost everyone in the local community views them positively, as intrepid, hard-working young people coping with the demands of life far from home. Increasingly, the Japanese people are coming to see that their society will need foreigners if it is to continue functioning as the native population dwindles and ages.

However, there is no doubt that foreign residents face serious challenges adapting to life in Japan, and that much remains to be done to ensure that our new immigration system works. In the following, I review some of the steps taken thus far before spotlighting the key issues demanding action. 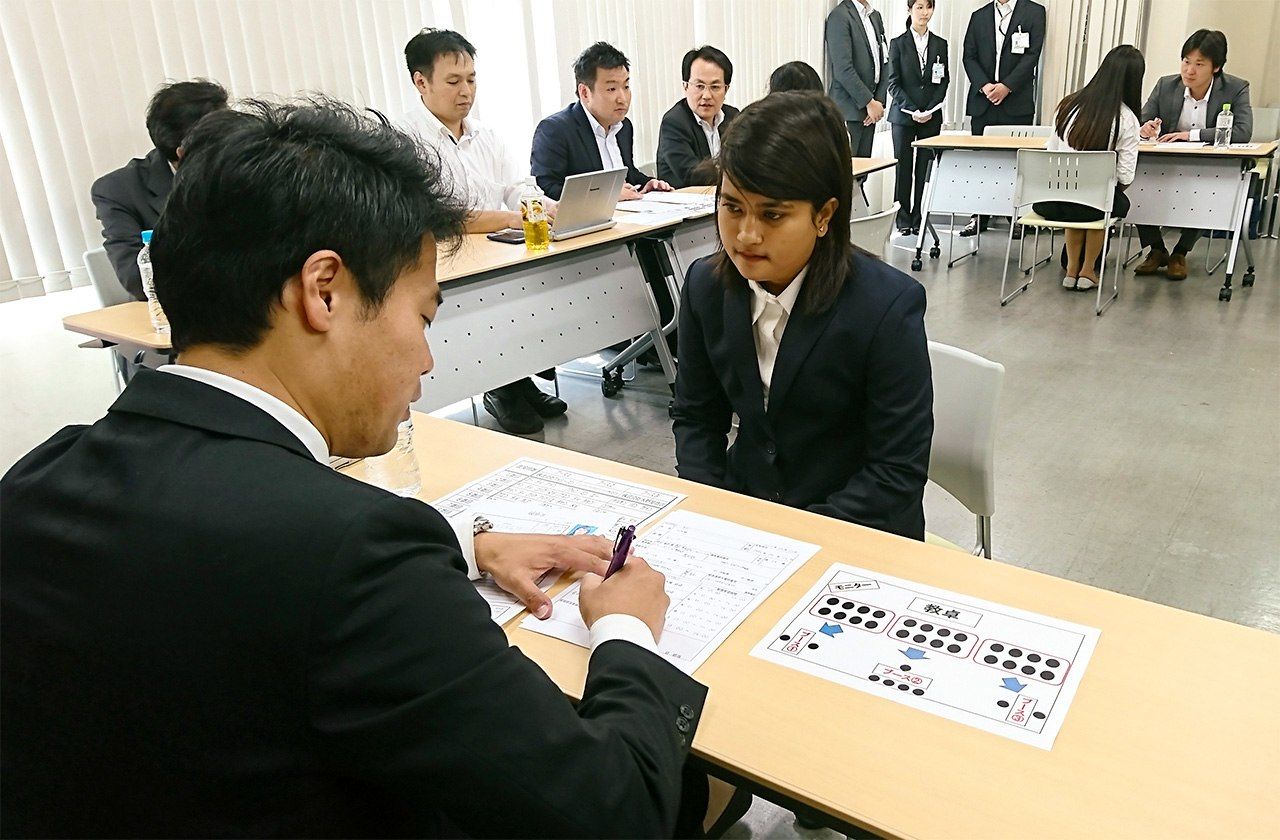 Foreign students search for part-time work at a convenience-store jobs fair in Tokyo in May 2017. (© Jiji)

Until quite recently, the central government has done very little from a policy standpoint to assist foreigners living in Japan or promote their integration into society. On the other hand, local governments and nonprofit organizations have been working hard to fill the gap at the regional and community level. The municipal governments of Nagoya and Kitakyūshū and the Nagano prefectural government have set aside an annual “multicultural month” devoted to educating the public about cultural diversity and tolerance. In terms of legislation, Miyagi Prefecture has led the way with its Ordinance Pertaining to the Promotion of the Formation of a Multicultural Society , aimed at “building a community that upholds the human rights and social participation of all prefectural residents regardless of nationality or ethnicity.” The government has established a support center and other multilingual resources for foreign nationals and holds regular social events bringing together Japanese residents and foreigners living and working in the prefecture under the Technical Intern Training Program (see below). Shizuoka Prefecture has passed a similar ordinance.

Hate speech is an important target of efforts to promote tolerance. The central government made some attempt to address the issue with the 2016 Act on the Promotion of Efforts to Eliminate Unfair Discriminatory Speech and Behavior against Persons Originating from Outside Japan, although it fell short of criminalizing such behavior. Osaka enacted its own ordinance against hate speech in the same year, and in December 2019, Kawasaki became the first municipality to pass an ordinance that makes hate speech a punishable offense.

In Shinjuku, a municipality in central Tokyo with a large foreign population, a community council was established by local ordinance with the aim of building a more harmonious and livable community for Japanese and foreign residents alike. The Shinjuku Multicultural Community Building Committee, of which I am chair, holds regular meetings where representatives of various ethnic groups freely share their experiences and opinions. In this way, we are working to shed light on and improve the living conditions of Shinjuku’s growing population of foreign nationals.

As part of its effort to build a harmonious multicultural community, Shinjuku has conducted an extensive questionnaire survey of its foreign and Japanese residents. The results of the 2015 survey help to highlight the challenges facing newcomers to Japanese society as they attempt to lay the basic foundations for daily life, from renting an apartment to opening a bank account.

The 2015 Shinjuku survey asked foreign residents how frequently they felt subject to discrimination or prejudice in their dealings with Japanese. A full 35% responded that “it happens sometimes,” and another 7.5% reported that “it happens often.” More than half of these (51.9%), the largest number, identified “apartment hunting” as a situation in which they encountered discrimination. The second most frequently cited situation was “looking for a job” (33.2%), followed by “administrative procedures” (25.6%).

Comments in the “free response” section of the survey reveal a wide range of impressions. A woman from Myanmar had nothing but praise for Shinjuku, declaring that, in her seven months in Japan, everyone she had dealt with, from municipal officials to hospital and school employees, had treated her and her family courteously and kindly and that she had seen no evidence of discrimination. However, another woman lamented that her husband had been turned away time and again when searching for an apartment for the sole reason that he did not speak Japanese. She called on municipal authorities to publish local housing guides for foreigners.

The language barrier is cited time and again as an obstacle to integration with the local community. In the 2015 survey, 58.6% of respondents reported experiencing difficulties with the Japanese language. “Reading newspapers and notices” was the problem most frequently cited (49.3%), followed by “understanding instructions from municipal officials and hospital staff” (46.6%) and “ordinary conversation” (37.6%). Among the comments in the free-response section were calls for multilingual editions of the Guide to Living in Shinjuku and other publications. “It’s very common to find oneself in violation of the rules simply because one can’t read Japanese,” commented one Chinese woman. Others called for expansion of the Japanese language classes sponsored by the municipal government. “One class a week is not enough to master Japanese,” said a Chinese woman, adding that “lessons focused on Japanese used in daily life would be ideal.”

The language barrier can be a serious issue for children as well as adults. Lack of proficiency in Japanese often leads to poor achievement and social isolation at school. Indeed, just “looking like a foreigner” can provoke bullying in many cases. Some parents transfer their children to international school to protect them, but for many the tuition is prohibitive. Children who are bullied or shunned at school are apt to drop out and grow up undereducated, perpetuating the cycle of poverty and isolation.

In December 2018, in conjunction with the revised immigration law, the government announced a package of “comprehensive measures for acceptance and coexistence of foreign nationals.” Under the policy, the government, recognizing foreign residents as members of the community, has allocated ¥21.1 billion for measures to promote inclusion and integration. In June 2019, it enacted the Act for the Promotion of Japanese Language Education, which explicitly recognizes the government’s responsibility to provide language instruction to foreigners living in Japan. These are important steps forward.

Closing the Back Door

Unfortunately, the “comprehensive measures” do not have the force of law and do not guarantee the rights of foreign residents. The lack of guarantees is particularly alarming in light of the continued expansion of the Technical Intern Training Program, which has been widely criticized for opening the door to human rights abuses and illegal immigration.

Established in 1993, the TITP has served for years now as a backdoor for foreign workers, who are recruited from other Asian countries ostensibly for training purposes. Admitted for a limited stay, the “interns” are assigned to farms, factories, and construction firms in need of cheap labor. They work at minimum wage and are not permitted to change jobs. Human-rights abuses have been reported, and some 9,000 of the interns have gone missing, according to the latest government figures.

As of fiscal year 2018, approximately 80,000 foreign trainees were entering Japan each year under the program. Recently, the number of interns assigned to workplaces in Kyūshū and Shikoku has spiked as labor shortages worsen in those outlying regions. There is good cause to worry that these workers, denied such basic rights as fair wages and freedom of movement, will encounter hardship and discrimination as they pour into communities that have little prior experience with foreigners. The result could be more disappearances and visa overstays, as well as potential public safety problems. What we need is a fundamental law on the status and rights of foreign residents in Japan.

“One Team” for Japan’s Future

During the 2019 Rugby World Cup, held in Japan under the motto “One Team,” the multinational, racially diverse Japanese rugby team thrilled and inspired fans with its historic advance to the top eight. Overcoming their differences to achieve a common goal, the Brave Blossoms offered a shining example for Japanese society to follow in the coming years.

Japan’s population is declining at a rate of nearly 500,000 a year. The number of foreign residents is increasing at a rate of about 200,000, and that growth is expected to pick up.

The future of Japanese society hinges on our ability to adapt our systems and our attitudes to these new realities. The government needs to send a clear message about its commitment to building an inclusive society in which foreign and Japanese nationals can live and work together harmoniously.