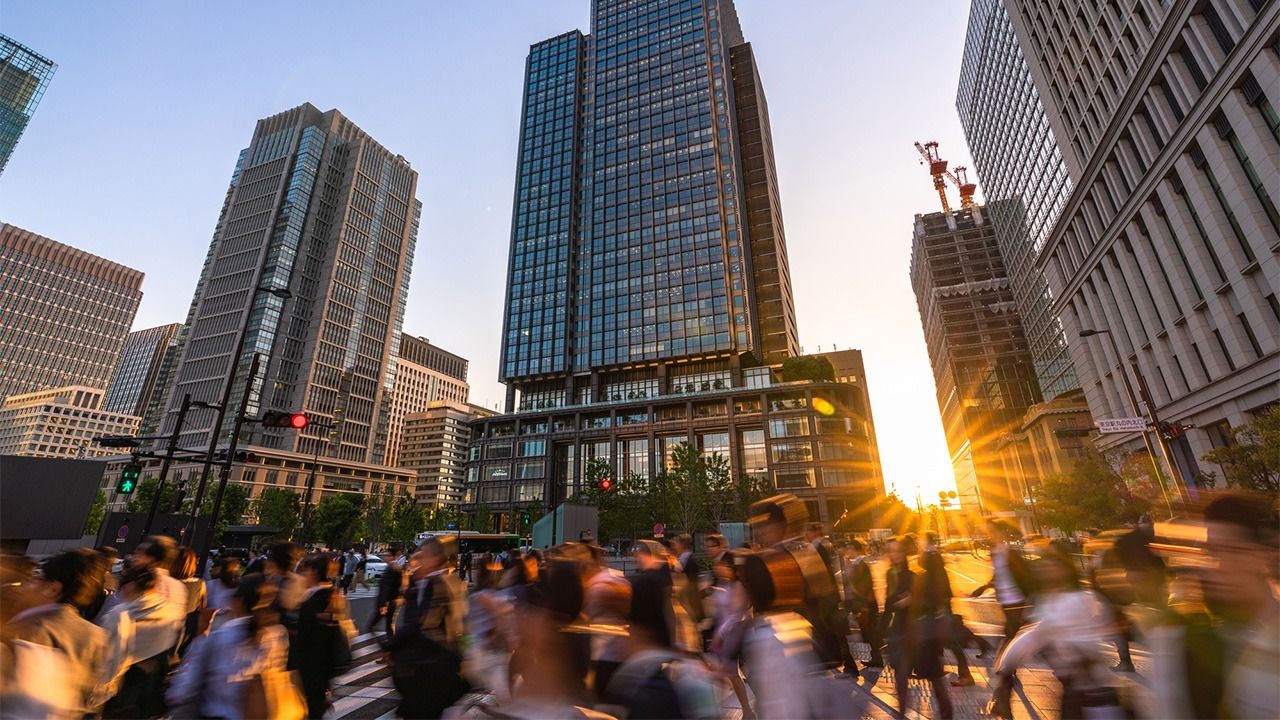 The Japanese Economy in 2020: A Recovery Continues Despite Uncertainties

Economy Society Politics Jan 15, 2020
Global uncertainties involving the United States and China and a potential downswing after the Tokyo Olympic Games are giving rise to pessimism about Japan’s economy in 2020. Despite such concerns, the author, a leading economist in Japan, predicts that Japan’s economy will continue its gradual recovery in 2020.

In the Bank of Japan’s December Tankan (Short-Term Economic Survey of Enterprises) released on December 13, 2019, large manufacturers’ assessment of business conditions (percentage of enterprises responding “favorable” minus the percentage responding “unfavorable”) was 0, down from the +5 reported in September. Business confidence has worsened for four straight quarters, reaching a low unseen since the –8 of March 2013. The worsening of the confidence index in December was influenced by the slowing of the world economy ensuing from the US-China trade war and by the suspension of factory operations resulting from Typhoon Hagibis and other natural disasters.

The outlook of large manufacturers to March 2020 was flat at 0. The survey period of the December Tankan being November 13 to December 12, however, was a case of bad timing. Had the survey reflected the “phase one” trade deal that the United States and China reached on December 13, which eased global economic uncertainties for the time being, and had it reflected the results of the general election in Britain on December 12, the outlook to March would likely have been a positive figure.

Meanwhile, large non-manufacturers’ assessment of business conditions fell 1 point from +21 in September to +20 in December. Despite the increase of the consumption tax, this index has remained in the twenties for 12 consecutive quarters. Business sentiment appears to have been supported by the reward points program for cashless purchases introduced with the consumption tax increase and by inbound demand generated by the Rugby World Cup hosted by Japan. The business conditions index of small nonmanufacturers was +7 in December, another positive figure over successive quarters. The sentiment of nonmanufacturers holding to high levels suggests that domestic demand is firm.

General business conditions portrayed by the index for all enterprises and industries was +4 in December, down 4 points from the +8 in September. This was, however, a firmer figure than the +2 forecast for December in the September survey. Broadly speaking, companies with a favorable view of the economy continue to outnumber those with an unfavorable view. In the December Tankan, all enterprises and industries foresee a firm increase of 5.0% in capital spending plans (including software R&D) in fiscal 2019.

The Effect of Stimulus Measures

The higher forecast reflects a stimulus package of ¥13.2 trillion in fiscal expenditures that the Cabinet approved on December 5, 2019. Once private-sector expenditures are included, the size of the stimulus will come to about ¥26 trillion. The stimulus package includes spending for (1) disaster restoration and recovery and safety and security improvements, (2) priority support of people attempting to overcome the economy’s downside risks, and (3) investment in the future and the maintenance and improvement of economic vitality following the Tokyo Olympic and Paralympic Games.

The majority view in the December ESP Forecast is that Japanese and US interest rates will trend at their current levels to the end of 2020, and monetary easing is expected to continue.

Despite some uncertainties, Japan’s economy is likely to continue recovering in 2020, as the faltering of external demand and the downturn of the manufacturing industry come to an end and as domestic demand remains firm. Factors contributing to this outlook are (1) expectations that foreign demand will rebound with the easing of current uncertainties about the global economy, (2) the bottoming of the inventory cycle for the electronic parts and devices industry from investments in next-generation 5G base stations and from the development of new smartphone models, (3) the ongoing firmness of domestic demand, (4) government stimulus measures, and (5) the 2020 Tokyo Olympic and Paralympic Games.

I have developed a consumption tax/tax increase diffusion index using the Economy Watchers Survey (Figure 1). This index shows how respondents view the economy relative to the consumption tax increase based on their comments. Figures of 50 or more indicate a favorable view of the economy.

Source: Prepared by the author based on the Economy Watchers Survey of the Cabinet Office.

The number of respondents for current business conditions rose from 40 in the January 2019 survey to 548 in September and to 580 in October, after which their number declined to 414 in November. It is reasonable to think that interest grew as the date of the consumption tax increase approached and then fell off after the tax hike.

The current diffusion index was 50.5 in the September survey, surpassing 50, the dividing line between favorable and unfavorable sentiment. Forty-three respondents said that conditions had improved, and nearly all mentioned the acceleration of demand before the tax increase. The index, however, slumped to 30.1 in October following the consumption tax hike, after which it improved slightly to 34.1 in November.

The future diffusion index had 196 respondents in the January survey, which increased to 796 in September, when the future index was a low 29.4. Respondents of 455 in October fell to 303 in November, and an index of 41.8 in October improved to 44.2 in November. This likely indicates a widespread view that consumption expenditures would bottom out after faltering momentarily following the consumption tax increase.

Consumer Confidence of the Elderly Bottoms

The Consumer Confidence Index in the Cabinet Office’s Consumer Confidence Survey has declined since October 2018, one year before the increase of the consumption tax, mainly pulled down by sentiment among the elderly. This seasonally adjusted index concerns households of two or more persons, and an index of 50 or more signifies that consumer confidence is positive. In October 2019, the index rose 0.6 points over the prior month to 36.2, bringing its year-long decline to an end. Further cheer was provided by the index climbing 2.5 points to 38.7 in November. Consumer confidence has tended to improve in past instances when the consumption tax was raised, which was also the case this time. It is reasonable to say that the consumer confidence of the elderly has bottomed after a sustained period of weakening.

Figure 2 compares the composite diffusion index on business conditions expressing the consensus view of economic forecasters in the November and December ESP Forecast. This index exceeds 50, the dividing line between an expanding and contracting economy, in July–September 2019. It then tumbles in October–December 2019, when the consumption tax was raised. The index then returns to a level above 50 in January–March 2020, and in the most recent December survey, it is 80 or more in April–June 2020 and in July–September 2020.

The index for October–December 2020, however, was somewhat less than 50 in surveys to November due to concerns about a downswing following the Olympic and Paralympic Games. Now that a stimulus package extending beyond the Olympic Games has been approved, the index has surpassed 50 in the December survey. In 2021, the index rises further in the January–March, April–June, and July–September quarters. The consensus view of economists is that the gradual recovery of the economy will continue. 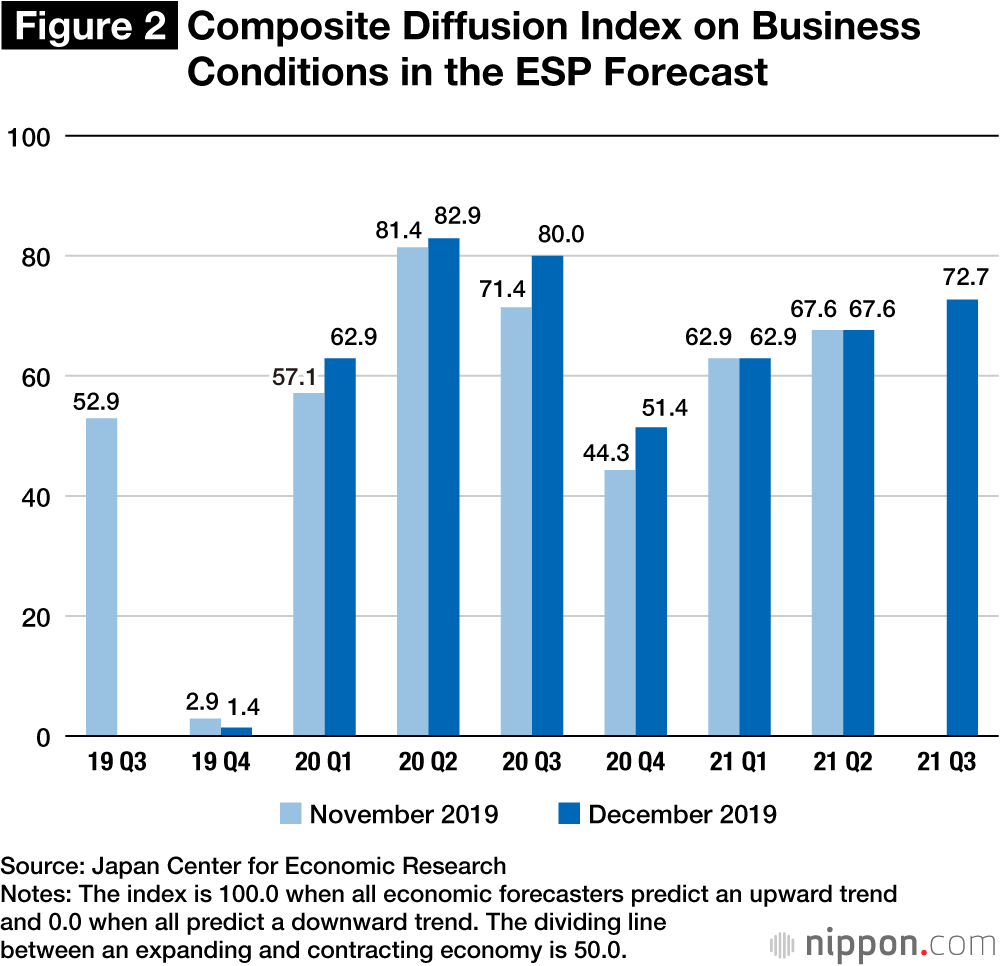 The economy shows a close relationship with the popular year-end song festival that NHK, Japan’s public broadcaster, broadcasts on December 31. In each of the years that Kitajima Saburō cheerfully sang “Matsuri” (Festival) at this festival, the economy was in an expansion phase at year-end. The popular boy band Arashi, which will cease activities by the end of 2020, is also closely linked to year-end economic conditions.

Arashi appeared for the eleventh time at the song festival in 2019. In each of the years that Arashi has done so, the economy was in an expansion phase at year-end. While the views of economists are divided about the year-end direction of the economy, in the December ESP Forecast, 25 out of 34 economists, or more than 70%, viewed the economy as expanding.

The economy has for the most part expanded in the years since Arashi debuted at the song festival in 2009. The one exception was 2012, when the economy peaked in March and turned downward. The economy then bottomed in November and was expanding again on December 31. Arashi has sung medleys at the song festival, and many of the songs selected were cheerful and upbeat, like “Happiness.” In 2019, Arashi will debut “Kaito” (Kite), NHK’s 2020 Olympic theme song.

The year-end song festival in 2020 will likely be Arashi’s final performance before the group ceases activities. Given the relationship seen between the economy and Arashi and the song festival, it is possible to say that there is a high probability that the expansion will continue at the very least to 2020 year-end.