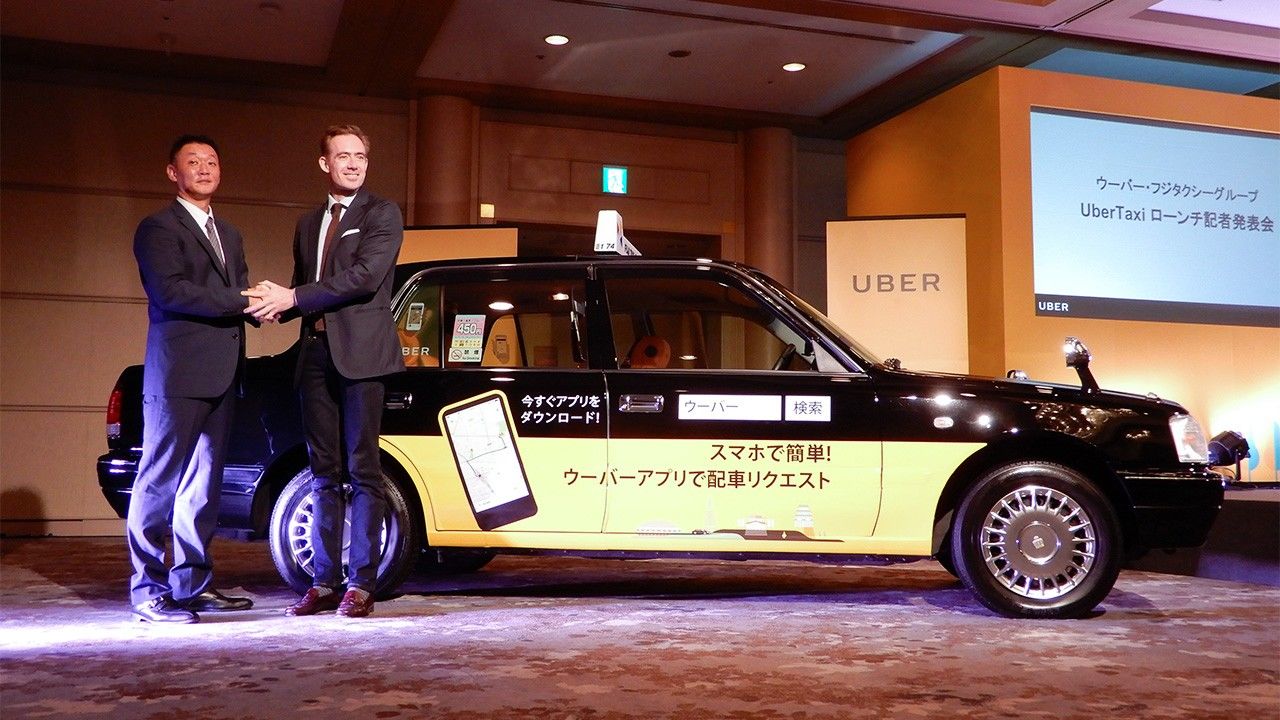 Economy Society Work May 8, 2020
In the “gig economy,” workers accept temporary and one-off jobs on an ad-hoc basis via the Internet. This style of working is catching on in the West, and is slowly gaining traction in Japan.

The “gig economy” is a nebulous term that experts have adopted to describe an emerging worldwide trend in digitally-driven freelance work. In 2018, the human resource journal Staffing Industry Analysts estimated the size of the American gig economy, broadly defined as any type of work of a fixed duration by directly- or indirectly-hired temporary employees, at $1.3 trillion. Organizations like the Oxford Internet Institute and professional services giant Pricewaterhouse Coopers have also heralded the burgeoning presence of the gig economy, although the onset of the coronavirus pandemic has thrown previously released predictions of growth in the sector into doubt.

According to Staffing Industry Analysts, there were  53 million gig workers in the United States in 2018, making up 35% of the total workforce. This figure includes 7.9 million workers who find jobs through online labor markets—the so-called human cloud—1.3 million statement of work (SoW) consultants, and 27 million independent contractors. 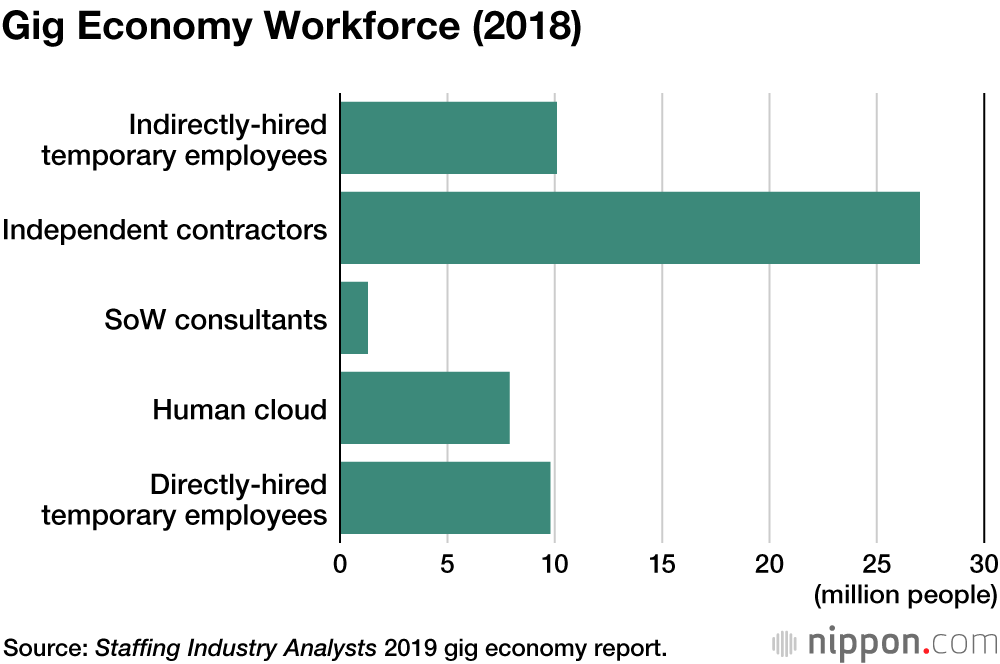 A prominent aspect of the gig economy is that advances in technology have made it borderless. While the United States accounts for 40% of staff sourcing that is part of the human cloud, some 70% of this work is performed in Asia.

Many Western corporations manage their human resources according to the concept of “total talent management,” meaning that firms build customized talent portfolios consisting of an optimum complement of talent selected from all the available options on the labor market. Such portfolios include regular employees, external human resources (freelancers, gig workers, consultants, and those already employed by other companies), and non-personnel resources such as artificial intelligence. In other words, the HR market is becoming global in scope as employers transcend traditional corporate frameworks and source talent from labor markets around the world. In English-speaking countries in particular, employers are increasingly turning to developing countries and Eastern Europe nations for IT staff and hiring workers in different time zones.

In the West, businesses of all sizes make active use of external specialists. Provided they have the required skills, gig workers are able to work flexibly and with a high degree of freedom, anytime, and anywhere. Demand is highest for sales, software, and creative specialists, and the spatial flexibility of gig workers makes them a valuable resource for addressing regional labor shortages.

The Crucial Role of Job Brokers

Many people associate the gig economy with drivers and delivery services such as Uber and Lyft, but it is actually more widely ranging, encompassing domestic services such as cooking and cleaning as well as highly skilled services like programming, app development, and website design.

The growth of the gig economy in the West is believed to be partly the result of the increase in the number of brokers that provide jobs via online platforms. To optimize supply, these brokers use high-tech tools and dedicated websites and apps to match gig workers to demand from corporations and individual consumers. All gig workers need to do is sign up with an online platform, provide information on what jobs they can do, and specify their availability. In addition to connecting clients with workers according to the service required, brokers support other steps in the processes, including performing background checks, providing information on past experience, facilitating communication, and offering payment options. Brokers provide gig workers with a better work environment by acting as guarantors, liaising with clients, invoicing, and collecting accounts receivable.

Trade with Individuals a Hurdle in Japan

In Japan, by contrast, business-to-business relationships are the norm. According to Keidanren (the Japan Business Federation), most corporations trade chiefly with other companies and tend to limit dealings with individuals to a few specialized tasks, such as graphic design and software development. While some corporations might want to commission more work to specialized staff, they lack the expertise in personnel development required to find the right people.

The need to properly match workers to tasks presents an enormous obstacle to companies tapping into the gig market in Japan. However, there are other reasons that corporations are hesitant to work with individuals, including the difficulty in assessing work quality and problems in placing high-value orders with individuals due to challenges in handling breaches of contract and claiming compensation for damages.

From the worker’s perspective, job offers typically come from former employers or former training institutions. While still responsible for a small share of the overall gig economy, brokers, sharing economy services, and talent agencies make up an increasing share of new business.

While ride-sharing services make up a large chunk of the gig economy in the West, Japan’s Road Transportation Act has hampered companies like Uber and Lyft by requiring that drivers get their taxi license before they can carry passengers. These restrictions on a potentially lucrative sector has slowed the overall growth of the Japan’s gig economy and meant that the traditional work habits of freelancers have not changed significantly. However, there are two areas in which the gig economy may grow.

The first involves the lifting of the prohibition on working multiple jobs. Now that the Japanese government has begun encouraging employees to take second jobs, an increasing number of businesses are removing moonlighting prohibitions from their work rules. Some corporations are allowing employees to work a second job if certain conditions are met, such as the job is undertaken for training purposes, is in a different industry, and does not affect the employee’s duties at their main job. Some companies also stipulate that the employee must be in his or her main job for a specified minimum time. A glance at corporations that removed prohibitions on working multiple jobs since 2016 reveals a range of leading companies, including Asahi Breweries, Kagome, Konica, SoftBank, Yahoo, and Rohto Pharmaceutical.

The second area is gigs performed by senior citizens. On February 4, the cabinet of Prime Minister Abe Shinzō approved an amendment of the Act on Stabilization of Employment of Elderly Persons that opened the way for workers to remain on the job until the age of 70. In addition to lifting the retirement age and encouraging the practice of reemploying older workers on a casual basis, the amendment also allows freelancers and entrepreneurs to be compensated as contractors. Once passed into law, the amendment will come into force in April 2021.

In an age when people can expect to live until 100, there is surely more that can be done to utilize freelancers and gig workers of all ages who can choose when and where they want to work as their health allows, rather than being bound by inflexible work regimens that are regulated by work rules.

It is now possible that Japan will see an increase in part-time gig workers, be they working second jobs or on contract. It remains to be seen how these two emerging labor markets will evolve, but good personnel matching, development of roles, and a high level of support will certainly play a key role.