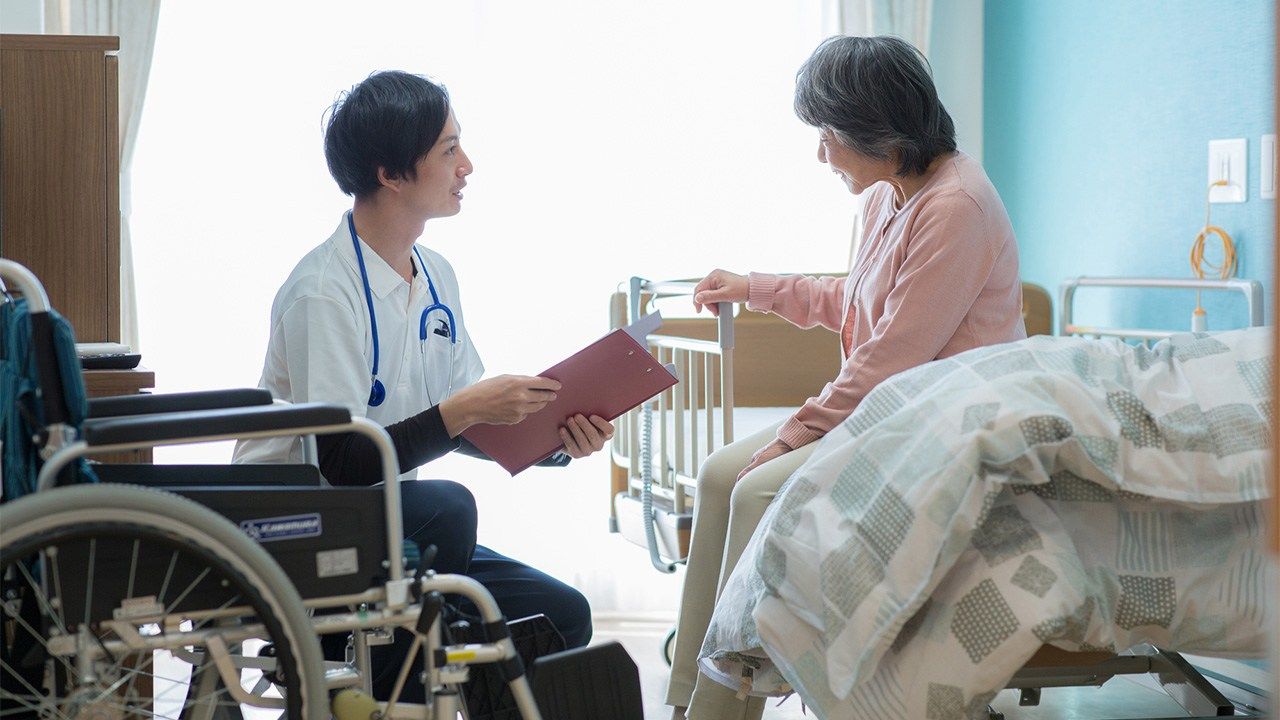 Society Health Aug 11, 2020
A list released by the Ministry of Health, Labor, and Welfare identifying 424 public hospitals as candidates for reorganization or amalgamation has stirred strong opposition. Lost in the shuffle, however, is that the list aims to reorganize medical services to better meet community needs.

Discussions are currently taking place on reevaluating and reorganizing the functions of Japanese hospitals. Although many hospitals claim that they are capable of handling cancer treatments, emergency medicine, perinatal medicine, surgery, and other acute-phase care, the government’s list of 424 public hospitals with less demand for advanced medical procedures released in September 2019 is prompting calls for reevaluating hospitals and the menus of services they provide.

Concern about the sustainability of the public health insurance scheme is behind the push for reevaluation. Fully a third of the government’s budget goes to social security spending, and a third of that amount is spent on healthcare. The government, which is hoping to take the primary balance back into the black at an early date, has made cutting back on healthcare spending one of its top priorities. To optimize spending, it is focusing on reducing the number of hospital beds and assigning some hospitals to focus on geriatric care.

Health statistics for 2019 from the Organization for Economic Cooperation and Development show that, per 1,000 population, Japan has a total of 13.1 hospital beds, Germany 8.0, France 6.0, Italy 3.2, the United States 2.8, and Britain 2.5. From this it is clear that, on a per capita basis, Japan has more hospital beds than its peers. (As an aside, the death rate from the coronavirus is lower in countries like Japan, South Korea, and Germany that have comparatively more beds per population. The connection between this factor and the death rate is not clear, and further investigation is needed to look into this from the crisis management perspective.)

In a super-aging society like Japan’s, health and social care have converged. Consequently, there is a need for facilities that can provide post-acute care and long-term care focusing on rehabilitation and helping patients remain able to carry out their daily lives. But during the postwar years of rapid economic development, hospitals were set up mainly for acute care needs, dealing with large numbers of patients with trauma, cerebrovascular or circulatory system issues, or cancer. That is part of the reason why so many hospitals continue to provide acute-phase care even today.

To optimize social security outlays, the government has made sporadic moves to systematically reduce the number of hospital beds and encourage hospital specialization and coordination. Provision of healthcare services is based on the 1948 Medical Care Act, which was revised for the first time in 1985 to introduce the concept of tiers such as those found in places like France. In those countries, primary care is generally provided by individual municipalities, secondary care by multiple municipalities, and tertiary care at the prefectural level, with each of these tiers recognized as a separate level. Government reforms have decreed the number of hospital beds for secondary-level hospitals, which can usually deal with emergency care and routine medical needs on their own, and those hospitals are no longer allowed to exceed the designated number of beds.

The Medical Care Act has been revised a number of times since then, and policies concerning institutional specialization and coordination have been formulated. In 2015, the central government collated information on medical procedures carried out by each hospital in the country. Based on this, the authorities forecast the number of beds, by injury or disease and by bed function, that would be needed in 2025 and 2040 in each region, generally at the secondary tier level. At the same time, based on that data, a system similar to France’s regional medical plan, the Schéma régional d’organisation sanitaire, was introduced to evaluate bed functions at each hospital.

When the review of available medical facilities in each region was carried out, one issue that arose was how to apportion duties between public and private hospitals. The government asked public hospitals to draw up plans outlining the medical services they planned to offer in their respective communities by the target dates of 2025 and 2040. This formed the basis for the government’s September 2019 list of the public hospitals providing acute care that it judged should reevaluate their services. Committees in each region conducted a similar analysis for private hospitals, although the names of those institutions were not made public.

The major aim of this analysis was to prompt hospitals to shift to offering the medical services their communities need. Many of the public hospitals on the government’s list are small facilities in depopulated areas. Rather than having high-tech facilities for treating cancer of heart attacks, or performing surgery to deal with acute conditions, hospitals like those should be geared more toward providing acute and post-acute-phase care for older people with multiple chronic conditions who experience repeated episodes of heart failure, pneumonia, or urinary tract infections and have a range of healthcare needs.

The analysis also identified other issues, such as hospitals providing little in the way of acute-phase care. For example, one public hospital on the list handles 400 inpatients a year but has very few emergency admissions of patients with serious conditions or for cancer operations. Most of its clients, in fact, are seniors with hypertension and a host of other chronic ills, or individuals recuperating from surgery performed at nearby large hospitals.

Its outpatient department, supported by personnel dispatched from a university hospital in the same prefecture, offers ophthalmology, orthopedics, and other medical services to meet community needs. Only about 60 patients a year are admitted after being brought to the hospital by ambulance, mostly for pneumonia, heart failure, or some kind of acute ailment.

Based on its performance figures, it is easy to say that there is no real need for a hospital like this, but small public hospitals are vital for residents of depopulated communities’ peace of mind. Seen from the dual perspectives of cost-effectiveness and medical care quality, however, such hospitals should most likely not be in the business of providing advanced cancer treatment or performing surgery. Community care needs center more on good medical care for the post-acute phase of various conditions. Given the financial constraints on healthcare provision, if communities expect to enjoy a certain standard of medical services, greater emphasis should be placed on hospitals with more general practitioners who can deal with a wide range of conditions, rather than doctors in narrow specialties.

As Japan’s population ages and the number of seniors with multiple chronic conditions increases, there is a growing need for general practitioners who can offer comprehensive care. Medical education and training in Japan, however, focuses on developing specialists, and there is little interest in training general practitioners. Change is needed in this respect.

More GPs are being trained today, but having them deal with outpatients after two or three years of resident training, as is common in the West, is not an appropriate solution for Japan. In the United States and Europe, these generalists act as gatekeepers, seeing patients in their offices and referring them to nearby hospitals if necessary. It is rare for their offices to be equipped with sophisticated diagnostic equipment or to handle imaging or blood tests, tasks usually outsourced to specialists.

Given the number of people in this country with multiple coexisting conditions who need comprehensive care, there are increasing needs for post-acute-phase care. Japan therefore needs to train doctors to work in convalescent hospitals or senior care facilities. The solution is to provide GP training to doctors already working in hospitals, which several hospital organizations are now doing. The government’s release of the list of public hospitals should be viewed as a renewed opportunity to stimulate discussion of the future of medical training in this country.

Another purpose of releasing the list of underperforming public hospitals is to promote reorganization and amalgamation in the industry. Japan has a huge number of small hospitals, both public and private. One advantage of these smaller facilities is that they can easily be converted to provide the medical services their communities need. Mostly small private hospitals have shifted to providing rehabilitation, convalescent care, or nursing care services, for which there are ever-growing needs as the population ages, and it is thanks to local resources of this kind that the healthcare system has been able to transition smoothly to looking after seniors.

On the other hand, lack of scale has its own issues. Take, for example, response to the coronavirus pandemic. If numerous small hospitals each treat small numbers of COVID-19 patients and many of their healthcare workers come into close contact with patients at several such hospitals, it increases the chance of infection that could close them down, dealing a blow to healthcare throughout the community. Larger hospitals, on the other hand, have more personnel reserves and can physically close off part of their facilities, allowing them to isolate COVID-19 patients and continue providing medical services to the community.

Having more personnel available also means that more procedures can be performed at larger institutions. Numerous studies have shown that the more procedures are performed, the better outcomes are in treating cancer, heart disease, and other serious conditions. In Japan, a surgeon coming off a night shift will at times go straight to the operating room. This is unheard of in Europe, where there is a mandatory 24-hour rest period for doctors after night shifts. Quality surgery also needs a full complement of specialists like anesthesiologists or radiologists. Concentrating resources in larger institutions to make this possible improves the quality of medical care and ultimately benefits the public.

In the postwar period, Japan encouraged privately run hospitals to provide healthcare. Amalgamating those facilities will be no easy task. Many of them are proud pillars of their communities, give residents peace of mind, and are often the largest employer in the district. The hospitals and community authorities are understandably strongly opposed to any talk of concentration or amalgamation. To relieve hospital operators’ and communities’ anxieties, it is up to the central and regional governments to carefully explain how the quality of medical services will be maintained after facilities are streamlined.

Hospitals in an aging Japan should be organically linked, and I expect that in the future amalgamation will take place, either under medical corporations promoting community healthcare or as part of hospital chains. Nevertheless, such changes should be carried out under the guiding premise of solidarity with the public and a strong public welfare orientation.