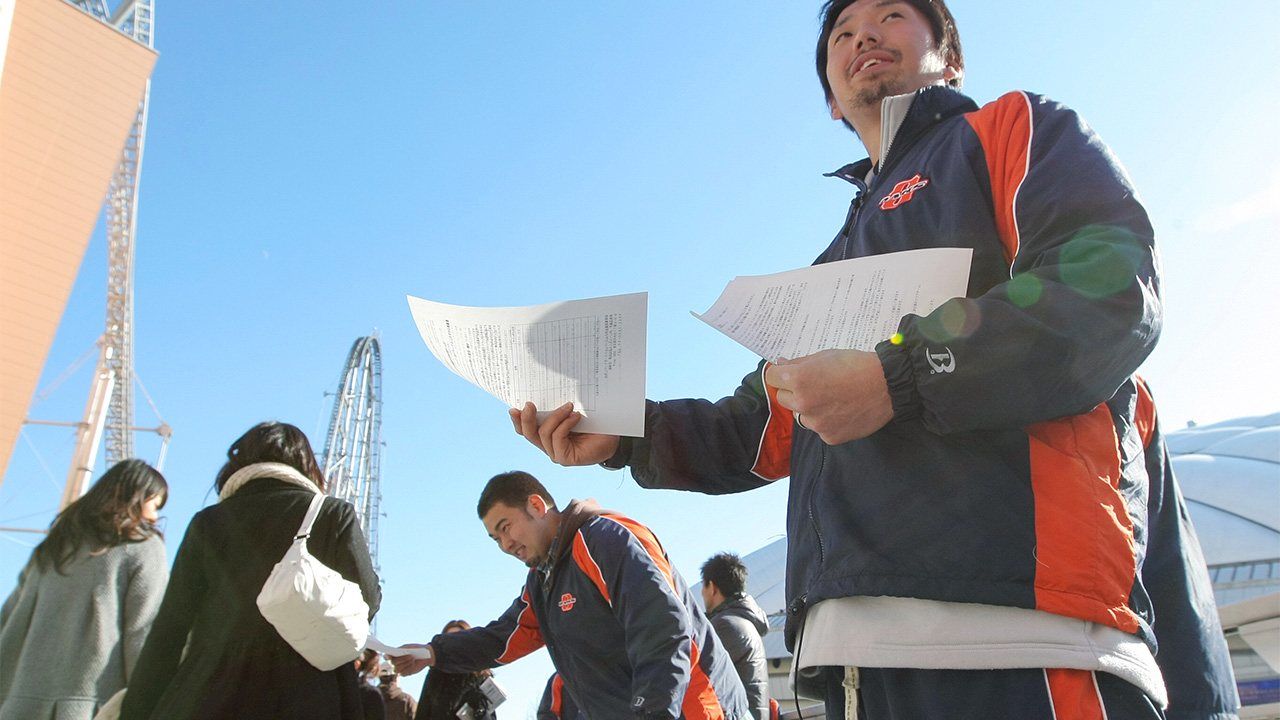 COVID as a Catalyst for Corporate Sports Reform

Sports Tokyo 2020 Economy Society Work Jun 29, 2020
The COVID-19 pandemic has resulted in the first ever Olympic Games postponement and the cancellation of many other sports events around the world. The effects of the pandemic are also being felt by major sponsors, raising fears over the future of corporate sport. As many teams suspend activities, the worst may be yet to come.

Japanese corporate sport is a home-grown and somewhat unique institution. Unlike the West, where sport is dominated by regional club teams financed by membership dues from individual members as well as corporate donations—take the Spanish soccer titan FC Barcelona as an example—Japan employs a corporate team structure known as a jitsugyōdan, in which teams comprised of employees from the same company play against each other. In the postwar period of rapid economic growth, Japan’s thriving economy contributed to an increase in the number of corporate sports teams.

Many of Japan’s corporate-dominated sports are characterized by leagues whose teams play against each other over the course of the year in the quest for the championship. While different sports give different names to these playoffs, I call this the “Japanese tournament format.” This style was first introduced in soccer, before the advent of the Japan Professional Football League, better known as the J. League.

West German coach Dettmar Cramer, who coached the Japanese team in preparation for the 1964 Tokyo Olympic Games, is regarded as the father of Japanese soccer. It was Cramer who proposed the establishment of the Japan Soccer League. Cramer figured that rather than a single-elimination knockout format, which offers a relatively small number of matches, a nationwide, round-robin format, in which every team plays every other team, would give players far more game time, thereby helping to raise the standard of Japanese soccer. The JSL was established in 1965, and was followed by similar leagues for basketball and other sports. More and more nationwide leagues were established, functioning not only as sports teams but also as part of their sponsor companies’ marketing strategies.

The role of corporate sport has changed over the years. In the early days, sports teams were chiefly seen as a perk that would help employees stay healthy and stress-free. Then, as teams began to take part in tournaments, they were joined by cheerleaders and cheering squads, and the teams came to be seen as a vehicle for boosting employee morale. Later, as corporate sport gained more coverage in the media, teams were called on to promote their employers.

The End of the Bubble and the Financial Crisis

When your job is promoting your company, the very act of playing a sport becomes work. Increasingly, corporate athletes were released from their desk jobs so that they could concentrate entirely on their training. However, this made team members distant from other employees, reducing benefits for employee morale. At about the time that this was becoming an issue, Japan was hit by the bursting of its asset bubble. Left, right, and center, companies were forced to cut costs. First to go was funding for sports and the arts.

In the years between the collapse of the asset bubble in around 1990 and the great financial crisis of 2007–8, many corporate teams disappeared, with baseball hit hardest. While the Japan Amateur Baseball Association boasted 237 corporate members in 1963, this had fallen to a mere 84 by 2008. The cuts had ramifications for traditional teams as well. In 2000, women’s volleyball powerhouses Yunitika and Hitachi were disbanded. The women’s volleyball team that won gold at the 1964 Tokyo Olympics—nicknamed the “Oriental Witches”—had all been employees at the Kaizuka factory of fiber manufacturer Nichibō (now Yunitika), and from the 1970s, Hitachi became a source of top Olympic athletes. In the new economic climate, however, even teams as prestigious as these were seen as deadwood. The first wave of cuts to hit corporate sport came with the collapse of the asset bubble in the late 1990s, while the second wave came with the 2007–8 financial crisis and caused more corporations to axe their baseball, track and field, American football, and women’s soccer teams.

From Ownership to Support

As growing numbers of athletes lost their outlets, some teams began to experiment with new formats. Nippon Steel pioneered the transition from ownership to support, converting many of its sports teams into local clubs. By dispersing its teams among affiliates and local businesses, Nippon Steel opened the door for many more businesses to support these sports teams as sponsors. The Sakai Blazers volleyball team in Osaka Prefecture, the Kamaishi Seawaves rugby team in Iwate, and the Kazusa Magic baseball team in Chiba are all good examples of this.

As the sun set on corporate sport, we also saw the establishment of independent professional baseball leagues, including the Shikoku Island League, and the expansion of the J. League to include a second and third division. Japan’s national basketball league also split and went professional. The pro basketball B League, established in 2016, has now grown to include a total of 36 teams across its first and second divisions. Players, too, searched for paths to financial self-sufficiency, with some athletes declaring themselves professional, signing up with managers, and seeking sponsorship from multiple corporations. Those involved in team sports like soccer often made their way to overseas professional leagues.

In this way, the waves of collapse of corporate sports in Japan had the effect of creating a more diverse range of competition forums for top athletes. When Tokyo won the bid to host the 2020 Olympics, it looked like things were improving for them still more.

But the coronavirus pandemic plunged Japan into a completely unforeseen economic crisis, which is now projected to be prolonged. We simply don’t know to what extent businesses will continue to support sportspeople, and indeed whether they will even be able to; the futures of not only corporate teams but also club teams are at stake. Top athletes who play for Japan are safe, at least until the Tokyo Olympics next year. However, if COVID-19 cannot be brought under control, the Games themselves may be in doubt.

It goes without saying that lower-ranking competitors are in an even more precarious position. Since the bubble economy’s collapse, there has been a notable increase in the number of athletes who are permanently employed by, or at least have contracts with, corporations. There are also many more foreigners playing on professional contracts these days. Both groups work in an environment that enables them to concentrate on their sport, with little demanded of them in terms of office work. While the advantage of this arrangement is that these players are free to concentrate on practice and competition, if the club is mothballed, or even disbanded, they risk losing their jobs and the opportunity to compete.

Corporate sport remains an important institution that maintains standards of excellence among Japanese athletes. However, the media tends to focus on top Olympians, while devoting little time to corporate sport. This means that it will no longer be enough for corporate athletes to simply raise their employer’s profile by winning games. This is clear when we look back on the difficult past of this sporting realm, in which many teams fell victim to cuts. Those involved in corporate sport need to reconsider its role before the third wave of cuts hits.

We need to act urgently, but first we need to understand why company teams are there in the first place. As the public are told to stay at home and sporting fixtures are cancelled, videos of athletes training are circulating on social media. I believe such publicity can be used as a starting point for rediscovering ways to connect with the community while we wait for events to restart.

The value of corporate sport is in its ability to give back to the community. Corporations profit from having members of the public buy their products and services. You could say that sport is part of the way corporations put something back. Teams therefore need to protect the bonds between corporations and the community. Teams that are able to transcend mere monetary value stand to reap great rewards in the future. In reality, however, corporate athletes often find themselves in an environment where they are completely focused on their sport, unconcerned with what is going with their employers, let alone the rest of society. One day, out of the blue, the company pulls the plug, citing hundreds of millions of yen in annual running costs. This has been an all-too-familiar story since the bubble collapse in the early 1990s—one that I hope will not be repeated.

Once sporting events start up again, athletes will need to rethink their connection with the community, the most familiar part being local youth teams and local children. Forging stronger bonds with high schools is one option. Athletes need to be more active participants in youth sport and fan events, while thinking of new ways to make a difference. There is definitely more that can be done online as well. And if other corporate teams join the initiative, it will open up new avenues for beneficial activities.

Company athletes need to put on their thinking caps, set their sights beyond the silo of their own sport, and ask themselves how they can become an essential part of their local communities. By actively participating in company initiatives and building stronger bonds with fellow employees, they will make themselves an indispensable part of their companies.

In 2005 the Japan Top League Alliance was established, forming a group of elite sporting leagues headed up by Kawabuchi Saburō. Bringing together 12 leagues representing 9 different sports, the organization encompasses not only corporate sport but also the professional soccer J. League and basketball B League—a total of 310 teams nationwide. It is now time to strengthen such alliances and rebuild for a post-coronavirus world.

(Translated from Japanese. Banner photo: The Onward Oaks football team, disbanded in 2008, collecting signatures in January 2009 in support of the team’s reestablishment. © Jiji.)