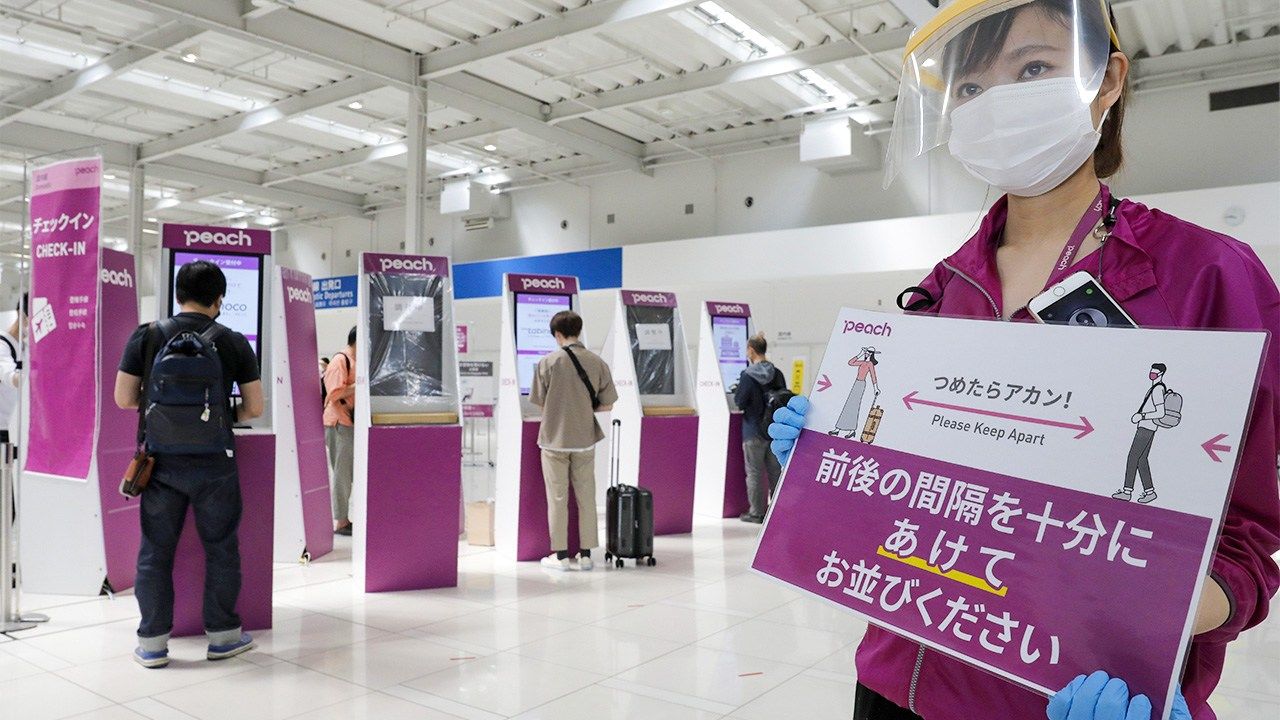 Society Jul 10, 2020
Why is Japan’s COVID-19 death rate so much lower than those of the United States and European countries? The mystery has yet to be solved in medical or immunological terms, but a look at the social aspects does suggest some answers.

As COVID-19 deaths have soared into the tens of thousands in some European nations and over 100,000 in the United States, the count was less than 1,000 in Japan as of early July, a remarkably low number among Group of 7 countries, despite Japan’s aging society and the large high-risk ratio of its population. The country’s low numbers of cases and deaths are puzzling and theories abound as to the cause. The phenomenon may be due to as-yet unknown characteristics of the virus, or perhaps past influenza epidemics have inoculated the Japanese people with sufficient antibodies to fight off the novel coronavirus.

Created by Nippon.com based on data compiled by Johns Hopkins University.

As a scholar of political science, I cannot address the puzzle of Japan’s immunology. But as a social scientist, I can address two more puzzles: the lack of emphasis on “social distancing”—the maintaining of physical distance between people that is considered so important in other countries—and Japan’s poor testing and capacity as compared to other countries. Why is it that despite these factors the virus has caused relatively fewer fatalities in Japan than elsewhere?

Because COVID-19 spreads through respiratory droplets from the mouth and nose, maintaining physical distance is an effective means of avoiding infection. In extreme cases, physical distancing is enforced through lockdowns and by prohibiting people from going out.

Japan, however, has never enforced a lockdown with penalties, even when a national state of emergency was declared on April 15 in an expansion of the state of emergency for Tokyo and six other prefectures declared earlier on April 7. Instead, the government “requested” that people refrain from going out and that restaurants and bars suspend their business, without ever forcing them to close down. This soft approach was enough to achieve a de facto lockdown as people practiced risk aversion rather than bearing responsibility for spreading the virus, and those who feared social sanctions bowed to social pressure.

The “requests” to practice risk aversion helped to accelerate a decline in new infections that had already started before the declaration of a national emergency, but there is no doubt that there was another factor in play as well and this was the call to avoid the “three Cs”: closed spaces with poor ventilation, crowded spaces open to the public, and close-contact settings putting people in range of flying droplets from speaking, coughing, and sneezing. All three of these situations increase the risk of droplet infection, so avoiding them will naturally decrease the possibility of infection. In other words, even if the mandated 2-meter physical distance cannot be maintained, it is still possible to lower the risk of infection by avoiding the three Cs as we continue to go about our daily activities.

Of course, adding physical distancing to avoiding the three Cs will lead to even better results. During the national state of emergency, experts advised reducing daily contact with other people by 80% and many made a special effort to comply. When circumstances required interaction, people still tried to avoid the three Cs, and this proved effective in keeping the number of infections down. Infections among essential workers have also been limited in Japan in comparison to Western countries, which is probably due to avoidance of the three Cs and wearing of masks.

The national state of emergency has been lifted, but heightened awareness of the danger of the three Cs remains and this has helped to curtail any major increase in infections even after the end of the “soft” lockdown. 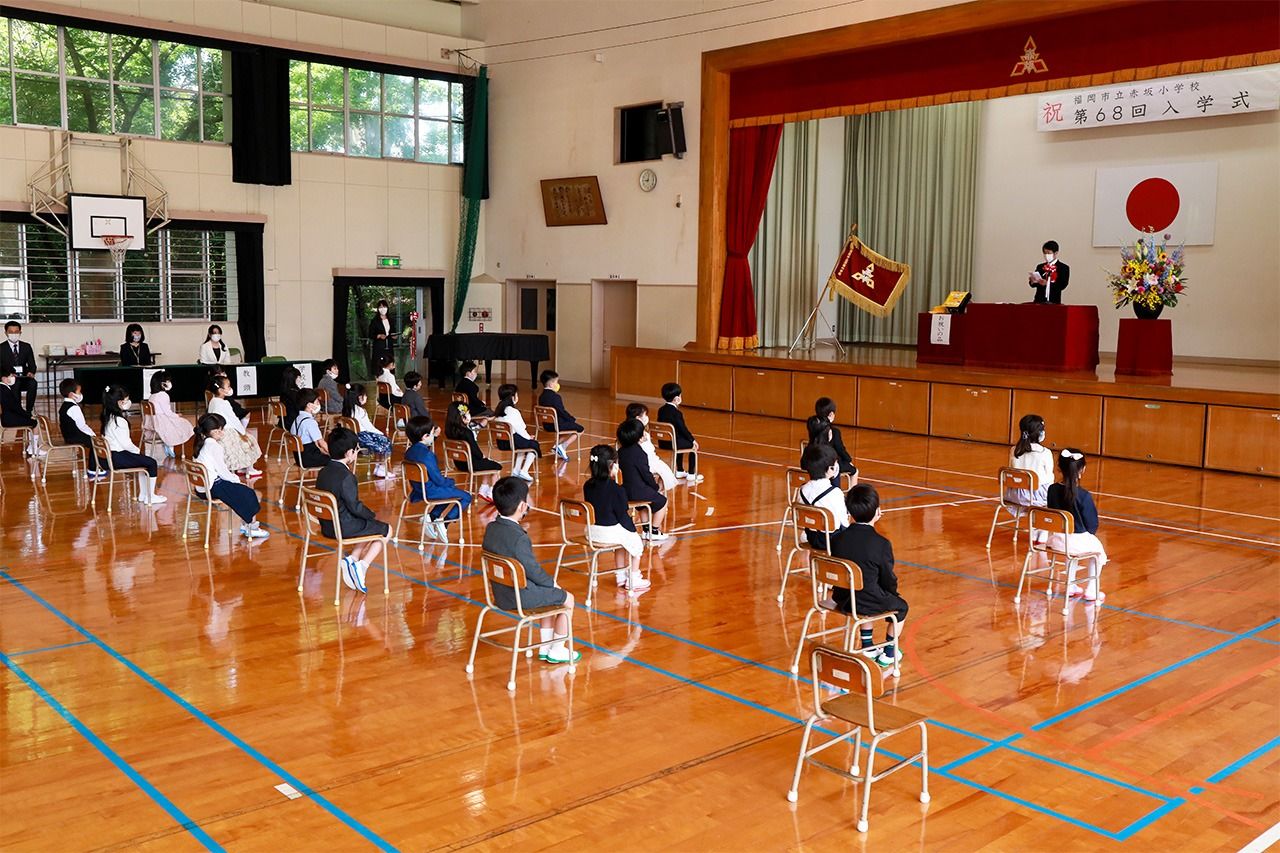 An elementary school in the city of Fukuoka holds its entrance ceremony on June 23 after the national state of emergency is lifted. The ceremony is held at different times for each of three classes. All the first graders wear masks while the sixth graders who usually welcome them are not in attendance. (© Jiji)

Another mystery is the low rate of testing in Japan. Some infected people are asymptomatic. Additionally, the period before the onset of symptoms is when the virus reproduces most and hence is most infectious. It is therefore thought that the disease cannot be eradicated unless it is detected before symptoms appear.

When the coronavirus outbreak began in Japan in January, testing capacity was limited to 1,500 cases a day. This made it necessary to restrict testing to those already showing symptoms, such as a fever lasting more than four days, the objective being to diagnose the disease before it got too serious. People who were not expected to get seriously ill could not get tested, leading to much frustration among those who wanted to know if they were infected. This approach was widely criticized by foreign media. Japan was unfavorably compared to countries like South Korea and Germany that had very quickly made testing widely available and it was even suggested that Japan was deliberately restricting testing to keep its case numbers low so that it could continue on schedule with the Olympics.

There were other reasons, however, that Japan’s testing capabilities did not quickly improve. One concern of the Ministry of Health, Labor, and Welfare and infectious disease experts harked back to the 2009 H1N1 influenza epidemic when patients flocked to hospitals to be tested, and spread the disease as they waited their turn in crowded hospital lobbies. Fear that testing would cause a similar spread of COVID-19 led to the decision to limit accessibility and to require those who might be infected to wait at home.

Another problem has been testing accuracy. Unlike with SARS, which only became infectious after symptoms became apparent, COVID-19 shows a high rate of infection by people who are asymptomatic or whose symptoms are not yet apparent. The only way to stop the spread of the disease is to identify these kinds of patients as quickly as possible. The sensitivity of PCR testing can be 70%–90%, which means a relatively high probability of false positives. The testing would also produce several percent of false negatives. Imperfect testing means that no matter how quickly patients are identified and isolated, there will always be others who go undetected. COVID-19 is extremely difficult to eradicate.

Learning to Live with COVID-19

Given these circumstances, Japan early on decided not to aim for eradicating COVID-19, choosing instead to keep a close watch on the spread of the disease and to take a cluster-based approach in which efforts are directed at detecting and isolating infection clusters. Rather than eliminate the risk of infection, the objective is to stop the spread of the disease to keep the number of patients to a minimum. This helps to alleviate the demand for medical care, maintaining sufficient hospital resources to take care of the most serious patients, and prevents death rates from soaring. The strategy appears to be working and so long as there is not an explosion of cases, will continue to be implemented even as daily infection numbers continue to go up.

This is by no means a hands-off strategy to promote herd immunity. The virus cannot be eradicated, but every effort must still be made to prevent infection. To balance this with the need to sustain economic activity, everyone is being strongly urged to avoid the three Cs, and businesses where people congregate, such as restaurants and retailers, are being asked to implement stringent measures to prevent infection.

As Japanese authorities stay on course with their “requests” for people to self-isolate, businesses have cooperated by shutting down on their own. This strategy is not sustainable, however, and repeated implementation will cause serious economic damage as well as considerable social stress. At present, people and businesses are resuming economic activities while avoiding the three Cs, wearing masks, and ensuring thorough hand hygiene. By implementing these measures, restaurants, bars, and offices are making every effort to avoid causing contagion that will spread the virus.

Needless to say, testing capabilities must be enhanced for early detection of infection and the containment of clusters before they can spread. Currently, it is possible to perform nearly 30,000 tests per day, and just about everyone who may need medical attention can be tested. It is vital to apply thorough testing in professional sports like baseball, where athletes risk infection by coming into close contact with each other, and PCR testing is becoming available to people with no symptoms as required for their jobs and business. Still, given that one person can infect several thousand others in just one day, Japan’s testing capacity is by no means adequate. Continued efforts are need for enhanced testing capability and accuracy.

Learning to live with the novel coronavirus, however, does not mean we must chase after it with blanket testing throughout society. Rather, our focus must be on implementing protective measures in daily life, preventing spread when contagion does occur, minimizing our individual risk of infection, getting tested immediately when we suspect we have been infected, and self-isolating or getting appropriate medical treatment as necessary. We need to also keep track of our own activities and movements so that our contacts can be traced and cluster-containment measures implemented if we do get infected. This is the essence of Japan’s strategies for living with COVID-19 rather than trying to eradicate it, and this explains why Japan has been able to limit its number of cases and deaths even with little testing or stringent implementing of social distancing measures.

(Originally published in Japanese on June 29, 2020. Banner photo: Wearing a face shield, mask, and gloves, a Peach Aviation staff member holds a sign directing passengers to stay a safe distance apart as they line up at the LCC airline counter at Kansai International Airport on June 5, 2020. © Jiji.)