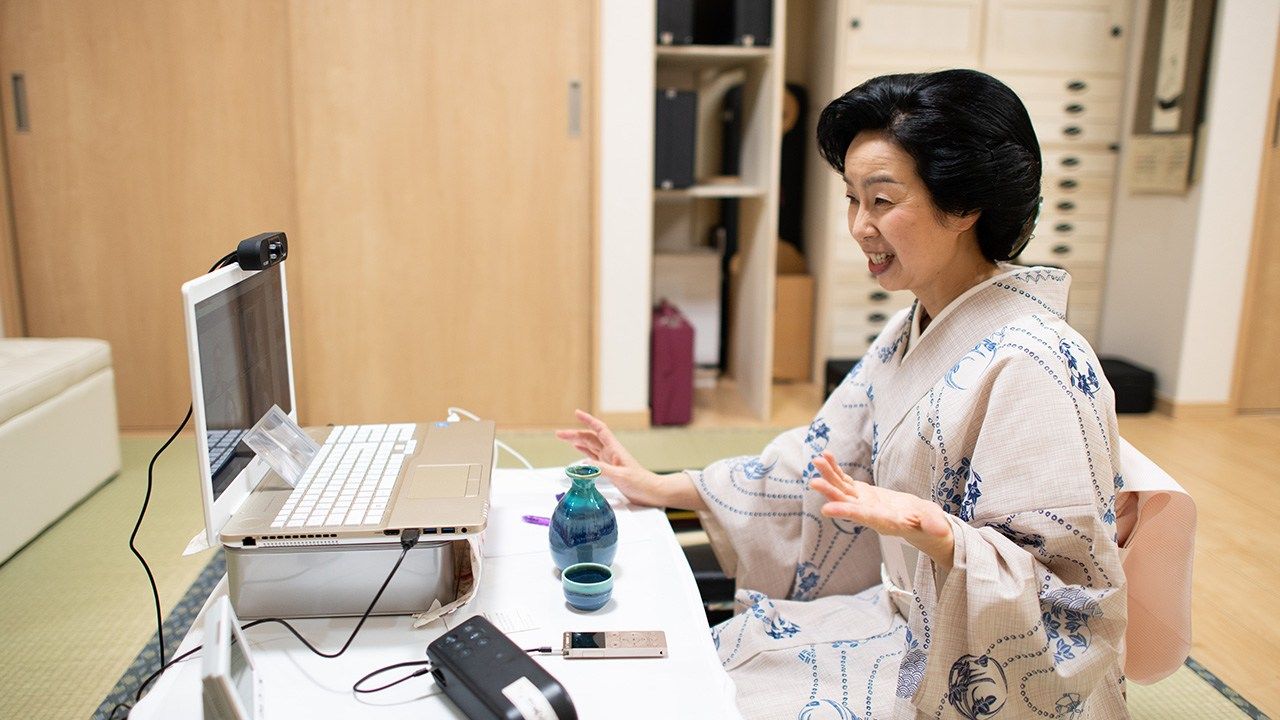 Culture Society Entertainment Health Guide to Japan Jul 20, 2020
A Hakone geisha association has started an “Online Drinking with Geisha” service. The English version has attracted attention from people who wish they could visit Japan or are just interested in its culture.

It is nine in the evening in Japan. Hakone-based geisha Yumiko sits before her computer, with a sake flask and cup, ready to begin an online party. Six groups appear on her screen, and she smiles and greets them all, in Japanese and English. “Where are you all today?”

One couple is in Kentucky, and another in Michigan. An older woman has joined from Massachusetts. Another couple is living in Yokosuka, Kanagawa Prefecture. Apparently, all of tonight’s guests are Americans.

“I lived in Boston when I was young, because of my father’s job. Thank you for joining us so early in your day! First, let’s make a toast!” She takes the sake cup in hand and jokes, “Although it’s a little early for some of you.” The guests laugh, and raise their own drinks, from beer cans to coffee mugs. “Cheers!” “Kanpai!” The party kicks off, with a congenial vibe. All of the interaction is in English, which Yumiko speaks fluently. 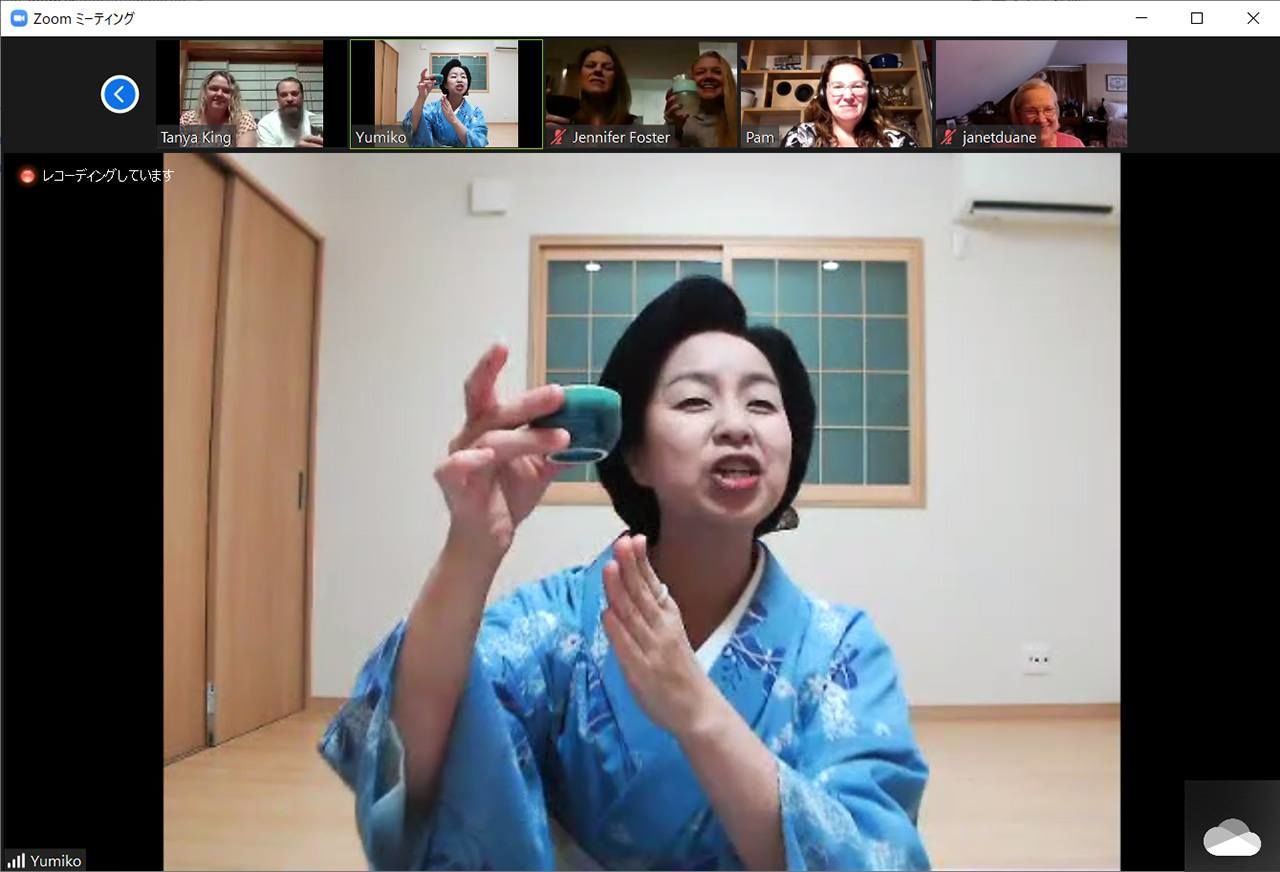 Yumiko raises her cup to lead the toast.

Yumiko is originally from Kyoto. She began Japanese traditional dance lessons at the age of eight, and now holds a shihan (instructor) license through the Sōke Fujima-ryū school. Usually, she does not dance at parties. Instead, as a more experienced jikata geisha, she plays the shamisen (a three-stringed lute) and sings, while others dance. However, for online parties, she performs both roles.

She plays a short love song, “Itakodejima,” whose lyrics extol the beauty of irises in bloom on a riverbank. Next, she takes up her fan to perform a dance. The guests are enthralled by her precise control, even down to the movement of her eyes. 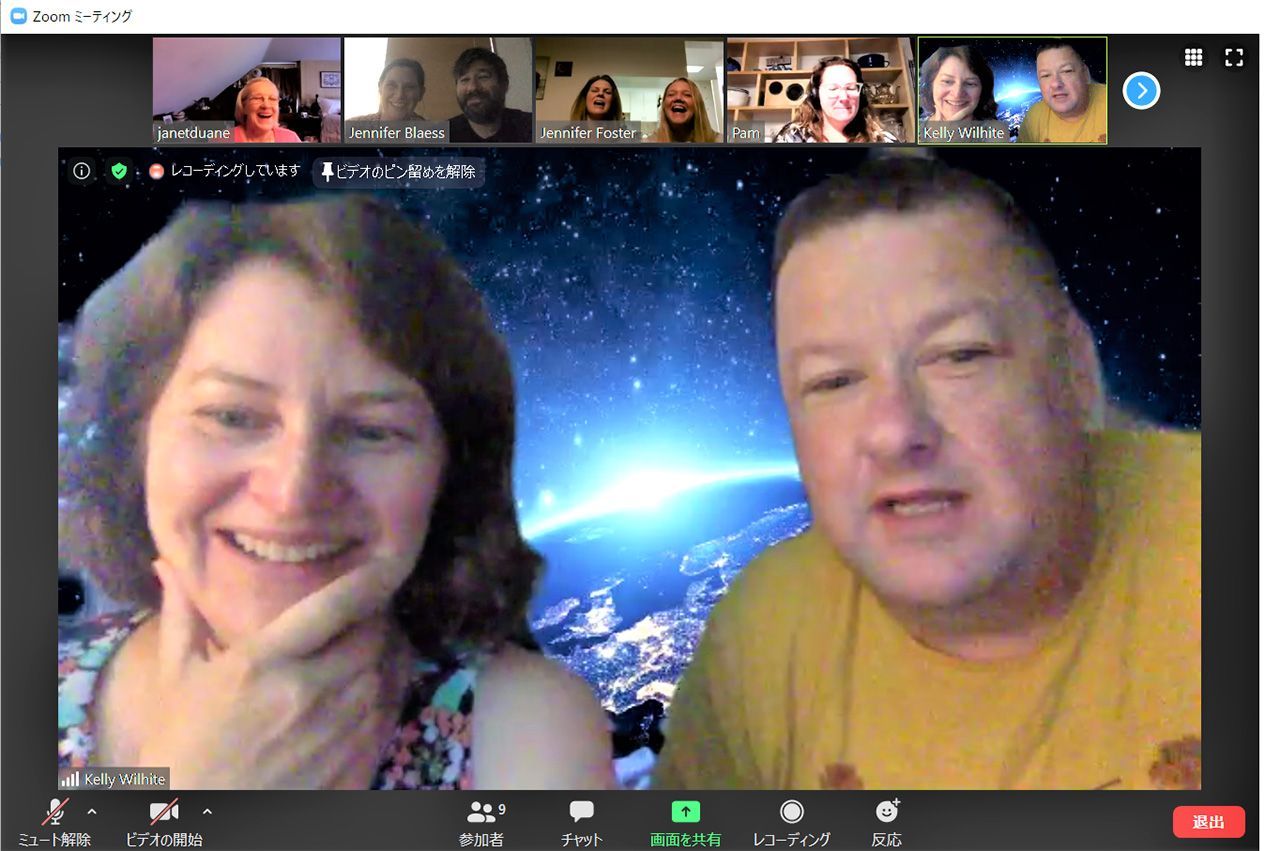 Some time is allocated for questions. “Why did you become a geisha?” “Can you play Western music too?” “Is it true that geisha abide by very strict rules?” Yumiko readily responds to her curious guests.

Next, she picks up her kokyū and draws a bow across the strings. “A Japanese violin!” exclaims a guest. She plays “Sakura Sakura” followed by another familiar tune, “Ue o muite arukō,” by Sakamoto Kyū. “This song was released overseas as “Sukiyaki” and reached number one on the US charts in 1963,” she adds. 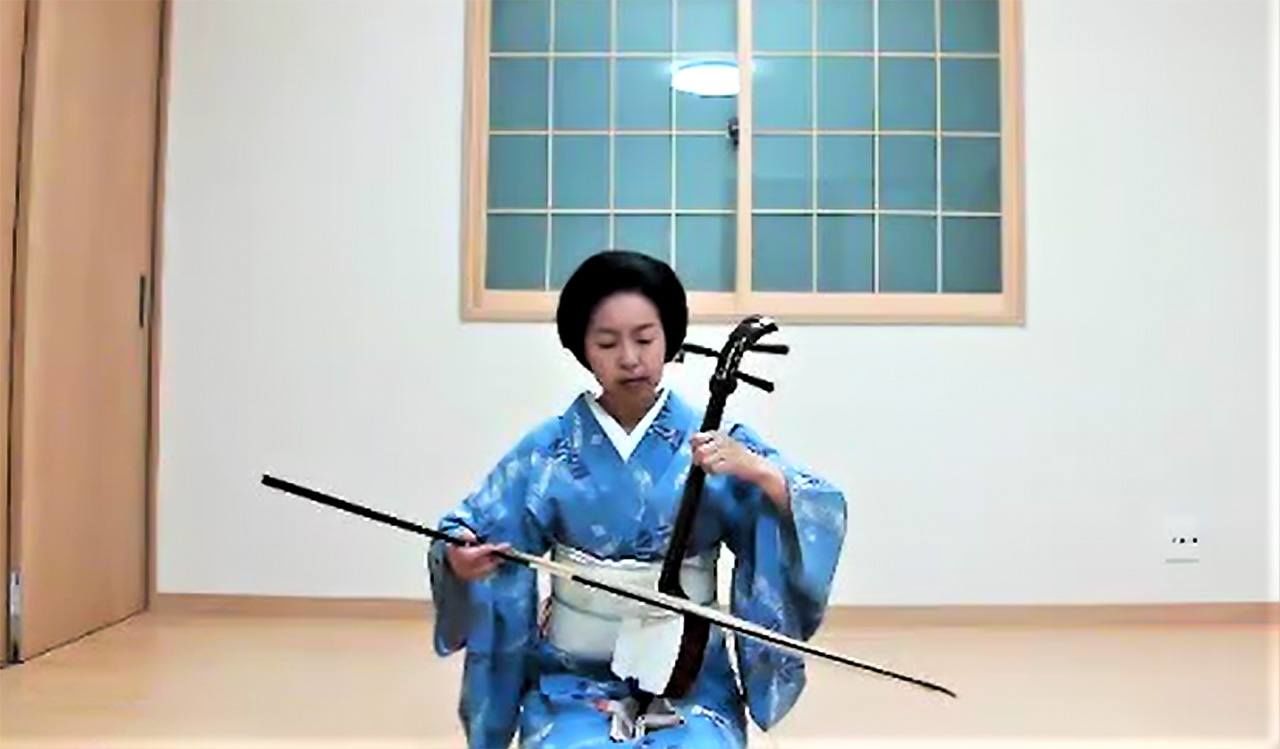 Kokyū players are a rarity among geisha. She often plays tunes from the countries of her guests.

Time flies, and the 30-minute party is soon nearing its end. Yumiko urges everyone to come to Hakone when they visit Japan, to enjoy dancing and singing in person. She bids everyone goodbye, and they each thank her before leaving.

Yumiko graduated from Doshisha University, and worked in translation, interpreting, and counseling before becoming a geisha in Hakone, because she “wanted to play shamisen every day.”

She recounts one tale of guests who were au fait with the world of geisha. The two men, who worked in costuming for the Teatro dell’Opera di Roma, surprised her by asking her to sing “Konpira funefune” so that they could play the accompanying rhythmic hand game between themselves.

An Idea from a New Employee

Hakone is one of the most famous spa towns in the Kantō region. Last summer, Odakyū Hakone Holdings, operator of the Hakone Tozan Railway and Cable Car and other attractions, approached GaiaX to help develop new strategies to revitalize tourism operations, in the lead up to the Tokyo Olympics.

At the time, Nishimura was still a student, in her fourth year at Ritsumeikan University. Having been tentatively accepted to start at GaiaX, she commuted between Kyoto and Tokyo, as a contract worker for the company in inbound-tourism planning and sales. It was Nishimura who suggested focusing on Hakone’s geisha.

She admits that even she was not aware that Hakone had so many geisha. In fact, in a survey conducted in Hakone Yumoto, less than 30% of people knew of the geisha. She learned that, aside from Kyoto, there are still geisha based in tourist destinations such as Atami and Kanazawa, as well as in Akasaka and Fukagawa in Tokyo.

In fact, Hakone has the largest number of geisha of anywhere in Japan—even more than in Kyoto. Around 150 geisha are based in Hakone Yumoto, working for 31 establishments. Despite this, surprisingly few people are aware of their presence. Nishimura realized the untapped potential.

Enjoying the Company of Geisha

While she was a university student, Nishimura had a part-time job at a bar in Gion, Kyoto, managed by a top-class geisha.

“Naturally, I was impressed by their attire and makeup, but what really surprised me was their conversational skills. The charm of geisha is only known to a small segment of society—it’s mainly older men who attend ozashiki parties. I wanted to open up this experience to younger Japanese and non-Japanese people too.”

Nishimura’s plan was to use the geisha studio, or kenban, to produce events featuring dance performance, ozashiki games, conversation, and photo opportunities with geisha. English support was also provided, to be more accessible to foreign tourists. 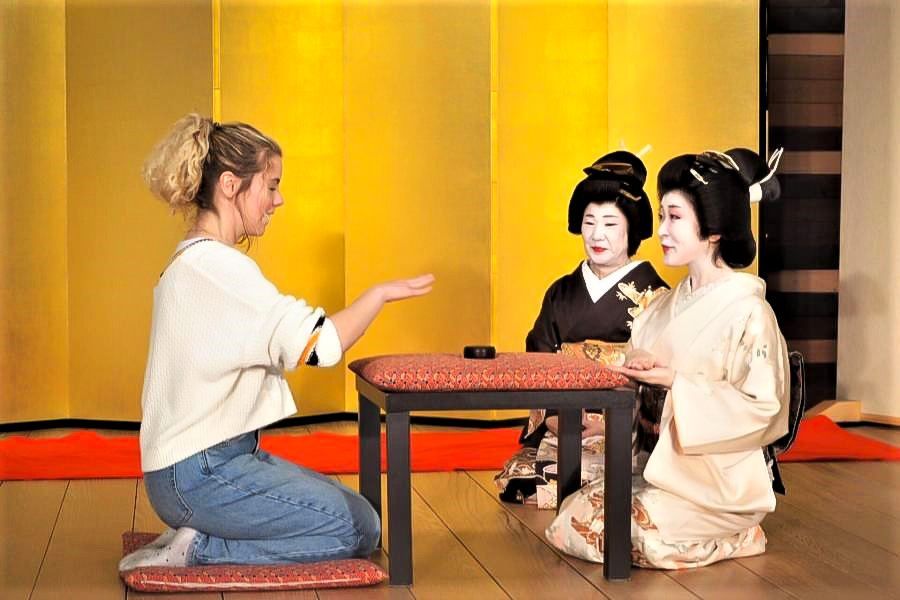 Meet Geisha, hosted in English at the Yumoto kenban, gives guests a taste of an ozashiki party.

When Nishimura first proposed her idea, many geisha raised doubts, and wondered how it would lead to ozashiki bookings. But after she explained it, they saw the opportunity to preserve tradition while also moving with the times. Hakone has many younger geisha—over half are in their twenties, making them more open to innovation.

The average age of geisha in Hakone is 28, far younger than in other areas in Japan.

Meet Geisha met with great success. However, within three months, the COVID-19 pandemic hit Japan, and the events were canceled. Bookings for geisha vanished, and so did their incomes.

What began as a PR idea for the geisha led to the birth of Japan’s first online geisha drinking parties.

The website debuted on May 22, accepting reservations from Japan. Slots booked out almost immediately. Three days later, the story was picked up by foreign media, and requests were received for parties in English. One family, with members living in three countries, hoped to hold an online birthday event for their brother. Plans were hastily made to arrange English-speaking parties.

Geisha themselves jokingly mourn the fact that they are an “endangered species,” as numbers continue to dwindle. The work volume is around 20% of pre-war levels, and there are 70% fewer geisha. The latest pandemic has turned the screws even tighter.

Many in Hakone feared the pandemic could be the death of ozashiki culture, but by acting now, perhaps they can save it. It requires a new approach, and reaching out to new clientele. Nishimura’s concept transforms the core role of geisha from being party attendants, to focus on their performance, through dance, music, and conversation.

Most online party participants have never met a geisha before. Many are younger women, and some customers have their children with them. Complete strangers often become friends through the events. There have been repeat customers, and group reservations. While live events have resumed, moves are also afoot to refine the online parties based on customer feedback.

(Originally published in Japanese. Banner photo: Yumiko chats with her online guests. Sachika, a geisha for 20 years, is also fluent in English, while 10 other geisha also do English online party work with the aid of interpreters. Banner photo courtesy of Richard Atrero de Guzman. Other photos courtesy of GaiaX.)