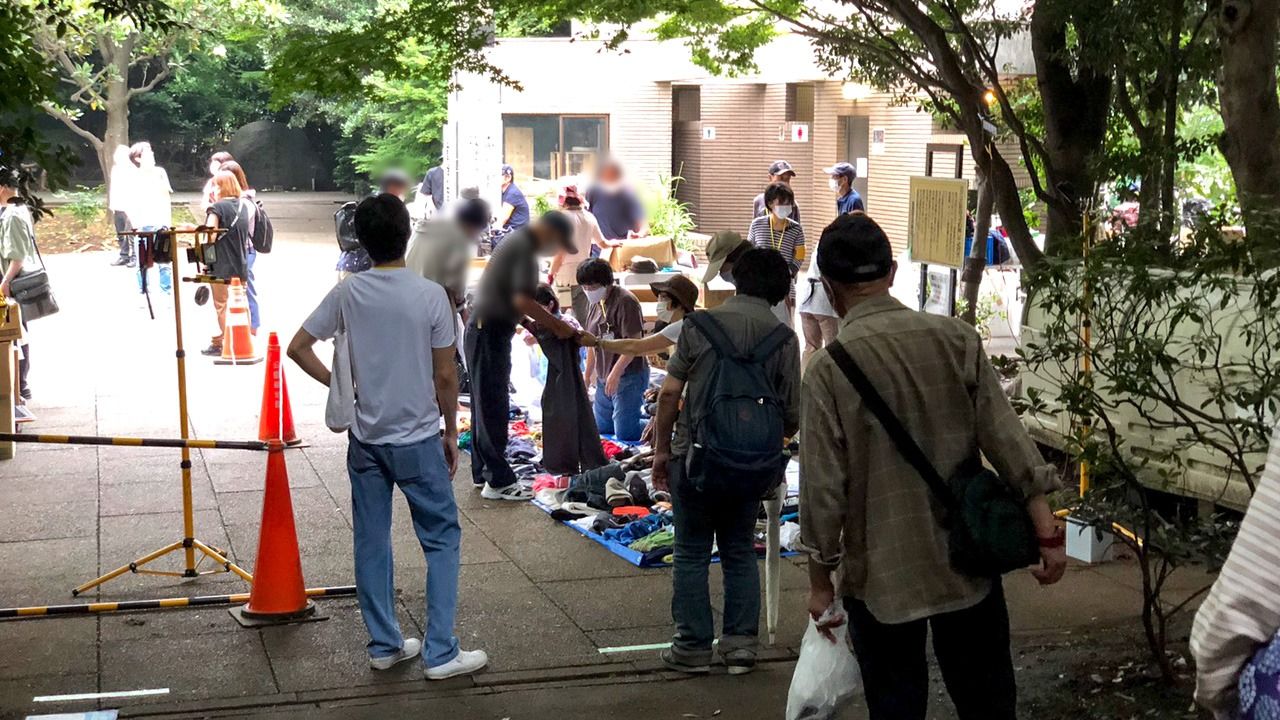 Economy Society Health Work Aug 12, 2020
The COVID-19 pandemic has put the disadvantaged in particular danger. Among those, many “net café refugees” are at risk of losing both their residence, and their jobs, due to business restrictions caused by the pandemic.

A Storm Blows In

The nonprofit organization Tenohasi offers support for the homeless in Tokyo’s Ikebukuro district. Their primary activities include a twice-a-week meal service (replaced by bentō distribution during the pandemic), lifestyle counseling, and a night patrol every Wednesday where staff check up on those sleeping on the streets and pass out onigiri rice balls and informational pamphlets. 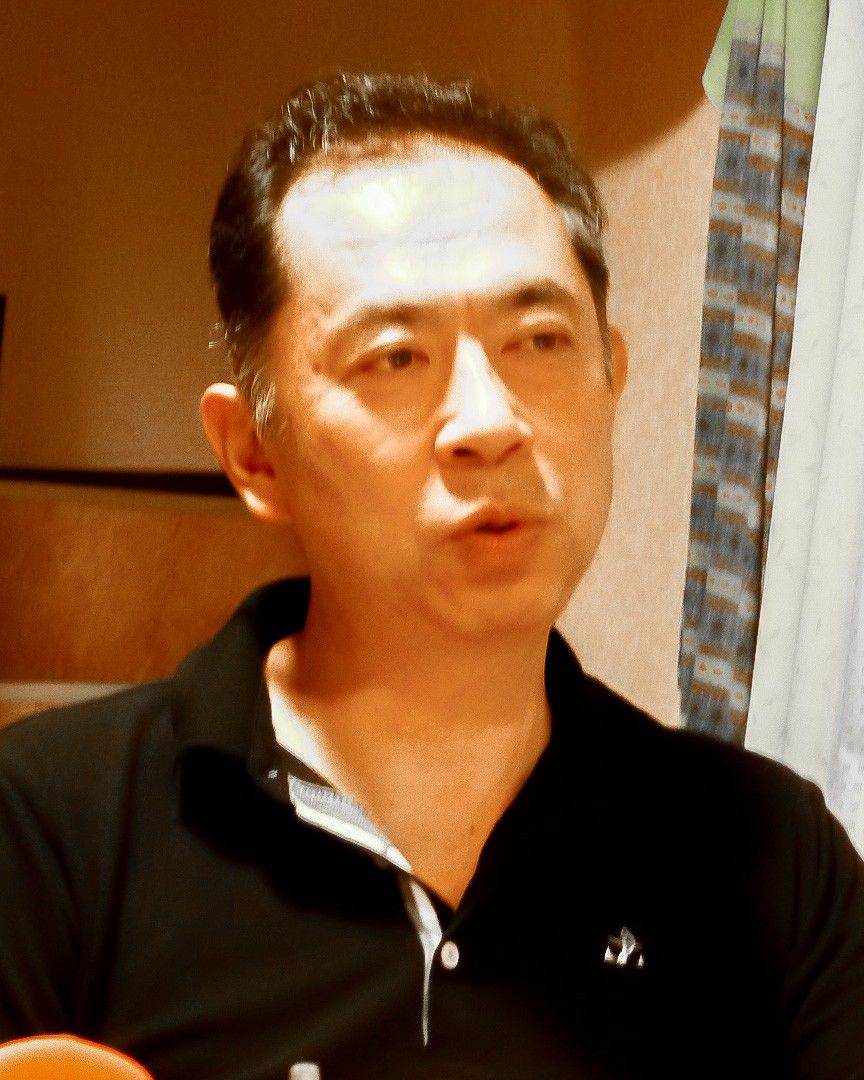 Recently, the number of people living on the streets had been in decline, but Tenohasi’s Executive Director Seino Kenji says, “In March, it was like a storm blew in.” The COVID-19 pandemic brought economic activity to a near halt, and people taking advantage of the meal distribution service began to increase that month. In April, the first session had over 200 people, and in May the number surpassed 260. The group also had 80 consultation requests from April through the first half of June—three times as many as in the same period last year.

In addition to older people who have been on the streets for years, Seino describes with surprise the unprecedented appearance of younger “internet café refugees”—people without a stable residence who rely on inexpensive net cafés as a place to sleep and shower—using the NPO’s services. Drastic drops in day-labor demand in the construction sector and in temporary dispatch work have increased the number of those in need, and April’s declaration of a coronavirus-related state of emergency included closure requests for net cafés. People staying there had no choice but to leave.

On our June 27 visit to the meal distribution center in East Ikebukuro Central Park, the line stretched long a full hour before its opening at 6:00 in the evening. The crowd included men and women alike, and many people in their twenties and thirties. There were also many people who went through the line twice, leaving with their hands full of bentō meals. The consultation area and traditional acupuncture area were also crowded.

A man who recently came in for consultation had been staying at a net café while working at a facility loading recycled appliances into containers headed for Southeast Asia. In February, he was promised ¥10,000 a day, three days a week, but from March his work was reduced to one day a week. The company’s trading partners began performing stricter inspections as the pandemic continued spreading in Japan, and the overall market began to suffer. He also held construction jobs at the same time, but with the concurrent drop in that industry, his monthly income fell to ¥65,000 in May.

Net café refugees tend to hold unstable, low-paying day-labor and temporary jobs while staying at 24-hour net cafés, which cost an average of ¥2,000 a day. Tokyo is estimated to have about 4,000 such people, and a portion of those forced to leave by business restrictions have relocated to business hotels rented by the Tokyo metropolitan government as replacement housing from April. According to the city, about 1,200 people have taken advantage of the program so far.

I accompanied Tenohasi staff on their night patrol on June 24, and around Higashi-Ikebukuro we found 16 people or so staying hidden in the sheltered spots near the park, under overpasses, and under stairwells. There was only one younger person, however. Clearly, though, some net café refugees have taken to the streets. 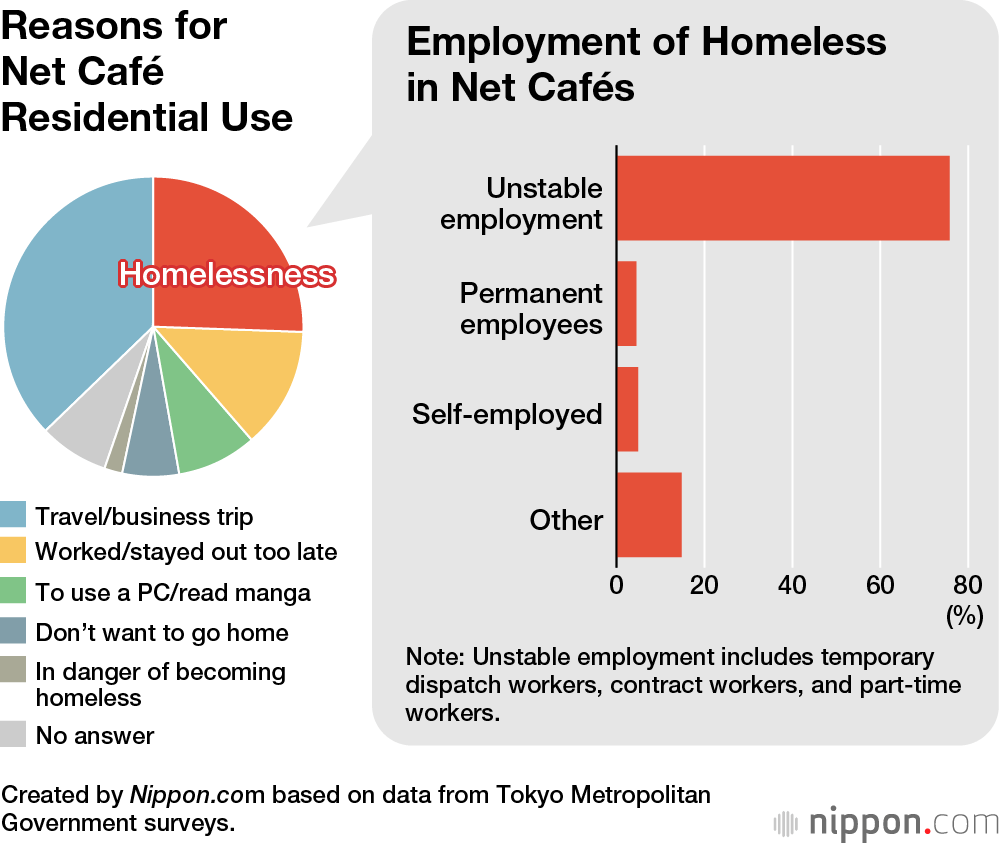 The man mentioned earlier, who had worked loading recycled appliances and in construction, has also been staying for free at a Toshima business hotel. Securing free housing has been essential in living on his reduced daily budget of around ¥2,000 a day, which now can cover food, public transportation to work, and the cellphone he needs to search for work each day.

However, those in need were only allowed to stay at the business hotels until July 1. Where did they go after that? We don’t know.

Welfare Assistance Out of Reach 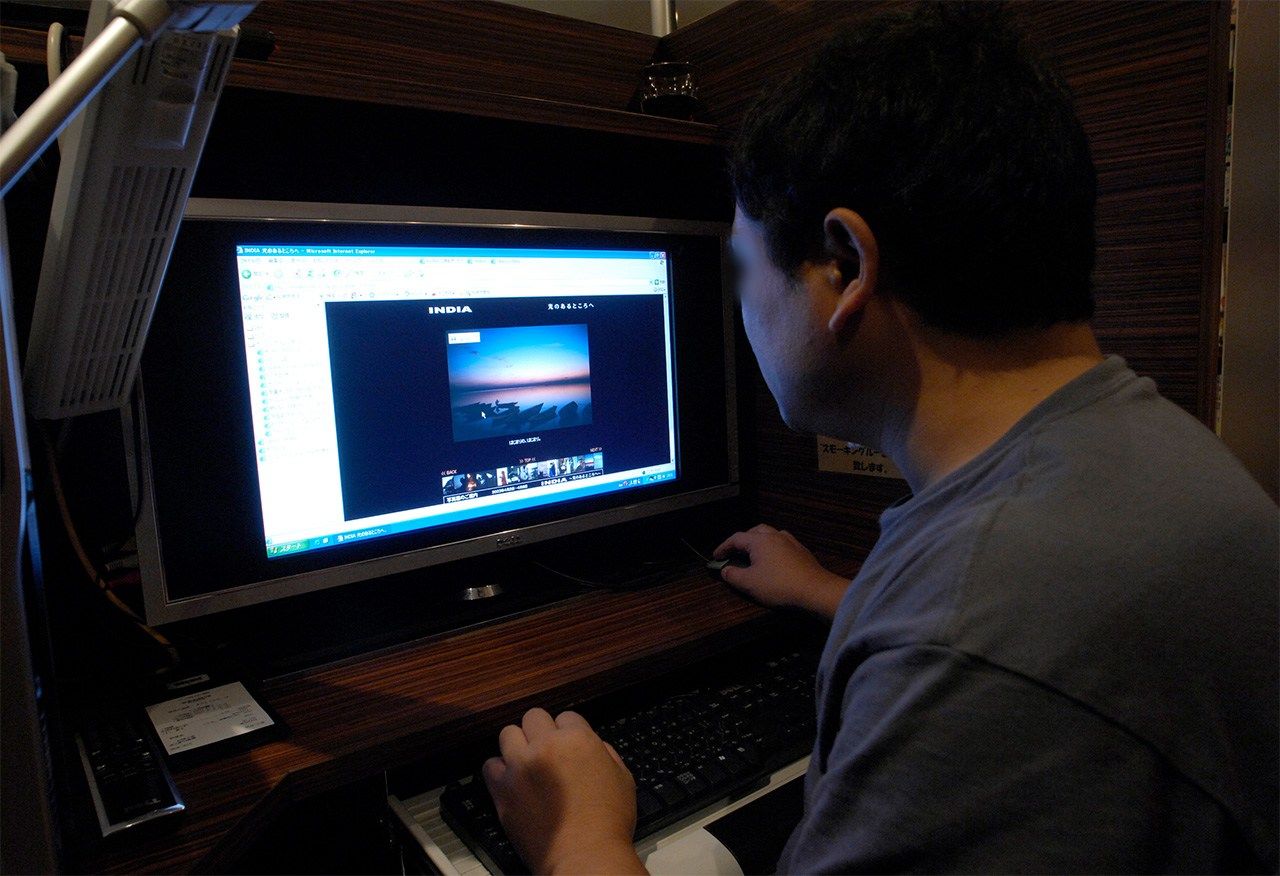 The business hotel rentals were always a temporary solution, and so no one could use them for official residential registration. Since receipt of government support, including the special cash payments of ¥100,000 per person or housing security benefits, requires an address on the basic resident register, Seino says, “Those who need the money most will find it out of reach.”

The application deadline for the ¥100,000 payments is the end of August. How many of these needy people will be able to obtain a permanent address and get on their feet by then?

Working conditions have also deteriorated. According to the labor standards law, anyone who loses work due to pandemic control measures is entitled to a stipend equaling at least 60% of their salary, but all too often temporary dispatch and day labor workers fall through the cracks.

Lawyer Inomata Tadashi, an expert on labor issues, says: “Temporary employees are given an idea of work coming up, but if employers suddenly announce ‘the work’s gone, so you don’t need to come in,’ they should be required to take responsibility and offer compensation. And dispatch employees should be offered forced-leave stipends.”

A Ministry of Health, Labor, and Welfare survey shows that as of June 26, 9,009 irregular workers have lost work due to the COVID-19 pandemic. That is an increase of 380% from the figure on May 29, when the survey was first implemented. Many dispatch contracts are renewed in three-month increments, and there has been an increase in contracts being cut off at the six-month mark. 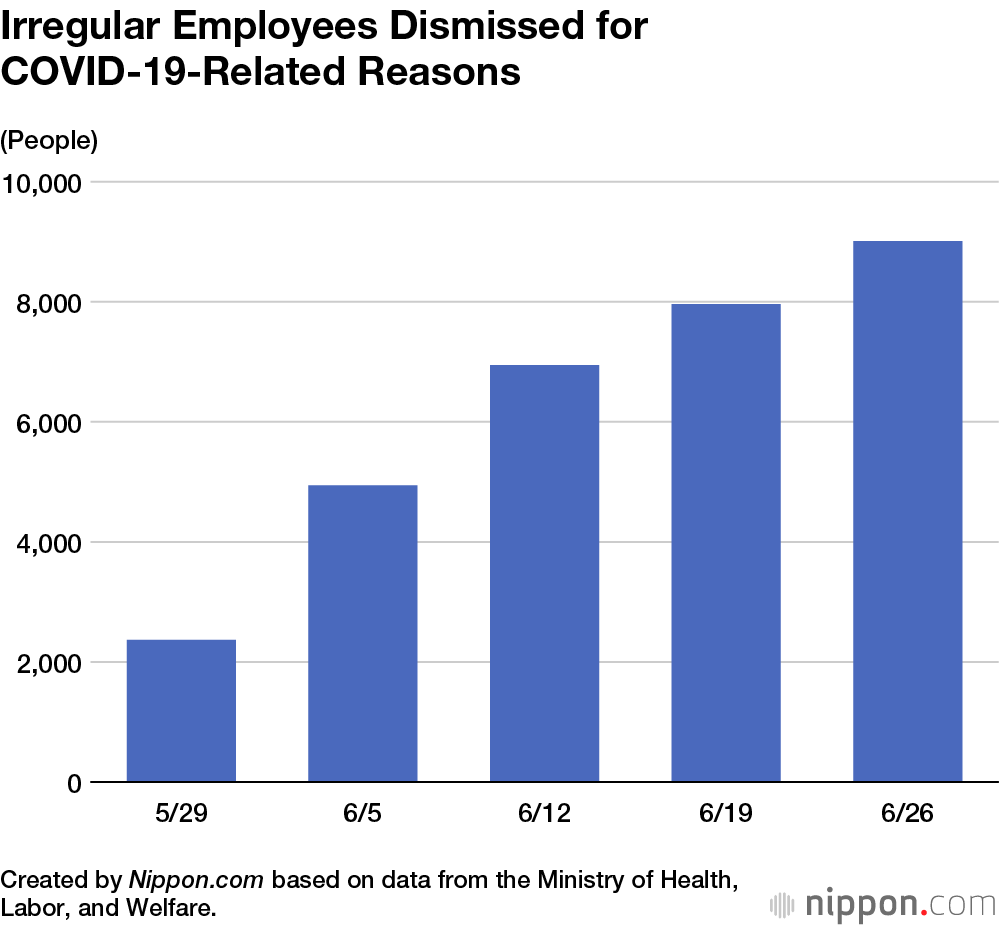 The time limit for some of the hotels rented by the Tokyo government has already ended, and as time goes on the remaining hotels will be shutting their doors to these temporary residents one by one. Will the needy be able return to their net cafés, or will they be forced to wander the streets? Seino says that many are still waiting for the work situation to recover, though this remains a distant prospect. Rather than returning to the net cafés, it would clearly be best if they got public assistance to aid them in renting an apartment and starting the search for proper work. Seino himself is assisting many of the needy in applying for public support, but the process is not an easy one..

Receiving public assistance requires a procedure called a fuyō shōkai (inquiry of dependents) to confirm whether any family members can provide financial support. This means that the public office will inform the applicant’s family of the application, which many find an unpleasant thought. Many applicants themselves believe that being on welfare is shameful, and so don’t want their families to know. There may also be family issues that come into play. 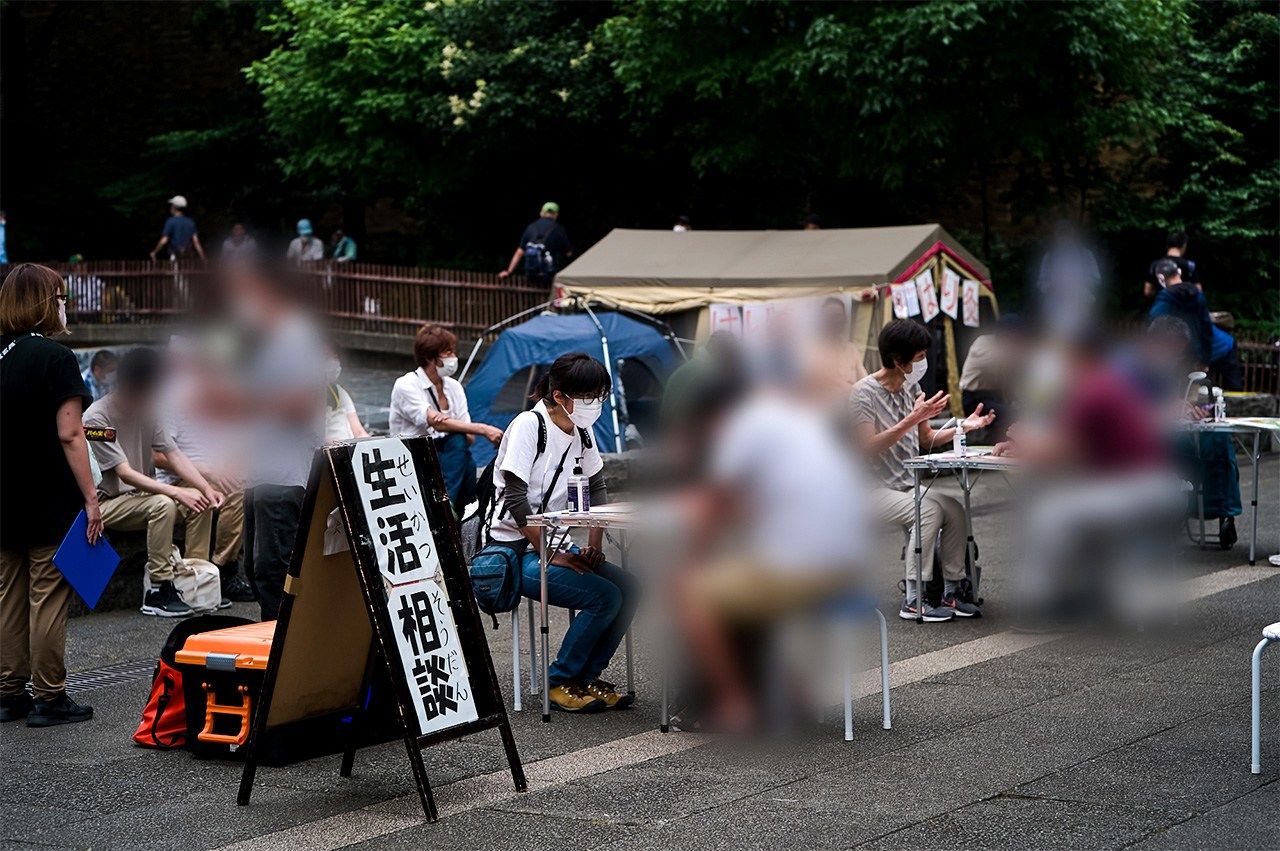 A free counseling area set up by Tenohasi. (© Koishi Kazuo)

We talked to a single woman in her forties who stayed at a net café and was once a dispatch employee working in logistics. Her work dropped off from April, but now she has finally been able to take residence in a house rented by the metropolitan government. She hesitated over applying for welfare until just before the deadline because of family concerns. Her original reason for leaving home and staying at a net café was trouble with her family, and she wants to avoid letting them know about her situation at all costs. A Tenohasi counselor took her concerns to heart, and reasoning that the dependent’s inquiry requirement may be dropped due to reasons of abuse, helped her explore her options to find a strategy for safe application, including on grounds of psychological abuse.

A Safety Net in the COVID-19 Crisis

One more major barrier is the social stigma around receiving welfare assistance. A common opinion is that welfare recipients are not interested in work, and just want to live off of the taxes of others.

Ozasa Miwa, an inheritance and elder-care consultant with experience working at a ward office in Kyoto, says that this is not true. “There are many who are unable to work on health grounds, though that may be hard to recognize at first glance. Usually such people want to be able to work and support themselves without depending on welfare.” Yet prejudice against welfare recipients continues to grow, despite actual incidents of abuse of the system being incredibly rare.

As the pandemic drags on, and a second wave is expected to hit Japan soon, it seems likely that the number of those needing public assistance will continue to increase. “Temporary workers are easiest to let go, and even if they work at large companies there’s no guarantee they won’t be laid off. There’s a growing sense of strong unease as people don’t know when, where, or how their job will end. The need for welfare assistance as a social safety net is real, and that need will only grow,” Ozasa says.