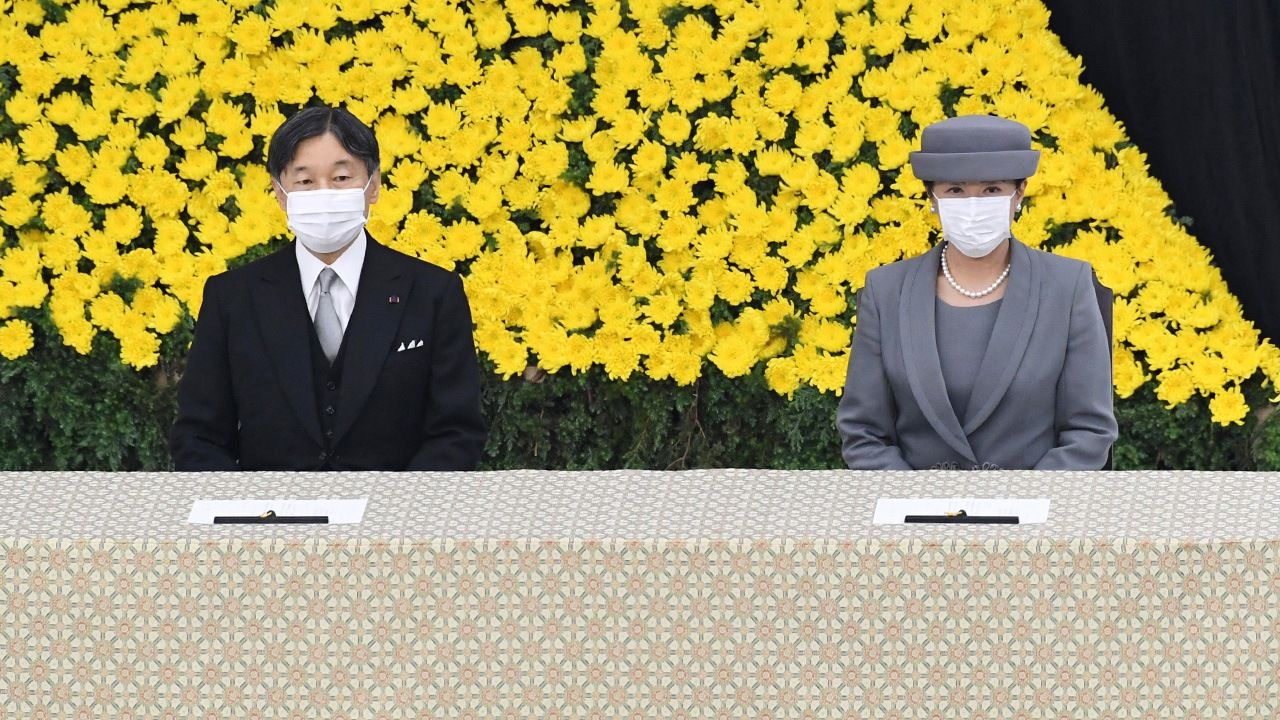 Imperial Family Society Health Culture Oct 1, 2020
Emperor Naruhito spoke of the COVID-19 pandemic at a ceremony marking the anniversary of the end of World War II in August. While some had hoped he would play a more active role in addressing the people during the health crisis, he appears to have held back over concern about becoming involved with politics.

The COVID-19 pandemic meant that Japan’s National Memorial Service for the War Dead—held in Tokyo each year on August 15, the anniversary of the end of World War II—was very different than normal in 2020. There were just 540 participants, or less than 10% of the total last year. Emperor Naruhito and Empress Masako were wearing masks, and the national anthem was performed instrumentally only, without the usual singing.

Most unusual of all was the emperor’s speech. Amid the mourning for the dead, expressions of sadness for their surviving family members, and regret for and renunciation of war, he made a topical reference to the ongoing health crisis.

A contact in the Imperial Household Agency spoke to me of Emperor Naruhito’s concern for the people of Japan, and indeed the entire world, at a time when there is no end to the pandemic in sight. “The emperor sought an opportunity to speak to the people from early on, and when it finally came, he added his own personal touches to the speech prepared for him.”

Emperor Naruhito’s comments included the following. “While we are currently confronted with the unprecedented difficulties caused by the spread of the coronavirus disease . . . I sincerely hope that we all work together hand in hand to overcome this difficult situation and continue to seek happiness of the people and world peace.”

The message of coming together to battle the virus is warm and powerful, and it is skillfully woven into the speech, so it did not sound unnatural on the occasion of the ceremony. 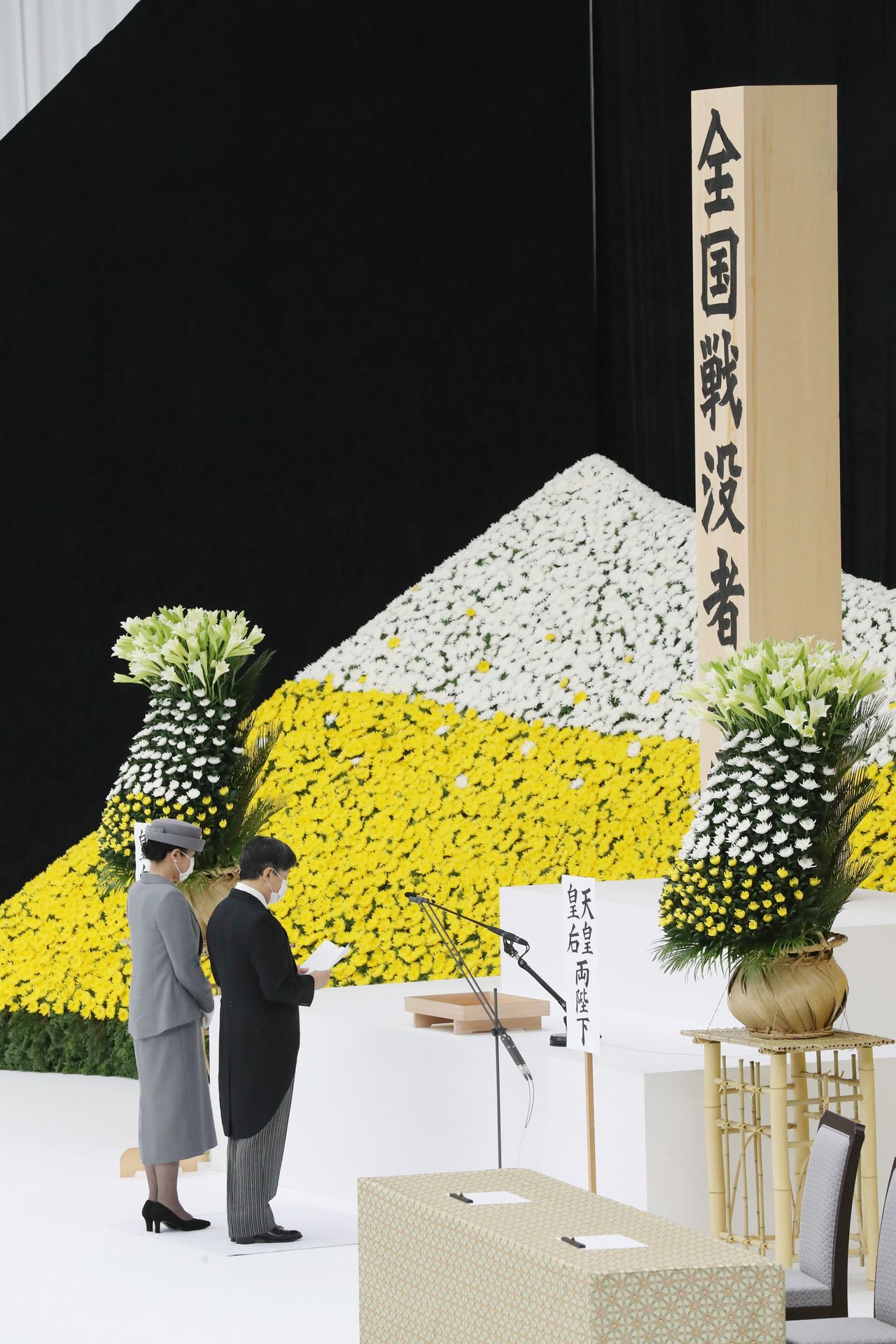 Emperor Naruhito and Empress Masako at the memorial service. (© Jiji)

Six months had passed since the emperor appeared at a ceremony outside the Imperial Palace or Akasaka Estate. Everything had been going well through last autumn’s enthronement ceremony and imperial procession, the New Year address to the public, and the New Year’s poetry reading, which Empress Masako attended for the first time in 17 years. Then came the COVID-19 outbreak.

Having completed events related to the succession in the first year, from the second year of the new era the imperial couple had planned to make as many regional visits as possible, so as to meet large numbers of citizens. However, all such trips this year were postponed, and it remains impossible to draw up a schedule for next year. The emperor and empress had greatly wished to visit areas affected by disaster, but here too they have faced insurmountable obstacles.

Some in the IHA have noted the difference compared with times in the Heisei era (1989–2019), when Naruhito’s father Akihito, despite his advanced age, would always quickly visit areas where disasters took place and offer words of comfort to the local people. There is concern that the emperor’s symbolic role may be seen as fading in importance.

The imperial couple have started initiatives like inviting experts on matters related to COVID-19 to meetings at the Imperial Palace. At the first of these on April 10, they heard from Dr. Omi Shigeru, who was then vice-chair of the government’s expert panel on the coronavirus. There have been 12 of these meetings as of mid-August. 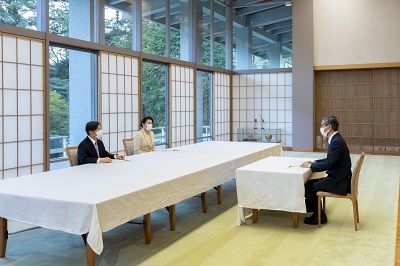 At the April 10 meeting, Emperor Naruhito said, “The current pandemic is a great test for humanity as a whole, and has placed the lives of many people in Japan at risk. This makes me keenly aware of the difficulties that so many people are facing.”

When meeting Japanese Red Cross Society President Ōtsuka Yoshiharu on May 20, the emperor praised the great efforts of medical workers while there were equipment shortages. He showed concern for their health too, as well as about prejudice that had been expressed toward people in such positions. This was a way for him to indirectly admonish those citizens who had discriminated against key medical workers.

Hopes for a Speech

Under the Constitution, the Japanese emperor is forbidden from involvement in politics. However, political scientist Mikuriya Takashi wrote in the Mainichi Shimbun on May 1 that at a time of national crisis, it was legitimate for the emperor to express his worries over citizens’ lives. He suggested that a stronger method like a video message would also have been reasonable.

Five days after the Great East Japan Earthquake in 2011, then Emperor Akihito spoke to the nation through a video message. “It is my sincere hope that those who have been affected by the disaster will never give up hope and take good care of themselves as they live through the days ahead, and that each and every Japanese will continue to care for the afflicted areas and the people for years to come and, together with the afflicted, watch over and support their path to recovery.” When Japan entered a nationwide state of emergency on April 16, some hoped that Emperor Naruhito would make a similar statement.

European monarchs had given a number of speeches encouraging their citizens during the pandemic from the middle of March onward, so it may have appeared natural for Emperor Naruhito to follow. 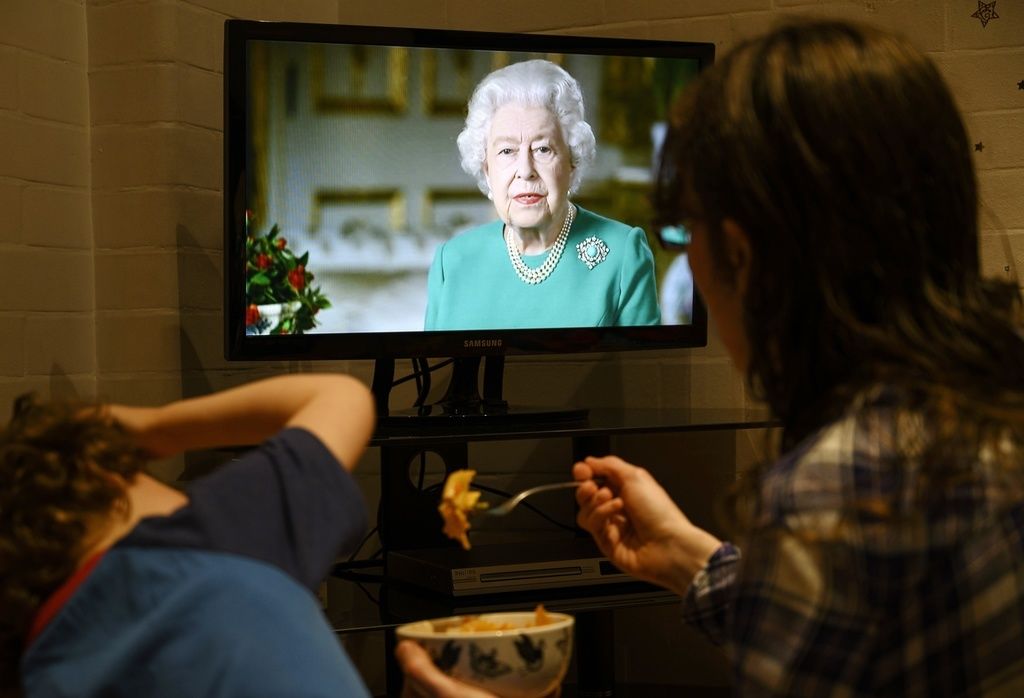 In Britain, Queen Elizabeth II spoke on television on April 5. She thanked health workers and others carrying out essential roles, as well as those people who were staying at home. “Together we are tackling this disease, and I want to reassure you that if we remain united and resolute, then we will overcome it,” she told citizens. “We should take comfort that while we may have more still to endure, better days will return,” she also said.

Elizabeth II has reigned for 68 years, but this was the only fifth time she gave such a speech apart from regular Christmas broadcasts. More than a third of the British public tuned in.

Compared with the activities of European monarchs and royal families, Emperor Naruhito did not directly address citizens between his birthday press conference in February and the National Memorial Service for the War Dead in August. Some Japanese magazines wrote of “the emperor’s silence.”

There has been much political debate about how the national government and local authorities should tackle COVID-19. This political aspect appears to have held back Naruhito from commenting, based on the Constitution’s Article 4 saying that the emperor “shall not have powers related to government.” He has a tendency to listen to those around him, and as he has only recently ascended to the throne, this may have been why he hesitated.

At his birthday press conference, he said of the role of the emperor that it was important to adapt to changes in society and the era. Based on this thinking, he added words to his memorial service speech. The day when Emperor Naruhito can directly meet with large numbers of citizens is still far off. If the COVID-19 situation deteriorates again, how will he reach out to speak to the nation? This question could be of great significance in setting the tone for his reign in the Reiwa era.

(Originally published in Japanese on August 21, 2020. Banner photo: Emperor Naruhito and Empress Masako at the National Memorial Service for the War Dead in Tokyo on August 15, 2020. © Jiji.)