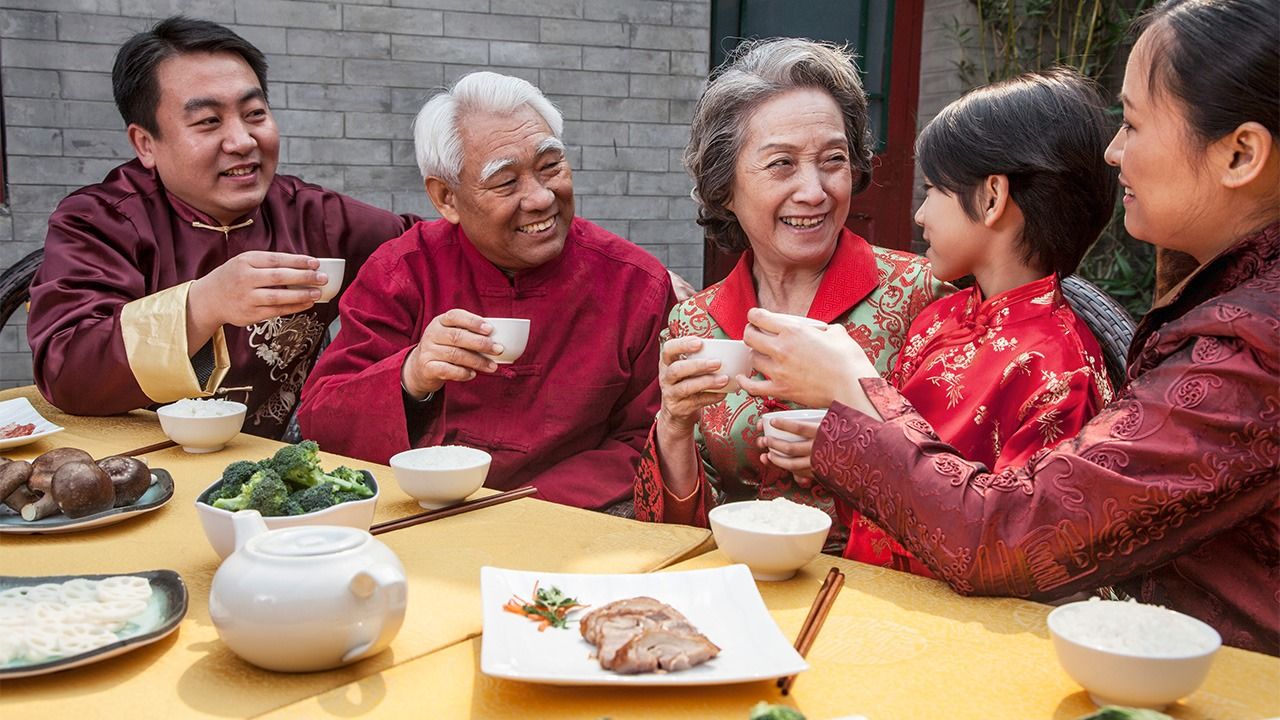 Society Health Economy Nov 24, 2020
East Asia has so far evaded the worst of the coronavirus pandemic, sparking speculation that the region will emerge ahead of the West to dominate the post-COVID era. However, the author warns that demographic trends driving population decline threaten the longer-term wellbeing of Asian economies.

The pandemic has touched every corner of the globe, claiming the lives of over 1 million people and infecting tens of millions more. As the health crisis has progressed, East Asian countries have been better at containing the spread of the virus than many Western nations, where repeated outbreaks have forced governments to initiate economically debilitating lockdowns.

All eyes were on China in the early stages of the crisis when the government took swift action to contain the spread of the virus within its borders by sealing off Wuhan, the epicenter of the outbreak, and ordering residents of the city to remain indoors. The move, combined with a slew of strict social measures, kept the death count from exploding. To date, China has suffered less than half the COVID-19 fatalities as Germany, a country lauded for its response efforts in coronavirus-ravaged Europe.

Taiwan and South Korea were similarly quick to respond and have garnered international attention with measures that rely heavily on IT tools to track infection clusters. Japan has also been able to stave off the worst of the virus and keep its fatality rate far below that of other G7 nations.

Some experts argue that the success of China and its neighbors in slowing the spread of the virus without resorting to costly shutdowns gives these countries a leg up in getting their economies back on track once the crisis subsides. Some even go as far as to predict that this will propel East Asia to dominate the post-COVID economy. However, such rosy predictions of a dawning of a new “East Asian era” may be premature in light of the ticking demographic timebomb that looms over the region.

Japan with its aging society and anemic birth rate exemplifies the problem. The number of babies born in the country each year has been declining for decades. Provisional demographic statistics for 2019 by the Ministry of Health, Labor, and Welfare show births fell some 50,000 from the previous year to 865,000, marking the only time since records were first kept in 1899 that fewer than 900,000 births were recorded. 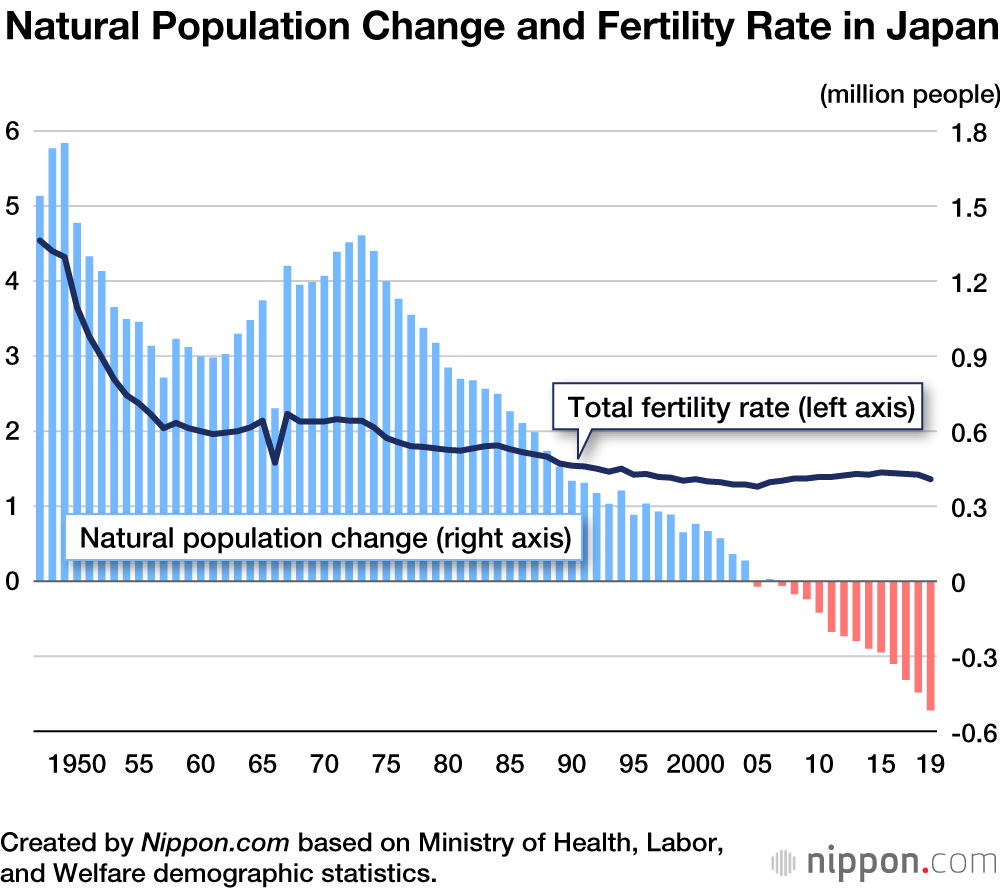 In 2007, the country hit a grim milestone when the annual number of deaths surpassed births, putting the population on a steady downward track. There were 1.38 million deaths in 2019, and by subtracting the number of births, overall decline in the Japanese populace was around 500,000 for the year. This was mitigated to a degree by the some 200,000 foreigners who moved to the country, bringing the total drop in population in 2019 to 300,000.

The current health crisis has only heightened the factors driving population decline. Japan’s already low fertility rate is expected to drop further as the pandemic strains the economy and the government’s travel restrictions have drastically reduced the number of foreigners moving to the country. Combined, these paint a gloomy demographic picture heading forward.

The situation is hardly any better in neighboring South Korea. In 2019, the country’s total fertility rate, or the average number of children born to a woman during her lifetime, stood at 0.92. This is far below even Japan’s meager score of 1.36 and puts it in last place among OECD nations. A TFR of 2.1 is needed to maintain the population at a steady level.

After years of decline, births finally fell below deaths in November of last year, pushing natural population change into negative territory. The nation’s birthrate for the first half of 2020 has dropped by around 10% year-on-year, dragging the TFR for April to June down to 0.84 and solidifying South Korea’s status as a shrinking country. The problem does not stop here, though. According to national demographic statistics, the ratio of elderly population, those 65 or older, is on track to overtake that of Japan, reaching an estimated 46% of the total population by 2065.

Taiwan is also facing demographic woes. For starters, the country’s TFR hovers around 1.0, well below replacement level. In 2019, the population grew by some 2,000 people, but during the first half of 2020 deaths have outstripped births, which fell by 6,000 compared to the same period the year before. In light of these developments, the National Development Council in August adjusted its prediction for when the country would begin shrinking by two years, announcing that the population was now in decline after peaking at 23.6 million in January 2020. 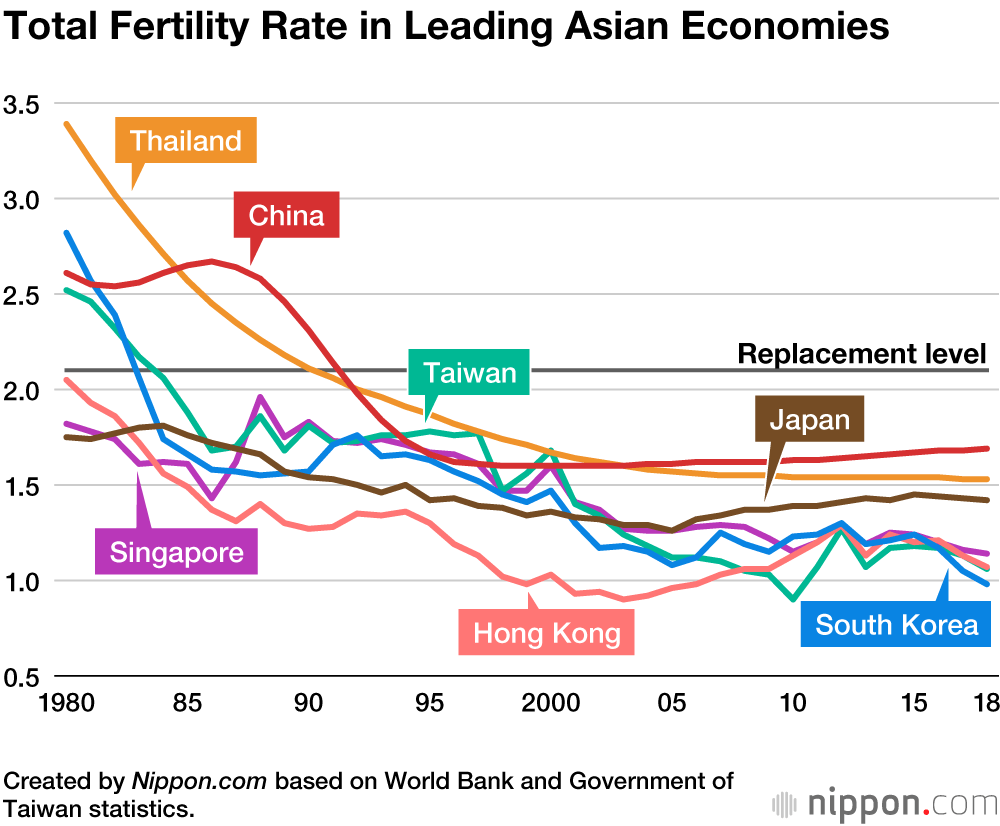 The prevailing view is that East Asia is destined to become the engine of global economic growth, an idea that began with Japan’s rapid postwar development during the latter part of the 1950s and lasting into the 1970s. The emergence of the newly industrialized economies of Hong Kong, Singapore, South Korea, and Taiwan, dubbed the “four Asian tigers,” in the 1970s further bolstered this perception, and the subsequent rise of the economies of Southeast Asia and the awakened “dragon” of China signify to many the long-awaited dawning of the “Asian century.”

At the same time that Asia has become a center of growth, economic prosperity is producing demographic changes that over time will weigh economies down. An indication of what awaits other Asian nations can be found in Japan’s aging and shrinking population. The country’s working-age population—defined as those aged 15 to 64—has been on a downward trend since peaking in 1995, leading to dire labor shortages in a number of industries. Unchecked population decline since 2008 has added to the troubles, casting a shadow over the long-term economic outlook of the country.

South Korea and Taiwan passed into similar territory when their populations began to decline in 2020. They may soon be joined by the other two Asian tigers, all four of whom have TFRs that are below even that of aging Japan.

ASEAN countries have also seen fertility rates drift downward as their economies have grown. At the bottom, far below the 2.1 replacement level, are Singapore and Thailand with TFRs of 1.14 and 1.52, respectively. Thailand’s economic planning agency, the National Economic and Social Development Board, estimates that at current rates of demographic change, the country’s population is on track to begin a precipitous decline once it peaks in 2028.

China with its juggernaut growth and 1.4 billion people would seem impervious to the population pressures assailing the region, but there are early signs that Asia’s biggest economy may soon feel the pinch of demographic change too. In 2016, Chinese authorities officially ended the one-child policy first introduced in 1979 in a bid to achieve more balanced population development. While the country’s birth rate edged up slightly following the decision to allow couples to have up to two children, it soon dipped again and has remained on a downward trajectory since. In 2019, China recorded around 15 million births, the lowest number since the disastrous famines sparked by Mao Zedong’s Great Leap Forward nearly six decades earlier.

The state-run academic organization Chinese Academy of Social Sciences predicts that if China’s TFR remains at the current level of 1.6, the country’s population will start to shrink before the end of the 2020s. However, experts like Yi Fuxian, a specialist in obstetrics and gynecology at the University of Wisconsin-Madison, and Su Jian, an economics professor at Peking University, have questioned this forecast, saying it is overly optimistic and based on “inflated” data. They instead point to their own research that suggests the Chinese population has been in decline since 2018.

China currently enjoys a “population bonus,” meaning that the working-age population is still large enough to offset the economic impact of the declining birthrate. However, with the working-age population cresting in 2013 and droves of “baby boomers” born after the Great Leap Forward set to retire, the country is inching toward a period of “population onus,” a development that will have serious economic repercussion as fewer workers will have to provide for the growing non-productive section of society.

This situation will be compounded by the fact that China’s newly acquired wealth has yet to trickle down through society. The Chinese economy is the second largest in the world, but its gross domestic product per capita remains relatively low, coming to around $10,200 in 2019. (By comparison, Japan’s was approximately $40,200.) At a press conference following the National People’s Congress in May, Chinese Premier Li Keqiang stated candidly that 600 million Chinese earn as little as 1,000 yuan (slightly over ¥15,000) per month. This raises the real possibility that large swaths of workers will retire poor, creating a huge population of impoverished senior citizens who will need to be supported by a shrinking workforce.

In Japan, the cresting of the working-age population in the 1990s was preceded by the bursting of the real estate-driven bubble economy. Looking at property markets around East Asia, there are indications that similar mechanisms are at work. Condominium prices in major Chinese cities like Beijing, Shanghai, and Shenzhen as well as in centers such as Seoul and Taipei have continued to rise, reaching levels comparable to what listings fetched in Japan during the bubble years.

In South Korea, Seoul real estate prices have increased by as much as 50% in the three years since Moon Jae-in was elected president. Recognizing the danger, Moon’s administration has taken steps to control soaring property values, although without success. A condominium in the South Korean capital now goes for an average of 1 billion won (¥90 million), while those in the upscale Gangnam district are priced above 2 billion won (¥180 million). The failure to reign in ballooning prices has had political repercussions for Moon, whose approval ratings have tumbled.

The inflated property values have produced a seemingly untenable debt situation. First-quarter data for 2020 from the Institute of International Finance shows South Korea’s ratio of household debt to be 97.9% of GDP, the highest among 39 advanced countries. If taken together with the nation’s insipid birthrate, there is growing skepticism about how long prices can remain at such lofty levels with a shrinking population laboring under such mammoth debt.

Cracks are also beginning to appear in China’s property market. Condominium prices in large cities like Beijing, Shanghai, and Shenzhen have soared to as much as 10 times the country’s average annual income even as data indicates that there are more than 50 million empty residences on the market. Property developers, including giant the Evergrande Group, have seen their liabilities swell to critical levels, driving worries that the sector might see a devastating rash of defaults.

If Chinese and South Korean “bubbles” burst as Japan’s did, all bets are off. The fallout of such an eventuality would likely spell disaster for East Asia’s long-term growth and put the brakes on the region’s dreams of economic hegemony.

Prime Minister of Singapore Lee Hsien Loong recently wrote an article for the magazine Foreign Affairs titled “The Endangered Asian Century” in which he warned that the region could come out on the losing side of a confrontation between China and the United States. Countries are keenly watching developments between the world’s number one and two economies in redrawing their regional strategies. However, governments must also keep their eyes on the growing threat of population change, which presents an equally ominous risk to the long-term prosperity of Asia as increasingly strained US-Chinese ties.