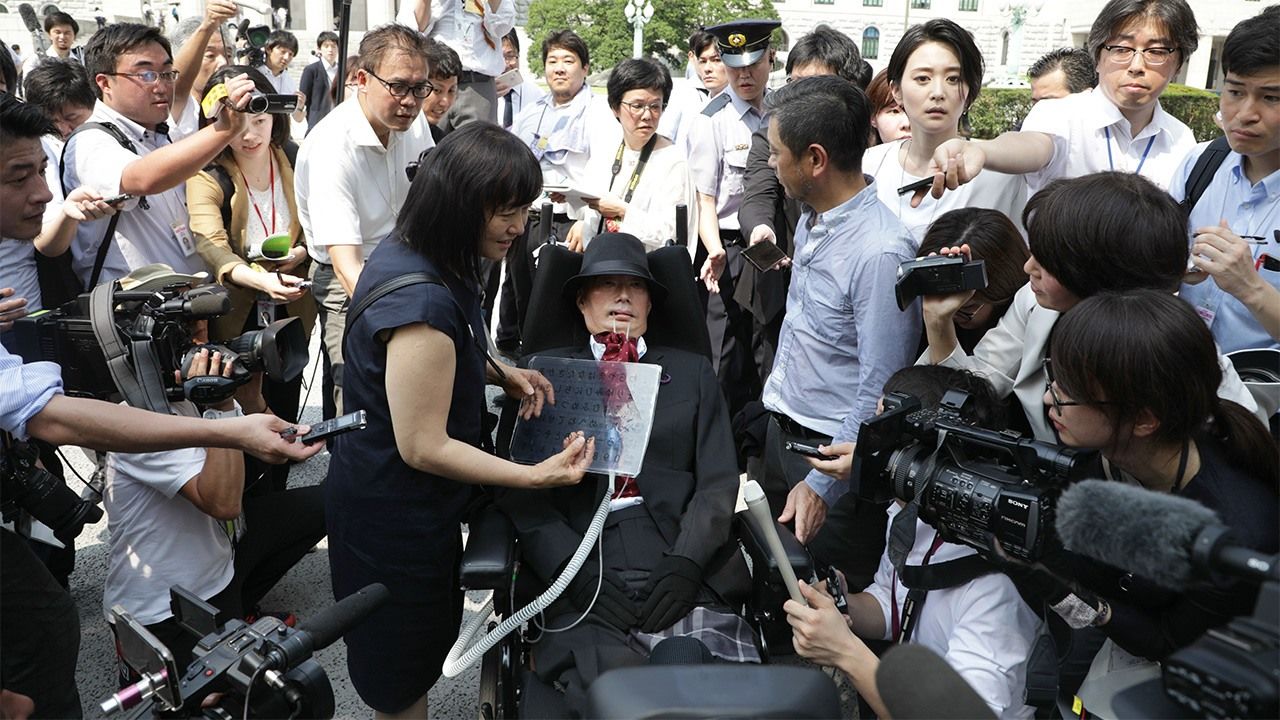 Society Health Jan 7, 2021
A recent case of two physicians helping a Kyoto woman with ALS take her life has forced Japanese society to take a hard look at the issue of euthanasia. Death studies and bioethics expert Andō Yasunori warns that legalizing the practice in Japan could push the terminally ill and others to needlessly end their lives to avoid burdening family and society.

A Death in Kyoto

In July 2020, the Japanese public reacted with shock to the arrest of two physicians on murder charges for assisting a Kyoto woman with amyotrophic lateral sclerosis, a neurodegenerative disease, to die. One of them had communicated at length on social media with the 51-year-old patient, who had repeatedly expressed her desire to end her life. The doctors carried out the act at her request in November 2019, traveling to Kyoto and administering a lethal dose of barbiturates to the woman at her home. The incident has brought out people on both sides of the euthanasia debate, raising the question of whether it is time for Japan to legalize the practice.

Proponents of assisted suicide may be inclined to praise the doctors’ actions, but the cavalier manner in which they carried out the act and past comments concerning elderly and terminally ill patients raises serious questions about their motives. Foremost was their grave disregard of basic medical protocol. The physicians were not the woman’s attending doctors and neither bothered to examine her to ascertain the progression of her ALS or assess her mental state prior to carrying out the act. If they had looked for guidance to the stringent rules governing doctor assisted suicide in countries where the practice is legal, rather than adhering to their own arbitrary standards, they might have recommended palliative care or other treatments to help alleviate her suffering rather than rushing to administer the sedative that ended her life. What makes their act all the more disturbing is the doctors’ earlier comments online questioning the value of extending the lives of aged individuals and critically ill patients who require around-the-clock care.

Very few would openly condone these physicians’ behavior. At the same time, though, there is now a growing chorus of influential figures in healthcare and other arenas asserting that the only way to prevent similar incidents is by having a hard debate about legalizing euthanasia.

Coming to Grips with Euthanasia

Euthanasia is the act of deliberately ending the life of a person to relieve pain and suffering. In Japanese it is generally referred to as anrakushi, a somewhat ambiguous term that implies a “peaceful death.” While there is no official definition of anrakushi under Japanese law, it typically describes a doctor administering a lethal dose of medication to a patient directly (active euthanasia) or providing the patient with the medication and means to administer it on their own (physician-assisted suicide). Japan does not recognize euthanasia in any form, and until relatively recently the idea of allowing the practice remained on the fringes of public and professional debate.

The focus instead has been on songenshi, or “death with dignity.” Although euthanasia is seen by some as belonging to the broader discussion of what in the West is considered dying with dignity, Japan sees the two ideas as distinct. Anrakushi implies a “hastening” of death by artificial means in what is sometimes described as doctor-assisted dying, while songenshi suggests a “natural death,” such as a family choosing to disconnect a relative in a vegetative state from a ventilator, based on an advance directive from the individual in question, or a critically ill patient opting to cease or forego life-prolonging treatments. Another distinction is that while there is no clear legal justification for either anrakushi or songenshi, there is at least precedence for the latter practice in Japanese medicine.

Since the late twentieth century, movements to legalize euthanasia in Western countries have received growing coverage in the Japanese press. For the most part, though, this has not sparked serious debate on the topic among the Japanese, who have tended to view it as an issue not impacting their own country.

This began changing in 2016, when the acclaimed scriptwriter Hashida Sugako caused a stir with an essay titled “I Want to Be Euthanized” published in a well-known literary magazine. In the piece, Hashida, who was 92 at the time, stated that if she was diagnosed with dementia or other debilitating condition she intended to travel to Switzerland, where assisted suicide is legal, to die rather than face losing control of her faculties.

Then in June 2017, national broadcaster NHK ran a documentary that followed a Japanese woman with the progressive neurological disease MSA and her family to Switzerland, where with the help of the Swiss assisted-dying organization Lifecircle, the 51-year-old woman ended her life. The program drew a strong response from the public, prompting NHK to rebroadcast it twice. The documentary is thought to have influenced the actions of the ALS patient in Kyoto.

The last few years have thus seen a number of events in Japan that have further focused attention on the topic—most recently the Kyoto incident, which has generated a wave of public support for legalizing euthanasia. However, I feel Japanese society is far from ready to have a productive debate on such a complex issue. On the Internet, people moved by the actions of the doctors have taken to online bulletin boards and social media platforms in droves to advocate for anrakushi. More often than not, though, these newly aroused proponents merely express emotionally charged views and argue for the rights of terminally ill patients to choose euthanasia if they so desire, fully ignoring the deeper social implications of legalizing the act.

There are numerous issues to contemplate before moving on to a consideration of whether euthanasia is acceptable. Foremost, we need to clearly define what anrakushi is. The term has a comforting ring in Japanese—anraku literally means “comfort” and “ease”—but it candy coats what is essentially “mercy killing” to relieve pain and suffering of a such a degree that it makes life unbearable. If the aim of anrakushi is to alleviate a person’s mental and physical anguish, it must also be discussed that there are less drastic approaches for achieving this goal, such as with pain management treatments, mental health counseling, and emotional support from caregivers. These measures allow a person to cope with the effects of the malady, whereas anrakushi eliminates the need altogether at the cost of the person’s life.

In considering euthanasia, we must see the desire to live and the desire to die as two sides of the same coin. It would be wrong to assume that just because people express the wish to die that they have given up on life completely. Humans naturally want to live with meaning, as contributing members of society, but when they lose that meaning and the value they have to add, they can fall into despair and hope for death. Paradoxically, then, it is precisely because people want to live lives of value and meaning that they may want to die.

So much of a person’s outlook on life and death hinges on the environment and the people he or she comes in contact with, though. The ALS patient in Kyoto chose to take her own life rather than continue to battle a degenerative disease with no cure. But did it have to be this way? There are numerous people struggling with the same disorder who have not given in to thoughts of death and instead find value in living, even if it means relying on a ventilator to breathe.

Take for instance Funago Yasuhiko, who in 2019 became the first ALS patient ever to be elected to the Japanese Diet. The election of a lawmaker confined to a wheelchair and who breathes with a ventilator was a landmark event that demonstrates how overly simplistic the idea is that disability reduces the quality of a person’s life. Still, there are able-bodied individuals who look at someone like Funago and declare that they would rather die than live in a similar state. I consider such views as tantamount to hate speech.

Proponents of euthanasia often cite a 2010 public survey by the Asahi Shimbun in which 70% of respondents said they approved of anrakushi. However, many of the people who answered did not understand the difference between the hastening of death through anrakushi and the “natural death” of songenshi. Still others were unaware of the existence of palliative cares for reducing pain and improving quality of life, illustrating a fundamental lack of understanding of the issue. Before discussing the pros and cons of euthanasia, we must first talk about creating a caring and supportive environment to enable those suffering from serious illnesses or with disabilities to live with dignity.

The handful of Western countries with euthanasia laws boast strong traditions of individualism, and it would be a slippery slope for Japan, with its group-oriented culture, to follow their lead in drawing up its own legislation. If euthanasia is legalized, there is a real danger of patients being pressured into choosing anrakushi out of deference to their families and society, a risk made even greater by the lack of laws laying out the rights of patients.

The topic of death is gaining attention in Japan. While this suggests a deepening philosophical interest in the question of human existence, in truth, it stems from practical concerns over the government’s ability to hold ballooning social security costs in check as the population rapidly ages. Beset by anxiety, people are less inclined to see the broader picture and more likely to defer to the views of those around them. As the discussion of euthanasia moves forward in these uncertain times, we must give proper thought to the danger that people could see anrakushi as nothing more than an easy way out.