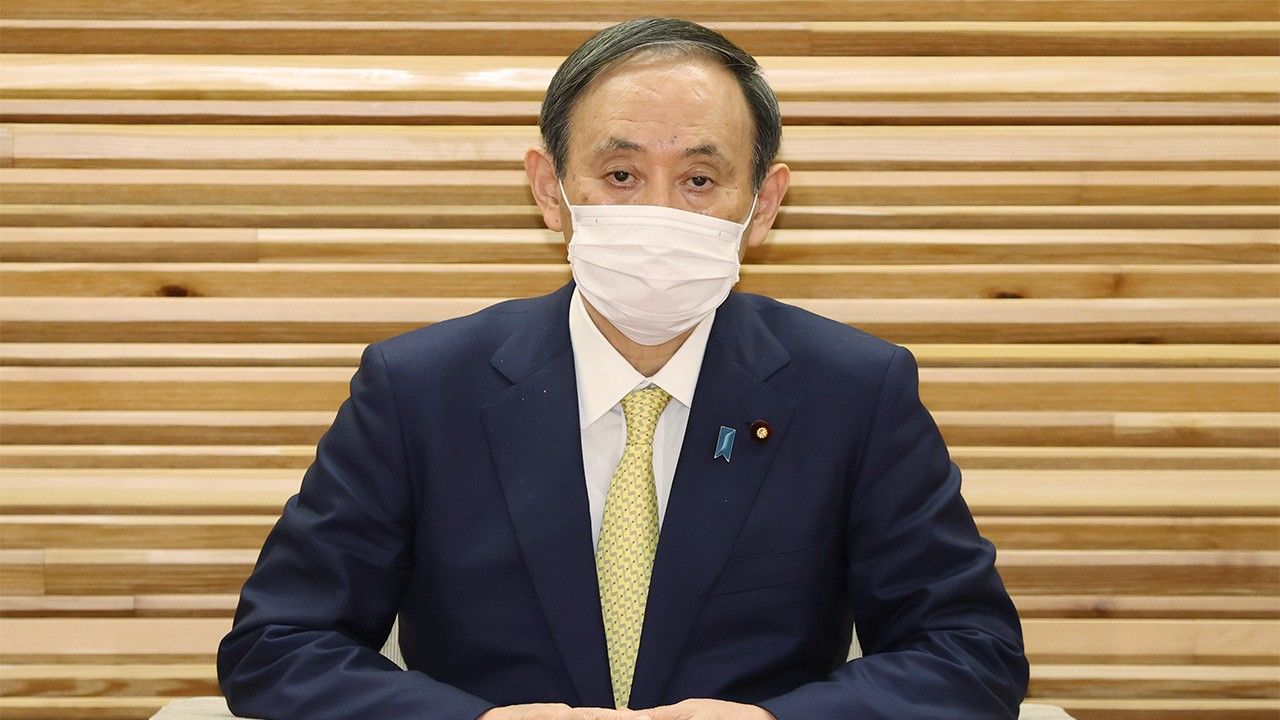 Japanese Politics in 2021: Can Suga Cement His Leadership?

Politics Health Society Sports Economy Jan 6, 2021
With the pandemic raging, the Tokyo Olympics looming, and Diet and party elections in the offing, the year 2021 will pose unprecedented political challenges for Prime Minister Suga Yoshihide, the ruling party, and the opposition.

The coming year poses daunting challenges for the fledgling cabinet of Prime Minister Suga Yoshihide. With the COVID-19 pandemic still raging, the once-delayed Tokyo Olympic Games looming, and Diet and party elections in the offing, how will Suga juggle the demands of policy, party, and electoral strategy to consolidate his leadership? And how will Japan’s opposition forces take advantage of their recent merger?

The year 2021 will be a busy and potentially pivotal one for Japanese politics. The Diet reconvenes in mid-January to deliberate two budgets before taking up the cabinet’s legislative agenda. The Tokyo Olympic Games are set to begin on July 23 after a one-year delay. Prime Minister Suga, who replaced Abe Shinzō as LDP president after Abe’s sudden resignation last September, could face a strong challenge in the regular LDP leadership election scheduled for September 2021. The current terms of all members of the House of Representatives will expire on October 21, necessitating a general election by this autumn. The Tokyo Metropolitan Assembly will also be holding an election this summer, as its members’ terms expire on July 22.

The prime minister has the power to dissolve the House of Representatives and call a general election at any time, and long-serving leaders, including Abe, have used this power to optimize their LDP’s electoral showing and strengthen their position within the party. For Suga, however, the timing will not be easy.

The Suga cabinet enjoyed high approval ratings in its first few weeks, encouraging speculation that the new prime minister might opt to consolidate his position by calling a snap election that very fall. But Suga balked at such maneuvering, insisting that the coronavirus crisis should take precedence. This consideration effectively rules out an election in January, just after the start of the next ordinary session of the Diet.

Meanwhile, the cabinet’s approval rating has fallen significantly since the honeymoon period. Voters have reacted badly to the government’s reluctance to halt or scale back the Go To Travel promotion campaign, even amid a surge in COVID-19 cases. Support for the ruling party is also being eroded by brewing scandals, including allegations that former Minister of Agriculture Yoshikawa Takamori accepted cash payments from the former executive of a major egg producer and that Abe’s political group illegally helped finance the dinners held on the eve of the annual government-sponsored cherry blossom-viewing party. With such storm clouds gathering, the LDP’s junior Diet members, whose seats are relatively insecure, are hoping for an early dissolution, fearing that a further drop in the cabinet’s approval rating will jeopardize their reelection prospects.

Suga, however, prides himself on being a politician who knuckles down and gets things done, and he has pledged to “create a cabinet that works for the people.” His first preference, insiders agree, is to demonstrate his leadership by defeating the coronavirus and delivering on his policy pledges, including a new digital policy agency, lower cell phone rates, and regulatory reform. A successful Tokyo Olympics, of course, could seal the deal, giving the cabinet and the LDP a strong boost going into a fall general election.

However, much can happen between now and then, especially in the midst of a pandemic. The prime minister will continue to assess his options as the situation unfolds.

The first order of business for the government when the Diet reconvenes on January 18 will be enacting not one but two budgets: The Diet must approve a third supplementary budget for fiscal 2020, as well as the annual budget for fiscal 2021 (extending through March 2022). This is likely to take lawmakers through the end of March, which thus becomes the first practical opportunity for Suga to dissolve the Diet and call a snap election.

A spring election is not entirely out of the question. The government plans to start vaccinating the population against the coronavirus early in 2021. If that campaign should prove unexpectedly efficacious in dispelling public anxiety about the virus and spurring economic growth, then Suga might want to seize the moment and call a snap election while his approval ratings are high.

At this time, however, all indications suggest that Suga will turn directly from the budget to his legislative agenda, hoping to push through bills for a new digital policy agency and regulatory reform before the current Diet session ends around mid-June. If the pandemic seems under control, and the economy is recovering, Suga might opt to dissolve the lower house and call a snap election at that auspicious juncture.

A summer election could pose problems, however. Scheduling the general election too close to the opening of the Tokyo Olympics on July 23 raises a number of issues, including the risk of creating a political vacuum at a critical time. In addition, such timing increases the likelihood of a same-day election for the Tokyo Metropolitan Assembly (whose members’ terms expire on July 22). This is a prospect that alarms the Kōmeitō, the LDP’s longtime junior coalition partner, which places as much importance on the Tokyo Metropolitan Assembly as on the House of Representatives. Still, in view of Suga’s reputed links to leaders of the Sōka Gakkai—the powerful lay Buddhist organization that forms the Kōmeitō’s base—an arrangement could probably be reached. The date most frequently bandied about for a double election is July 4, which would mean dissolving the Diet in early or mid-June.

As things stand now, insiders agree, the most likely scenario is that Suga will wait until after the Paralympics come to a close on September 5 to dissolve the House of Representatives and call a general election. The next question is how best to coordinate the general election and the LDP leadership contest slated for the end of September. If Suga leads the LDP to a resounding victory in the House of Representatives before the LDP election, the party might well reelect him by consensus, dispensing with a formal vote. On the other hand, a lively contest among some of the party’s rising stars prior to the general election could boost public support for the LDP and favorably affect the outcome.

Of course, all of this presupposes that the pandemic will be brought under control, and the Olympics will proceed on schedule. Should the infection continue to spread, necessitating cancellation of the games and plunging the economy into a deeper recession, public support for the cabinet is bound to weaken. If Suga’s approval rating falls far enough, his position as head of the LDP is bound to be challenged. Who is standing in the wings to take over leadership of the ruling party?

So far, there is no clear favorite to succeed Suga as LDP president and prime minister. Suga’s opponents in the last party election, former Minister for Foreign Affairs Kishida Fumio and former LDP Secretary General Ishiba Shigeru, were once seen as top contenders for the post, but since their defeat in September, they seem to be on the outside looking in. Instead, expectations are rising for Minister for Regulatory Reform Kōno Tarō and Minister of the Environment Koizumi Shinjirō—popular, charismatic figures who could help burnish the LDP’s image going into a general election. Foreign Minister Motegi Toshimitsu is said to be a favorite of both Minister of Finance Asō Tarō and former Prime Minister Abe. However, none of these candidates has a clear edge over the others.

Suga himself lacks the bedrock support conferred by factional affiliation; he won the last LDP election with the combined support of factions other than Kishida’s and Ishiba’s. The prime minister appears to have great confidence in LDP Secretary-General Nikai Toshihiro, to whom he has entrusted management of party and Diet affairs alike. But Nikai has drawn the ire of other party leaders by securing a disproportionate number of party and government appointments for his own middling faction. The dynamics of the next LDP election could hinge in large part on whether Suga continues to favor Nikai or begins to share the wealth among the party’s larger factions, including those led by Asō and Hosoda Hiroyuki. The prime minister needs to weigh these internal considerations even while grappling with the pandemic and the economy.

The coming year will also test the leadership of the number one opposition force, the Constitutional Democratic Party. Last September, the CDP increased its lower house strength from 90 to 150 seats by merging with the Democratic Party for the People. The left-leaning CDP has established itself as the perennial gadfly, relentlessly pursuing cases of real or alleged corruption and abuse of power within the government and ruling party—from the Moritomo Gakuen and cherry-blossom-party scandals under Abe to the controversy over Suga’s rejection of nominees for the Science Council of Japan. While the CDP has doubtless functioned to check excesses and abuses by the party in power, it has failed to present voters with realistic policy alternatives, which is doubtless one reason for its chronically low approval rating. At the present time, it is also grappling with internal discord over key policy issues, including the phaseout of nuclear energy.

Edano has clearly signaled his intent to stay on the attack in 2021, pummeling the Suga cabinet over its handling of the coronavirus crisis and allegations of corruption and influence peddling among LDP politicians and government officials. But the payoff from this negative approach is bound to be limited unless the CDP can present itself as a party capable of governing.

Edano’s strategy for the upcoming lower house election will be to coordinate closely with the other opposition forces, including the Japanese Communist Party, in contesting the 289 single-seat constituencies, so as to avoid splitting the vote. The goal will be to field one opposition candidate, and no more, in as many of those districts as possible. But the efficacy of such an inclusive partnership is open to question. In 2020, cooperation between the CDP and the JCP yielded a string of losses at the local level (as in the mayoral elections in Utsunomiya and Arakawa, Tokyo). The JCP has managed to retain a small but faithful following over the years. The problem, as summed up by an LDP observer, is that “the more actively the JCP campaigns, the more conservative voters they chase away.” This is familiar territory for the opposition, which has repeatedly entered into dubious and unsustainable alliances at the expense of internal cohesion and credibility.