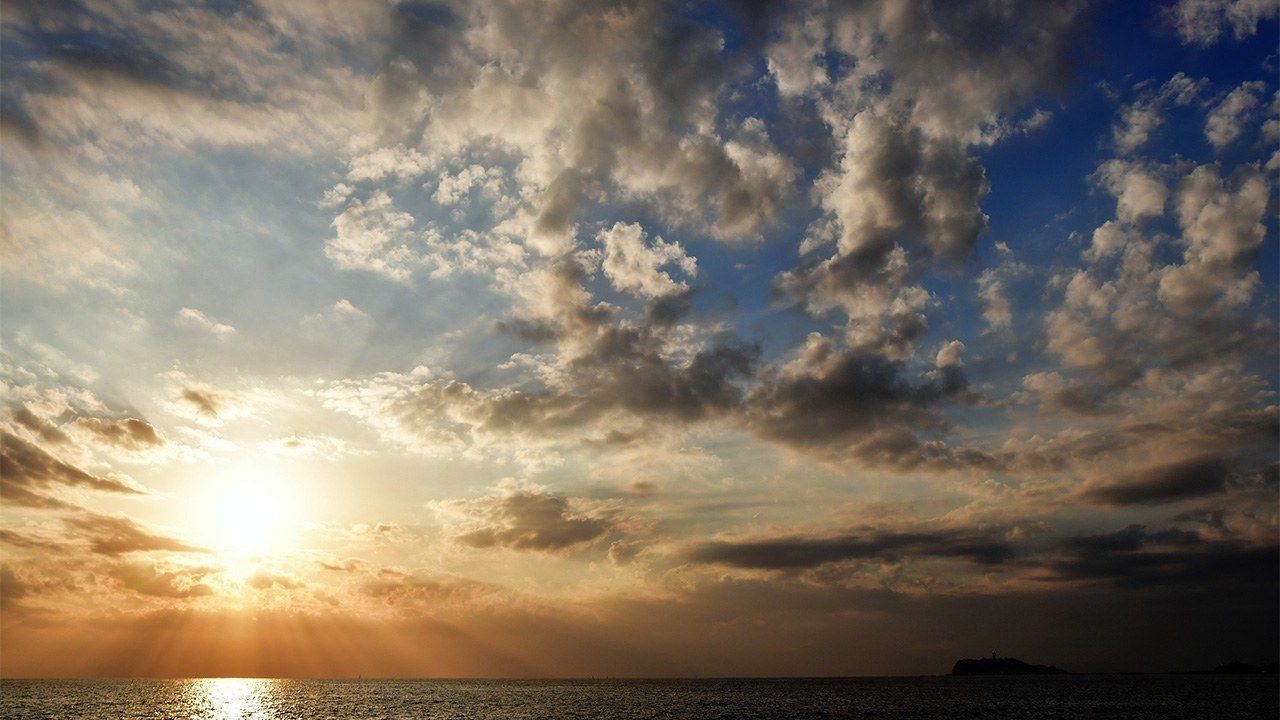 The Japanese Economy in 2021: Pandemic Easing and Gradual Recovery

Economy Jan 8, 2021
A pandemic convulsed the entire world in 2020. As a third wave of infections continues to mount in Japan, the spread of COVID-19 remains a risk for the domestic economy. The author, a leading economist, predicts that Japan’s economy will continue a gradual recovery in 2021, while acknowledging the existence of uncertainties.

A Year Convulsed by COVID-19

The year 2020 was one convulsed by a pandemic. The term “novel coronavirus” made its first appearance in the January 2020 Economy Watchers Survey of the Cabinet Office. Since then, the growth of COVID-19 cases has been a significant adverse factor for the economy.

The influence of COVID-19 was also strongly felt in year-end events. In Japan’s word-of-the-year contest, half of the 30 words nominated were related to COVID-19. The top prize went to san mitsu, a phrase commonly rendered in English as the three Cs, or closed spaces, crowded places, and close-contact settings that are to be avoided. The kanji of the year selected by a nationwide vote was the mitsu ideograph in san mitsu.

The kanji of the year tends to reflect the business cycle or economic conditions experienced that year. In 2012 and 2016, when the summer Olympic and Paralympic Games were held, the kanji selected was kin (gold). At the start of 2020, it was widely thought that kin would be chosen again as long as there was no repetition of the 2008 financial crisis. A worsening COVID-19 pandemic, however, caused the Tokyo Olympic and Paralympic Games to be postponed to 2021, and the possibility of kin as kanji of the year vanished.

The Economy Watchers Survey, which compiles the views of economic observers, recorded all-time lows for all diffusion indices in April 2020 when the government declared a state of emergency.

In April, the survey’s DI for current economic conditions was a dismal 7.9. The index then recovered in subsequent months, helped by the government’s Go To campaign to support the travel and hospitality industries. In October, the current DI momentarily rose to 54.5, surpassing the 50 that divides favorable from unfavorable sentiment. I have developed a COVID-19 current DI by selecting only respondent replies with comments on the pandemic. This DI runs below the general DI, indicating that COVID-19 is acting as a brake on the economy. In some responses, a majority of the 2,050 economy watchers surveyed cited COVID-19 as a factor informing their view of the economy. 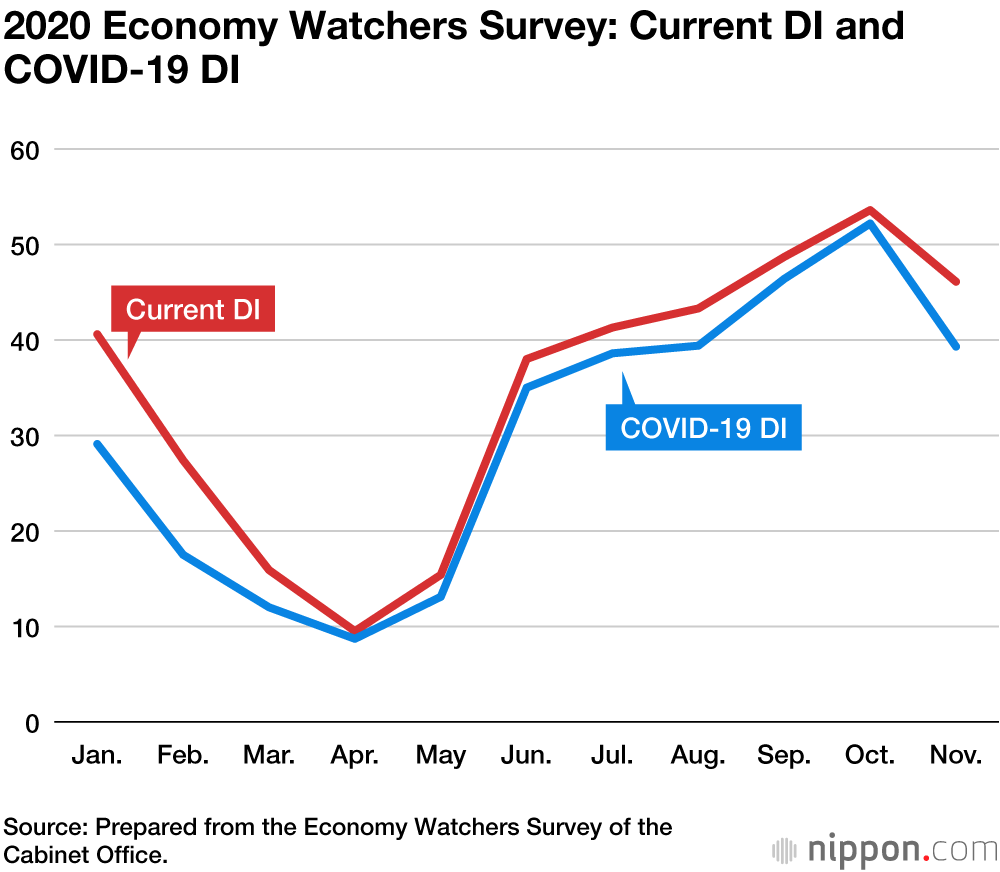 Reflecting a third wave of COVID-19 cases, the current DI declined 8.9 points against the previous month in the November survey. The COVID-19 DI fell by a greater 12.9 points in November, highlighting that concerns have multiplied about the direction of the pandemic.

Influenced by COVID-19, real GDP contracted an annualized 29.2% against the previous quarter in April–June 2020, when a state of emergency was declared. GDP then rebounded sharply, rising 22.9% on an annual basis in July–September 2020. In the Japan Center for Economic Research’s December 2020 ESP Forecast, which averages the predictions of private-sector economists, GDP is predicted to grow an annualized 3.4% against the prior quarter in October–December 2020 and to trend at an annualized rate of 1% to 2% between January–March 2021 and January­–March 2022.

Following the increase of COVID-19 cases, restrained economic activity was seen in the second half of November and in December. Moreover, the Go To campaign was suspended nationwide from December 28 to January 11, a measure to reduce the burden on the health-care system over the turn of the year. As a result, it is now possible that real GDP will fall short of the average forecast of the ESP Forecast for January–March 2021. The average of the eight lowest forecasts was an annualized decrease of 0.6% against the prior quarter. Hence, it would not be surprising if GDP momentarily records negative growth.

In the November special edition of the ESP Forecast, nearly all economists indicated the situation for COVID-19 cases as the greatest risk for Japan’s economy, far surpassing the worsening of the US economy in second place.

The ESP Forecast includes a composite diffusion index on business conditions expressing the consensus view of economic forecasters. This index is 90.0 for October-December 2020, far above the dividing line of 50 between an expanding and contracting economy. The composite DI then trends in the 70s and 80s to July–September 2022, again far above 50, while declining momentarily to 72.9 in January–March 2021 and in October–December 2021, immediately after the Olympic and Paralympic Games. The consensus view of economists is that a gradual expansion will continue with some variability, with May 2020 likely being the cyclical trough. 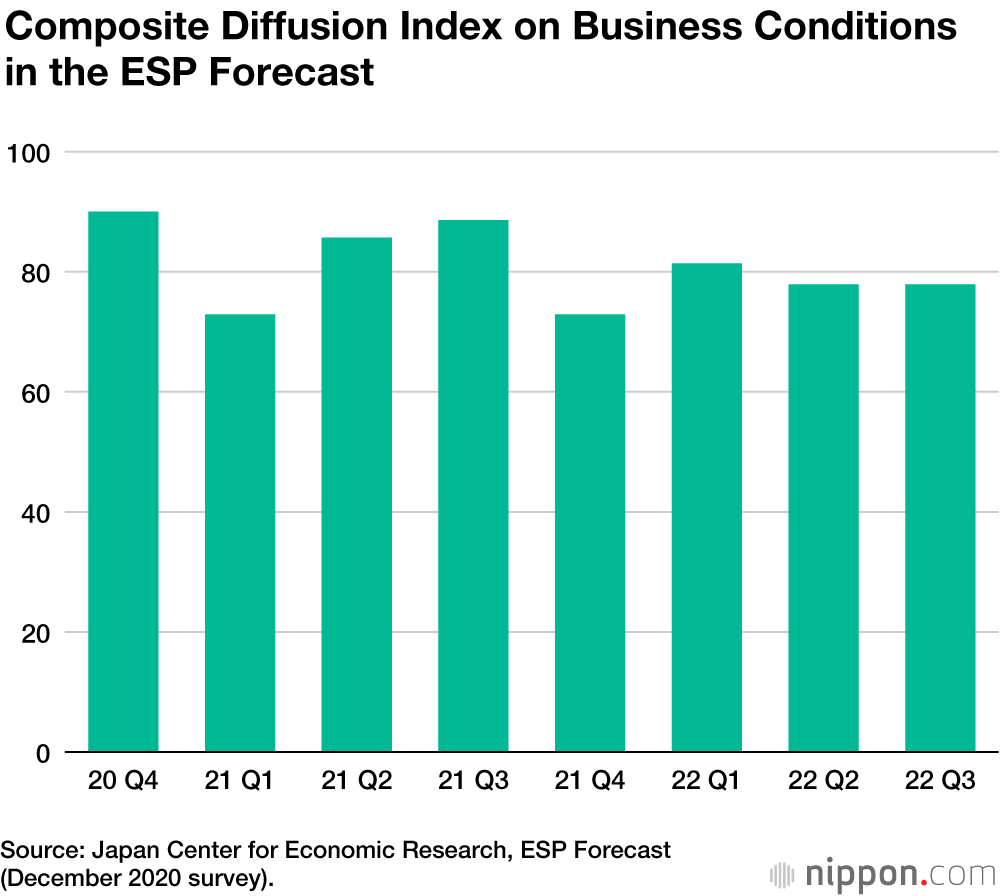 A Scattering of Cheerful Data

While real GDP is foreseen to continue growing to January–March 2022 in the average forecast, it is unlikely to return to its level before the pandemic until 2023.

A forecast of a gradual recovery is supported by the improvement of economic activity, such as the rebound of exports and the sustained growth of production. These developments are reflected in the Bank of Japan’s December Tankan (Short-Term Economic Survey of Enterprises), where large manufacturers’ assessment of business conditions (percentage of enterprises responding “favorable” minus the percentage responding “unfavorable”) was –10, an improvement of 17 points over the –27 reported in September.

More than a few economic numbers are suggesting that business sentiment is firm. While the current DI in the November Economy Watchers Survey, which represents current sentiment for the direction of the economy, worsened against the previous month, the current DI for corporate activity has turned upward.

In the December Tankan, all enterprises and industries foresee capital spending plans decreasing 3.9% against the prior year in fiscal 2020, a downward revision from the 2.7% decrease reported in the September Tankan.

The production capacity DI (excessive minus insufficient), however, does not point to growing sentiment that capacity is excessive. It should be evident that the downward revision of capital spending plans is not arising from concerns about excess capacity but from the increase of COVID-19 cases.

The fact that companies are not showing growing concern about rising employment, production capacity, and inventories is good news with respect to the business cycle.

With the government pushing for lower mobile phone fees, Japan is not facing a situation where prices are likely to rise, and the Bank of Japan will be able to maintain its loose monetary policy. Reports are appearing that the BOJ intends to extend its support for companies’ financial positions.

Major fiscal interventions are being made. On December 8, 2020, the government decided on additional stimulus measures of ¥73.6 trillion. These measures consist of (1) ¥6 trillion for COVID-19 containment measures, (2) ¥51.7 trillion to support structural changes toward a post-COVID economy, and (3) ¥5.9 trillion for disaster management and reduction measures and enhanced resilience for the nation’s infrastructure.

On December 15, the government adopted a third supplementary budget for 2020 with additional expenditures of ¥21.8 trillion in the general account. This budget includes spending for stimulus measures and for local allocation tax subsidies.

COVID-19 vaccinations have begun in Britain and the United States, promising a light at the end of the pandemic tunnel. The situation in Japan remains serious, though, with new daily cases reported in Tokyo breaking the 1,000 mark for the first time on New Year’s Eve, and national totals marking new records almost every day. The declaration of a fresh state of emergency in Tokyo and three surrounding prefectures threatens to temporarily drag the economy down again, but we have no choice but to call on our wisdom to come up with support measures that will get us through the crisis. It is darkest just before the dawn, goes the saying, and we will be called on to buckle down until we can achieve widespread vaccination against the coronavirus. With the start of vaccinations and the development of COVID-19 therapeutics in 2021, though, it is reasonable to think that the pandemic will begin to wind down and come to an end eventually.

Perhaps the kanji of the year selected in December 2021 will not be one related to COVID-19 but will be a cheerful one like kin (gold), kagayaku (glow), or yō (positive) based on the successful holding of the Tokyo Olympic and Paralympic Games.

This is my hope.