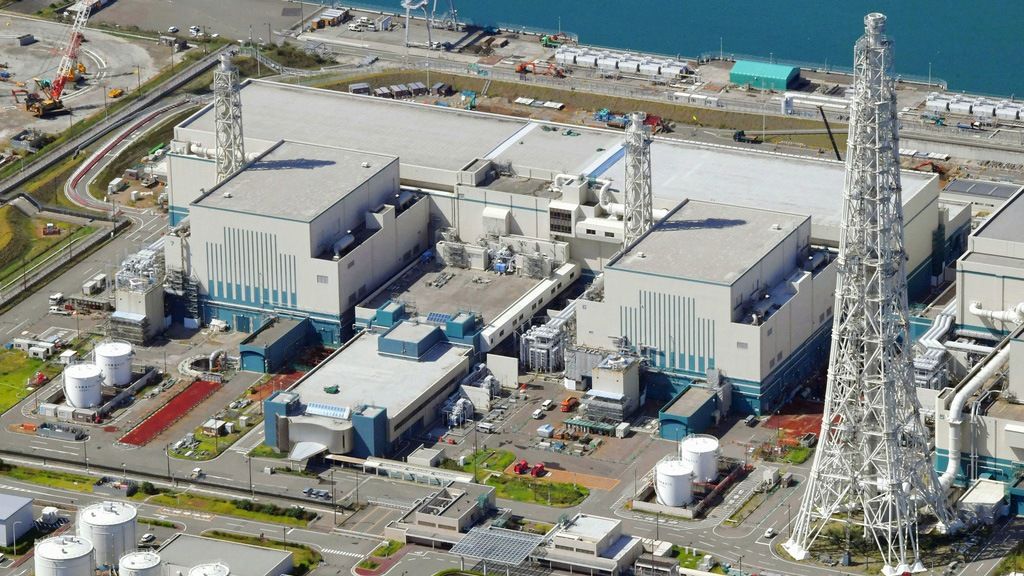 Nuclear Power in Japan: Safety at Kashiwazaki-Kariwa Remains an Issue

Society Environment Science May 14, 2021
The Fukushima Daiichi accident forced Japan to bolster regulations for its fleet of nuclear reactors. After undergoing significant upgrades, the Kashiwazaki-Kariwa plant in Niigata Prefecture is on track to restart, although recent security issues have come to light that raise new concerns about the safety of nuclear power.

Nuclear power is gradually making its way back, after seeing its place in Japan’s energy mix dramatically reduced in the wake of the Fukushima Daiichi Nuclear Power Station meltdowns of March 2011. Over the last several years, utilities looking to restart idled reactors have heavily invested in upgrading facilities to meet rigorous new regulations. So far, though, only a handful of plants have come back online.

Security issues recently uncovered at the Kashiwazaki-Kariwa Nuclear Power Station operated by Tokyo Electric Power Company illustrate the difficulty of passing the Nuclear Regulatory Authority’s stringent safety measures. TEPCO had poured resources into the facility in Niigata Prefecture with the goal of restarting the Unit 6 and 7 reactors at the site, but the NRA has ordered that further improvements be made before authorizing the utility to begin the refueling process. Below I assess the major upgrades made at the Kashiwazaki-Kariwa plant under the new NRA regulations released in July 2013.

The Fukushima Daiichi accident altered the view of safety at Japan’s nuclear power plants. Normally, an incident would trigger an emergency response whereby the reactors would shut down, water would circulate to keep the fuel rods cool, and any residual contamination would be contained. However, the massive tsunami short-circuited this process at the Fukushima facility when seawater inundated the lower levels of the reactor building, where the emergency diesel generators were located. Without power, the cooling systems went offline and the reactors melted down, eventually spewing radiation into the atmosphere.

In the wake of the incident, protecting reactors from tsunami has become a priority. The NRA assessment of the Kashiwazaki-Kariwa plant estimates a tidal wave as high as 6.8 meters could reach the coastline where the facility sits. Learning from Fukushima, TEPCO chose to exceed the regulatory body’s requirement and built a seawall towering 15 meters above the surf. Using existing topography to its advantage, it constructed a 10-meter steel-reinforced concrete barrier for the low-lying Units 1–4 and a 3-meter earth embankment at Units 5–7, which are perched higher above the sea.

Viewed from the beach, the structure has a mountain-like appearance. However, a TEPCO official told me that the company was compelled to create additional lines of defense in the chance that a tsunami breached the main seawall. The utility erected secondary barricades and installed waterproof barriers to keep seawater from entering reactor buildings through vents and windows. As further precaution, it fitted areas housing generators and other emergency equipment with heavy, watertight doors and reinforced drainage systems, including joints and penetration points in walls, to prevent water from leaking in.

In an emergency, keeping cooling systems functioning is of utmost importance. To prepare for an event where the seawall and smaller barriers fail or that the power goes out at the Niigata plant, TEPCO installed four sets of mobile gas-fired generators and switchboards on high ground and stationed a fleet of 20 generator cars as backup.

If these safety measures fail and water needs to be directly applied to reactors—as in the dramatic scenes of a Self-Defense Force helicopter dumping seawater on the mangled reactor buildings at Fukushima Daiichi—TEPCO constructed a 20,000-cubic-meter capacity freshwater holding tank and has 42 truck-mounted fire pumps stationed on site. As further precaution, it installed steam-driven pumps capable of running off of water vapor generated by the reactors. 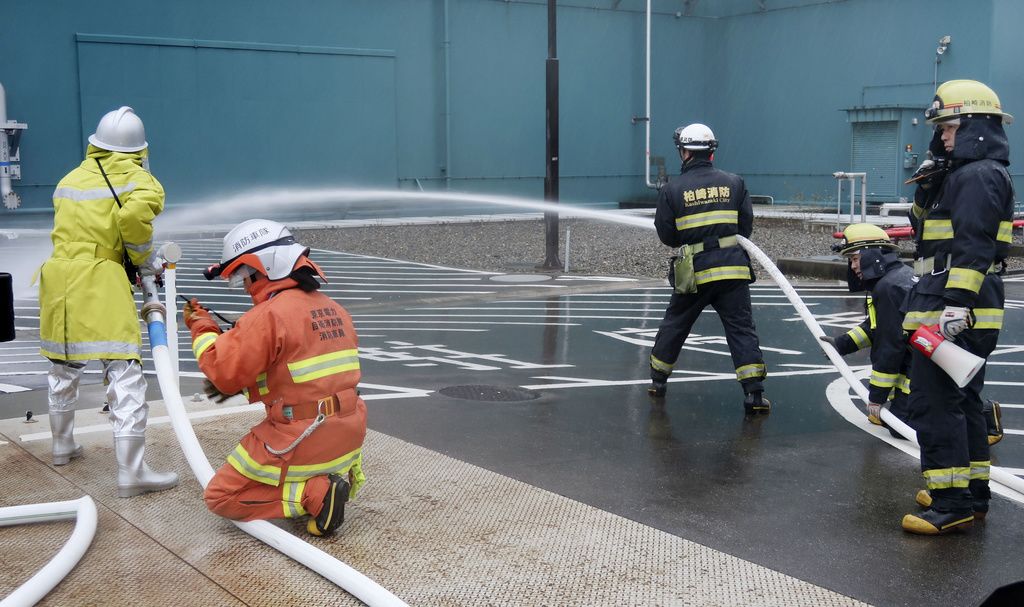 Fukushima Daiichi offered a stark lesson in what could happen again without such systems in place. With the plant’s cooling systems disabled, the overheated fuel rods reacted with the surrounding steam, splitting the water molecules and leading to the hydrogen explosions that devastated the reactor buildings. To prevent a similar scenario from unfolding at the Kashiwazaki-Kariwa plant if reactor cores were to be damaged or the cooling system knocked offline, TEPCO equipped reactor buildings with mechanisms that release oxygen to prevent hydrogen from building up to dangerous levels. In addition, it installed vent filters designed to lower the concentration of radioactive particles and prevent their release into the external atmosphere.

TEPCO faced major challenges in bringing the plant in line with the NRA’s new regulations, considered the strictest in the global nuclear industry. Along with tsunami measures, the utility had to meet stringent antiterrorism guidelines, including developing a response to attackers flying an airplane into the facility. The government completed an inspection of Unit 7 in October 2020 and the bulk of construction was completed in January of this year. TEPCO was confident it had covered all bases, but the discovery that individuals had used an employee ID card to enter the central control room without authorization and that an intruder detection system had not been functioning for an extended period have led the NRA to halt plans for restarting the reactor. The security problems also throw into question whether residents will agree to bringing the plant back online.

Along with meeting NRA regulations, utilities aiming to restart reactors must win the approval of residents of the towns and cities where plants are located. Debate is often fraught as host communities weigh the economic benefits of nuclear power, including jobs and revenue from government subsidies and local taxes, against safety concerns. Money pouring into construction industries from huge projects to upgrade facilities has only complicated the issue.

An illustration of the dilemma facing host communities is the decision of the mayors of Onagawa and Ishinomaki in Miyagi Prefecture to approve the restart of Unit 2 of Tōhoku Electric Power Company’s Onagawa Nuclear Power Station. Miyagi Governor Murai Yoshihiro also gave his endorsement and announced the decision in November 2020 after meeting with the two mayors, marking the first time a facility affected by the March 2011 earthquake and tsunami received the go-ahead to resume operation. Speaking at a press conference, the governor cited local employment opportunities and tax revenue as key factors in swaying the consensus of local leaders in favor of restarting the reactor, but stressed that the decision was a bitter one to make.

A similar dynamic is at play in the municipalities of Kashiwazaki and Kariwa, which jointly host the TEPCO power plant. As of January 1 of this year, the facility employs some 6,300 people, including utility personnel and staff of independent contractors, of whom around 3,500 are local residents. Factoring in family members potentially quadruples the number of people who rely on the power plant for their livelihoods, making the decision to restart a difficult one to oppose.

The two host municipalities are similarly dependent on revenue flowing into their coffers from the plant. This includes subsidies and grants from the national government, prefectural duties on nuclear fuel, a tax levied on spent fuel, and local property and income taxes. In 2018, Kashiwazaki received ¥3.4 billion in subsidies and other government funding and Kariwa ¥1.3 billion. If local taxes are factored in, Kashiwazaki’s revenue directly related to the nuclear power plant came to ¥8.0 billion and Kariwa’s ¥2.9 billion, around 15% and just over half of their annual income, respectively. This alone shows just how reliant the communities are on nuclear energy.

Like other host communities, the remote, cash-strapped municipalities saw nuclear energy as a lucrative endeavor. Kashiwazaki and Kariwa approved the plant in 1969, construction of the Unit 1 reactor began in 1978, and the facility went online in September 1985. TEPCO subsequently built six more reactors at the site, each bringing additional revenue to the municipalities. The last of these, Unit 7, was fired up in July 1997.

However, safety concerns have dogged the facility. In July 2007, the Chūetsu Offshore Earthquake sparked a fire and caused radiation leaks, forcing all the reactors offline for a time. After upgrades were made, several units were restarted, only to be halted indefinitely following the Great East Japan Earthquake and meltdowns at Fukushima Daiichi in March 2011.

The prolonged shutdown has seriously impacted the economic wellbeing of the communities. A visit to the shopping arcade next to Kashiwazaki Station and the town’s entertainment district reveals a startling number of shuttered businesses, a situation that has only been exacerbated by the pandemic. Kashiwazaki’s population, which was already rapidly graying, has shrunk from 90,000 in 2010 to 81,000 as of 2020. The demographic trend in the village of Kariwa can be assumed to be similarly bleak. As in Onagawa, objections residents may have to restarting the reactors will almost certainly take a back seat to the more pressing considerations of jobs and reviving the local economy.

Weighing the Cost of Safety

The results of elections in November 2020 indicate strong public approval for bringing the reactor back online. Residents of Kashiwazaki reelected Mayor Sakurai Masahiro, who supports the restart, to a second term in a landslide over an antinuclear challenger, while Kariwa voters handed pronuclear Mayor Shinada Hiroo a sixth term. The majority of local assembly members in both towns are likewise in favor of resuming operations at the plant.

In contrast, the prefectural government has taken a measured approach toward resuming operation of the Kashiwazaki-Kariwa plant, including establishing its own supervisory committee to verify the causes of the accident at Fukushima Daiichi and delaying debate on restarting Unit 7 until the body issues its final report. Barring one or more committee members expressing opposition, however, Niigata Governor Hanazumi Hideyo is expected to certify the restart before the gubernatorial election slated for June 2022 to prevent the issue from influencing the race. It remains to be seen to what degree the recently discovered safety flaws will affect this timeline.

The central government remains eager to get Kashiwazaki-Kariwa back up and running. As Japan slowly transitions from carbon-based fuels toward renewables to reduce CO2 emissions, it plans for nuclear power to provide 30% of the country’s energy needs.

In the end, the deciding factor will be safety. TEPCO so far has invested ¥1.2 trillion in upgrading the Kashiwazaki-Kariwa plant and has spent considerable time and energy touting its efforts. In clearing the NRA’s stringent regulations, the utility had seemingly demonstrated beyond a shadow of doubt that it was safe to bring the reactors back online. While there is no denying that the extensive safety measures the utility has put into place have boosted the facility’s resilience against known risks like natural disasters, there is not telling what new and unforeseen threats might be lurking around the corner. Such uncertainty makes it hard for many members of the public, me included, to trust completely in the safety of nuclear power.

It may turn out that the recent security failings, while egregious, on their own would not have allowed an intruder to infiltrate the plant undetected. However, they do illustrate the ongoing risks of neglect, bad judgement, procedural failures, and other human errors, factors that even the most stringent physical upgrades cannot guard against.

The government, despite considerable public uncertainty, is committed to pushing ahead with its plans to bring the country’s fleet of reactors back online. Faced with this reality, it is vital that citizens understand the state of nuclear energy in Japan and decide for themselves if it is something they can live with or choose to do without.