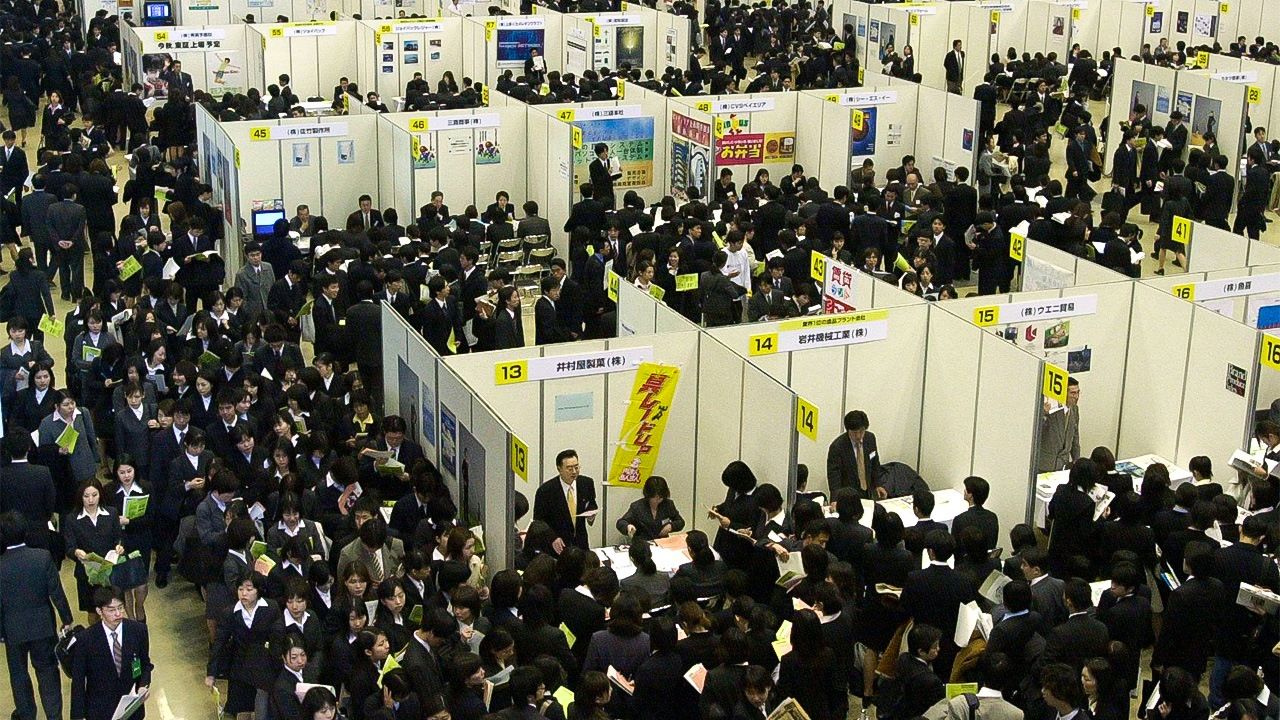 Economy Society Work Health May 13, 2021
The “underclass” encompasses Japan’s nonregular employees. “Nonregular” means that their employment is not secure, and their earnings noticeably lower. There are now 9 million such people in Japan, accounting for 14% of the total workforce. The author sounds a warning bell, saying that if we cannot find a way to help them, there is no future for the country.

From the “Hundred Million Middle Class” to a Stratified Society

In the 1970s and 1980s, Japan was known as the “hundred million middle class” society. According to statistics from the Organization for Economic Cooperation and Development, Japan’s economic divide was minimal then, in line with northern European countries. In public opinion surveys conducted by the government, about 90% of people saw their standard of living as falling in the middle of the pack. A decade and a half of high economic growth starting in the late 1950s had lifted the standard of living substantially, and the majority of Japanese people believed themselves to be part of a middle class a hundred million strong.

Subsequently, though, economic disparities in Japan grew rapidly. Using the Gini coefficient, where a score closer to 1 indicates the greatest inequality, after reaching bottom in 1980 with 0.349, Japan saw gradual increases, to 0.498 in 2001 and 0.559 in 2016. The rate of poverty in Japan is today the second highest among G7 countries. Many have come to acknowledge that Japan no longer has a hundred million in its middle class, but has rather become a stratified society.

As the disparities have grown, Japan has morphed into a new type of class-based society. A capitalist society is divided into classes from the start—four, according to modern sociologists, including the capitalist class (the managers and shareholders of the production end) and the worker class hired by them.

Two more classes are sandwiched in between those two. One is a “new middle class”—people who run the organizations, supervise production, and develop technologies under the direction of the capitalists. The other one, which might be called the “old middle class,” includes farmers who run their own operations and the self-employed. Just like the capitalists, they run their own businesses, but they also work on-site, just like the worker class, and so combine the characteristics of the two.

There is obviously an economic order to these four classes, with the capitalists at the top, the workers at the bottom, and the two middle classes in between. The capitalist class cannot pay these laborers too low a wage, placing them in a precarious situation where survival is no longer guaranteed; they must be fit to come back and work the next day, creating families and raising children to ensure that the next generation of workers will be available. This is why the worker class nowadays is given a minimum level of rights.

The Rise of the Nonregular Employee

Since Japan’s bubble economy in the late 1980s, divisions have started to appear within the worker class. When times are good, corporations must expand their workforce, but if they hire full-time employees, they cannot fire them when the economy turns. That is what sparked the hiring of young graduates as nonregular employees. Back then, such young people were known as “freeters” (furītā). Even before then, many married women were hired as nonregular employees, but now we are seeing increases in both young men and women.

Then came the economic crisis caused by the bursting of the bubble in the early 1990s. Corporations reduced the number of new recruits, and started to hire new graduates as nonregular, rather than full-time, employees. This trend picked up pace considerably in the late 1990s and many young graduates were unable to find full-time employment, marking the start of the “employment ice age.” In particular, it was those who graduated from high school between 1999 and 2004, and who are now around age 40, who had the hardest time, making them the center of the “employment ice age” problem.

It is not at all unusual for new graduates in North America and many European countries not to be able to find a job immediately, but this was the first time it happened in Japan since its recovery from World War II. This employment ice age produced many who never did get full-time jobs and remained low-paid, nonregular employees.

That state of affairs lasted 30 years, during which Japan became home to an entire generational group of people mired in nonregular employment.

A Quarter of the Worker Class

These people can only make enough money in wages to scrape by. That makes getting married difficult, and raising children becomes a herculean task. Women with partners, basically part-time housewives, can get by as nonregular employees because they have their husband’s income. But those who became nonregular employees after the bubble years don’t have that cushion. Japan now has a giant new underclass made up of nonregular employees other than part-time housewives. In many Western countries the word underclass often refers to minorities suffering from discrimination, but in this case, it is quite simply a poor class, with low wages and low job security.

How many of them are there? The graph below shows the trend in the number of nonregular employees from 1992 to 2017 (not including management and professionals). In 1992, there were 9.92 million nonregular employees, but the number rose sharply and had reached 17.39 million by 2017. Additionally, in 1992, part-time housewives made up 60% of nonregular employees, but that percentage fell below 50% in 2002, with the underclass becoming the mainstream. The underclass totaled 9.29 million in 2012, and although there was a slight dip to 9.13 million in 2017, it still accounted for 14.4% of all workers, and has become a tangible force comprising almost a quarter of the worker class as a whole. 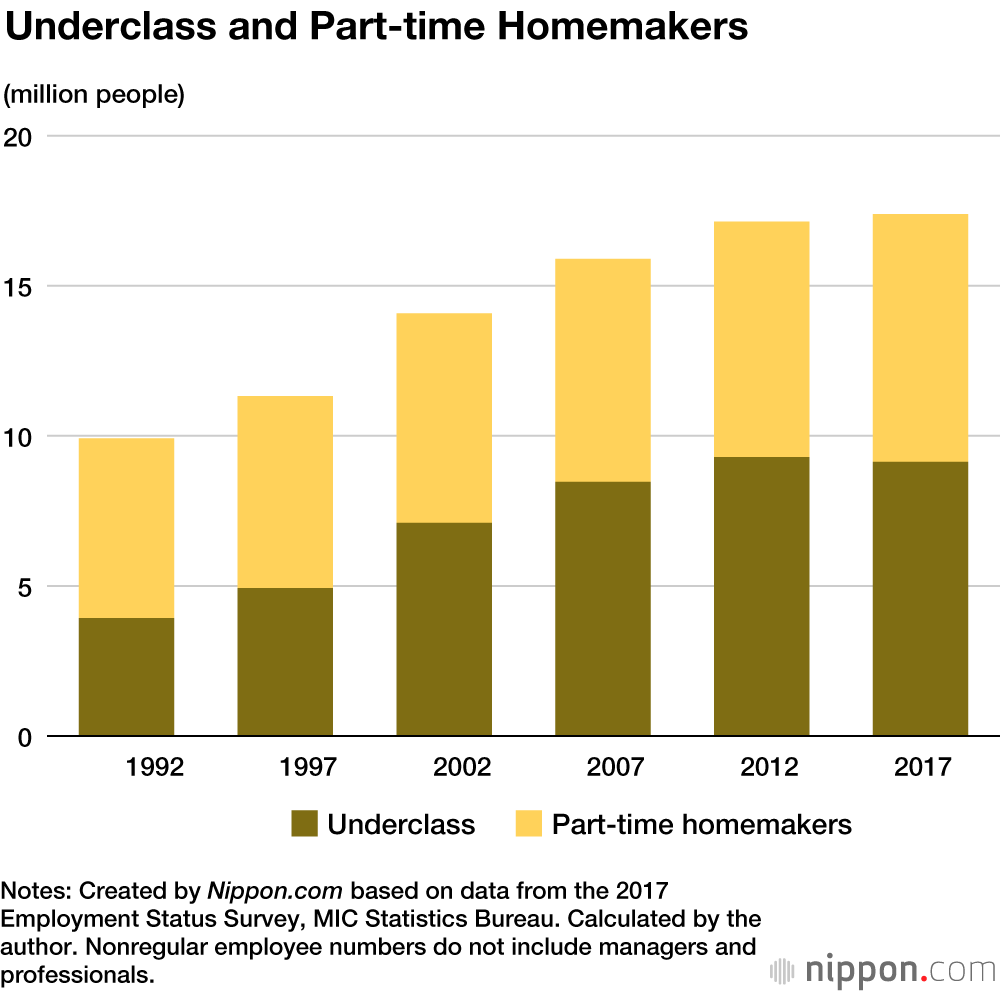 In addition, there are also some 3 million jobless and unemployed (not including those over 60 and housewives), meaning a broader underclass in Japan of around 12 million people.

The graphs below compare the economic status and living conditions of the underclass and other classes. Members of the underclass above age 60 who receive pensions are not included in the calculations. All these figures were calculated using the Social Stratification and Social Mobility Survey, which is conducted by Japanese sociologists once every 10 years. 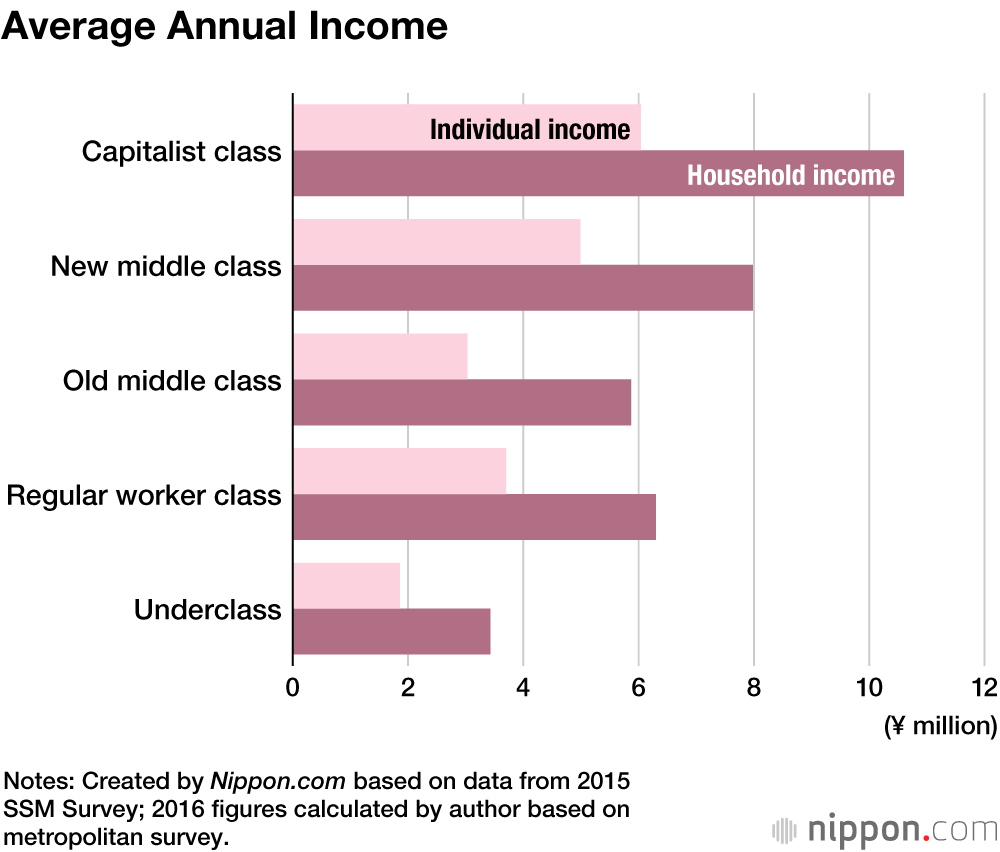 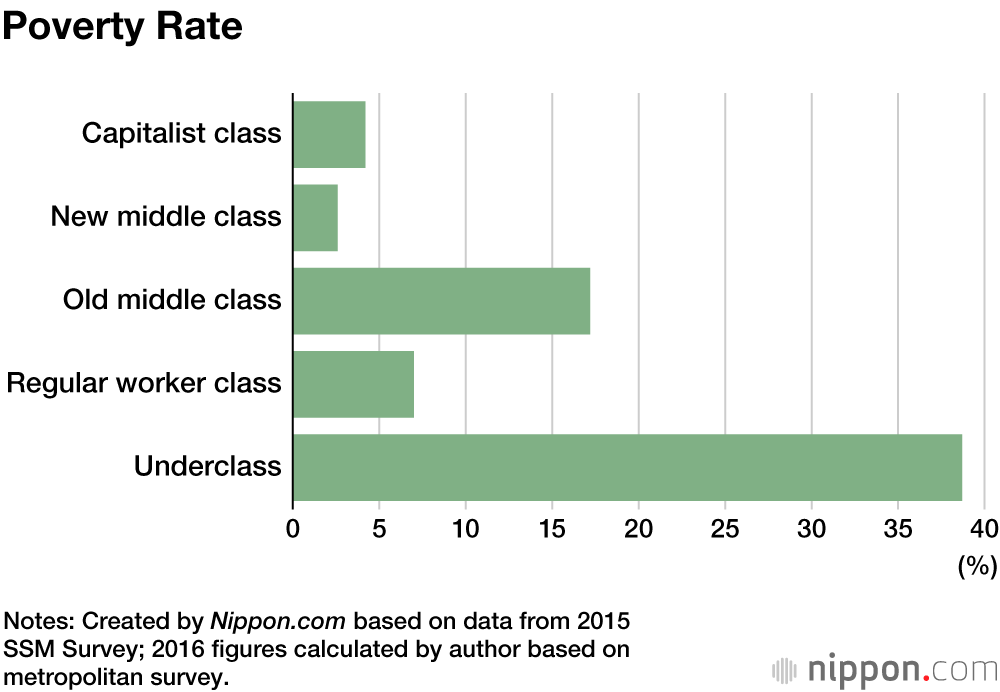 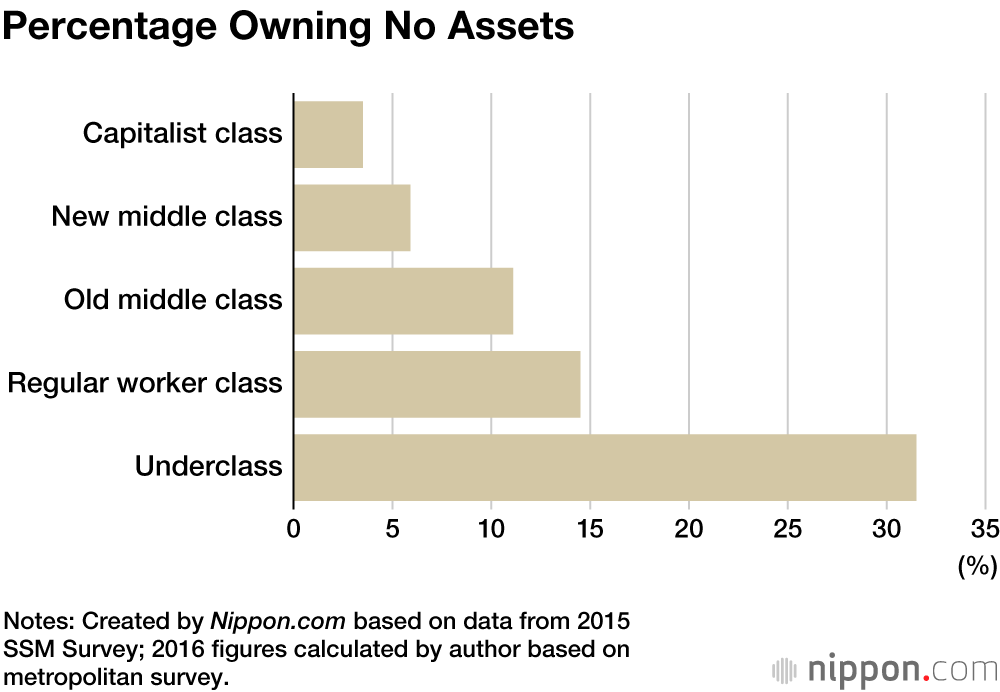 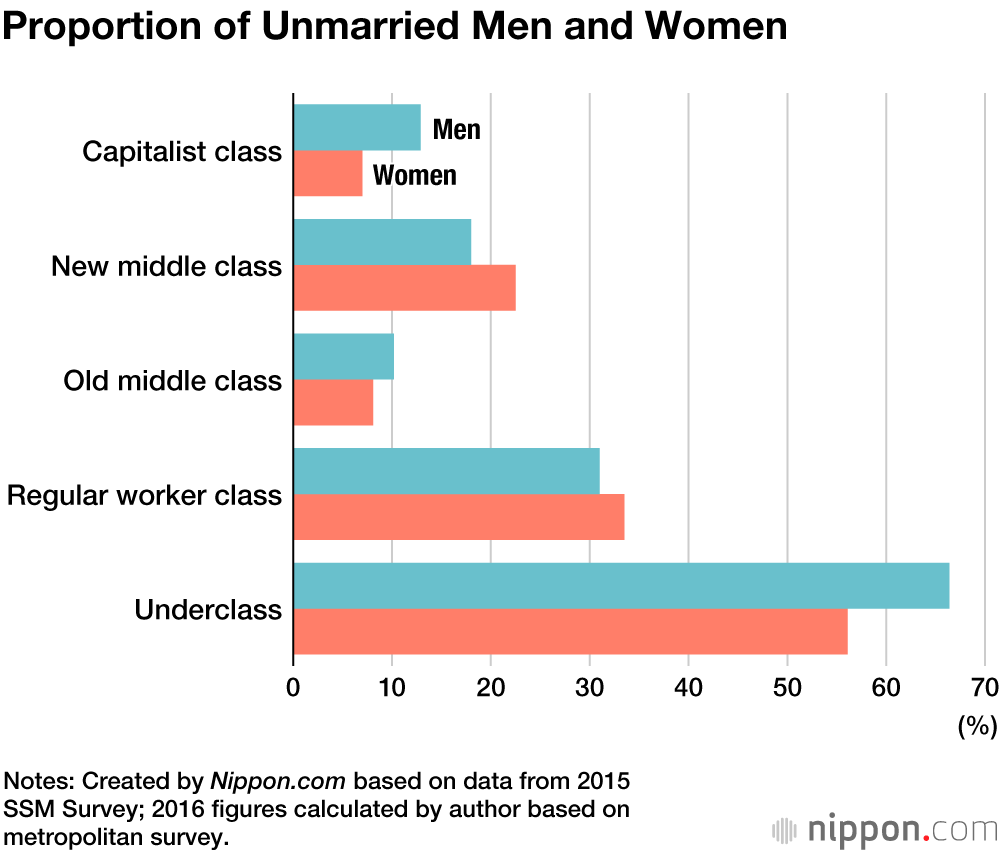 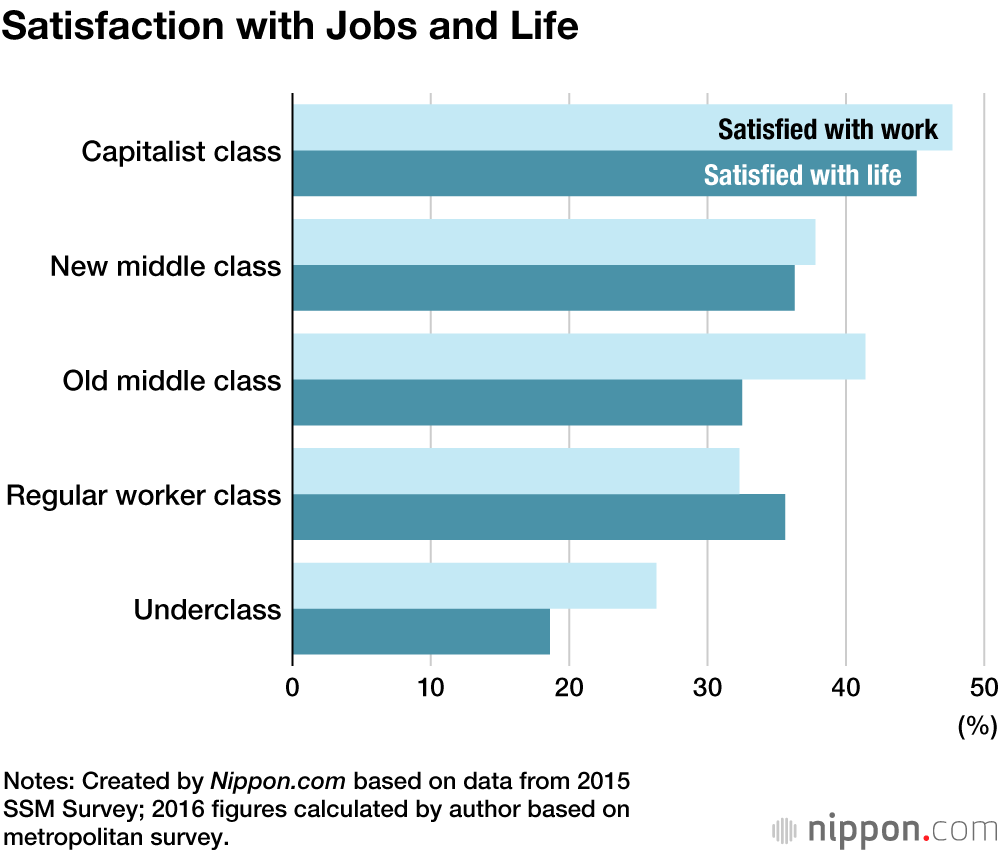 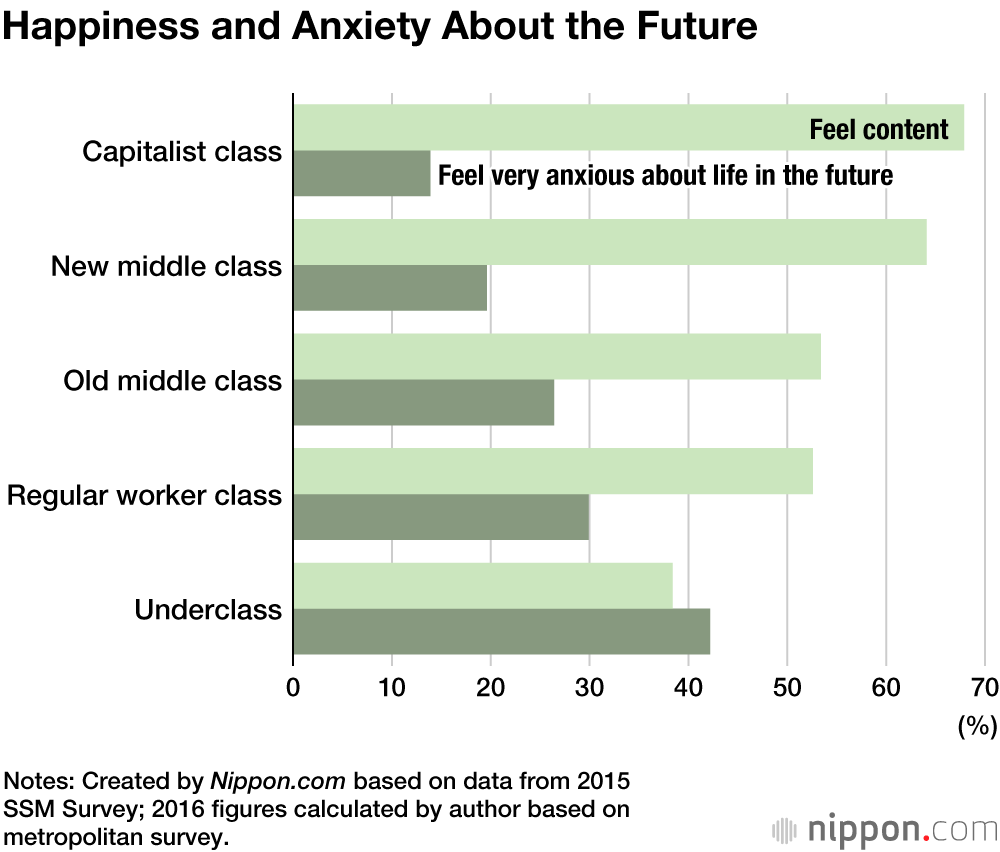 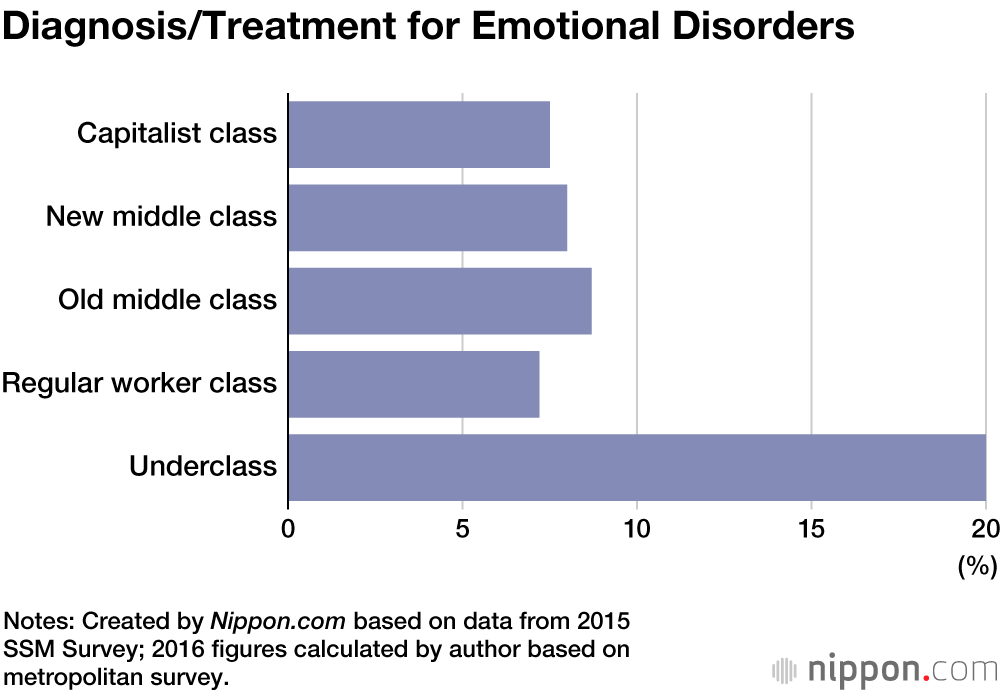 As the data above shows, individual annual income for the underclass is ¥1.86 million, with even household income rising to just ¥3.43 million. The actual poverty rate for this group is 38.7%, while fully 31.5% have absolutely no assets, including savings and real estate. Particularly shocking is the number of unmarried members of the underclass, with 66.4% of men and 56.1% of women having no experience of marriage.

In terms of the personal views of people in this class, the satisfaction rate with jobs is also noticeably low, and the people who feel they are happy are in the minority. Not surprisingly, more than 40% feel very anxious about life in the future. Some 20% of them suffer from an emotional disorder such as depression. The final graph does not break figures out by age, but the ratio goes up to 44% among underclass men in their twenties, who feel considerable emotional pressure. Added to this will be the young people who have become “employment refugees” in the ongoing pandemic.

Over the past 30 years, Japan has increasingly found itself saddled with unprecedented poverty-related woes, and its people plagued with insecurity and depression. Now the current COVID-19 pandemic is exposing nonregular employees to new threats. So long as the pain and insecurity suffered by these people is not eliminated so they can lead a secure existence, get married, and raise children, Japan’s future will look bleak.

It is difficult to move beyond the underclass under one’s own steam. Measures for the future must be taken quickly. The first thing that is needed is a large-scale increase in the minimum wage that will correct the discrepancy between those in full employment and nonregular employees.

In the European Union disparities according to type of employment are prohibited, and there are examples where, in compensation for unstable employment, the hourly wage for nonregular employees is set higher. In Japan, however, discrimination in treatment depending on type of employment is standard practice. Measures have started to be taken in recent years, but they are not yet sufficient.

In Japan, the national average for the minimum wage (which is set separately for each prefecture) is only ¥902, much lower than the average in the EU. The federal minimum wage in the United States is not high, at $7.25 (about ¥767), but there are quite a few areas where it is set higher, and progress is being made. Given the high prices facing Japanese consumers, the minimum wage in Japan needs to be raised to at least ¥1,200, and eventually to ¥1,500. This should enable even temporary workers to live comfortably, and even to raise children if there are two wage earners.

The current administration, however, is reluctant to take such measures. We need a government that is keener on reducing disparities and eliminating poverty, and that will adopt effective measures toward these ends, to stop Japanese society from sliding into poverty.

(Originally published in Japanese. Banner photo: Students milling around at an employment conference at Tokyo Big Sight, Ariake, Tokyo, during the employment ice age. Taken on March 14, 2000. © The Yomiuri Shimbun/Aflo.)