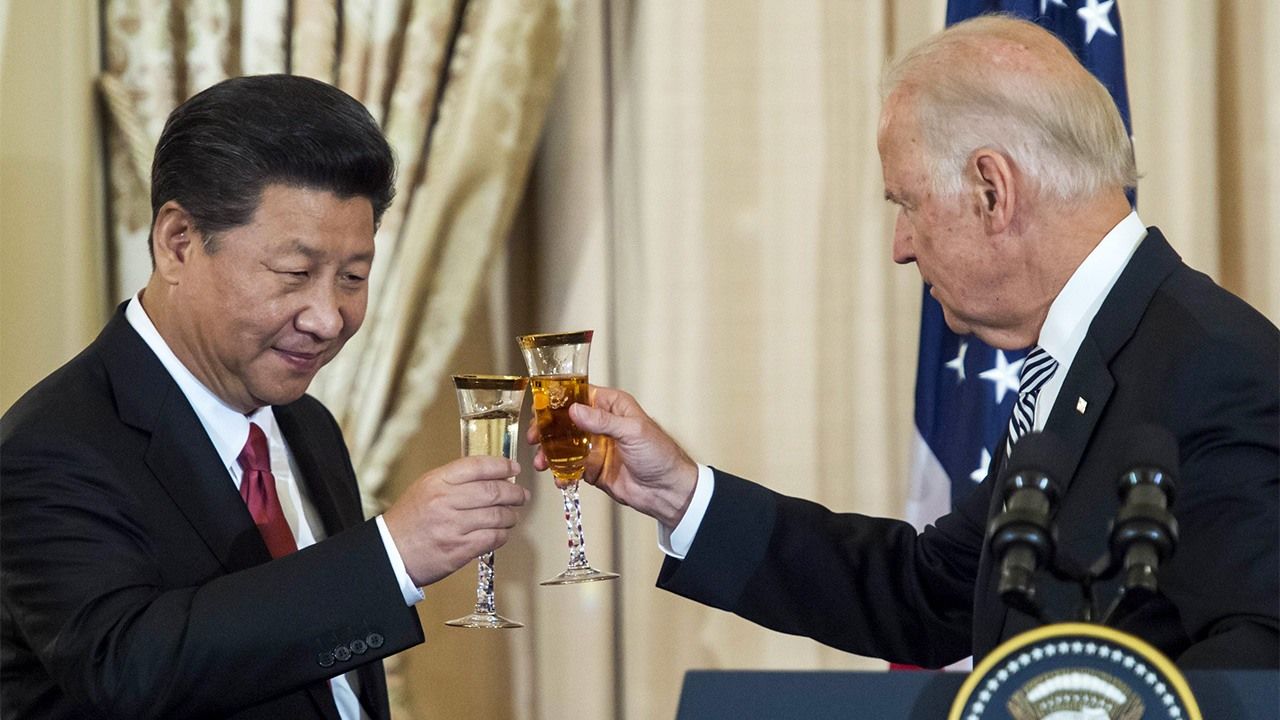 Handling a More Muscular China: Maritime Issues and the Potential for a Taiwan Crisis

Politics Society May 19, 2021
With its new Maritime Police Law, China has increased its intrusions into Japanese territory surrounding the Senkaku Islands. Will the sharpening of Sino-American tensions develop into full-blown confrontation or a Chinese invasion of Taiwan? Former ambassador to Beijing Miyamoto Yūji shares his thoughts about China’s behavior. 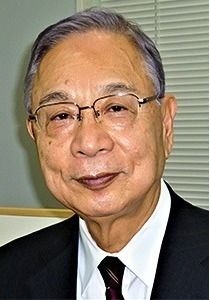 Chairman of the Miyamoto Institute of Asian Research, vice-president of the Japan-China Friendship Center, and chairman of the Japan-China Relations Academy of Japan. Joined the Ministry of Foreign Affairs in 1969. His diplomatic postings included serving as consul general in Atlanta and as ambassador to Myanmar. Was ambassador to China 2006–10. His published works include Kore kara, Chūgoku to dō tsukiau ka? (Moving Forward, How Should We Engage with China?) and Gekihen Myanmā o yomitoku (Deciphering a Radically Changing Myanmar).

China Seeking Control over the Senkakus

The situation deteriorated further in April 2012 when the Tokyo Metropolitan Government, led by Governor Ishihara Shintarō, announced that it would purchase Uotsuri Island and two other islands in the chain from its private owner. This forced the national government to preempt Ishihara by purchasing the land titles to the three islands itself.

Miyamoto Yūji, Japan’s former ambassador to Beijing, describes how an online article published by the People’s Daily in May 2012 signaled increased Chinese awareness of the need for China to quickly implement a maritime strategy to contest Japan’s control. At the time, notes the ambassador, “China officially lacked such a strategy, and responsibility for the exercise of maritime law enforcement powers was dispersed between organizations tasked with varying duties such as public safety, fishing, and customs. These organizations were subsequently unified under the China Coast Guard, which itself was then brought under the umbrella of the People’s Liberation Army. The Chinese government’s enactment of the Maritime Police Law earlier this year, which is directed at overseeing the operations of the China Coast Guard, represents the culmination of this strategy formation process.”

Ambassador Miyamoto explains that China’s basic goal is to undermine Japan’s effective control of the Senkaku Islands, which it regards as its own, by changing the facts on the ground and demonstrating that it is China that exercises effective control. In his view, this explains why China Coast Guard vessels are cracking down on the operation of Japanese vessels fishing in waters around the islands.

Furthermore, he observes that “China currently has the upper hand, while Japan is on the back foot. By strengthening its coast guard, China is looking to unilaterally alter the status quo by force and to make Japan recognize the changed reality on the ground. This is prohibited under international law, though, and is also a violation of the United Nations Charter and its requirement that members resolve their disputes peacefully. It’s only natural for Japan to be concerned about Beijing’s enactment of the Maritime Police Law.”

A Violation of International Law?

However, Miyamoto admits: “While the legislation runs counter to international expectations, it is hard to say definitively that it is a violation of international law.” Noting that the United States Coast Guard also possesses heavy weapons, he argues that the “authorization of the use of weapons in the China’s Maritime Police Law does not automatically mean the legislation contravenes international law.” The United Nations Convention on the Law of the Sea, or UNCLOS, which places restrictions on the types of operations military vessels can undertake in territorial waters of other countries, also allows countries to take enforcement measures against foreign warships in their own territorial waters.

The problem, says Miyamoto, is that the new legislation extends this ability to the broader “waters under Chinese jurisdiction,” while not specifically defining limits to those waters. “Of course Japan should criticize China and its vagueness on this point. However, China has its own legal interpretations and did not set out to purposefully violate international law. Furthermore, the mechanisms for deciding whose claims are correct are quite weak in international diplomatic practice, and the reality is that customary law is often settled through material actions taken by conflicting parties.”

The ambassador cautions that “the issue of international law is very delicate, and it is not always the case that Japanese opinion accords with international political understandings. That said, if Japan does not assert its claims, it will put itself in a disadvantageous position. That is why Japan must speak clearly and act in response to China’s moves.”

No Capitulation to Chinese Power

“If we demand discussions straightaway with Beijing over this, it is quite possible that Chinese domestic audiences will mistakenly conclude that its government was ultimately correct to push back against Japan over the Senkaku Islands. Instead, we should first strengthen the Japan Coast Guard, enhance coordination between the Maritime Self-Defense Forces and JCG, and begin conducting exercises in preparation for a worst-case scenario where we may need to invoke the Security Treaty with the United States. Only after demonstrating Japan’s resolute commitment to defending the Senkaku Islands as part of its own territory should the government initiate discussions. After all, all countries—including China—want to avoid the resolution of problems through the use of military force.”

Japan must not send the message that it has been silenced by China’s overwhelming military might, warns Miyamoto. “However, Japan refusing to talk to China on the issue as the PLA continues to build its military strength is also not good. Tokyo should ensure it retains robust channels of communication with China that allow it to speak forcefully. To the degree that it does not undermine US-Japan security interests, Sino-Japanese economic relations should also be strengthened. Japan should make the most of the Chinese market to revitalize its economy.”

The All-Out Confrontation Nobody Wants

The recent mid-March top-level consultations in Alaska appeared to show a deeply conflictual Sino-American relationship. Have the two nations settled on all-out confrontation? Miyamoto pushes back against this viewpoint.

“The United States’ confrontational stance towards China came after consulting and listening to its allies. Tokyo is being pulled in by the United States because of the importance placed on the Senkaku Islands problem by Japan and because of enhanced alliance Japan-US military cooperation. China is also off balance and is attempting to solidify its own global support base, as demonstrated by Foreign Minister Wang Yi’s Middle East trips. If this posturing continues, geopolitics will begin to resemble the US-Soviet Cold War era.

“A Sino-American Cold War is not in the interests of either China or the United States. I think President Joe Biden understands this. And given the major impact it would have on the American economy, there is no real desire to pursue full-scale decoupling from the Chinese economy.”

A Chinese Invasion of Taiwan?

Increasing concerns over a military crisis breaking out over Taiwan were recently illustrated by comments made by the head of United States Indo-Pacific Command. Testifying in front of the Senate Armed Services Committee, Admiral Philip S. Davidson implied that a Chinese invasion of Taiwan was possible “in the next six years.”

While China has recently gained the upper hand across the Taiwan Strait, Ambassador Miyamoto thinks that China does not take military action against Taiwan lightly due to the major negative global impact it would have on China’s international reputation and its economy.

He observes: “While the United States Navy’s Seventh Fleet has played an important security role in the Western Pacific and Indian Ocean, the regional military balance is developing in China’s favor. China’s military modernization has made it more difficult for the Seventh Fleet to carry out operations around Taiwan, meaning that we now need to consider the US-China cross-straits military balance while leaving that Seventh Fleet out of the picture.”

Reflecting on the Donald Trump administration’s progressive attempts to strengthen American relations with Taiwan, Miyamoto also says: “Beijing could not stand by idly. This explains why it raised the threat of a possible military invasion of Taiwan and escalated the intensity of military exercises in the Taiwan Strait, including sending the PLA across the median line between Taiwan and China. Comments by American military officials on possible Chinese military hostilities across the Strait were likely a result of these observations.” 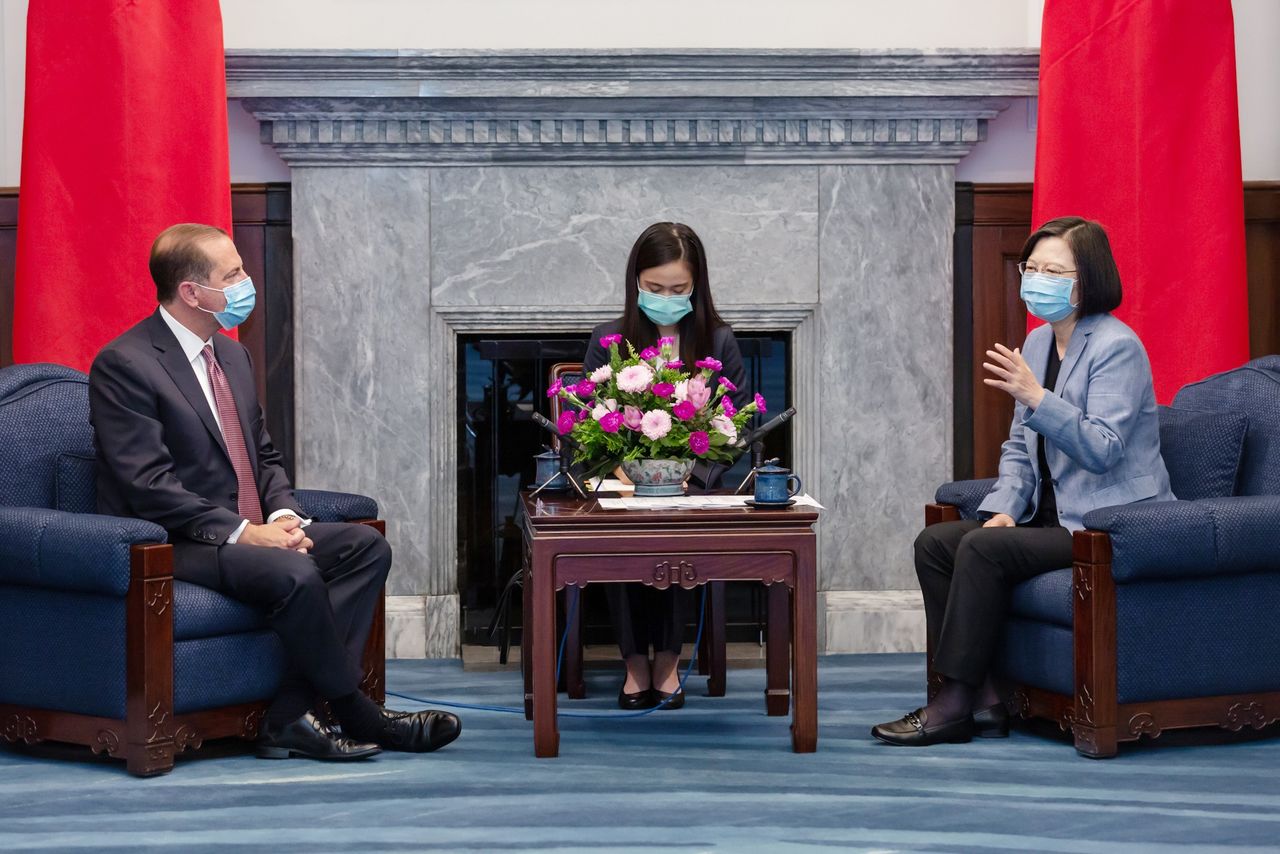 Taiwanese President Tsai Ing-wen (right) and US Secretary of Health and Human Services Alex Azar (left) meet in Taipei on August 10, 2020. Azar was the highest ranked government official to have visited Taiwan after the severing of official US-Taiwan diplomatic relations in 1979. (© Taiwan Jiji; courtesy the Office of the President, ROC).

While Miyamoto notes that some observers think “Xi Jinping may want to leave his mark on history by unifying Taiwan with the mainland,” he believes that the current administration in Beijing “would struggle to explain to the public a pressing need to mobilize the PLA. Only if Taiwanese independence appeared imminent would Beijing consider an invasion of Taiwan. However, Tsai Ing-wen understands this well and will not cross that line.”

He continues, “Taiwan is a major global producer of semiconductors, and a Chinese attack on Taiwan will send global stock prices plummeting and create chaos in the global economy. This will majorly impact China’s economy and could well lead Chinese people to criticize Xi and ask, ‘Why attack Taiwan now?’ For the average Chinese citizen, everyday wellbeing is the top priority, and Taiwan is not as important.”

Noting the recent comments by the head of the US Indo-Pacific Command, Admiral Davidson, Miyamoto says that the “the reference to six years is very meaningful. The United States is likely thinking of using that time to equalize the military balance across the Taiwan Strait—and the likelihood is high that Washington will be making additional military demands of Tokyo.”

Can the World Coexist with China?

The strategic encirclement of China has widened recently as the United States and Europe consider implementing sanctions due to China’s human rights abuses against the Uighurs in Xinjiang Province. I ask the ambassador whether the world can coexist with China.

“Xi Jinping has repeatedly emphasized that China is a supporter of, not a challenger to, the current international order. He has also said that China will comply with international law embodied by the spirit and principles of the UN Charter. The PRC initiated radical reform of a system where imperial dynasties had ruled for thousands of years, and its leaders have continuously struggled to improve governance in China. The issue is how the world can steer China towards joint creation of a new international order. This requires that we treat China in line with its rising power within the international system.”

The ambassador also pushes back against the view that coexistence with a fundamentally different China is impossible, so we must resist China and topple the CCP. “To the degree you follow through on this logic,” he notes, “you will engender increasingly desperate Chinese resistance. This will exacerbate China’s existing antipathy for the international community. I want to avoid a future where our grandchildren will have to deal with that kind of China.”

Ultimately, Miyamoto believes it is better to “face and debate China head on after incorporating it into the existing order and direct our efforts towards realizing a new stable accommodation with China.” He also believes that “Japan has a particularly important role in encouraging China in such a direction.”

While Ambassador Miyamoto says that “Japan needs to express its position clearly and directly” if China does something inappropriate, he also thinks Japan should be mindful about imposing itself on China. “We can only hope that China will respond to our appeals. Ultimately, what China does is a matter for the Chinese people to decide. Japan needs to avoid taking actions that emotionally antagonize the Chinese publicthereby provoking a major backlash from the Chinese government.”