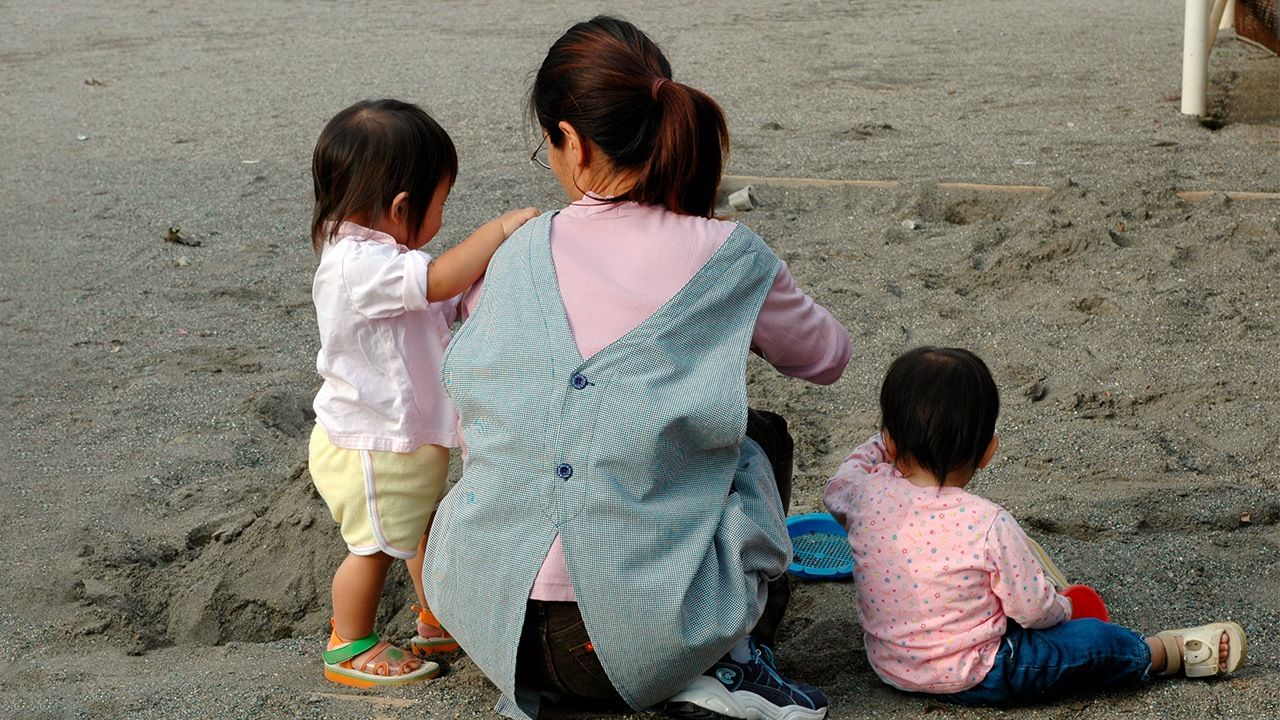 Society Lifestyle Family Work Health Jul 8, 2021
“Maternity harassment” is becoming a problem in child daycare facilities where there can be an unspoken understanding that junior employees should not take maternity leave before their seniors, or where a worker may be berated for daring to become pregnant. These kinds of issues reflect structural problems in the environment for female daycare workers.

“How Irresponsible of You!”

There is an unwritten “order of pregnancy” based on years of service in some of Japan’s daycare facilities. In workplaces where there are many women, there can be unspoken but strictly enforced hierarchies leading to cases of women being treated badly because they got pregnant “out of turn,” before their seniors.

An event that should be cause for congratulations is all too often considered an annoyance in the workplace. When Nishino Keiko (pseudonym, 35 years old), the director of a daycare center, reported her pregnancy to the male owner of the facility, he berated her in exasperation. “How irresponsible of you,” he said, “when you’re the daycare director.” This is a typical case of “maternity harassment,” the unfair treatment and other forms of abuse in the workplace of a woman who is pregnant or has given birth.

The licensed daycare where Nishino worked already had numerous problems. The pay was low and the turnover of childcare staff was high. The shortage of workers meant more overtime work for those who remained. This facility supposedly had an 8-hour workday and two days off every week, but the employees who quit were not replaced and those who remained worked 12 hours or more a day, only getting one day off per week.

The daycare owner blamed Nishino for the high turnover of workers. After all, she was the director. When she told him she was pregnant, he was furious. “You’ll just have to keep working. No days off. And no maternity or childcare leave either!” The Labor Standards Act stipulates that pregnant female employees can ask to be given less demanding work and must not be made to work more than 40 hours per week. Nishino was given none of this consideration.

When her long hours of work brought Nishino to the brink of giving birth prematurely, she was forced to take maternity leave earlier than expected, and ended up leaving her job completely. Nishino’s story of maternity harassment is by no means unusual in the field of child daycare.

One of the factors contributing to maternity harassment is the critical shortage of daycare workers. In my research I have come across a case in which a junior worker who had only been with her facility for a few years became pregnant, making the daycare director so angry that the worker and her husband actually had to visit to apologize for her pregnancy. Of course, this kind of atmosphere does not extend to all workplaces in Japan, but it is clearly evident in professions with large numbers of female workers, such as nurses and teachers. Why is it that in a workplace specifically for childcare, pregnancy and childbirth are not welcomed as the felicitous events they should be?

According to a 2018 survey of daycare workers conducted by the Tokyo metropolitan government, 17.8% of those who quit—nearly one in five—said that they left their job due to pregnancy and childbirth.

Among the multiple reasons given for quitting, “low wages” ranked the highest at 65.7%, followed by “heavy workload” at 61.9%. The average monthly salary for daycare workers is as much as ¥100,000 less than the general average across all industries, a rate too low for a critical job caring for young lives. High turnover means there is a chronic shortage of workers, a situation that leads to abuses such as maternity harassment.

In a survey carried out from April to June 2020 by Zenrōren, the National Confederation of Trade Unions, 20.2% of daycare workers reported that they were compelled to work overtime hours, from which they should have been exempted, because there was so much to do and no one to do it.

In response to the growing number of children waiting for placement in crowded daycare facilities, the government sought in fiscal 2013 to implement measures enhancing pay for daycare workers. This led to some improvement, with salaries in the field going up by an average of ¥44,000 per month compared to fiscal 2013 levels. A veteran daycare worker should now be earning at least ¥84,000 yen more per month than before.

If wages were being paid as envisioned by the Cabinet Office, which implemented the measures, the highest annual salary for a midlevel childcare worker in central Tokyo, where the minimum wage is the highest, would be ¥5.65 million. The reality, however, is that the average annual salary has never exceeded ¥3.81 million, according to a fiscal 2019 Cabinet Office survey.

National government subsidies are premised on the calculation that salaries account for more than 80% of daycare operating costs. Daycare facilities seeking to make a profit will seek to cut their labor costs. According to a survey by the Cabinet Office, the national average labor cost ratio for licensed nursery schools operated by social welfare corporations is 75.7%, but for those operated by for-profit corporations, the ratio is only 59.2%. In urban areas, where commercial companies are rapidly entering the market, the tendency to squeeze out more profit by cutting labor costs is greater, and the average labor cost ratio of for-profit daycare facilities in Tokyo is about 50%. No matter how much the government seeks to improve the treatment of childcare workers, their wages remain low. This situation is never going to improve so long as management is motivated to cut labor costs.

There is also a structural problem that works to keep daycare worker salaries low. Daycare facilities are allowed, to a certain degree, to divert some of their personnel costs to other budget categories. This means money intended for salaries can be used, for example, to expand the business, if certain conditions are met.

The opposition parties in the Diet have repeatedly demanded that limits be placed on operating expenditures and that strict review policies be implemented to prevent this, but the ruling parties have dragged their feet about imposing controls, perhaps because they receive contributions from the daycare industry. Without regulations limiting this diversion of funds intended for personnel salaries, though, for-profit daycares are not just likely to keep the salaries they pay to individual workers low; they are also apt to reduce their spending on new hires that could ease the labor crunch in this industry.

The standard for the number of children who can be looked after by one daycare worker was set in the early prewar years, but the resulting number of adult carers in the facilities has long been criticized as insufficient. Now more than ever, there is a need to reduce the number of charges assigned to a single daycare worker. And if that is too difficult, there should at least be provisions for subsidies to hire substitute personnel while workers take time off for maternity and childcare leave, and to allow for flexibility in assignments for pregnant workers and those returning to work after taking extended leave.

There are indeed some daycare facilities with ample funding for personnel, allowing them to hire more than the required minimum of workers and spread out the workload. Daycare workers at these kinds of facilities can continue their careers even after getting pregnant and having children.

In many industries, including the childcare field, both labor and management tend to lack knowledge of labor-related laws. Providing more opportunities to learn about the provisions for maternal healthcare and protection in the Labor Standards Act, the Equal Employment Opportunity Act, and other legislation would help to reduce incidents of maternal harassment.

Daycare facilities are intended to provide care and education for small children in support of their parents and guardians. The daycare worker fulfills a highly specialized and important role in childcare. The quality of this care depends to a great extent on how rewarding and fulfilling daycare workers find their jobs and the payment they receive for them. In the current atmosphere, which disparages their specialized skills and offers them little respect, there can be no resolution of the problems that force a worker to be apologetic for getting pregnant.

The problem is one shared by all women workers. Explain that you are pregnant and you are met with grimaces. Pressured to work without provisions for special care, you run into complications that threaten your pregnancy. Frustrated, you become depressed after childbirth. The repercussions are felt by everyone in the family as cases of child abuse increase. Government systems for working women and childcare are not keeping up with the rapid influx of women into the labor force, and widespread lack of public awareness is making all of society vulnerable.

When a woman who desires to have a child cannot give birth happily, there can be no happiness for her children or family—nor, for that matter, for society as a whole. If Japan is to address its plummeting birthrate and subsequent deterioration as a nation, it must absolutely provide a kinder environment for women to care for their needs throughout their pregnancy and during the years they are raising their children.

(Originally published in Japanese on June 3, 2021. Banner photo: A daycare worker and her charges. © Jiji.)