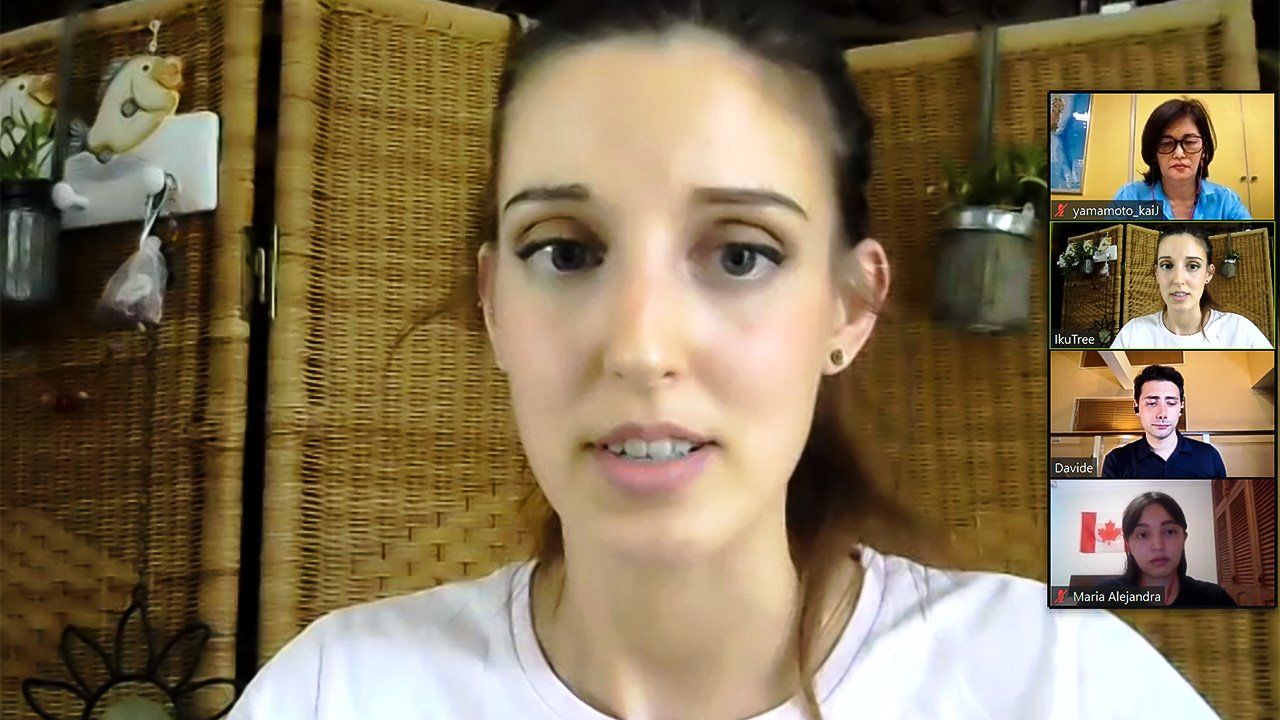 Society Education Politics Aug 5, 2021
Even as Olympic personnel flood into Japan, the government continues to prohibit the entry of international students, regardless of their country of origin or vaccination status. Now they are making their voices heard.

As many as 25,000 international students have been denied entry into Japan under COVID-19 border measures that many regard as unscientific and unfair. Yet Japanese immigration authorities continue to issue certificates of eligibility and accept student visa applications without providing any indication of when or if those students will actually be permitted to enter. The policy has left thousands in limbo, unable to move forward or backward.

Criticism of Japan’s treatment of international students is mounting, as those affected by the entry ban take to social media to share their stories and demand answers from the Japanese government.

A Sense of Injustice

On June 24, comedian Mitsuura Yasuko announced that she would soon be traveling to Canada to study, fueling criticism of Japan’s closed-door policy. Japan is presently the only member of the Group of Seven that denies entry to the vast majority of international students.

“The United States, Britain, and other popular destinations allow most documented foreign nationals in for purposes of study, provided they test negative for the coronavirus and follow the prescribed quarantine procedures,” notes a spokesperson for a major Japanese study-abroad agency. “American universities are resuming in-person classes, and many offer round-the-clock walk-in testing and vaccinations, so we’re expecting a big bump in Japanese students traveling to the United States this summer.”

Japanese border measures currently in effect ban all new arrivals—regardless of country of origin or vaccination status—except under “special circumstances.” Students are covered by that ban, but the tens of thousands of foreign nationals pouring into Japan for the Tokyo Olympics are not. (In fact, they are exempted from the quarantine and self-isolation requirements imposed on Japanese nationals and permanent residents re-entering Japan from abroad.) The injustice rankles.

Most of those raising their voices against the government’s current policy are university and graduate students who prepared long and hard to come to Japan, where they planned to hone their language skills and carry out advanced study as an important step toward their career goals. Many hoped eventually to find work at a major Japanese corporation. In short, they are precisely the sort of “high level” international talent that the Japanese government claims it wants to attract. Now quite a few are considering alternate destinations.

Any foreign national wishing to enter Japan for purposes of study must first obtain a certificate of eligibility from the Ministry of Justice; this is typically managed through a sponsoring Japanese language school or other educational institution. The student then submits the COE to the local Japanese embassy or consulate along with other required materials to apply for a student visa. Receipt of the COE is widely taken as a green light to begin preparations for an extended period abroad, including transportation and housing arrangements.

Figures compiled by a group of six associations representing Japanese language institutions and programs—where the vast majority of international students enroll—suggest that as many as 25,000 incoming students were left in the lurch by the Japanese government’s entry ban (briefly lifted from October to December last year). These were people who had worked and saved, sometimes over a period of years, to follow their dreams. Having received their COEs, and in some cases their visas, many had quit their jobs and given up their apartments in preparation for an extended stay abroad. Some have now been waiting more than a year in a state of uncertainty. Others have lost their scholarships, or their patience, and made other plans.

Maria Alejandra, a Colombian graduate student majoring in law, is among those who have shared their stories through online interviews posted on the website Education is Not Tourism. (Maria has also created “Seeking entry in Japan,” a Facebook page for students, workers, and spouses trying to make it into the country.)

Maria became interested in Japan as an exchange student in Canada. Having witnessed violence and social chaos as a child growing up in Colombia, she was intrigued to hear of Japan’s low crime rate and war-renouncing Constitution, and she made up her mind to learn more about the country’s legal system and culture. In October 2019, she was accepted as an exchange student at a Japanese graduate school, and in February 2020, she received her COE. She had already booked her plane ticket and paid a deposit on her lodgings when the pandemic hit. Airline flights were canceled, and shortly thereafter Japan closed its borders.

Almost two years after Maria first applied to study in Japan, she has no idea when or if she will be able to go there. She sees her peers getting on with their careers and feels left behind. She feels strongly that she has a significant contribution to make, not only to her own society but also to Japan. But at the age of 24, she is not sure she can keep her life on hold much longer. 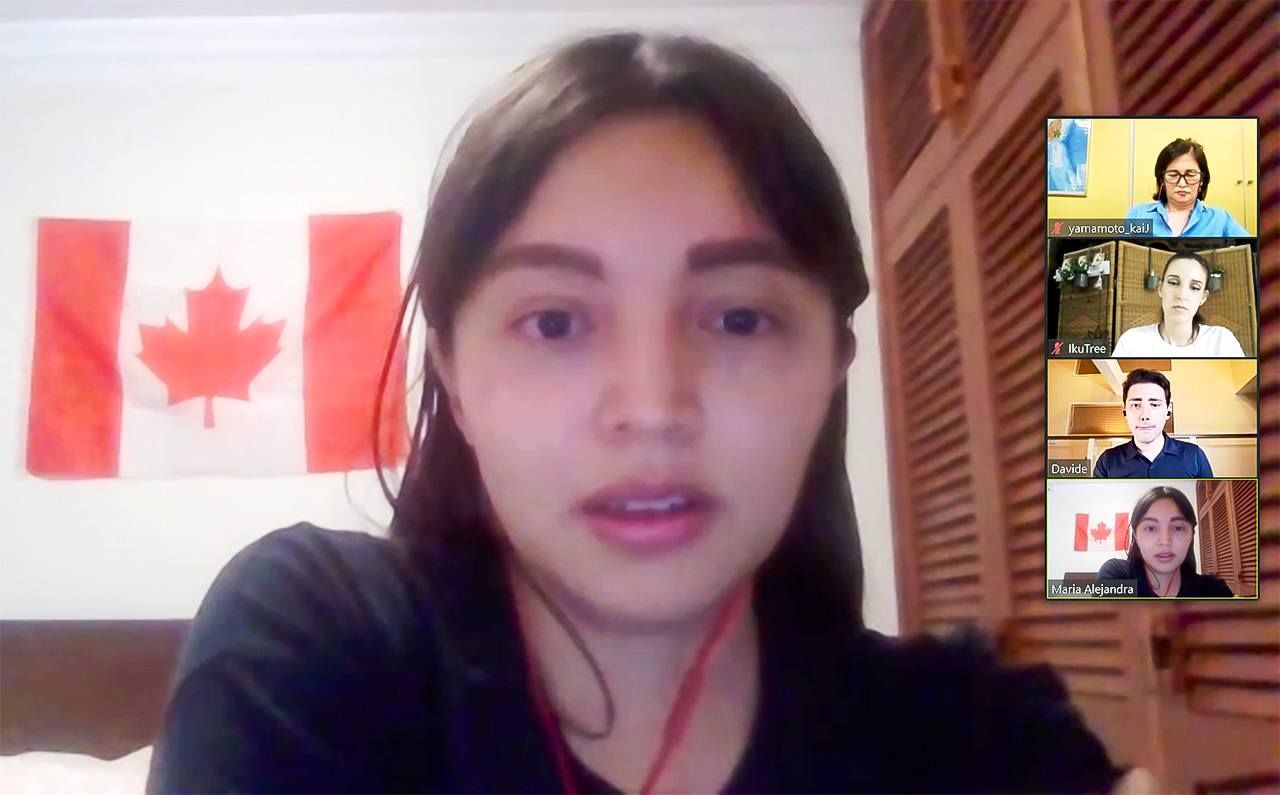 Belgian illustrator Iku Tree has also been waiting to study in Japan for over a year. Enchanted by Japanese manga and anime, Iku set her heart on studying Japanese and learning about the culture first-hand. To pursue that dream, she saved up her money, enrolled in a Japanese language school in Tokyo, and applied for and received her COE. She booked a plane ticket for the end of March 2020. In preparation for her departure, she put down a deposit on lodgings, sold off all her furniture, and put most of her other belongings in storage. When her flight was canceled and the borders closed, she was stranded in Brussels in an empty flat. “I didn’t even have spoons to eat with,” she recalls with a rueful smile.

But the hardest part has been “living on standby,” as months have passed without a word of helpful information from the Japanese government. “It’s impossible to live your life without knowing where you’re going to be in a month,” she says. “It really does take away your sense of purpose. . . . You’re just stuck.” She fears her career has stagnated while she waits for life to resume. But she insists that she still loves Japan and that she longs to join her classmates and breathe the Japanese air.

No Substitute for the Real Thing 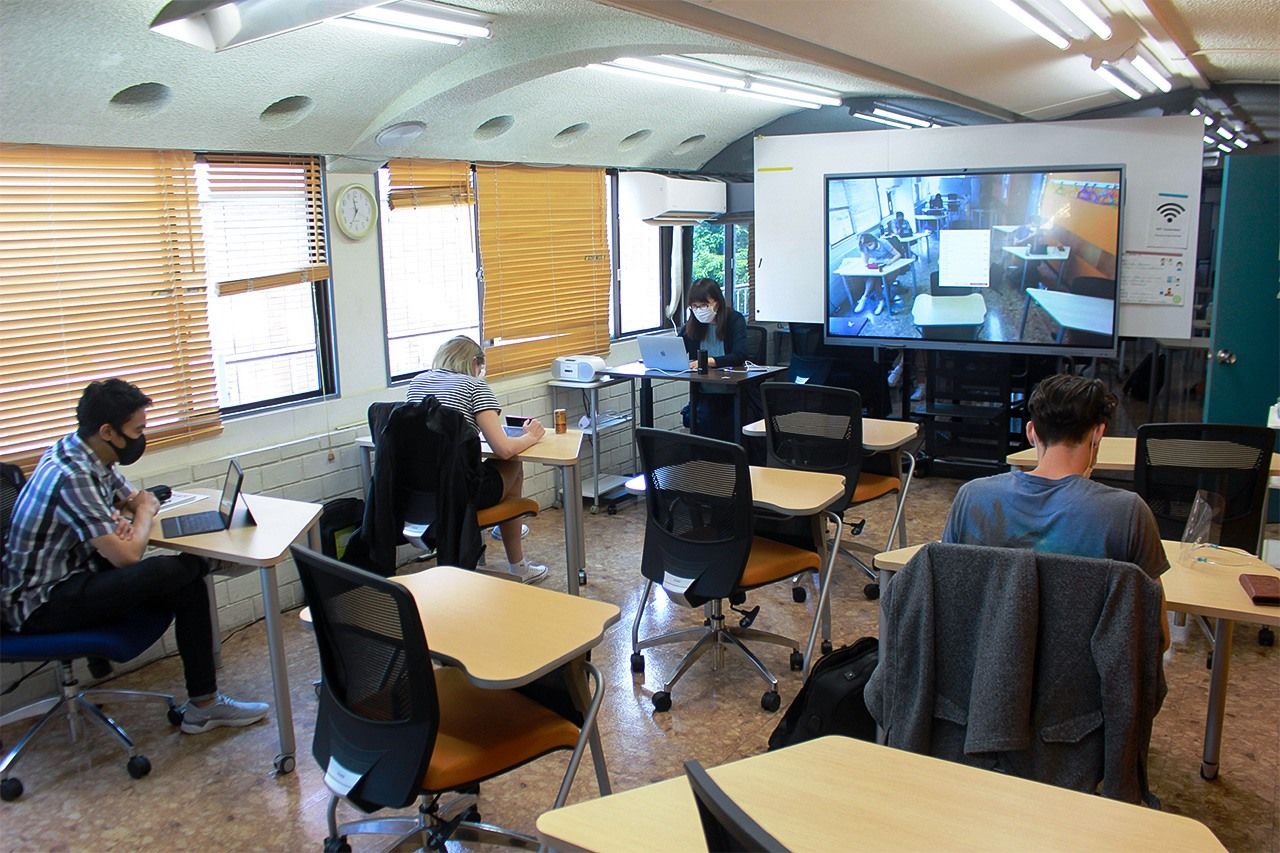 Only 3 out of 12 students showed up in person for this class at KAI Japanese Language School in Shinjuku, Tokyo, where online instruction has become the rule.

Maria and Iku have both taken advantage of the remote-learning tools offered by their Japanese schools, but online classes are no substitute for living and studying in a foreign country. Furthermore, the time difference alone can pose serious challenges to remote learning, especially for students living in the Americas. Maria had classes from 9:00 pm to 11:00 pm, local time, and again from 2:30 am to 4:00 am. Then she had to get up at 6:00 am to get ready for work. The physical and mental toll of this routine was such that she was obliged to take a leave of absence.

Students like Maria and Iku say they fully understand the need for rigorous pandemic precautions—including vaccinations, repeated testing, quarantine, and self-isolation—and are willing to do whatever is required of them, before and after arrival. But they question the science behind a blanket ban on students and ask why they are locked out even as tens of thousands of athletes, coaches, and reporters pour into Japan for the Olympics. As Maria puts it, “Allowing legal immigration, even in times of a global pandemic, is possible if you have the appropriate control methods.”

Voices of the Abandoned

One of Japan’s most active advocates for international students is Yamamoto Hiroko, founder and president of KAI Japanese Language School in Tokyo, established in 1987. Like other Japanese language schools, hers has taken a severe hit as a result of the entry ban.

“Before the pandemic, we had about 210 students,” she says. “Now we have about 120, and 20 of those are studying remotely from their homes overseas.” About 60 more students—many of them engineers, teachers, and researchers—have signed up for the term beginning in October 2021 and have received their COEs and visas. They are still waiting to find out whether they will be able to attend classes in person, though.

The likely impact of further delays can be gleaned by the following student comments, compiled through a questionnaire survey distributed by Yamamoto and other Japanese-language educators.

I have been preparing myself for my great adventure all these years, and it is a great burden to see how day after day passes without knowing if I will be able to enter, living in limbo. (Age 25, Spain)

If there is further delay for students in terms of visas, then I will effectively lose my scholarship and chance to visit and study in Japan altogether. My current scholarship accounts for stay, tuition, and stipend and was the only reason I could possibly come to Japan. (Age 22, India)

My university only allows third years to study abroad, meaning if I missed this chance I would never be able to study abroad again. This is in spite of the fact that I’ve put countless hours into studying Japanese all by myself. When I think of all the years I’ve put into this goal going to waste, I feel like crying. (Age 20, England)

If there is another delay for international students to enter Japan I will be devastated. The only reason why the athletes are coming to Japan is because Tokyo is hosting the Olympics. If the Olympics were being held somewhere else then that’s where the athletes would be going to. International students are coming to Japan because they love and respect the culture. (Age 29, United States)

Another delay means my language studies will suffer. I will have to take online courses during the night while working all day. My life will continue to be put on hold. (Age 21, Canada)

But beyond the impact on individual lives, the Japanese government’s failure to make reasonable accommodations or even issue conditions and guidelines for students seeking entry threatens to damage Japan’s international standing.

“Many of them saved and studied for years to come study in Japan,” says Yamamoto. “Some of them burned their bridges back home—only to be denied entry. But they’re still determined to learn. I am so impressed by the drive and commitment of the students taking our online classes. They’re a precious asset to Japan, in my view, and we need to deal with them in good faith.”

We have all heard a good deal about the impact a year’s delay can have on the career of an Olympic athlete. A year in the life of a young international student is of no less value, and it is time the Japanese government acted accordingly. 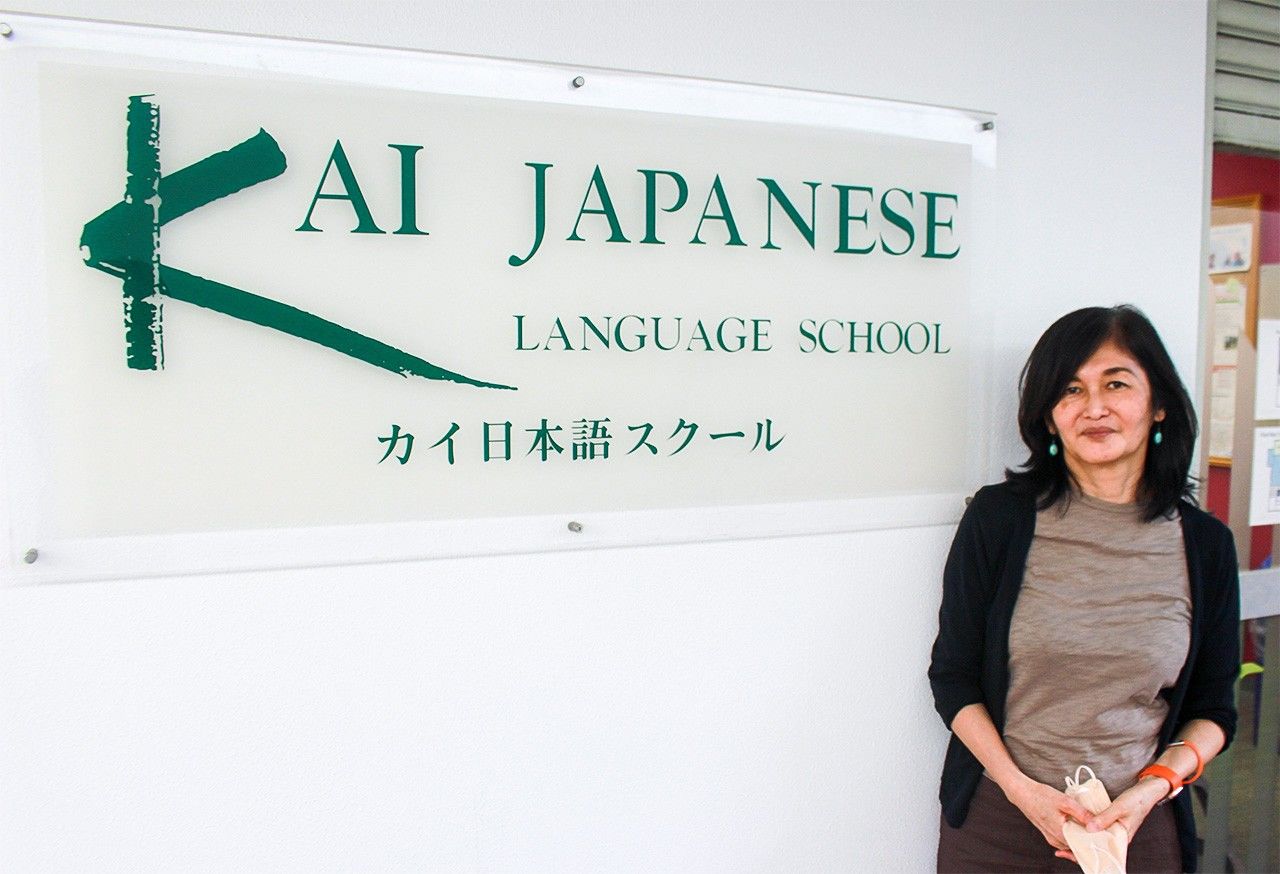 (Originally published in Japanese. Banner photo: Freelance Belgian illustrator and manga devotee Iku Tree has been “living on standby” under the Japanese government’s indefinite ban on the entry of international students. All photos by the author.)